Dale Hodgins
Posts: 9002
Location: Victoria British Columbia-Canada
676
posted 7 years ago
In many solar homes, the quantity of south facing glass is just fine during the heating season, but it can be a bit much during the heat of summer. External blinds work well to prevent the entry of unwanted light. Trombe walls can totally or partially block light. They are generally solid and not moveable.

With the addition of a simple rack, the space in front of any window could be turned into a firewood Trombe wall. The best time to fill the rack would be at the end of the heating season or whenever the windows start receiving more than the desired level of sunlight. Wood could be brought in all at once or the wall could be built gradually as the need for shade increases. This wood will shed moisture and provide some evaporative cooling until it reaches the same moisture level as the house.

Another stack of wood could be built on the outside of the window. Being against a south facing wall and under the overhang, the wood will dry in record time. The best way to prevent overheating is to block sunlight before it enters the home.

I like the look of firewood. This system puts the wood on display and therefore only the nicest wood that is bug free should be used. I have lots of maple coppice and cottonwood that would work well. Extremely aromatic wood is likely to be overpowering in an enclosed space. For me, the ideal height would be about 4 ft high. This allows a view over the wall.

The wood could be burned whenever the room begins to need more light as fall progresses. I would always have a separate stash of wood in the garage and some near the stove, so that the wall could be kept intact for as long as desired.
lorance romero
Posts: 39
2
I like...

Wood can catch on fire, just like curtains, sofas and other household contents. 15 or 20 ft. should be more than enough distance from the stove.

posted 7 years ago
Is there any risk, while stacking or removing the wood, of it going crooked and hitting the glass?

We originally made some of our rooms with 100% glass towards the exact south, but they cooled too fast on winter nights and got overheated -- not so much in midsummer when the sun is high, but worse in 3 seasons when the sun is lower, especially in winter when you're wearing long underwear and sweaters.

So the second year we added phony half trombe walls. Phony in the sense that they are not sealed to the glass. They have a gap of 4 to 6 inches between them and the glass. This means we can easily run curtains including behind them when necessary. 6 inches is better than 4 for occasional cleaning of the glass and sweeping of the bottom.

Patricia Ramirez
Posts: 19
Location: Sioux Lookout, ON
posted 7 years ago
We incorporated a trombe wall into our cob cottage. Our design features three vent holes at the top and bottom of the south facing wall minus the black backing (just never got around to finishing it). The photos included is of the final natural plaster coat we put on this summer without the glass window attached. And the second photo is of the window attached (no plaster) this photo is about 2 yrs old. Since we don't live in the cob and the trombe wall has not been completely finished we can not tell if there are any benefits. But I could feel the pressure of cool air coming through the bottom vents in the summer. Never thought of using firewood stacked in front of or inside of the trombe wall.
P1020650.JPG 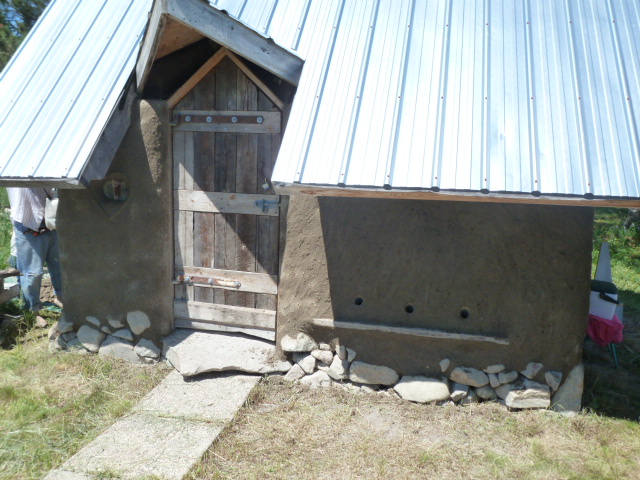 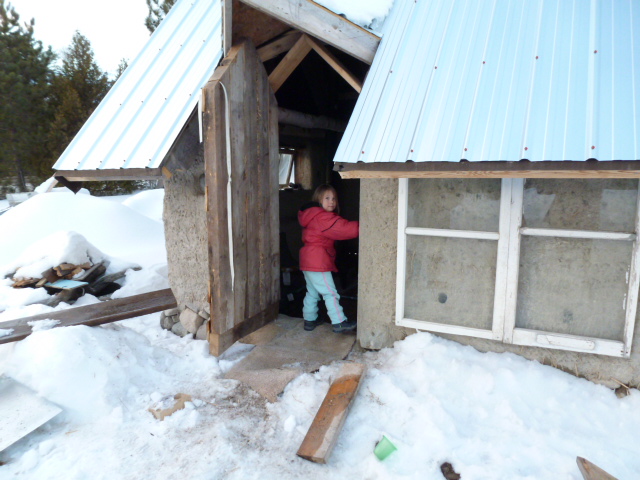 Dale Hodgins
Posts: 9002
Location: Victoria British Columbia-Canada
676
posted 7 years ago
That's a sharp looking cottage. I see two spots where the cob is vulnerable. You may have already put some plaster where the snow has accumulated. Linseed oil applied to the bottom couple feet of cob is helpful in repelling some moisture. I like the way metal roofs shoot the water well clear of the building. Your short walls with a good overhang are likely to prevent splash back from reaching the lower wall. The cob to both sides of the door is vulnerable to rain in the photos presented. Again, this may be something that you've already addressed. If well maintained, that little girl's grand kids could end up playing in the cottage.

Rebecca --- I would either stack the wood so close to the window that it can't fall, or stay back a couple feet so that a chunk that gets knocked off is unlikely to reach the glass.

Patricia Ramirez
Posts: 19
Location: Sioux Lookout, ON
posted 7 years ago
Thanks for the input Dale. Although we weren't able to 'live' in this cob building, we did monitor it throughout the four seasons. In winter, the snow sheds off the roof really well (too well in my opinion). The picture is a little misleading in that the snow is not up against the wall at all. It's the accumulation of the roof-shed snow, which is about 2' from the wall. Some of the snow did sluff off the berm and into the wall but, at most, it was only about 4" high. So it never got to the height of the cob.

Believe it or not, we are still getting backsplash on the cob. Most of the time it's not enough to worry about, but towards the end of winter, when the berms are about waist high, it starts getting warm enough to melt snow on the roof. The water that runs off, hits the berm and splashes the wall. I'd like to leave the berms as they are because I think they deter snow drifts from piling up agains the wall, but due to the backsplashing I may have to knock them down, at least part-way.

Good eye on the sides of the doors. We did get some slight erosion on the cob, from the water. It wasn't due to direct rain, but from poor construction on my husbands part. The dormer, at the lower corners weren't properly made up which permited water runoff to dribble below the roof and drip right onto the cob. He has since fixed this issue.

We are very aware of the dangerous metal roof edges and corners. We still need to install metal trim around the entire building, but I think the corners at the door still need additional protection. Possibly posts coming straight down? Or pony walls on each side of the door? Not sure yet.
Dale Hodgins
Posts: 9002
Location: Victoria British Columbia-Canada
676
posted 7 years ago
Water that dumps onto pea gravel doesn't splash much.

Patio door glass or other tempered glass leaned against a cob wall in winter will protect the wall from backsplash and keep the wall warmer on sunny days.

A fence made of fine fish net that is placed in the splash zone. Will work like those Japanese chains that bring water safely to the ground without splashing. Grow peas on it.