Chris Stallings
Posts: 6
Location: Shelbyville, Tn
posted 7 years ago
So, first and foremost...hello to all the folks on permies and thank you in advance for the advice you are sure to give to a newcomer as he endeavors to lower his electric bill, better protect his family and become a more self sufficent human being. My first topic of choice is an idea I've been throwing around and I wanted to get some advice from people who have a lot more expierence than I do concerning RMH and thermal masses. The general idea is to build a shed/room/shop where a RMH and thermal mass would be housed outside the family residence...it would be close by but not "attached" to the dwelling. This room would be heated beyond comfortable limits and the heat from this room would be carried to the family home through the use of standard ducting (possibly buried piping of some sort to help with insulation) by small booster fans that would normally be used to help circulate air through duct work of larger houses. These fans would run off a thermostat to be able to control the comfortable temperature inside the home. I like the idea of incorperating a thermal mass into the design to prevent having to feed the "J" tube (the design I'm most familiar with) every hour or so to keep the room at adequate levels of heat to feed the main house say through a normal cold night here in southern, middle Tennessee. Granted that's well below the normal cold of the northern part of the country but I'll freely admit I'm a big sissy when it comes to cold weather. This room would be insulated with salvaged but commercially available materials...most likely left over spray foam insulation from some local agricultural building projects where they bought more than they needed and would just throw the excess away and would be made out of locally available materials such as cedar post cut from my land and tin roofing panels from aforementioned projects. Flooring would most likely be dirt floors for the time being but would eventually be updated to a cement slab. I'd like to see the room being attached to a work shop at some point but I'm more then willing to start on baby steps.

Now, I do have some general questions and forgive me if I'm asking stuff that has been answered else where and I haven't noticed it. They are as follows:
1) How hot/warm can I reasonably assume a RMH with thermal mass to be able to heat this room? (I'm looking for 80-100 degrees F with a in home temp of around 70 or so)
2) How often do you have to feed a generally normal sized RMH? (as in the readily available designs you see on youtube and such)
3) Are there any safety concerns past the initial set up, burn and operation that are specifc to RMH that would not normally be associated with the old style cast iron wood stoves?
4) How long will a thermal mass radiate heat that would be sufficent for what you assume I would need? (I'm looking to keep my kids from waking up shivering without having to man it like a campfire)
5) If this design has already been tried, is there a link, webpage or resource I could use for reference?

I've attempted to do my research on RMH's but I'm no fool...I know when to ask for help. I've studied Erica and Ernie Wisner as much as possible but have yet to attempt my own build. I can gather that the general practice is to have the RMH inside your residence or to use it to heat some medium (i.e. water) in order to transfer that heat into a residence. I live in a double wide mobile home at this time so it's not feasible, at least, at the onset to place it inside my residence. Thats why I'm looking to create this set up in order to benefit from this type of heating but still maintain some illusion of safety. Now, I have plans within the next few years to build a permanent home out of steel containers surrounded by earthern berms and I'll be looking to place one inside my residence during that process but it's just not doable with my current set up unless the experts here tell me otherwise. (err on the side of safety) So, any advice, criticism or hints would be greatly appreciated before I jump in with both feet and find out the hole is above my head. Oh, one other thing...my wife and I have a difference of opinion when it comes to the desirable temp for the house and she usually wins. So, the temps I've suggested are just that...suggestions.

On a side but related note...I saw a documentary once about a Kansas family who had incorporated an air-to-earth geo cooling system into their home where they pulled outside air into the home through underground pvc piping allowing the hot air to transfer that heat to the cool earth by using similar fans to what I mentioned before. I've researched geo thermal heating/cooling and have found that the majority of the systems out there require water or some other liquid to operate. I've looked at permies and haven't seen anything comparable to what I saw or have in mind. (which is a topic for another time) If there's anyone who's seen this documentary or knows something about this set up, I'd appreciate a helpful push in the right direction in order to keep my northern wife from melting in the southern heat. I'd like to be able to, somehow, mesh it with the system of duct work I have in mind in order to save money and electricity by using the same fans, ductin, etc. I would be using for my proposed RMH system but any information on the cooling set up would get the idea ball rolling.

posted 7 years ago
'round here conventional wisdom says rockets only work in living spaces, as locating them else where makes tending to them unpleasent and unlikely.
That being said I have a simular need to keep the fire outside and bring the heat inside.I am looking into batch box rockets or TLUD charcoal kilns as the fire to charge whatever mass I chose.
thomas rubino
Rocket Scientist

posted 7 years ago
Hi Chris; try looking at PAHS -umbrella house for your side note. As far as your other questions i will do the best i can. #1, My mass is apx 12' long by 27" wide and 30" deep (8" system) Mass temp near the core runs around 130 degree and down at the far end seems to top out around 100 or so. I'm in a green house, but from 70 or so room temp at last loading, 8-10 hours later i am holding 50 degree with an average temp outside of 25, not to bad for a plastic greenhouse. #2, I feed every hour to hour & half,more often at start up, although after your dragon is roaring you can load some larger pieces and last longer. #3,in short , No , same issues, regarding smoke ,fire , and carbon monoxide poisoning. #4, not sure about your burner outside, it may suck some of your heat the wrong way, but as you can see by my greenhouse temps the mass does a very good job at holding and radiating heat. sadly the 55 gal barrel that radiates the most heat the quickest will be outside in another room...#5 Most important!!! get a copy of ianto evans book rocket mass heaters !
R-54.JPG 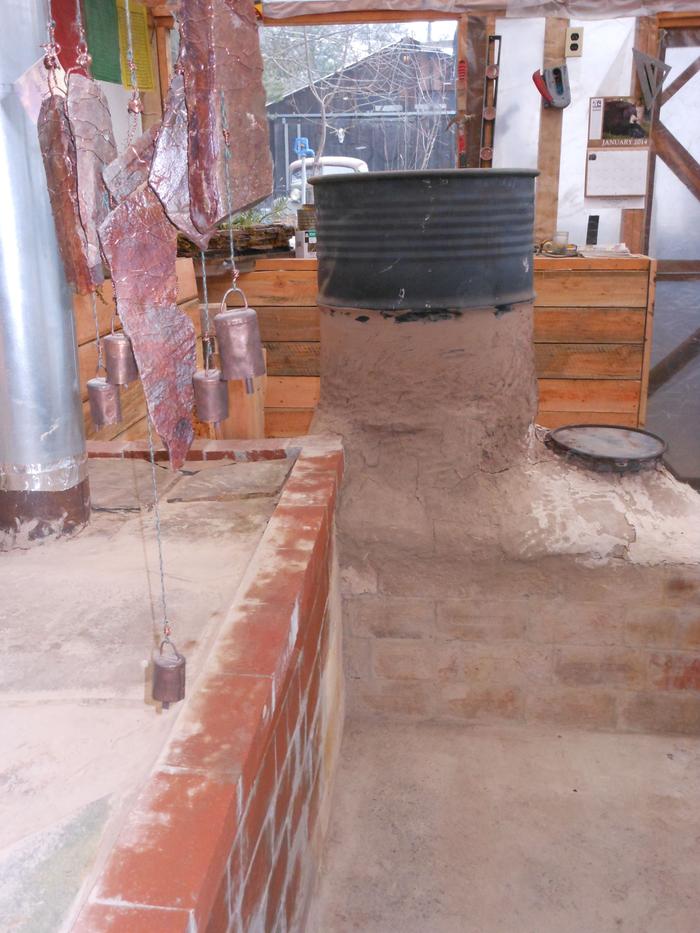 William Bronson wrote: 'round here conventional wisdom says rockets only work in living spaces, as locating them else where makes tending to them unpleasent and unlikely.

Yeah, I kind of gathered that the general idea was to have the RMH within the same walls as you with all the pictures available showing sitting cushions/sleeping cushions and all. If I were able to do that safely that would be my prefered method of going about this "little" project in mind. Unfortunately, with my family living in a mobile home, I fear that it would be a disaster looking for a place to happen considering how fire prone mobile homes are anyways. But, I will be researching your other suggestions about a detached heat source given that I'm just getting started in this area and I have never heard of either of them...they may fit my idea better than a RMH. I have expierence with the old style cast iron wood stoves so I'm not a complete rookie when it comes to wood heat. It just seems that a RMH would be a lot more efficent and a little safer to operate since I wouldn't be on post to monitor it with the set up I have in mind. Thanks for your post...it's given me some options to look at.

Chris Stallings
Posts: 6
Location: Shelbyville, Tn
posted 7 years ago
Thanks for answering my questions Thomas. They've pointed me in the right direction and made me believe that my idea might actually work. I won't be doing this in a plastic green house though...more like an insulated one car bay garage albeit a home made one as opposed to a professional contractor built one. If you're getting those temps 8-10 hours later after last feed with no more than plastic sheeting between your heater and the outside then my idea of a fully insulated room should hold a higher temp for a longer time in theory. So, I'm hoping that with the insulated walls and roof, I'll be able to to conserve more room temp and use it to heat my detached home as opposed to losing it to the outside environment. I guess trial and error will be the judge of that though. One of my concerns is heat loss through the ducting/piping I would need to use to move the heated air from around my RMH to my home. I know that preventing 100% of the heat loss would be impossible so I had the theory of making this "hot room" and moving the more-than-comfortably-heated air to my home so that when it arrives, it's still warm enough to heat my families home to a comfortable level. In essence it would be making a sauna and, instead of sitting in it and enjoying the heat, bringing to heat to me. Thanks for the suggestion on Ianto Evans book, I'll be picking that up.

Center of the universe for batch box rocketd.