Posts: 172
Location: Amsterdam, the netherlands
1
posted 12 years ago
Hi all,

I can't find a topic about it so i start one.

First there is the bicycle generator. 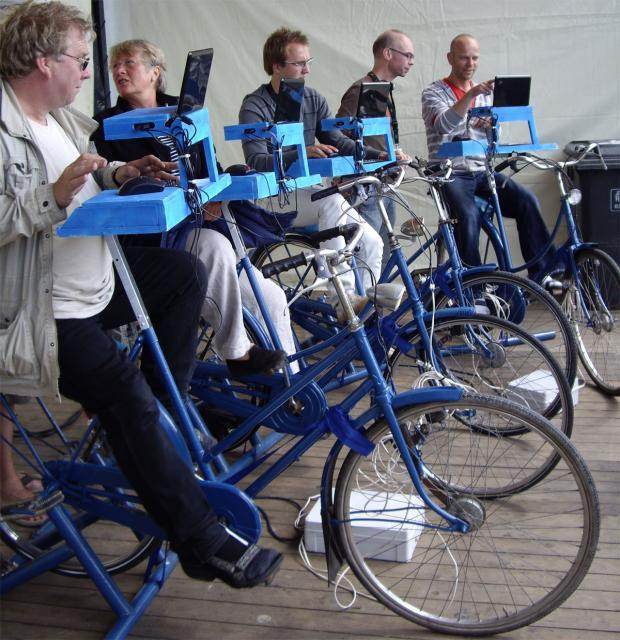 By lifting the backwheel from the ground and attaching it to a dynamo you can create energy that you can store on a 12v battery. The guy that made them told me that, in stead of a dynamo you can also use the device that makes the rotating motion in washing machines and reversing the poles (only the ones from the states cos they are only 110v, not 220v/230v like in most european countries).

It powers loads of stuff; From watching tv (no more obesity from hanging on the couch while watching the tele!), to playing a play-station or wii, or other low energy stuff (so no washing machines, electric blankets, water beds etc.), it works perfect. 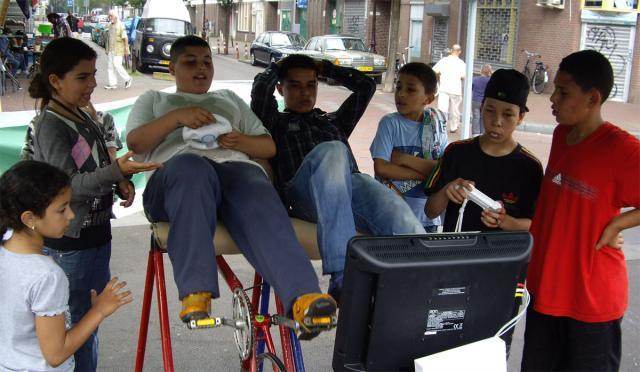 Specially for the lights in your house, but also laptops for surfing the internet and 12v refrigerators. Of course it takes a some biking to power it all, but for people who are already fit and healthy it is a perfect addition to solar panels or wind energy*. when the wind is down, sun is less, or just when you are using abit more than normally, you can add some juice to your batteries by pedaling for half an hour.

Also it is possible to power whole parties, concerts or other stages. The whole climate action camp in belgium last summer (about 400 people), was powered by solar energy combined with pedaling in the night during the bar, disco and other performances. Some other festivals also had only renewable energy sources, combined with additional pedaling. 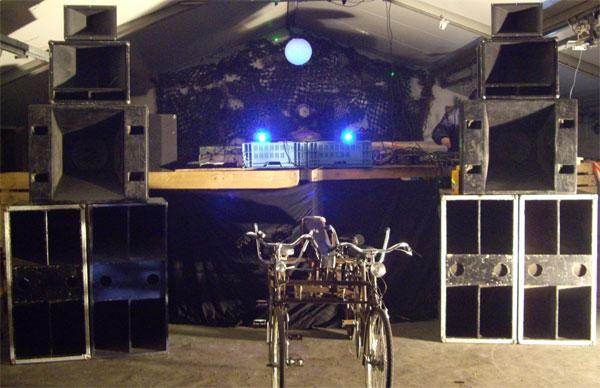 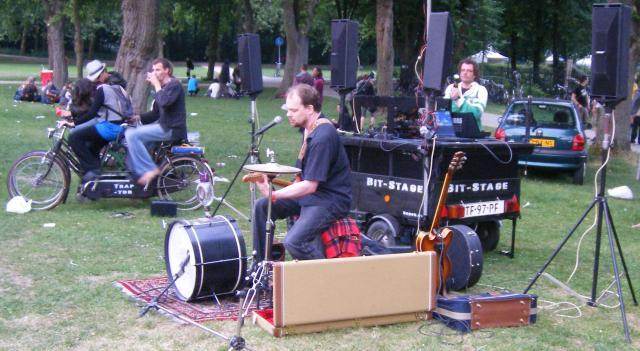 We had his setup at our transition town kids-stage, during a community festival in our neighbourhood last summer. there is a nice movie illustrating how well it works on youtube. The parents had to bike while their kids coul perform.

[edit: hey, i couldn't get the [youtube][/youtube] to work is it still turned off on the forum?]

find more about it at the website from the innovator, Erik Groen, there are more bike-energy-innovations and lots of other fun stuff at his site:


*  my household is 12volts only, which works for most necessary equipment but not for stuff like power tools, heaters or other energy suckers. We have three little solar panels and most spaces have LED lights, which are pretty good these days, and not so expensive anymore, the common room also has one compact fluorescent light (8watts versus 0,8watts for LED), washing we do in a hand driven washing machine, which we would like to connect to a bike.
----------------------

Another good example you can build is the dual purpose bike. 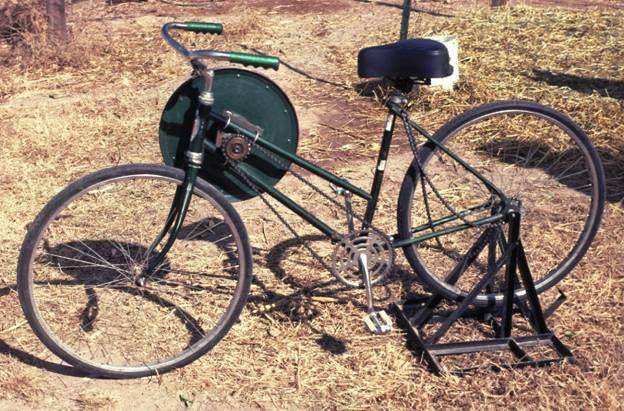 A bike that you can still use for transport, but in a few minutes can be connected to a number of small machines to mechanically power them. Things like a circular-sawblade, 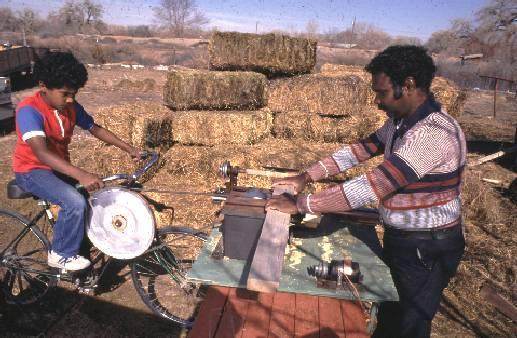 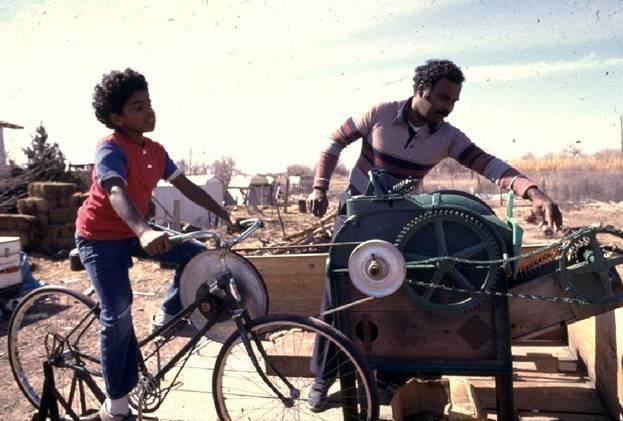 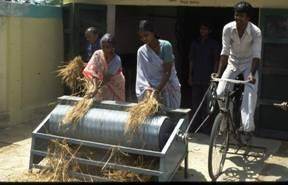 for more pics on more of its many uses for other small machinery, and an instruction manual on how to build it check out their website: www.technologyforthepoor.com
where you can also find things like booklets on container gardening.

it has a good youtube movie showing it in action on their site.

-------
now that i read my own post, i notice i sound like a cheap commercial, but i'm just do damn enhusiatic about this... 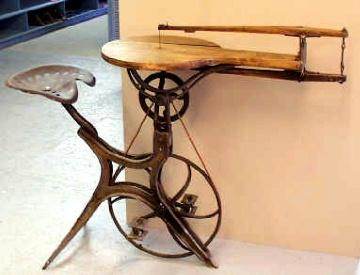 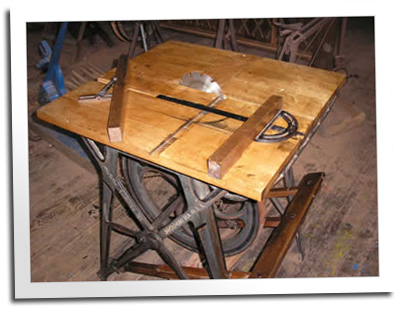 Thousands of others.  Many from the victorian era

posted 12 years ago
I'm glad you posted this, because I was just thinking about bike power the other day, and wondering if any more had been done with it since I read a Mother Earth News article about it LONG ago!

Casey Halone
Posts: 192
2
posted 8 years ago
I just picked up a broken treadmill for the motor, i think its 90. if i remove the rear tire, get a belt to run inside the rim and run the motor, what sort of electronics would I need ot charge some batteries?
Peter Mckinlay
Posts: 182
1
posted 8 years ago
Bolt on same diameter as wheel 4" thick, cast iron is good, or steel, even poured concrete. Takes the effort out of the pedal and balances the load to car alternator.