Whether to catch a swarm or let them be...

Blythe Barbo
Posts: 49
Location: Sequim, WA USA - zone 8b
8
posted 6 years ago
I have 4 Warre hives (had 6, but 2 didn't make it through the winter - I think because we had some serious robbing last fall).

A hive swarmed a couple of weeks ago, right when we had some bad spring storms move through (I live in the NW corner of the Pacific Northwest, fairly close to the water). I managed to catch the majority of the swarm and introduce it to a new hive - and the bees took to it immediately. Even though they stood on the landing board with their tails in the air and fanning their wings, the remaining bees on the shrub did not follow. In fact, they toughed it out through 2 more nights of wind and rain until I finally brushed off what I could and carried them to the hive, and then they moved right in! So now we are back up to 5 hives.

So the other day, a second hive decided to swarm (this one has 3 boxes). I was pretty sure this hive was full because I was seeing a lot of moisture on the landing board at the entrance (lots of bees generate more moisture, right?). Well, instead of taking off, the bees all clung to the outside of the hive - and in fact, they are still there! It's only 55-60 degrees at most here, so I don't think it's bearding. Besides, they are quite noisy!

Timing was good on this one because the weather is supposed to be good over the next few days. I decided to go ahead and add a box, which may not have been a great idea - but everything was already chaotic, so I figured what the heck. When I opened up the hive, I could see the top 2 boxes were full but the bottom box was completely empty. I added a new box anyway and put everything back together, with the swarm still hanging on to the side! I also added an escape board between the top 2 boxes and will go back tomorrow to see about harvesting some honey (I didn't harvest in the fall).

The swarm is clustered more tightly together, but it looks like they plan on spending another night there! Other bees are still bringing pollen into the hive!

I usually take a real hands-off approach to the hives, and at this point, I feel I have disrupted them enough (and yes, I had to take off each box and completely open the hive to get a box on the bottom - which is why I didn't want to add boxes to the hives earlier, since the weather was so lousy). I am thinking I shouldn't force the issue - I should let them make their own decision. I have a swarm trap box in a tree a couple hundred feet away. I also have an empty hive set up (with some comb in it) at the opposite end of the row of hives.

This is only my 3rd year beekeeping - so I am still very much a beginner! Any advice??
swarm2-covering-hive.jpg 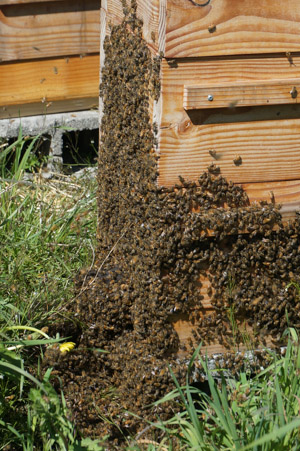 k schaff
Posts: 4
posted 6 years ago
I would scoop up the swarm and put them into the empty hive. Make certain that you get the queen; it sounds like you did not get the queen when you captured the first swarm, since some of the bees stayed in the shrub. Bees will stay with the queen. If you get her, you get all the bees

posted 6 years ago
When you do try and hive them try to lay eyes on the queen.

It is unusual for them to walk when swarming and might indicate some kind of problem with her (wing damage?). It might be worth requeening from another colony if you suspect something is wrong.

If your hives are swarming you should have queen cells that could be transfered.

Blythe Barbo
Posts: 49
Location: Sequim, WA USA - zone 8b
8
posted 6 years ago
THANK YOU K & Michael! That was just the encouragement I needed to capture the bees. I was beginning to think I mess things up more than help!

Here are a few pictures of how it worked. The first is the swarm at 6:30 this morning. They were huddled nice and tight, so I figured if I was going to do it, now would be the time. I looked and looked but could not see a queen under all those bees! I took a few pictures and brought them back to my computer to zoom in on them - at least I didn't see any mites! Not sure how you just "scoop them up" - LOL - but I came up with something that worked. I set up a swarm box my husband made beneath the swarm. It is built to be the same size as the Warre boxes & it has a sliding top & bottom and an entrance hole (which I taped over for this morning). It also has removable bars inside so if the bees start building comb, you can just lift it out and put it in a hive. When you catch a swarm, you can set it on a hive box and open one of the doors so the bees can move in, up or down, at their own pace.

So, at the swarm, I used a flexible Teflon baking sheet and gently worked my way up under them on both sides of the hive. Eventually, they more or less slid into the swarm trap. I had a second sheet (more firm - more like a plastic cutting board, but thin and flexible) that I used from the top, kind of getting beneath their feet and scooping the remainders down in. Closed up the swarm trap. Took it to the hive. Set a box on top, and then opened the top hatch (thinking, bees like to move up). There is a gap between the drawer-like opening and the box (to make room for the handle), so I closed off the gap except for a small entrance. As you can see, there is a bee fanning there. The drawer top makes a large landing board. Hope it works!!

Good tip on possibly transferring some queen cells. I will watch and see how it goes. As of now, the 1st swarm seems to be doing ok. Workers are bringing home pollen. With the 2nd swarm, it is still early. I'll give them time to get situated. I still see bees on the outside of the hive where they came from, though -- not a lot -- but they are forming a small cluster. I don't see a queen, but maybe I will have to try this again.
Swarm-on-hive.jpg 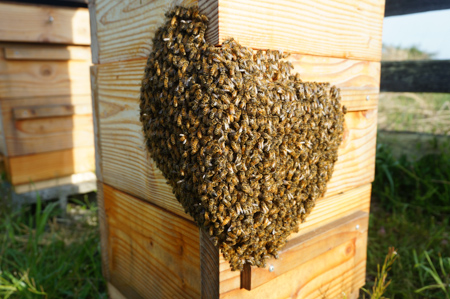 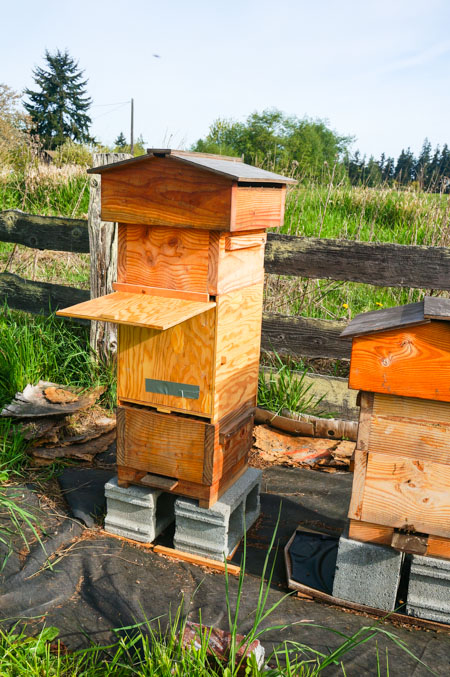 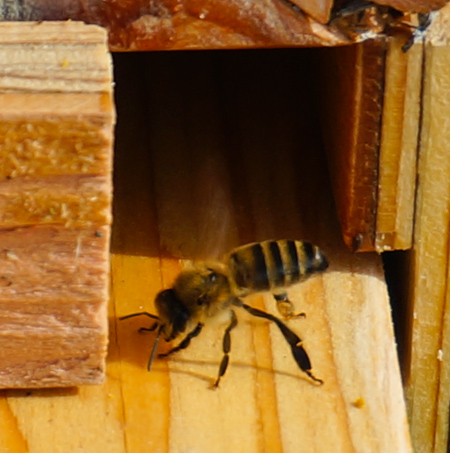 k schaff
Posts: 4
posted 6 years ago
Good job, and I like the pics!
Blythe Barbo
Posts: 49
Location: Sequim, WA USA - zone 8b
8
posted 6 years ago
UPDATE on Bee Installation: It didn't work! I must not have caught the Queen! Although there were lots of bees coming and going from the hive, there was a growing (and I do mean growing!) swarm on a small cedar tree not far away. Perhaps they would have made the decision to move into the new hive, but I couldn't be sure. This swarm would be easier to catch because it was hanging in a column from the branches (as opposed to being wrapped around the hive box!). In this case, it was easier to just use a cardboard box, which I carefully worked beneath them. I gently nudged them off the branches and gave the main branch a little shake and the great majority of them fell in. I took the box over to the hive (removed the swarm trap ahead of time; all the bees in it had either moved to the upper box or joined the swarm) and poured them in. What a difference! There were SO MANY bees at the landing board, they were on top of one another, all fanning and buzzing - and bees formed a circle on the face of the hive, pointing toward the entrance. Sorry I didn't get a video of that intense moment - my battery said it was "exhausted" part-way through! By the time I got back with a new one, things had settled down a bit, but it was still pretty amazing! Check out the pics & video! Success! And I am SO Thankful! Today's weather is cold, windy, and rainy - with more of the same on the way. Glad to get them under cover!

Hmmm - Having a little trouble embedding the Youtube video - tried a couple of ways.

Here is the link: Honey Bee Swarm Installation Success (It's less than 2 minutes.)

Thanks, everyone! (and thanks for the apple! 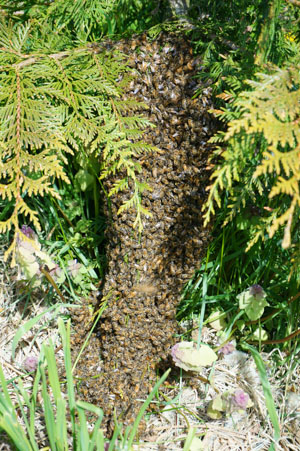 Can-you-see-the-Queen.jpg
Blythe Barbo
Posts: 49
Location: Sequim, WA USA - zone 8b
8
posted 6 years ago
Thought I might try one more way on embedding the video to save you the hassle of leaving the page:

Aha! Worked! And for all those wondering, instead of copying & pasting the link in the "share this video" box, I copied the actual address at the top of the Youtube page - and then pasted it on the forum using the Youtube button. Easy.