Matthew Crawford
Posts: 5
posted 6 years ago
Hi, I am quite new to keeping ducks...kept a few pekin and they slept in a house on the ground. Want to integrate with the woodland where I live and get a tougher breed so...
...has anyone heard of Muscovies successfully being kept to roost in trees? would the way to do this be
1) gradually 'train' them to roost in the trees
2) just don't give them anything to sleep in...let them find their own cover (what about the winter?)

And how do you get eggs from them if they wake up on a branch in the morning? Do they lay nearby always or anywhere they choose or what?

I was thinking of building a shelter, a kind of treehouse with some open sides but a rougher and quicker (less energy expenditure) structure than building a proper shelter as was done for the pekins, with a big branch running through the middle of it or something like that, but actually resting on big posts in the ground, so the branch(es) move freely through the middle of the structure. Anyone done something similar?

Thanks!
Neal Foley
Posts: 49
Location: union Maine
5
posted 6 years ago
Muscovies will roost naturally in trees, but I think they choose to do this. Not so sure you could "make" them.....

An elevated duck house is a good idea from a predator standpoint, but I think you need to use some sort of duck-board to let them waddle up. The muscovies I've kept were ground birds and didn't choose to fly or roost, which is why the fox picked them off.....

You could encourage them to nest in your tree-house, but a protected space on the ground would probably be more to their liking. No matter what, if you give them a place to nest, the chances are they will only use it if they want to /feel safe about it. Even if they do use a provided nest, they will often lay elsewhere anyway.... probably something about survival.

Ducks are very different than chickens..... but muscovies are the closest of all, I guess.... most ducks are flock critters. Muscovies are pretty independent. I think just letting them free-range and fend for themselves is risking running a predator feeding operation. Probably not what you are after. Even with a LGD, not providing them with some sort of shelter or nesting place is risking a high loss factor. Muscovies are wilder than most, but they are still domesticated.....

I think if you could raise some which would roost in the trees, and became sited to your land, their offspring would be hardier and better adapted to your plans. As with everything it takes experimentation, observation and a certain stomach for loss. Where there is livestock, there is dead-stock and it all depends on your tolerance for feeding wildlife.

I don't mind a hungry vixen feeding her kits in the spring, but not at the toll of my flocks. I do mind the neighbor's dog wiping out my garden army of guineas and ducks in one night "playing"...... Stuff happens when we least expect it, and never in a way we can plan for it. It's how we adapt and move on which determines what sort of farmer we become.

Karen Walk
Posts: 122
Location: VT, USA Zone 4/5
4
posted 6 years ago
I have three muscovies, and I love them. They are very friendly (more than the chickens) and are great gardening buddies. I have yet to see them fly or roost. Their wings were clipped when I got them, although the feathers are coming back. 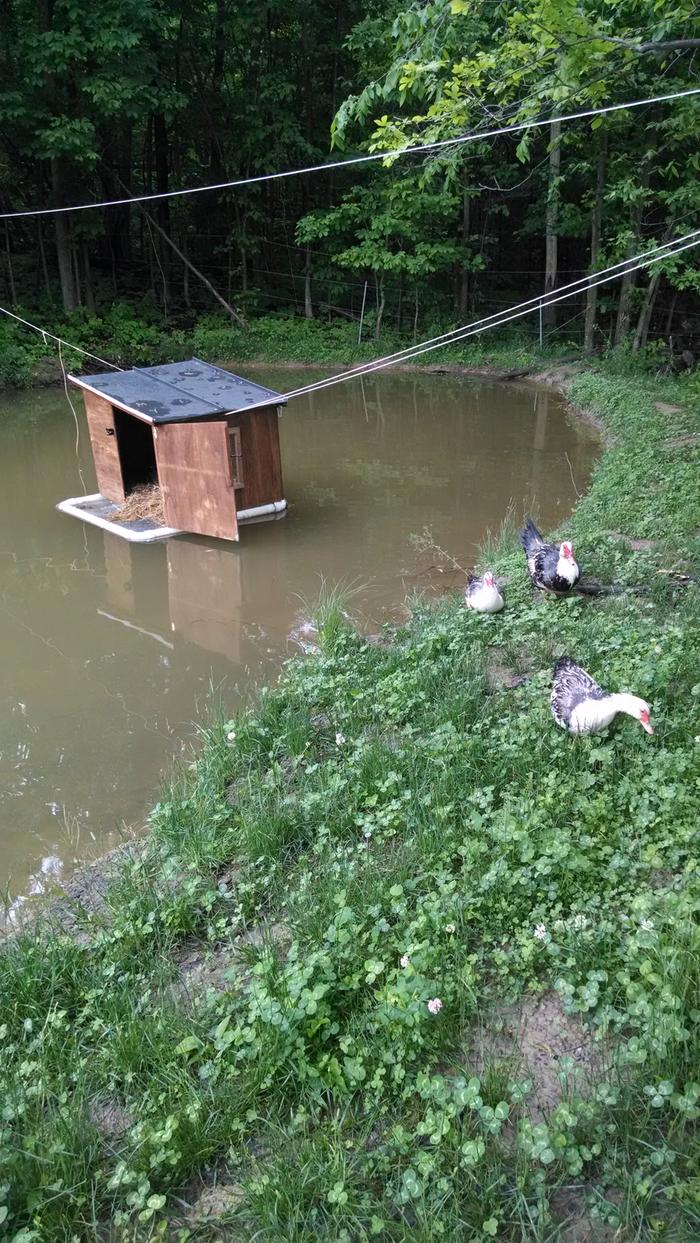 Neal Foley wrote:I think just letting them free-range and fend for themselves is risking running a predator feeding operation. Probably not what you are after. Even with a LGD, not providing them with some sort of shelter or nesting place is risking a high loss factor.

I've had success letting my chickens free range. At least the ones I can't contain. They're pretty good at finding shelter/nesting spots for themselves. I've got at least 10 baby chicks running around maybe 3 weeks old. I'd rather they didn't hide their eggs and hatch out because I wind up with too many roosters.

I do have LGDs though.

Matthew Crawford
Posts: 5
posted 6 years ago
All very useful, thankyou. Time to contemplate and experiment now.
Kim Schmidt
Posts: 20
2
posted 6 years ago
This post is timely for me. I have some Muscovies here that are just 2.5 weeks old and are going to need a coop soon!

Currently, they are in the garage at night in a large dog kennel. They spend much of their day in a lightweight (would not be nighttime predator proof) run with a tub of water and some foraging opportunity.

I read mixed comments on Muscovy housing: somewhat comparable to other ducks in that they won't go up a steep ramp. But I also read that they are more likely to use housing if they have perches.

I'm not going to clip the wings on mine. I'm hopeful this will help them get away from some predators. But I do want to protect them at night. I'm hoping to get them to habitually "go to bed" and then get a closing door on a timer. That is what we have for the chickens and I really like it.

Unfortunately, nothing of quality has popped up on Craig's list lately and I don't have the time to build one myself. We may have to try out the doghouse-style option if we don't find a larger coop soon.

Tina Paxton
Posts: 283
Location: coastal southeast North Carolina
4
posted 6 years ago
I have a small property in a sub-rural area of coastal NC. I have a mixed flock of chickens, muscovies, Blue Swedish, and Pekin.

Muscovies: I have a few from my original acquisition that roost in my pecan trees. Their off-spring (because I clipped their wings) roost on the ground or on the old tires I have leaning against each other. I don't intend to clip wings any longer but I suspect they will continue to be less "flighty" than their parents since they didn't start flying early. Contrary to the general "rule", even my drake is capable of prolonged flights of a half football field, give or take, longer if he starts from an elevated take-off point.

Chickens: most of my hens prefer roosting in the Camella tree rather than the coop and have learned to get up high enough that I can't reach them to pluck them off their choose spot and put them in the coop. (And, they stay just as dry up there as they do in the coop in a storm.)

Blue Sweds and Pekin: still immature and I've seen absolutely no effort on their part to fly.

Predators: There is SOMETHING that has been slowly pilfering my mother's flock of silkies. I thought the last one was a gonner at 3 am this morning because I got home after dark last night and had no working flashlight (need batteries) to go put the silkie in the coop so it got to stay in it's prefer spot overnight. She lost some feathers in the process of getting away from whatever creature was after it but she survived to tell the tale. The predator ate the eggs I also didn't get collected last night. Interesting thing is -- This predator goes right by the Muscovies and the Sweds and Pekin... it mostly targets the silkies and to a much lesser degree my larger hens...but not the ducks. I need to get a wildlife cam set up to find out what it is...I have trapped two possums but the last time I set up the trap, I got nothing...time to try again...I'm thinking it is a 'coon....not sure though...

Oh, and I'll add this since it sounds like you want the Muscovies for egg production?? I don't see them as being good for that. My muscovies lay eggs once a year... even if I pull eggs each day, they don't just continue to lay eggs...they eventually stop... if you want egg production, your best bet is K.Campbells...or pekins...or Blue Swedish...but not Muscovies. I love my Muskies but they are not geared for egg production, at least mine aren't. Delicious meat, good foragers, good bug patrol, sweet pets...I love how they wag their tails and that bobbing thing they do with their necks/heads....

http://notquitethereyethomestead.blogspot.com/ --On the highway going from here to there the question is oft asked "are we there yet". The oft given answer is "not quite yet". So it goes with life and with my little piece of it. This is my story. I get to tell it my way. I hope you enjoy it.

Tina Paxton wrote:I
Oh, and I'll add this since it sounds like you want the Muscovies for egg production?? I don't see them as being good for that. My muscovies lay eggs once a year... even if I pull eggs each day, they don't just continue to lay eggs...they eventually stop... if you want egg production, your best bet is K.Campbells...or pekins...or Blue Swedish...but not Muscovies. I love my Muskies but they are not geared for egg production, at least mine aren't. Delicious meat, good foragers, good bug patrol, sweet pets...I love how they wag their tails and that bobbing thing they do with their necks/heads....

thank you for all of your feedback

I do realize Muscovies will lay fewer eggs than other ducks. Some people do get several per week. The average seems to be 2 per week per hen. I still decided they were the best duck to start with, being more self-sufficient than the other breeds. I might get a couple of Khaki Campbell hatching eggs to put with one of the Muscovy hens when the time strikes me..... after we get a good house set up, get the ducks in the habit of going to bed at night, see what predators come after them, and especially if my dogs adjust.

I'm hoping to let the ducks free-range most of the day; and like my chickens we will get a door on a timer to close them in at night. The good thing about the ducks being out with my dogs is that my dogs keep all of the OTHER predators away. (I've seen my Shepherd chase off raccoons twice, when my chickens were foraging in the woods). The bad thing is that my Labrador mix has a strong hunting instinct herself and we can't trust her out with the adult chickens. We are getting her somewhat acquainted with the Muscovies as they grow. She has adjusted to all other "housepets" like the rats my kids have. So I'm hoping that the day will come when she mostly gets along with the Muscovies and/or they learn to fly away from her in time. How that all works will help me decide if I can have non-flying ducks out foraging all day.

My chickens do well being in a chicken tractor much of the day; we let them forage when we put the Lab in the house part of the time and they get a new space under their tractor each day. But I don't want ducks locked in a pen and have them living in a mucky mess.

If my Muscovies are really POOR egg layers, I'll either have more (we have a lot of foraging availability, so maintenance costs are low) or we'll start using them more for meat.