posted 8 years ago
Hey guys, looking for some tips with hybrid ideas that keep coming to mind.

The story starts with deciding to build a portable hexayurt a temporary shelter until December as I work on digging out mountain side for an underground house. The spot for the hexayurt is fairly flat on the ridge of a mountain (thin top soil before hitting sandstone). The ideas begin with an attempt to solve several issues with the typical hexayurt structure, being warm and dry during the winter. They are well suited for windy desert conditions and have been tested at burning man, but it can be hot and humid here and cold in winter. The problem, foam or osb panels seal air tight, and possible fire hazard.

The land I'm on has just been timbered, so lots of "junk" timber as local resource. Aside from the typical hexayurt not having a shed roof, making a psp/wofati structure comes to mind. Say, an H13 design over a 4' pit giving 12' at the ceiling's highest, with a possible loft. I think the drainage can be solve fairly easy on this gently sloped ridge location, or even add a ferrocement roof with rain gutter to cistern instead of the last thick layer of soil on the second polyethylene sheet. Pretty much a wofati/psp version of the earthship hut design with a hexayurt H13 timber frame. Gables and Hollywood wings work with the hexayurt as far as I can see.

The last idea I have is to make a psp/wofati hexapit shelter. Not a circle, not a square, has two extra walls for whatever. 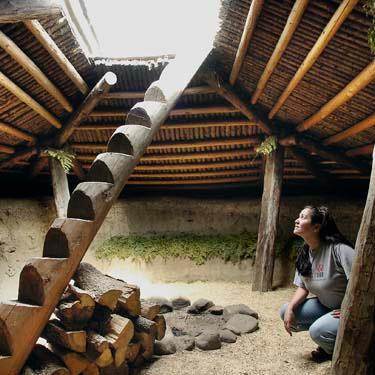 Have some doddles of both ideas, but I think if you are familiar with psp, watch the hut vid and look at the H13, you'll get the idea for the first one, just add two walls of windows on those highest, exposed H13 walls. 8'walls, with 4' loft and stove pipe vent in roof. The second is just a pit shelter with a hex timber frame, 12' in total height, a hole in the roof firepit beneath, with possibly a gable on one wall for a second entrance, and maybe one wall as a kitchen area. Shored up sleeping benches on the rest of the walls.

My intuition is leaning torward the second idea, or just building a regular hexayurt for about $200-300 in material, and working on a regular underground house wofati style.

Just looking ideas on drainage. Uphill patio and French drains, hut earthship roof, or big hole in the roof? Cheap is good, would rather spend 200-300 on a concrete mixer for making a lot of seed balls and still be warm and dry at least up to December. Main use will be for rustic woodworking and food forestry base.

posted 8 years ago
Ok, came up two ideas that will be tested.

Idea A is a Hexaship, a hybrid of the hut earthship design, and psp/wofati construction. Ideally, the wall of windows will face south, but it should face uphill on a slope allowing water to drain from the shed style roof.

Idea B's design idea came from the H13, but is technically an H14 with a gable roof, with water draining to two sides, and 4 sides of the hexagon being windows. Think I'll face the windows east and west so the west side will catch the prevailing wind here for cross ventilation.