Dave Lot
Posts: 152
7
posted 6 years ago
I would like to build a new home, and while I live in town, there is no way to get a cob or earthen home past the local building inspector. I have been told that if I were to build a new home, I would have to dig down 3 feet and install a standard frost footing. The plan is to dig down the 3 or 4 feet , install the footing, and have that as the base for the new house - meaning that the windows will be level with the ground. If I go 4 feet down, there will be less of a "hill" when I cover the whole thing up, but what about the windows ? I know there is information out there about solar heating / shading - I just need some help figuring it all out. Is it as simple as facing south and putting in lots of double pane windows - with a large concrete overhang ?

Property is at the top of a 100' hill - sandy soil - P.U.C. was working on the sewer system and had a 30 foot hole dug - small trickle of water a bottom of hole - good drainage.

Thanks. This is an on going project - planning right now. could go completely underground.

Dave Lot
Posts: 152
7
posted 5 years ago
So, now that I have built and working with a rocket mass heater, the plan may or may not change. What about building a 10 inch rocket mass heater below the slab of the new house ? How much mass would I need around the pipe ? 3 feet - 5 feet ? Build with sand and clay first then cover with concrete ? I would want enough mass to heat evenly, but not too littel to make hot spots in the floor.

If I insulate around the mass - around the pipe - then all the heat should go up into the slab, heating the liquid in the radiant floor tubes, and spreading the heat thruout the mass of the slab - make sense ? Comments ? 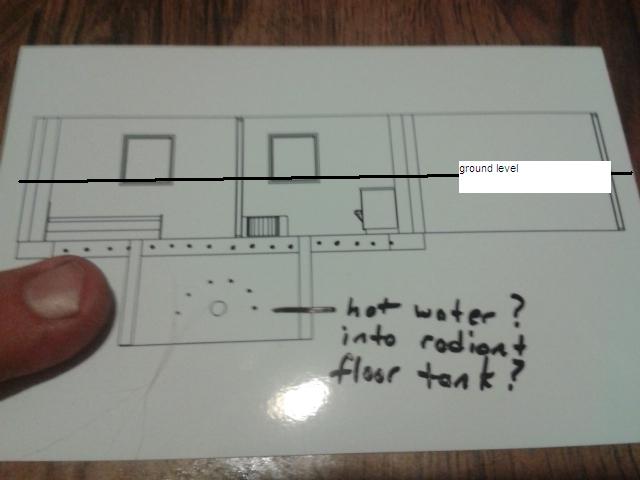 Posts: 3133
Location: Upstate NY, zone 5
157
posted 5 years ago
A 10" RMH is really big. An 8" system is usually enough to heat an ordinary house, and if you build partly earth sheltered or otherwise superinsulated, it is unlikely that a bigger one would be beneficial.

An 8" system is considered to be able to power 50' of duct, minus 5' per elbow, and a 10" system would need considerably more length to extract a reasonable amount of the heat generated. Burying the duct deep under the floor would mean a tremendous thermal flywheel, and it could take days for the heat from a fire to reach the room. This curtails your ability to react to changing weather. If the duct is closer to the floor, you do run a risk of building up too much heat inside the slab and overheating and weakening the heat tubing.

"Is it as simple as facing south and putting in lots of double pane windows - with a large concrete overhang ?"
In a nutshell, yes. The exact answer depends on your latitude and climate. How sunny is it typically? In hot months? In cold months? A 3' frost depth implies northern US but not the far north.
Dave Lot
Posts: 152
7
posted 5 years ago
With the windows level with the ground, I guess I could build a concrete overhang over the windows - too keep out the summer sun, but let the winter sun in . . .

How much of an overhang would I need ? Geographically I am London - Toronto area . . Ontario Canada

I had too tilt my Apricus water heater at 45 degrees too catch the winter sun, so I have a good idea of the principles behind this method of building . . . the sun really moves in position comparing summer and winter . but is it worth it in reduced heating costs ?

Glenn Herbert wrote:A 10" RMH is really big. An 8" system is usually enough to heat an ordinary house, and if you build partly earth sheltered or otherwise superinsulated, it is unlikely that a bigger one would be beneficial.

8 inch system. - start of the system (fire pit) on one side of the house - inside the house. Chimney run is a straight run all the way across the house, under the slab - with no bends (for easy cleaning) - exits outside the house beside the slab - fully poured concrete pier up against the wall encases the vertical chimney - insulated right up level with the roof - from there you have a standard chimney going up as high as needed. - only 1 90 degree bend in the chimney with this idea. with no roof or wall penetrations too leak and cause problems.

Now, before you start screaming

, the problem with this idea, is where too locate the clean-outs. I was thinking about running the chimney up along the far wall - indoors, but then I would have too exit through the roof -(not going to do with an underground roof) or put another bend in it too go through the wall - then another 90 to go up - more than code allows . . problem there.

I am just tossing out idea's for this one . . . trying to make it fit. . . any suggestions would be welcome.
chimney-idea.jpg 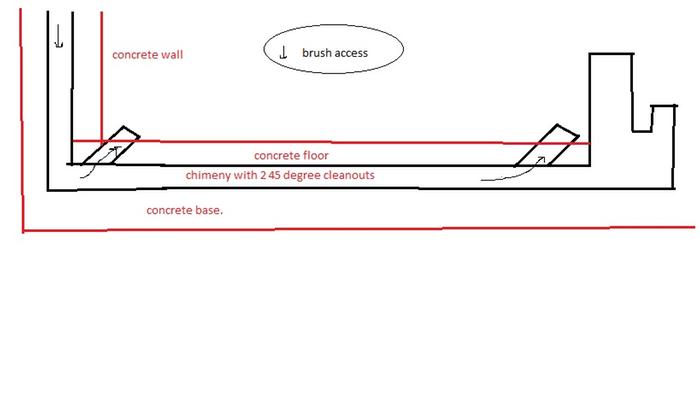 Submitted a rough plan too the zoning department and let them know that I would like too build a hobbit home addition to the existing house . . told them that I have not done anything yet - or will do anything yet - without their approval . . then asked if they had any problems with the size or layout of my plan.

Took them a month and a half, but they do not have any problems with my plans . .

The building inspector has told me that he still needs too see detailed plans on how I am going to ventilate - light - drain - support - - - - - you know, the basic stuff of home building....

(and they only looked at me like I was slightly crazy . .