Garry Hoddinott
Posts: 75
posted 6 years ago
I want to use a 12v solar panel to lift water 15m. 12v dc Pumps are great for pumping a lot of water with low head for NON continuous operation. A Seaflow DC12v 2000 gph bilge pump is about $35 on Amazon. That is probably excessive - a 1000gph would do fine It will lift water 1- 2m ok. But I want water up 15m. I've not found an inexpensive pump that will do that.

My brainwave is based on a balance beam. A small 20litre bucket (5g) say 15m out on the end of a pivoting beam. The pivot point is MUCH closer to the other end to which is attached to a 220litre (50g) drum. Not sure of the math but it seems to me the big weight close to the pivot MUST lift the 20litre bucket. Its mass could be increased with a few lead weights. As the the big bucket is filled the small bucket is raised until it approaches vertical and spills its water into a funnel connected to a pipe that goes down the beam and then up the hill sending that 20 litres to a storage tank 15m up the hill. Yes, there must be a non return valve (check valve) to stop the water in the pipe flowing back out when the beam goes back down.

Using some float arrangement / or some clever syphon lock the Big bucket discharges its water into a CISTERN once the vertical point is reached. Now the small bucket on the end of the beam is heavier and the beam begins to tilt back to the horizontal nice and slowly where the Small bucket is refilled either by dunking or a bottom flap mechanism. Now the big bucket is lifted maybe 1m off the ground.

At this point the big buckets valve is closed - the water in the cistern is full again and that triggers a float switch on the bilge pump in the cistern to turn on again. It fills the big bucket, its on the very small end of the pivot remember, and as it fills it slowly falls under weight taking the small bucket up to near vertical. The pump turns off automatically as the water level goes down. The cycle continues.

Note that the pump water is either in the cistern or in the bucket. Effectively it stays constant, the pump is not working too hard - many people use these pumps for small waterfalls in ponds and run then continuously - not a great idea. This seaflow pump and other like have a built in float switch - perfect for this application.

This could be connected to a 250w solar panel ($250) and a $150 deep cycle low amperage battery. A $25 charge controller governs the voltage to the battery and shuts off the contraption at night when the battery voltage falls below a set level. Those costs plus another $500 or more for the pump and possibly an inverter also would be needed to do this otherwise. There IS A CHANCE to PV can power the pump directly - and a chance it can damage the pump. What's a $35 pump in the interests of science - hehe.

Regarding powering the pump. These pumps draw 5-8 amps which is less than half what a PV panel puts out. I expect that with battery 8 - 10 hours pumping would be possible, especially in summer which is when water is needed most. So 10 hours x 1200lph = a very satisfactory 12,000litres (3000gal) a day. Every day.

I have been pondering this for days / weeks but feel quite jubilant about this solution.maybe 15m beam is too long. But it could be supported by one or two guy wires attached to a vertical extension of the pivot. I dont think the 20 litres (kg) is too much weight.

Who wants to be first to burst my bubble and tell me why its a dumb idea???

Dear Moderator - I will also post this under Alternative Energy. Feel free to move it to the most appropriate thread.

You may also want to look into this: http://www.rexresearch.com/bellocq/bellocq.htm

I ran across it while reviewing some of Bodine's pulse-jet patents a few years ago. It obviously works, but it doesn't seem to have ever caught on.
Garry Hoddinott
Posts: 75
posted 6 years ago
Yes Andrew a diagram might be useful. Certainly it helped me see things a little more clearly. 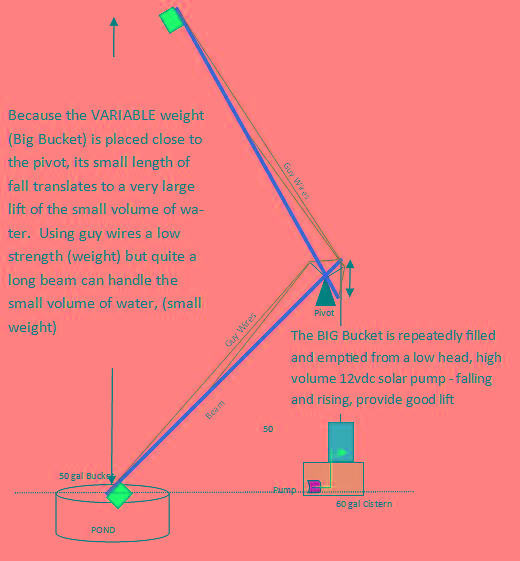 I added a couple of other pics at my website

Let me know your thoughts please.
Andrew Parker
pollinator
Posts: 519
Location: Salt Lake Valley, Utah, hardiness zone 6b/7a
5
posted 6 years ago
So, a variation on the Drinking Bird? Very clever. I hope it works when scaled up.
Mike Kuhn
Posts: 11
posted 6 years ago
Hi Gary: with a 13 - 1 lifting ratio you would need 6045lbs to lift 50 gal. with that leverage, or you could use a differential pulley between the small side of the lever and the large drum, that would give you a 32 to 1 mechanical advantage, but the large drum would have to travel a bit farther, as in down a shaft?
Garry Hoddinott
Posts: 75
posted 6 years ago
I'm skinning this cat the hard way.

I realised that variable weight was the wrong idea - we need VARIABLE MOMENT. This is sounding more like alternate energy so I have posted in that permies forum and am asking for assistance from anyone who can do simple electronics to create a timer mechanism on a small dc motor. Yes you guessed. Its all about MOVING the weight rather than increasing weight.

Thanks for previous comments and particularly the differential pulley comment. I researched it and found the Chinese windlass. Perfect solution! Key ingredient in another project I will shortly describe.

kevin stewart
Posts: 176
19
posted 6 years ago
Hi
Check out the you tube videos on the "emas" pvc pump.

Look at their windmill design. See the lever arm at the top of the pump.

A 12 volt windsheild wiper motor also makes an up & down motion, made longer by that lever arm.

Take the gear cover off that motor and you have a slow 12 volt ceiling fan motor.

If you take the time to see the movies
(1) why doesnt he use a brush for his p pvc glue?
(2)is that his best blue shirt ?
(3)how soon will that welder go blind not using eye protection?