Self driving trailer. Disconnects from vehicle and moves independently

Dale Hodgins
Posts: 9002
Location: Victoria British Columbia-Canada
690
posted 6 years ago
This trailer has become my jobsite runabout.  It's's human powered and the human is me.

I want to put an electric motor on it.  I can see mounting a car tire under the tongue. A chain drive could be mounted on the tubular steel of the tongue,  running down to the wheel, just as on a motorcycle. A simple seat would be included. A motorcycle type steering system would be nice.

I generally load the trailer so that it has about 50 pounds of tongue weight. Add my 190 pounds along with a wheel and we will have plenty of traction when in self driving mode.

It would be nice if the wheel and steering contraption could turn sideways so that it  doesn't touch the ground. This would allow the trailer to still be dragged down the road.

I have many jobsites where I can take something like the trailer directly to the worksite, but I can't take the van there. When I cut trees, I could drive the trailer right up onto the lawn to load the firewood and branches.

I often find myself driving my 2000 pound vehicle with trailer in tow,  so that I can pick up something that weighs 100 pounds. This doesn't seem very efficient.

In this thread. I investigate the idea of creating a farm runabout from an old ride on lawnmower.
https://permies.com/t/41830/gear/Dales-mobile-battery-bank-runabout 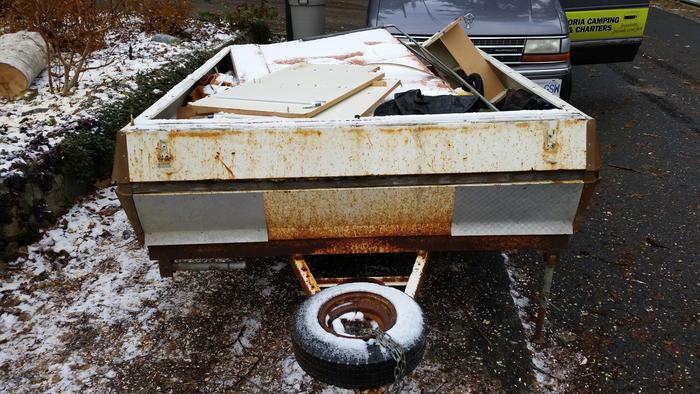