Gaius Marius
Posts: 4
posted 6 years ago
I am going to do a one thousand square foot strawbale addition to my house. I am trying to find out what type of foundation I should use. I am thinking of building a stem wall with a crawl space and then backfilling the stem wall. Please let me know if this makes sense?
Hans Harker
Posts: 115
Location: Chcago IL
3
posted 6 years ago
From what i gather, there's a serious concern where it comes to straw bale wall being in direct contact with concrete, Concrete will draw up moisture and pass in onto the wall. That could be remedied with some moisture barrier but a lot of people here seem to think it a solution that comes with serious problems and will fail eventually. This is why a (cinder block?) stem wall and reinforced concrete foundation may not be such a good idea. I'm assuming you're talking about that.

Backfilling the crawl space needs caution as well in the same way so you don't use materials that don't draw up moisture. Gravel seems to be a good choice while sand doesn't from that perspective.

There is a thread about raised earth foundation that you may wanna read.

A lot is going to depend on the particular location where the addition is going. So maybe if you describe what kind of soil you have there you'd be able to get some more specific advice from more competent members:)

Gaius Marius
Posts: 4
posted 6 years ago
Thank you for your reply. I live in a river bottom area and the land is a clay type. I am trying to find a construction material to use that will provide good insulation. If you haveany suggestions please let me know.
Bill Bradbury
pollinator
Posts: 684
Location: Richmond, Utah
32
posted 6 years ago
I would use the random rubble technique on a gravel trench. Ian Cramb has published 2 excellent books on this technique, both are available on amazon.

I live in a 120 year old adobe farm house that is on a foundation system like this. It works great!

I am restoring a 90 year old craftsman mini mansion with a concrete foundation; cracks have formed that will keep getting bigger until there is a failure. Probably another 100 years off, but how long are you building for? The rubble foundation will be around indefinitely since it is lithifying and getting stronger.

Posts: 3585
Location: Upstate NY, zone 5
226
2
posted 6 years ago
"River bottom area"... Do you live in a spot that could get flooded in the worst imaginable flood? If so, strawbale sounds like a prescription for eventual disaster. And clay soils in a bottomland situation will be constantly moist, so you need exceptional isolation for your strawbales. Is rock and gravel easily available nearby? Only with that resource would I consider strawbale construction in a moist region.
Terry Ruth
Posts: 698
26
posted 6 years ago

Voy Grabiec wrote:From what i gather, there's a serious concern where it comes to straw bale wall being in direct contact with concrete, Concrete will draw up moisture and pass in onto the wall. That could be remedied with some moisture barrier but a lot of people here seem to think it a solution that comes with serious problems and will fail eventually. This is why a (cinder block?) stem wall and reinforced concrete foundation may not be such a good idea. I'm assuming you're talking about that.

http://www.ecobuildnetwork.org/images/PDFfiles/Straw_Bale_Test_Downloads/moisture-properties_of_plaster_and_stucco_for_strawbale_buildings_straube_2003.pdf
Actually straw bales have low permeability and water uptake that need no barrier according to lab testing: The cold condensation or dew on concrete or a rubble trenches is negligible.

2.1.2. “The capillary transport properties of strawbale have also not been measured. While the walls of the stalks will wick liquid water (because of the nature of the small cellulosic walls), the bale itself is composed of mostly large pores which will not wick water. Therefore, the water uptake of a strawbale will be slow, and should quickly reach equilibrium with drying. In general, liquid transfer of the straw has no practical importance since liquid water should not be allowed to contact strawbales. “

“Wood (and likely straw) will adsorb vapor from the air up to approximately 25% moisture content at 98% relative humidity, but fully capillary saturated wood may hold two to four times this amount of water. Once a material is capillary saturated it will generally not be able to store any more moisture. Hence, when this moisture content is exceeded, a material is called over-saturated, and drainage, if possible, will begin to remove the excess moisture.”

The rubble trench and good drainage away from bales will remove the excess water and/or moisture depending on phase of H20, if needed, which is very unlikely it reaches 100 % saturation from capillary suction…it have to be sitting in a puddle of water for a long time. Take a look at how much moisture wood can store especially spruce in the graphs 2.3, then look at concrete/mortar not a lot so, it will drain due to low adsorption (ability to store moisture at the surface). When rendered with a clay stucco-plaster that has very high adsorption and diffusion combined with a high insulation value of bales (r-30 to r-50) and slow heat transfer, any moisture should dry out in the wall or allowed to drain, evaporate, and wick out or down.

Here is what code says,

AR105.6.5 Separation of bales and concrete. A sheet or liquid-applied Class II vapor retarder shall be installed between bales and supporting concrete or masonry. The bales shall be separated from the vapor retarder by not less than 3/4 inch (19 mm), and that space shall be filled with an insulating material such as wood or rigid insulation, or a material that allows vapor dispersion such as gravel, or other approved insulating or vapor dispersion material. Sill plates shall be installed at this interface in accordance with Section AR105.3. Where bales abut a concrete or masonry wall that retains earth, a Class II vapor retarder shall be provided between such wall and the bales.

I’m assuming the intent of the ¾ gap is in the rare case of saturation drainage can occur since code does not know how much it rains in all international climates it is conservative. Class 2 or 1 perm is code minimum or any material that allows “vapor” dispersion drainage.

Here I drew up a quick sketch that should work for a concrete stem, cinder block, or rubble trench only with it no need for a sill or insulation gap. You can run utilities like plumbing in a vented or sealed crawl space depending on climate, or put a 2’ pony wall where the ¾ gap is to run electrical….alot of folks put pony walls on slabs or earth floors with plumbing in them. Nothing wrong with strawbales in wet climates, as long as you are breathable and do not use vapor barriers like plastic (less than 1 perm, anywhere!) Protect the stucco from rain erosion with good hat and boots. 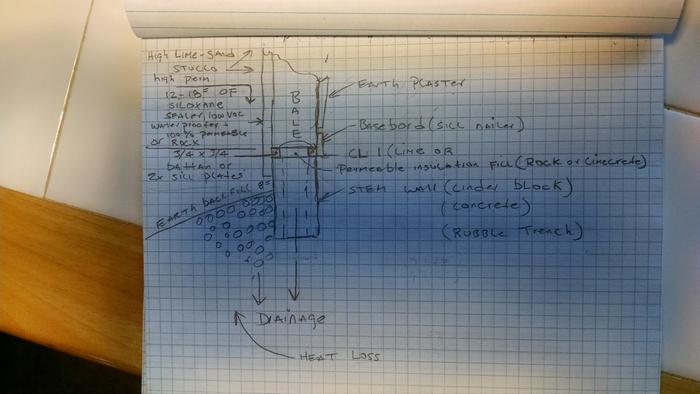