techniques that should be familiar to permies
making the mainstream 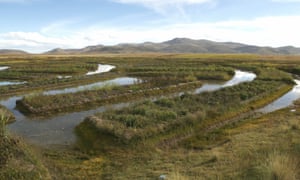 In Peru, Kenya and India, NGOs are helping communities overcome water scarcity using wisdom from the past


India
Across large swaths of the Thar desert in western India, traditional techniques for harvesting the little amount of rain that falls has helped people survive the powerful effects of the sun for centuries.

The most beautiful of these are step wells – known as baolis in Hindi – large, stone structures built to provide water for drinking and agriculture. Baolis have existed for at least 1,000 years and were constructed in towns and alongside serais (travellers’ inns), across the desert and into Delhi.

Kenya
But things are changing for the better, thanks to an ancient water harvesting technique being used in the dry regions. Sand dams, which were invented by the Romans in 400BC, have become an important source of water for domestic and agricultural needs.

Sand dams are constructed by building a concrete barrier or wall across a seasonal river with a firm bedrock. As the river flows, sand in the water is deposited behind the wall. Over time, layers of sand build into a reservoir for water, which remains stored in the sand once the river level drops. Evaporation is virtually impossible below a metre of sand – no matter how intense the sun – and the water is clean and safe for immediate drinking as the sand acts like a filter.

Peru
...today’s farmers are reviving an ancestral system of cultivation and irrigation using what looks like an intricate piece of land sculpture.

Resembling an ornate garden maze from above, suqakollos – or waru-warus – are a patterned system of raised cropland and water-filled trenches.
Dan Boone
gardener

posted 4 years ago
In a drought, you'd really have to be thirsty to fetch water from the bottom of one of these step wells!  But I've been thirsty.  You would...

posted 4 years ago
Nice. I recently theorized a pond full of dirt, thinking i found a great new idea. Turns out it was invented 400bc. The sand dam. Thanks for posting it.

My thoughts were no standing water so no mosquitos, no loss of grazing or farmland because there is no standing water. And the water would be clean, filtered through the earth. It could be collected via a gate valve on other side of dam. No electrical or in ground pumps needed. Depending on height of dam (concrete wall) vs sand(,or soil) height, you could achieve a naturally filled wicking bed on a large scale.