Dale Hodgins
Posts: 9002
Location: Victoria British Columbia-Canada
666
posted 4 years ago
Today is the first time that I've tried out my new 80 volt,  cordless electric chainsaw from Greenworks.
.......
It's got a much larger battery than my E-go saw and the bar is four inches longer. Everything seems to be in the right place. As with most chainsaws, I would prefer to have a much larger opening to the chain oil chamber. The choice of green and black is unfortunate, but I guess they had to go with something. I prefer orange and yellow, so I can find the saw when it's half covered by leaves.  My gas powered saws are Stihl and Husqvarna, both orange.
.......
I gave it only a brief run,  using the stock chain which is one of those nearly useless,  anti-kickback chains. I will soon have some good quality Oregon chain installed.

The saw handles pretty well. Balance is good and the machine has plenty of power. The grip teeth are steel.

This saw requires a wrench and screwdriver. I've really been spoiled by my E-go saw which requires no tools at all.
........
The jury is still out on this one. I will have to wait until I get a large tree job.
.......
I ordered it from Canadian Tire,  five months ago. I got the saw, along with a blower that takes the same type of battery. Each tool comes with a battery and charger. 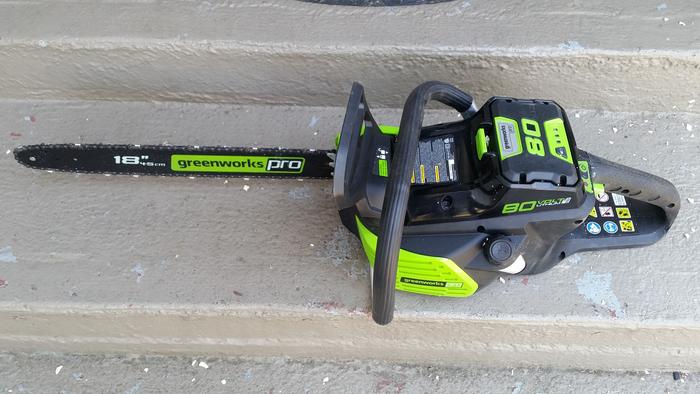 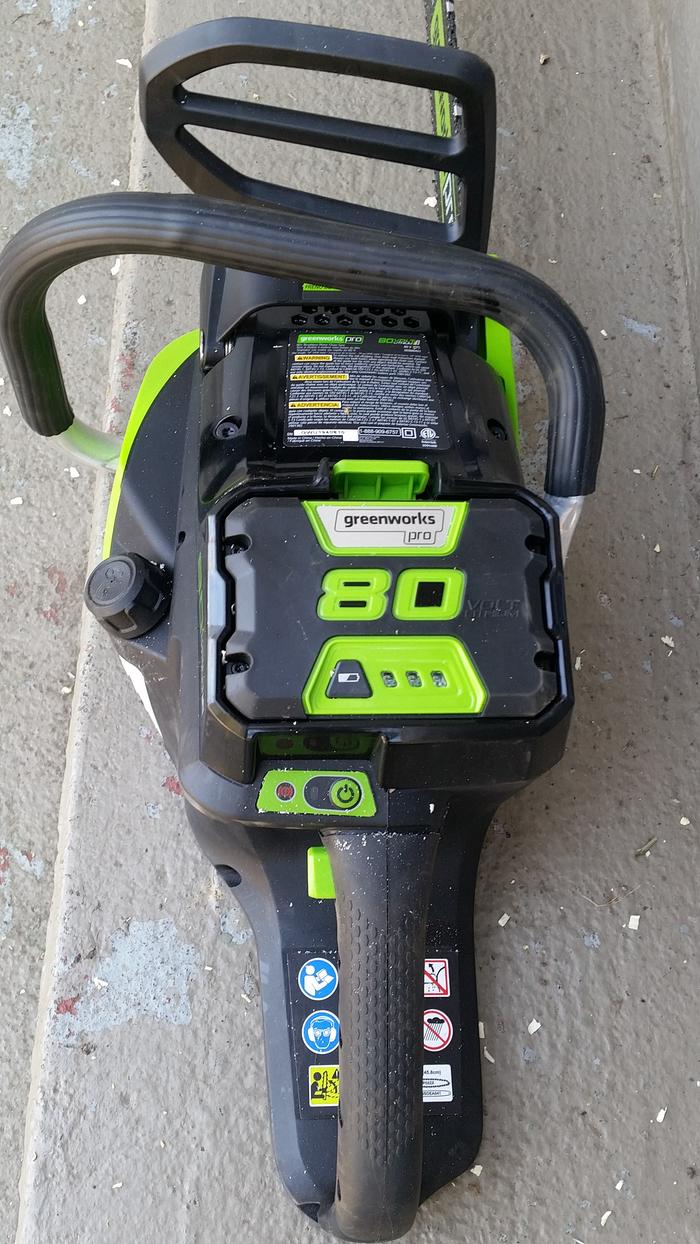 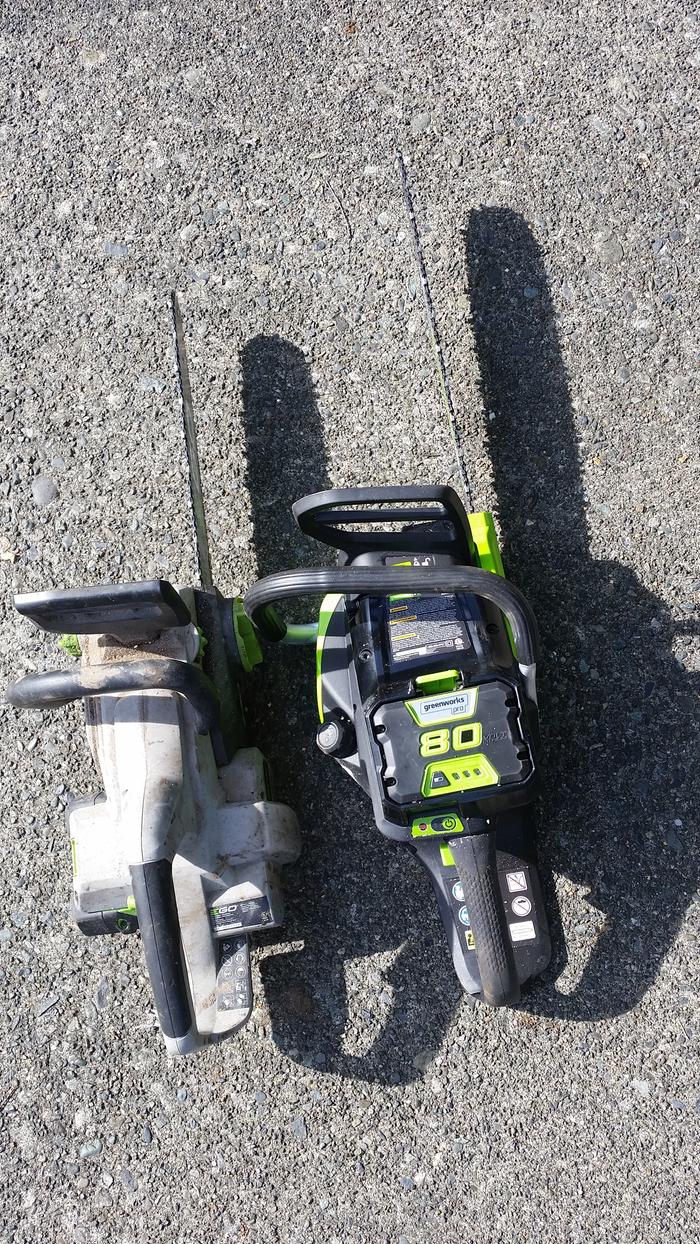 posted 4 years ago
How is the weight. compared both to the Ego and similar sized gas saws? I've seen some in stores but they never have the battery in them so its hard to judge.

Also, how small is the oil hole compared to gas ones? I know I hate the placement of the bar oil hole on gas saws - they're always in a place where in order to pour you can only pour from one direction and its hard to see the level so I often overfill and spill.

Dale Hodgins
Posts: 9002
Location: Victoria British Columbia-Canada
666
posted 4 years ago
The oil hole is comparable to that of gas saws.

It's 3.7 lb heavier than the E-go. This review has a table at the end, comparing the stats of the most popular saws.

Have you got any further impressions of this saw?


I'm pretty close to pulling the trigger on a purchase of a cordless saw, and am torn between this and the Ego. The price isn't massively different between them.


A major point in favor of the greenworks saw, in my mind, is the variable speed trigger. I'm currently using a borrowed Stihl 025, and some of what it gets used for is cutting tenons on roundwood posts; I think I would miss the variable speed for this.

Other than that, I'm kinda attached to the idea of real bucking spikes, vs cheesy-looking plastic ridges on the Ego.

From what I've read, with a 2AH battery in each saw, the ego will run about 1/3rd longer. So, the greenworks saw is running at nearly twice the wattage of the Ego if it can use up ~43% more watt-hours(due to the higher voltage) in 3/4s of the time.


So, in the real world... do you see a big power difference? I've read your glowing thread on the Ego, so any further comparison info would be much appreciated.
Dale Hodgins
Posts: 9002
Location: Victoria British Columbia-Canada
666
posted 4 years ago
Time between cuts wastes more time than a slightly slower cut does. There are days when the saw is in my hands for hours. Weight becomes important.

For general-purpose use,  I choose the E-go saw every time.

Although it is a little slower, it is lighter and very maneuverable. The tool-less aspect saves time. The trigger is more user friendly. No start button to push.

I have only hit a rock once in the last two years. I did it with the 18 inch Greenworks saw, on a cut that should have been done with the smaller saw.

If you only have one battery, you will be limited to cutting about two wheelbarrows full of firewood on a charge. I needed all four of the E-go tools. With that many batteries,  they charge faster than they are drained. Even if the wood is nowhere near power, four batteries is enough to cut wood to fill a pick up truck.

Maneuverability of the smaller saw is important when I'm doing demolition work. The smaller chains are about half the price.

For large trees, the Greenworks saw is better. Again, all cordless tools are more useful when combined with numerous batteries. Greenworks has several other tools that come with the same battery and charger.

D Nikolls
pollinator
Posts: 1340
Location: Victoria BC
166
posted 3 years ago
After finding the fixed-speed trigger on the E-go annoying, I'm planning to try this one next, but the short warranty was really putting me off.

Looks like I've found a possible way around that; the 80V 'Kobalt' branded tools that Lowes carries appear to be the same as the Greenworks(on which crappy tire has a monopoly on in Canada).
https://www.lowes.ca/chainsaws/kobalt-80-volt-max-volt-lithium-ion-li-ion-18-in-brushless-cordless-electric-chainsaw_g2653903.html?searchTerm=kobalt-80v-chainsaw


The Lowes site lists a standard 5 year warranty on parts/labour. No mention of it being shorter on the battery, but that might be in-store fine print...

Unfortunately there's no location on the island yet, but one is opening @ Tillicum sometime this year, in theory.

If/when get it, I'll check compatibility with the greenworks batteries, since my dad has a greenworks 80V blower I can borrow.