Earthworms & the mechanical functions they perform in the soil

Kevin Franck
Posts: 92
Location: Göteborg Sweden
2
posted 5 years ago
I actually started a post on lawns and my take on them coming from a professional level out in the west where water is hard to come by and if available, even in abundance, it's outrageously expensive. I have a fascination (okay obsession) with all things underneath the ground and how they work. This is true whether it's biological or operation of physics. In my lawn post I found that the subject of earthworms was too big a subject to give token mention in my post, so I decided to write a separate post on them and all they do for soils, beyond the obvious nutrient capabilities. surface pore percolation and subsoil infiltration are also fascinating. I've posted a number of interesting and informative references at the bottom of this post﻿. I've always hated lawns in the past, but I wished I had known some things i do now to experiment with. I'll explain in the next post.

Earthworms and the mechanical functions they perform within the soil

This a also a little bit related to my interest in Hydraulic lift and Redistribution in the soils. 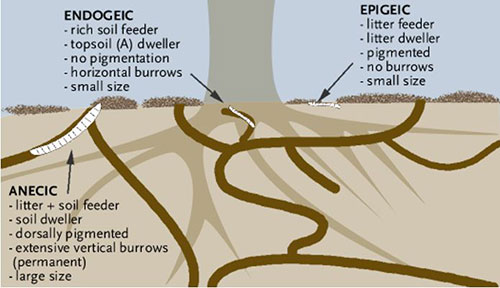 Dan Kline
Posts: 15
Location: Virginia, USA
posted 5 years ago
Interesting article and well written.
I read all I can about worms. My Red Wigglers produce about 500 gallons of vermicompost annually in my big bin. This gets mixed with biochar and applied to my potting soil and directly in garden beds. In the garden soil I have common earthworms and the Alabama Jumper, along with European Night Crawlers. The Red Wiggler seems OK in soils where I have a good biomass on top. I also encourage a worm predator, the toad. It eats a lot more than worms and provides many soil benefits.
About the farmers in Oregon & Washington: My take on the controversy over worms there is not that the farmers oppose the worm. They oppose governments telling them anything. Nobody is more independent minded and freedom loving than a Western farmer. I grew up with them in Western Colorado, and though I no longer live there, I understand them. The radical environmentalists have zero tolerance for threatening the worm. Some farmers have zero tolerance for governmental intervention, as in the EPA etc.

Revisiting Eden... A creationist considering the earth, and the little spot I own.

posted 5 years ago
Thank you for posting this on permies. I have been developing a no till system that keeps them warm/cool and damp with food to eat. A carpet garden. for the discussion or just watch the video.