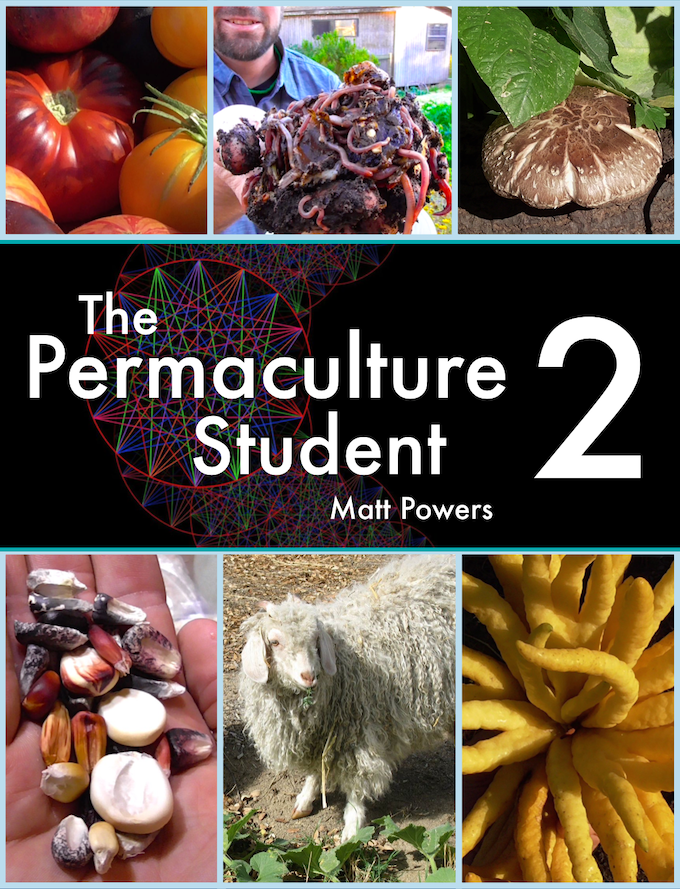 Please support The Permaculture Student 2, the first high school textbook designed to teach students how to live regeneratively with permaculture. The first volume is already in schools all over the world and is being translated into over a dozen languages. This is the next step, and schools are ready and waiting for it. I can’t wait to send the books out to everyone, but we need your help. Your donations pay for the artwork, shipping, and printing for the books as well as earn you a copy of that book or another reward. I can’t tell you how much I appreciate your help, so please donate & share this campaign.

Check it all out here:
https://www.kickstarter.com/projects/mattpowers/the-permaculture-student-2 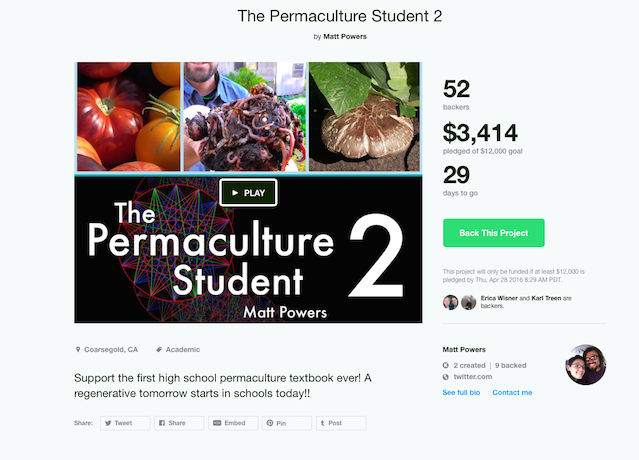 Please come & support the first permaculture textbook for high schools ever!!! It's peer-reviewed, endorsed by those you know & love, & it's the most up to date and comprehensive textbook yet!

posted 5 years ago
Hey Matt. I bought the first Permaculture Student book and have been very pleased with it! I am excited to get this new book but was wondering whether you could tell us a bit about your process for keeping the ideas fresh, building on existing knowledge and avoiding repetition for kids who have already been exposed to the first book.

Matt Powers
Posts: 371
Location: Guerneville, CA
39
posted 5 years ago
Superb! I'd love to write about that!!

Process on The Permaculture Student 2:

So my process is I made volume 1 to be a clear, academic reference, so the definitions are based entirely on principles and examples are more generalized and the entire form of the piece streamlined because I didn't include data figures, detailed examples, and detailed, conditional situations all of which come with application, right? So the first volume is really an introduction that is a perfect foundation for all permacultural understanding. That's part of why it took over 500 editors. The process this time has actually taken much longer as I've had to get more information and education often from the experts themselves or the expensive textbooks that all of us hesitate to buy (well I bought them since I'm a business and it's a tax write off!!

) I've been sourcing the most recent, up-to-date books that take Bill Mollison's great work and updates sections, adds sections, and rewrites sections. Here are just a few examples: we have an entire Fungi chapter and it will be reviewed by Peter McCoy, author of Radical Mycology, we'll have an alternative energy section reviewed by Troy Martz and the Ernie & Erica Wisner, I've rewritten much of what Bill wrote on soils simply because of Dr. Elaine Ingham's groundbreaking (pun intended) research, we'll have a large landscape repair section checked over by Neal Spackman who will also be looking over everything, and we will be included Holistic Management for Decision Making & cattle management as well as Keyline according to Darren Doherty. There are literally dozens of experts involved. Many of the folks from the last book are also helping again - it's really exciting. This book will include information from Eric Toensmeier's new book Carbon Farming as well as Priority One by Alan Yeomans (yes, PA Yeomans son!!) as well as The Urban Farmer by Curtis Stone and the Permaculture City by Toby Hemenway.

My process is basically what it was as a teacher: identify the key criteria, organize it so that it is as widely understandable linguistically yet keeping it on grade level cognitively, organize it in a framework that builds structured meaning as you learn, iterates to remind without being repetitive, and is rooted in real-life examples that pair with principles to give students a working example that they can apply to new situations. I am in essence a filter and a picture frame. The least influence I have over the truth the better; I just need to get out of the way between the truth & their consciousness.

Since I've always been sourcing richer materials than what I put out, and because I've been teaching at different levels for so long, I was able to just move up a cognitive level & expand the content without much difficulty.

All in all it's really really exciting!

I hope you all check it out! I'm trying to keep it as current and as thorough as possible by including everyone on the scene in its construction and review.

posted 5 years ago
Cool. This is what I'm looking for: "iterates to remind without being repetitive".

Keep up the great work, Matt!