posted 4 years ago
As I have posted on my personal thread, I enjoy orchids for their aesthetic value. The Cattleya Trianae, also known as Christmas Orchid, is the national flower of Colombia and orchids have become part of the national culture and identity even though most people really know very little about orchids. I have some orchids in my balcony in pots and some on my small piece of land attached to trunks.

I attended an orchid cultivation workshop about ten years ago, years before I heard of permaculture. One of the first things I remember the instructor saying was that most orchids are epiphytes, i.e. they grow on (more specifically attached to) other trees or plants, although some grow on rocks, in soil, and probably other media, thus to successfully cultivate and care for orchids one must emulate the way they grow in nature. This seemed perfectly reasonable to me (and today I view it as a permaculture kind of thought) and so did the explanations on how to achieve that, at least at that time. However today I realize that many of the techniques explained on the workshop are not natural at all, e.g. using media such as polystyrene or conifer bark within the pots because they are slow to rot, or using diluted chemical fertilizer to emulate the natural way orchids obtain their nutrition in nature, or using insecticides or fungicides against possible pests.

These techniques have stayed with me even after beginning to study permaculture (I never used polystyrene though), but I've gradually started to make changes in the way I care for my plants in order to really have them be in conditions closer to nature.

I have stopped using chemical fertilizers for my balcony plants. The idea that most orchids should be grown in slow decomposing and poor water retaining media comes from the fact that in nature most orchids grow attached to tree trunks, where their roots dry quickly after a rain. If an epiphytical orchid were put in heavy soil with little air and a lot of organic activity its roots would rot and the plant would die. So most people use fir bark (or any other slow rotting bark) as medium, sometimes mixed with rocks, charcoal and even plastic and provide fertilization via a diluted chemical fertilizer. I figured compost tea should be a great fertilizer for orchids, but I water my plants with a spraying system and I have no way of delivering the tea through that, so I simply decided to spread a tablespoon or two of worm compost on top of the growing medium close to the roots so that every time I turn on the sprayers a little bit of the nutrition from the compost will leach onto the roots. This worked wonderfully and saves me time and effort. Most plants have responded very positively to it with new strong growth and one in particular that hadn't bloomed since I bought it three or four years ago just produced new and amazing flowers (a specimen of Coelogyne Tomentosa, unfortunately I don't have pictures).

Now I'm thinking of ways to shift from the bark into a better medium. One alternative is to remove them from the pots and tie them to pieces of trunk (this is really one of the methods normally recommended that actually mimics nature). The advantage is that as the wood decomposes the orchid can get some nutrition from it, but the disadvantage is that the roots will dry out more quickly so they will require more frequent watering, and they will probably still need some additional fertilization which will be more difficult without something to hold the compost. Maybe I'll try small pieces of wood (wood with bark attached) in the pots, this seems like a good combination of both techniques. As the wood rots more attention will be required to ensure that the roots don't rot with it, but I believe that having them in clay pots will help them to dry quicker than in plastic pots.

Anyway, that is some of my experience. But my objective with this thread is to create a discussion about the role that orchids can play in a permaculture design. Even though orchids are seen normally as only ornamentals, the orchid family has around 27,800 accepted species that inhabit almost every land ecosystem in the planet, so I imagine there must be many species that have uses far beyond aesthetics (I don't think that having some ornamentals just for the sake of it goes against permaculture design though, at the least it adds diversity). If they are so widespread in nature, why shouldn't they have a place in our systems also?

Almost everybody knows vanilla even if they don't know that vanilla beans or pods are actually the seed pod of an orchid of that genus. I believe that Dendrobium and Cymbidium flowers are edible and apparently some pseudobulbs might be edible too.

Orchids are very easy to set up, require no care at all when outdoors attached to a tree, and I believe they can perform different functions in a system:

- Attract pollinators and beneficial insects. (some species have evolved to have very specific pollinators, like the mormodes below with a euglossa green bee)
- Provide habitat
- Occupy spaces that aren't always occupied with vines or other aerial plants
- Add diversity to the system
- And of course they have beautiful flowers.

I would love to hear other people's thoughts on this matter. Do you know of any other edible or medicinal uses for orchids? what other functions have they performed in your system? what have you observed from orchids in the wild?
Mormodes_and_Euglossa01.jpg 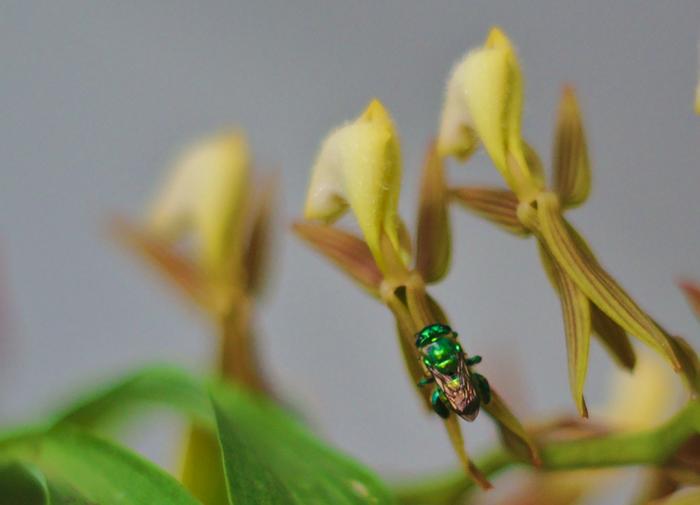 I also write a blog (in Spanish) about urban cycling @ https://medebici.blogspot.com

posted 4 years ago
Orchids are beautiful. They do attract pollinators. For northern climates where you are stuck inside all winter, they help clean and moisten the air (actually you do, by watering them and other plants). They definitely add to aesthetics. The leafs provide shade and old flower stems a home for small bugs/bees. Where to keep vanilla orchids? They like warm, moist air - i.e. tropical conditions. However, there are orchids that are native to cold climates as well. The trick to moisture care for irrigated orchids is that their care is similar to a succulent - in fact, they kind of are succulents - they store water in their leaves and roots. Therefore they do not need to or want to be constantly in moisture. You can tell a dehydrated one by the floppiness of the leaf. That said, I put one in an in-door fairy garden (you know, summer fairies like sneaking inside during the cold winters here). It is doing quite well next to a few cactuses and a citron (also drought tolerant plants). The top 3 inches are wood chips, that is followed by cactus medium, and that is followed by regular old planting medium. I water every month or so, I think. (I.E. a healthy amount of neglect).

I wish I knew of more edible/medicinal orchids, but all I know of is vanilla, which requires a consistent 80 degrees + humidity, and we don't shower enough to make the bathroom fit this environment.

posted 4 years ago
Imagine my joy when I recently found a wild orchid growing in my property. If you are interested you can read about it here.

I also write a blog (in Spanish) about urban cycling @ https://medebici.blogspot.com