Mobile Home inside a Building

Please read this article:  http://www.accuweather.com/en/features/trend/5-ways-people-stayed-cool-befo/58416291   It sort of sums up my research into the 1800’s though it is written after I had finished.  I decided that I wanted to stay cool in the summer and warm in the winter using 1800 technology.   I did this at the time because I was the Queen of Cheap.   And not out of concern for the environment.  That later changed.  However, the effect was the same.    I spent a lot of time researching 1800 heating as well.   Basically, I decided to spend $$$ making it so I didn’t need to spend $$$ to stay comfortable.

Without going into a long, painful story of 16 years of construction, I will tell you the end result.   My main insulation is just plain air and large amounts of airspace.   The upper roof is 6’ higher than the trailer – most people can stand on the trailer without hitting their heads on the upper roof.   I wanted a steep roof to shed snow, but I wanted a high roof to create air volume – as they did in the 1800s.   I did install 2 solar ventilation fans from Lehmans.   Those run all year round, but their purpose is to keep condensation and moisture from accumulating in the space.   They are not powerful enough to keep the space cool.

The roof transfers no snow load weight onto the trailer.   It stands on “stilts” which are 8’ apart all around the trailer.  The lowest edge of the upper roof is about 1” higher than my trailer’s roof.   This means that I can replace the trailer should I decide to do so – but the real reason was that if the trailer was locked in, it was no longer considered a “mobile home” and lost its tax deduction status.

The trailer’s roof was untouched – and is quite intact under the upper roof.   The upper roof and the trailer are sealed together to prevent rodents, snakes, etc. from nesting up there.

This is how I heat & cool the trailer by using 1800's technology.   The upper roof has a massive amount of air space in it.   This is intentional and copied from 1800’s technology.   During the summer, I open vents in the upper roof – heat rises, so this creates a chimney affect in there.   There are vents running along the inside of the porches so hot air is sucked from them as well.  There is enough space between the 2 roofs, I think 6’, so that heat has to work hard to warm the trailer’s roof.    In addition, even though the windows are huge in the porches, I drop blinds on both the inside and outside of the window panes.   So the porches are shaded.

Blinds cover the massive porch windows on both sides.   The trailer itself is completely shaded by the roof.  When I step out of the trailer, the porches do feel hot to me; however, when I actually go outside it feels like a sauna.   At night, I open up vents inside the porch floors to create the chimney affect.   I take advantage of the cool by ventilating both the trailer and the porches at night.

I “heat” the trailer in the winter by taking down the outside blinds, and raising the interior blinds.   Now those massive windows act like a green house.   I close the vents in the ceiling.   The solar vents run still though – their purpose is to keep moisture from accumulating between the trailer & upper roof.   Anyway the porches average about 60° during the daytime if the day is sunny - despite the temperatures outside being well below freezing.    Trees can be absolutely dancing in the wind with a wind chill below -10°, but because there is no wind hitting the trailer at all, I don’t even feel a chill.   Just before dusk, I drop heavy blankets over the windows.   These are the kind that movers use to protect pianos.   They have an “aluminum” side that I have facing towards the trailer.

Inside the trailer I am using kerosene lamps for light, as well as incandescent.   The fact that there is less light because of the roof means that I do have to run more lights.   So this might be in part some of the heating.    I do use an electric mattress pad to prepare the bed for my arrival, but generally turn it off when I arrive.   A lit kerosene lamp in my study is sufficient to keep it around 75° and I need the light to read.

On frigid days of -10° followed by a cold night, the trailer sometimes goes as low at 45° in the am.   However, I am basically lazy.   The fact that if I light a fire means I have to open windows to let out heat sort of makes me patient to allow the sun to heat the trailer.  However, if the day is cloudy – I light the fire and open the trailer windows.   The heat is trapped on the porches.   When the fire finally starts to cool down, I close the windows.   The trailer stays warm the rest of the day and into the night.

So basically, with a bit of my help, the building surrounding the trailer has stabilized the temperature of the trailer.   The main “insulation” is just plain lots of air space.   The insulation put in the upper roof was required by Maryland, I think it’s about an inch, but I don’t really know.  I don’t think it has any significant affect though.

The first year I lived here the trailer was just a normal trailer.   It had a forced air furnace that burned propane.   I moved here in December.   I went through 500 gallons of propane and had $200 electric bills keeping warm.   The second year I had a metal roof put on and switched heating to wood heat.   I had to run the woodstove 24/7, and if the fire went out – the trailer only took 2 hours to be the same temperature as it was outside.   As cold as the trailer was in the winter – it was hot in the summer.  I had 3 window air conditioners running all the time just to keep from melting.

posted 3 years ago
Lastly, the dam side of the trailer enclosed.   (Dam as in water - not cuss word.   Shame on you!)
Rear-View-Trailer-Pre-siding-new-generator.JPG
Dam-Side-porch-and-siding-finished.JPG
Interior-Temperature-60-outdoors-18f.JPG 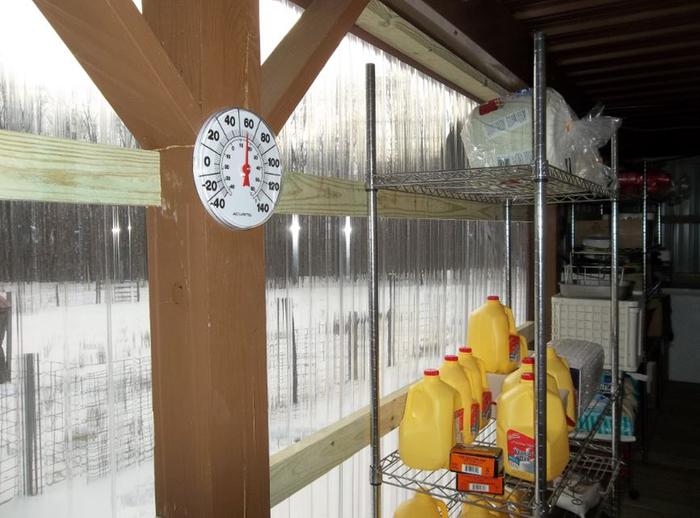 posted 3 years ago
By the way, though we do have 9 months of cold and 3 months of bugs - we really don't have as much snow as my pictures would imply.   Apparently the only days that the camera whispers my name is on snowy days.  And, because I cannot resist, here are pictures of totally awesome moments.  Like the day I watched a fawn being born and was able to sneak off, get a camera, and have her still there despite my window being open.
Deer-gives-birth-under-my-bedroom-window.JPG
Blackys-last-picture.JPG
Snow-Higher-8-foot-high-and-higher-than-window-no-heat-needed.JPG

posted 3 years ago
Plans for the roof trusses.
3180-Roof-Truss.png

posted 3 years ago
Great stuff! For some reason that link didn't work for me. This is an alternate: Five ways people stayed cool before air conditioning
Nancy Troutman
Posts: 186
Location: Swanton, MD
13
I like...

chip sanft wrote:Great stuff! For some reason that link didn't work for me. This is an alternate: Five ways people stayed cool before air conditioning

Thank you Chip.   I am editing my post so it displays your address.  The article your post chose is the exact article I had meant to link to.

posted 3 years ago
I should mention a few things I would have done differently now, or wish I had a solution for...

1.  I had to hardwire doorbells on every exterior door of the larger building - because I could not hear visitors knocking no matter how hard they tried.  I put up a sign saying "Blow Horn", but if they walked or came via horseback, they could not get my attention.  The battery doorbells didn't work well in frigid weather, and I was too lazy to replace batteries anyway.
2.  No cell phone service.   I am obliged to maintain a landline because of it.   This probably is a result of my selection of tin as a building material.
3.  I have 3 entrances to get inside the trailer itself.   All 3 involve an immediate 90° turn due to the exterior building.   In hindsight, I wish I had made at least 1 entrance to the trailer and the exterior building in line with each other.  Now I cannot add or remove couches or any other large pieces of furniture that cannot make the 90° turn from the trailer.
4.  When I heat via the woodstove, and open the trailer windows, the windows on the exterior building instantly fog up, then frost up, and stay that way until the outside temperature goes above freezing.

posted 3 years ago
Wow! Thanks for posting this! I bought a MH with a large roof over that I wish was more than 18" taller over/above the trailer... But it's given me some more ideas... I do get good benefit from added roof and in FL keeping cool most important.
Eta... Love your transportation!
John Weiland
pollinator
Posts: 1425
Location: RRV of da Nort
185
posted 3 years ago
Great photos, cool idea and great tutorial....thanks for this post.  It's probably come up before, but in our region it's becoming more common to see people buy a plot of land, erect a large steel pole building first, put their RV or camper-trailer inside and use that as their dwelling while getting a foundation prepped and a home built.  It would certainly be the way I would approach building on any new land purchase. So a home within a building is a great idea from many angles.