Jennifer Bresee
Posts: 11
2
posted 3 years ago
Hi Permie people! I have questions. But first I want to say how grateful I am for this forum! I've learned SO MUCH from reading through all these great conversations about RMHs. Thanks!

Background: I'm living in a tipi in NW Montana and I want to keep from freezing overnight by sleeping on a RMH. I have taken a basic play-with-fire class from Ernie and Erica in Santa Cruz, CA, and helped a little in building the RMH they designed for a house in Bonny Doon, CA. I bought Ianto Evans' book, read it a couple of times, and downloaded Ernie and Erica's Annex 6" plans. AND I found a local friend who has built 5 RMHs of his own! And that's when I started getting confused.

My friend heats his home through -15°F Montana winters with a very atypical RMH. The burn chamber is in the basement. The insulated heat riser is very tall (runs from basement to 1st floor) but still exits into a 55gal barrel and a short horizontal manifold before going into the vertical mass that extends to the second floor. But basically, he built it using Ianto Evans' numbers for an 8" system and he says it rocks.

He built all his other (horizontal-run) stoves with 8" CSA cores and says when he's experimented with 6" or less he's seen a much dirtier, less-efficient burn. He also says that a bigger core will result in more BTUs pumped into the mass faster, for a quicker heat-up time. He considers anything smaller than 8" to be a compromise on the power of RMHs. BUT! He has used 6" flue with 8" cores and says they work great! He said that the height of the final exit flue makes more difference than consistency in CSA. Enough rise and the warm air creates enough draw to make up for the greater drag of a smaller flue.

So this is my confusion. I always thought the golden rule of RMHs is that the CSA of your flue must always be the same or greater than the CSA of your core. How can that be true, if the 8"-to-6" systems work? One idea I had is that his cores are all brick, and thus square, and so the turbulence might result in an effectively smaller CSA of moving gasses, making a smaller flue possible?

I want to design for 6" flue because it's way easier to find, but he recommends an 8" core. With a flue that exits through the smoke flaps of the tipi, I'll have a pretty tall rise and respectable draw when the air in the flue warms up. Any opinions?
thomas rubino
gardener

posted 3 years ago
Hi Jennifer;  After you enter your horizontal mass with a piece of thick wall black stove pipe you can the switch to HVAC pipe (thin wall)  Your surrounding your horizontal pipe in cob so you do not need the expensive thick wall pipe buried in your mass, its going to rot out after a number of years anyway so your really using it as a form for your clay (cob) tunnel.  This pipe is readily available most places , a 5' long piece of 8" hvac is $11.00 at home depot. If you build your RMH as an 8" run 8" hvac thru your mass , use one more piece of 8" thick wall black pipe to vertically exit your mass  then back to 8" hvac as you rise . At that point you can use a 6" pipe to exit your tipi  With a tall vertical rise like you will have, one piece of 6" at the very top will not restrict  your flow. Not sure where you live but, we live in trout creek past thompson falls. You are more than welcome to come see ours in action .
R-87_01.JPG

Jennifer Bresee
Posts: 11
2
posted 3 years ago
Hi Thomas,
Thanks for the info and the generous offer to check out your system! The photo is great. I live in Whitefish, about 3hrs NW of you, so it'd be a bit of a trek to come out, but thanks!

So it sounds like building an 8" system is totally feasible. Great! I'll do some redesigning and see how an 8" works in my space, at least on paper. It still sounds like the rule of CSA consistency holds, more or less. What about my friend's systems that go from 8" to 6" flue? Any idea why they work?

posted 3 years ago
Sounds like your friends system is a hybrid, a really cool one. Not for a beginner. Talk him into showing us here at permies (with pictures) what he has built !  I believe that in most cases,  an 8" system with a warm indoor pipe, with a good vertical rise and less than the maximum length of horizontal run would have the power to exit thru a 6" pipe if necessary.  Location & prevailing winds could play a big part in how well this works.
DSCN0738.JPG 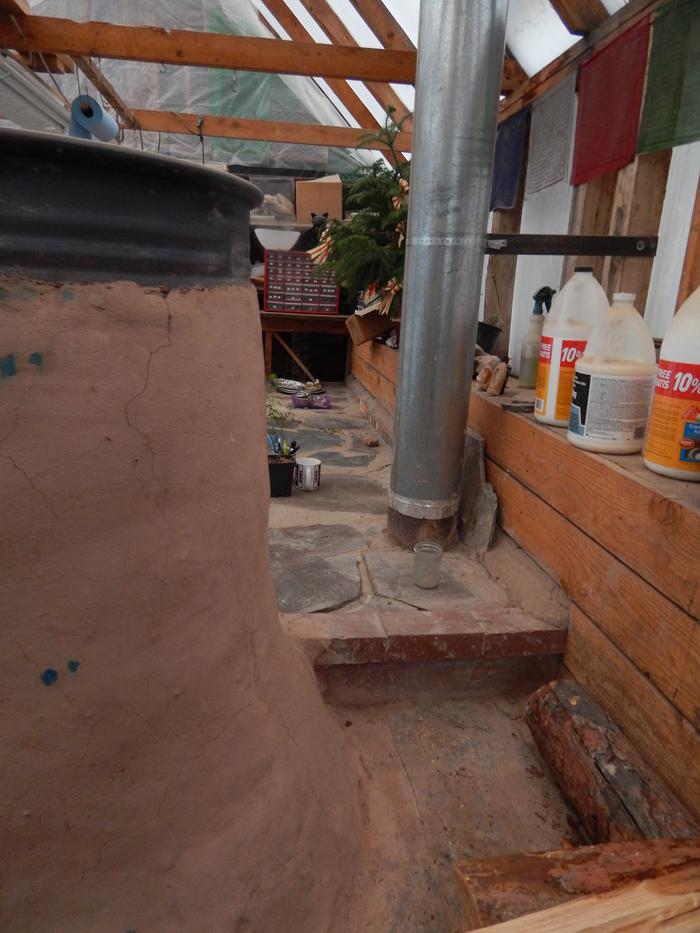