Allison Rooney
Posts: 42
Location: Shields Valley Montana
2
posted 9 years ago
We've housed our poultry in the most ramshackle strawbale huts you could imagine for the past four years, on a cold wide open windy prairie at 5300' elevation, but boy are they cheap, compostable and highly effective, and despite their humble digs, the mixed flock of layers, ducks and turkeys seem quite content!

Though not too exciting to look at, the strawbale huts we made for the poultry are amazingly warm and cozy for the birds. This morning the temp inside the various compartments was possibly 50 degrees, while outside it is -10 with a wind chill. The snow has drifted around the chicken palace, so its like an igloo with 16" thick walls. This hut cost about $16.00 to build and the heat is free!

We use 18 bales for the hut (more to cover the various openings and create wind shelters)....they are stacked two high in a sort of backwards "E" arrangement, only with three compartments...(hopefully you can visualize)...the opening of the compartments are oriented ALWAYS to the East......so the birds wake up to a warm morning sun, and the prevailing winds don't blow in. (On this note, any birdhouse you have will be much more bird friendly oriented with the opening to the east for the same reason) This keeps the shelter from cooking in the summer too, cause the sun never shines in from the south or west. The northern endwall of the E is stacked two bales high and long, so the north winds are blocked a bit from wrapping around into the shelter, and the extra length here blocks an opening that the lean-to door makes. For the top we used a couple of sheets of old plywood, with one cinder block on each piece for weight, just laying flat across the top(I move them aside, and reach in to the back to collect the eggs)... and at the back side (West) we added another 4x8 sheet of plywood as a lean-to shelter. This area is getting drifted, so the snow=more insulation for the entire structure, and it's keeping the snow from blowing in through the gaps in the bale walls. For the front doors more 4x8 plywood is used in a lean-to fashion, and we've also used OSB, whatever we scrounged up. When the weather started turning wintry cold, we used additional bales stacked two high strategically placed at the lean-to openings (south end) to block wind. Before dark I move the bales to block the openings completely, and they are snug and the heat builds up in there quite well. Other things we've noticed about using bales for shelter...when they get musty or start to break down, we take it all apart, and break the bales open. The birds are SUPER happy to kick all that old straw up and around and poop it up. They are our little mulcher fertilizers! Then we build a fresh one. They do tend to roost on the roof, and really poop alot up there, but its pretty easy to pull the top off, scrape the poo off, and clean it up, putting the poo where we want it. Modifications I think would make this a class A set up are a nesting box array that is built to fit into the strawbale stacked wall...sometimes the girls eat eggs, and I think that is because the nests are at ground level in the same space they rest in. I would try to build it to rest on the bottom tier, but come up to the same height as a second layer of bale wall, if that makes sense. I have also been considering building a shed roof piece that has poly carbonate for the straight eastern facing wall, and sheet metal for the shed roof, you could anchor this down by pounding in some t-posts at the N and S ends of the structure, and securing the roof to the posts. I also think you could use scraps of sheet metal on 2x4 frames for the roof and lean-to doors and they would be easier to wash down, and longer lasting!  I've debated alot the virtues of a framed/plywood sided chicken house...and while I think the mobility of a framed structure would be much more efficient, the strawbale huts are not bad to move with two of us doing the job, and they are such great shelter in the winter...for us that's at least half the year, that I'm not sure anymore I want to give this method up. 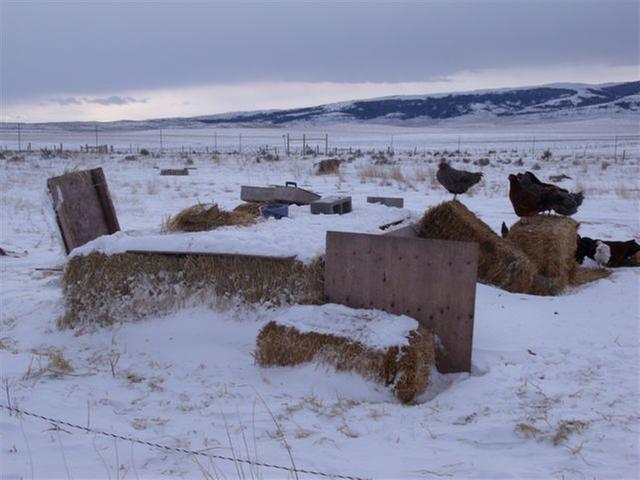 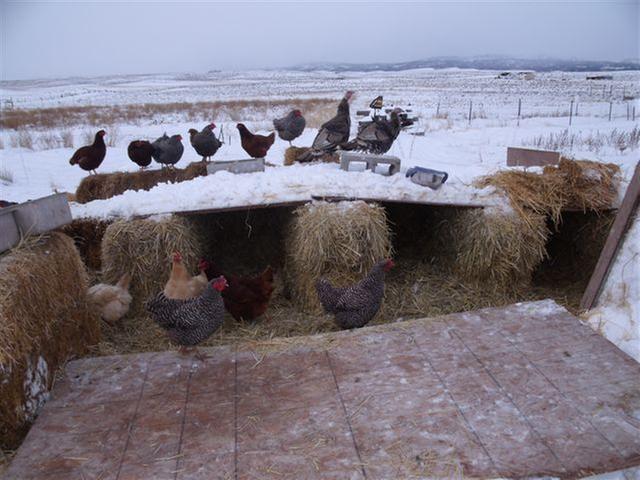 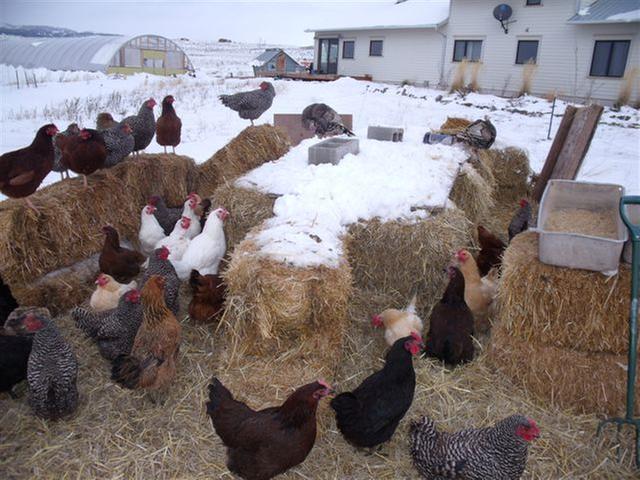 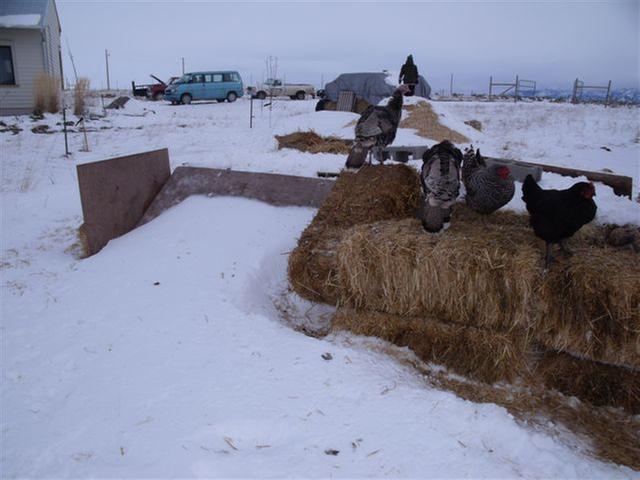 One easy (in keeping with your theme) way to add nest boxes would be to put a board running at the back of your open areas, laying in between your first set of bales with your second set on top.  On this board sit plastic stackable-vegetable-bins, screw a screw right through the base of the bin into your board to secure and later easily remove as needed. Place some clean straw in the bottom of the bin making it a perfect nest box.  This is now one bale up off the ground and at the very back of your open bird area, but you may find the need to stack the bales on their sides in order to give just a bit more height to make this work better.

The only issue I foresee is that your birds may want to roost in the nest boxes at night.  I get around this by having a roosting board 2x3 across the back with two nesting boxes set up on each side in front of the roosting board.  They prefer roosting on a branch/board but will go for the nest boxes if the branch/board is not available.  So you may want to play around with this until you get something that works for your situation.

I'll look and see if I have any pictures.

One other thing to consider regarding using sheet metal - it does have dangerous edges, not sharp and yet it can easily cut.  The corners however are sharp, and it is overall floppy and can be heavy if the piece is larger making handling an issue.  Since your situation calls for moving of the pieces I would take all of this into consideration before switching from firm, non sharp plywood.  I almost lost the movement of one of my fingers from cut tendons, by simply moving a 2' x 10' piece of sheet metal.  When it's cold slips can happen and I wouldn't want to see you hurt.

Lisa Paulson
Posts: 258
posted 9 years ago
I am using some old discard hay bales right now stacked to insulate a small off ground chicken coop and redesigning some walls in my barn to stack hay bales inside against outer walls to insulate other livestock stalls and stored emergency water.  My plan is that as spring draws near and I  start using up these stacked hay bales  insulating the loft floor above the animals and along the walls .  the idea of a warmer barn is for my own comfort and to diminish the amount of feed the animals need to maintain body weight.
Drew Carlson
Posts: 31
Location: Zone 5a Southern Wisconsin
posted 9 years ago
What is you predator situation like?
Allison Rooney
Posts: 42
Location: Shields Valley Montana
2
posted 9 years ago
we use the electric poultry netting with a solar charger.  It has virtually eliminated predator losses.  A few caveats with it, before you think its infallible, though:  in the cold months when snow is on the ground, getting and keeping a good grounded charge is almost impossible.  There have been periods of heavy hoar frost where the fence lost charge all together and predators (a short tailed weasel and an owl, we think) made off with some goods, mainly only the heads and tender neck meat of less than a handful of birds because the fence shorted out.  We live pretty far from a water source so we don't have coons.  We had skunks last spring, but they seemed to go after the eggs, though we eliminated them pretty quickly because they were right around the house.  Surprisingly, we have never known a hawk or eagle to take any of our birds, though we're out on the open range and see plenty of them, at least a couple a day.  My guess is the predator birds shy away because of the big black cayuga ducks that we keep with the layers...their large black bodies must be confusing and intimidating for the hawks.  I'm continually surprised about the lack of predation from the air.  Nothing on the ground messes with the fence 99.9% of the time...no foxes, no dogs.

Jordan Lowery
pollinator
Posts: 1528
Location: zone 7
18
posted 9 years ago
great idea, i like it a lot.