Kid's Project: Keeping Chickens Off the Road Without a Fence

posted 3 years ago
Hi everyone, I need some help.  My daughters are part of an all girl Lego Robotics team which means that they have had to build and program a Lego EV2 robot as well as come up with an innovative design project which would have  a positive impact on animals in some way.  In December they competed at a regional tournament and their project was chosen as the best of the bunch which has allowed them to move on to the provincial competition at the end of the month in Toronto to face 17 other teams.  If they are one of the top 2 teams, they then get to go to the international competition in St. Louis, Missouri to compete for the chance to actually see their idea developed as a product!  Needless to say, they are very excited!

As part of their project the girls need to survey potential customers to see if they have a good idea and determine whether or not they need to make some changes.  I have been a long time visitor to permies and have learned a lot here in the past few years so I thought that this would be a great place for the girls to get some advice!

The Project
We live on a small, 4 acre hobby farm and have anywhere from 20-40 layers at a time that are totally free range. One of the drawbacks of this is that they are always crossing the road.  (I think there may be a joke here somewhere) Obviously this isn’t ideal and is a safety hazard for both the chickens and the cars.   As a result the girls came up with the idea of designing something that would frighten the chickens away from the road before they got there by detecting them and playing predator sounds to frighten them away.  This would be a device that could be moved around quickly and easily depending on where you needed it at any particular time such as ear the garden, porch etc..  I know we need something by the garden in the summer but the rest of the year I am more than happy for them to spend time scratching and cleaning it up for me.  This would  also be much cheaper than a fence and they would  still get all of the benefits of free ranging around the property.  I will let the girls fill you in on the rest.

Our  Design
Our device would detect the chickens using a motion detector like the ones used on outdoor lights or maybe by crossing a laser beam.  Once it detected the chickens it would play a predator sound such as a raccoon, fox or hawk.  The sounds would change each time so that the chickens would not get used to them and the whole device would be totally mobile with maybe a small solar panel to charge the batteries.  You could move it whenever you needed to and you could use sounds that are suitable for where you live.

What challenges do you have with containing your free range chickens?

How do you keep your flock safe and contained right now?

What are your thoughts on our idea? strengths/weaknesses/other considerations

Thank you for all of your help and we will let you know how we do!

Wes Hunter
pollinator
Posts: 525
Location: Missouri Ozarks
76
posted 3 years ago
The idea seems feasible, I suppose, except I have my doubts that chickens would respond to predator sounds, as predators, as far as I know, tend not to announce their presence prior to attack.  Chickens will run for cover if a large object passes overhead (their protection mechanism from aerial predators), but where they run to is anyone's guess.  Assuming they did run after hearing predator sounds, who's to say they'd necessarily run away from the road rather than into it?

We had a similar problem a couple years back.  I think it resolved itself when enough of the chickens got hit and killed.  Bad management, probably, but that's what happened.  My assumption is that the dumb ones got killed, leaving the ones smart enough to stay out of the road.  Curiously, they didn't tend to get hit because they were in the road as such, but because they were in the opposite ditch and would panic when a vehicle approached, running back across the road--and into the vehicle's path--on their way to 'safety.'

Another option might be a good dog.  I've read multiple stories from collie owners about their dogs learning the rules of the farm and then enforcing them on their own.  After a few times watching the chickens get chased away from the road, the dog picks up on this 'rule' and then does the chasing him- or herself.  I've seen this sort of behavior multiple times with my own dog, a collie cross.  Presumably this instinct would be that much stronger with a purebred dog.  And isn't a dog more fun than Legos?

Other options might be stringing up a quick and easy and relatively cheap chicken wire fence, ugly but good enough to keep them roughly contained, and/or make a point feeding them as far from the road as possible.  Scattering whole grains will keep them busier longer than feeding in troughs.  It's also quite likely they go to the road for grit, so make sure they have anothert option elsewhere.
Chris Knite
Posts: 17
1
posted 3 years ago
We have just 6 free range chickens.  I've seen them at least twice bolt for cover when they heard a hawk.  So it sounds like a possible win.
I like the input of making sure it's far enough (and the right direction?) from the road so that they most likely scatter the correct direction.
Stew Haggerty
Posts: 19
Location: Ontario, Canada
1
I like...

posted 3 years ago
The girls are set to test different sounds tomorrow to see which sounds work best.  For us the reason we don't have a fence is that it is just too much money.  To fully enclose our property would take a few thousand feet of fencing and then we would still have spots that we would rather the chickens not go such as the front porch which always seems to be a favourite hangout.  Something that could repel them may keep them out of these problem areas.  How do you keep your chickens out of areas like this?  I know in the garden I am always chasing them out and would like to keep them out until the late fall.

Chris Knite
Posts: 17
1
posted 3 years ago
We have a similar situation.  We could never fence the whole thing.  So we have a small run - made of 3 foot high fence I bought used - that we contain them when necessary. (suspect hawk activity, city kid visits, etc) It's barely stuck in the ground so the two of us can shift it around (for ground health) in about a half hour.  Maybe picture attached.
Otherwise they are loose eating our bugs and helping the soil.  We don't fence them in, we fence them out.  As in, off the porch.  Had to fence off the porch or else it becomes poop central.  Early on in the garden my wife put some deer fencing to keep them off baby plants, otherwise they're loose in their too.  I've read that this can be a bad idea, but the have enough range that (thus far) they don't rip up the plants. 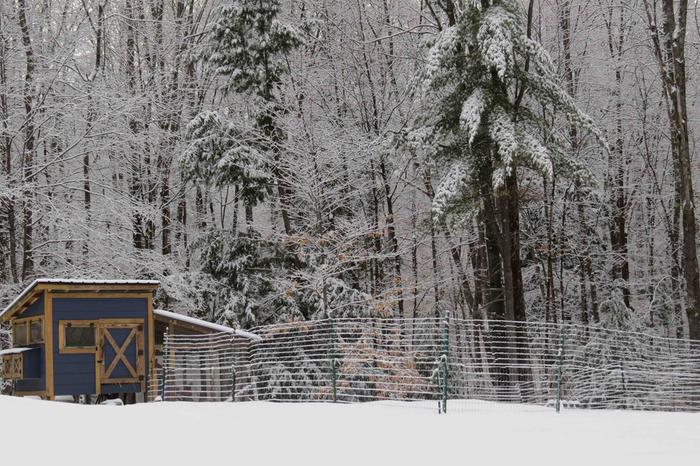 posted 3 years ago
Thanks for your input everyone.  The girls also wanted to ask if you think a motion sensor like on an outdoor light or a laser beam type system where the device is triggered when the beam is interrupted would be a better option on your farm.

posted 3 years ago
The girls did some tests today but quite frankly it wasn't the best day for it.  It was a pretty wet and miserable day and technical difficulties abounded however they were able to get a response from the call of a hawk.  Of course they have all kinds of video of when the bluetooth wasn't working or the chickens weren't cooperating but no video of the chickens heading for the hills when they played a hawks screech! Take 2 later this week. I'm new to posting and I am having some difficulty posting pics.  Can I upload from google drive?

posted 3 years ago
Cool project! I used to build Lego robots when I was a kid - lots of fun! One idea that might help with the chickens would be to make pop up wood predators - sound could be included. Wood predator could be flat on the ground (kids could paint it to make it more fun) and then when the chicken is detected it would pop up to a standing position. It would need to pop up fast (spring system combined with something to pull it back down flat and re-arm) to work but the sudden motion combined with the sound might be enough to scare the chickens back away from the road.

Good luck with the project!