Is this spruce tree dead?

Mitch Thomas
Posts: 1
posted 2 years ago
This pine tree has looked like this for about 2 years. Gradually getting worse. The top 12 feet have zero needles left. And now the lower needles are starting to brown and thin. Is this tree dead or can it be rejuvenated?
IMG_1601.JPG 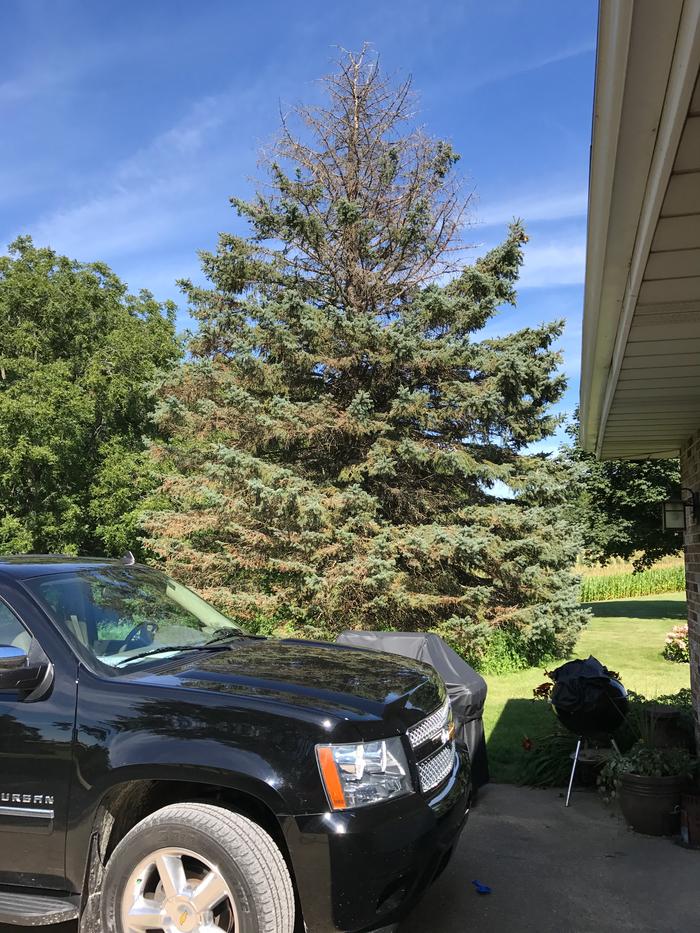 Todd Parr
pollinator
Posts: 1793
Location: Wisconsin, zone 4
95
posted 2 years ago
It's not dead.  There is one that looks just like that in my lady's yard, and has the entire time I've known her, almost 9 years.  I don't know how to fix it though.  I keep telling her I want to cut it down and plant something new, but she isn't having it

Jim Fry
Posts: 307
Location: Stone Garden Farm Richfield Twp., Ohio
23
posted 2 years ago
We've been raising pines of various kinds for 50 years, as nursery stock for sale. It looks like you have a blue spruce. I have no idea of what's wrong with it, but without being there to look I'd guess maybe a bug (or possibly a drainage) problem. (Or sometimes nothing big in particular is wrong, plants/animals just die from a combination of little things.) The tree may last another couple years, but it will never be right. Even if you could figure out what's wrong, the center is gone, so at very best you'd have a spruce bush. I'd cut it down and start over. I'd choose something that grows faster than spruce so you have a chance of enjoying some shade sooner than a couple decades.

posted 2 years ago
Top death like that around here is a surefire sign of bark beetles. Something is inhibiting water flowing to the top of the tree. For bark beetles, it's the larva eating the cambium layer from eggs laid the year before, which means it's only a matter of time before the rest of the eggs hatch and girdle the rest of the tree. The rate of it's decline will vary depending on how stressed the tree is from existing diseases and water availability.

posted 2 years ago
Sadly from the appearance of dead leaves on the lower branches I have to agree with Kyle on the bark beetles.
Keenly look at the bark and you will most likely find pin holes, a sure sign of bark beetles emerging as moths.
The other sure fire method of determining if there are bark beetles involved is climbing a ladder and removing some of the upper, dead bark, if you find larva tracks then you know for sure the tree is infested and will eventually go to the spirit world.

If this was my tree, I would make sure of the problem as I described above, then I would sit with the tree and explain that in order to protect it's brothers and sisters, I have to take it down thus ending it's struggle to survive.
I would then make sure it knew that it was not going to be wasted because I would burn the branches that were to small or damaged to make things as an offering to the spirits. Do try to use all the wood that is not damaged and thus honor the tree's spirit.