posted 3 years ago
Hello, I am new to the site. I live in Eastern Iowa and am in the process of building a tiny home on wheels. We're currently homeless and staying with a friend who is letting us build in his driveway and is offering a safe place for our kitties as well. We've been in love with the idea of tiny homes and sustainable living for quite some time now though regardless of our situation. We just wish we could have dived into this field at a better time in our lives.....

At the end of May my partner and I(and our three year old son) were looking for a new place to move our large colony of cats that had been staying on a farm in an old chicken coop. We had been trying to start a charity recycling metal to raise money for cat rescue, but we've been really struggling for a lot of reasons for quite a few years now. Every attempt to improve our situation has really fallen apart on us. We finally found someone great to work with who owned an extra property in Cedar Rapids in the old flood zone. He loves cats too and was willing to let us set up shop there and house the kitties. So in the beginning of June we started getting things set up for our cat operation there, but we were also having a variety of issues with our housing situation and decided we should build a tiny home on wheels so we could escape our apartment that we couldn't afford.

At the start of June we discovered an RV on Craigslist that had been hit by a tornado(just a flatbed with tanks under it basically) and we had to rig up a hitch on our Subaru Outback to go tow it 350 miles. This was a major feat of engineering itself! I also spent the first part of June learning how to use SketchUp and designed a new framing system that is nearly as light as a square frame, but far stronger and much more modular. By mid-June we had acquired the materials needed for the framing and by the end of June we had about 70% of the frame parts manufactured(but not assembled).

Then we had to rush to get moved out of our storage unit and our apartment before we had to pay another month on either. We just didn't have the money to keep using either place. Our THOW wasn't done however, so we ended up sleeping in our car on the property we were renting for our kitties, and he allowed us to park our RV trailer there and keep working on our parts there. We manufactured our frames as much as possible while there, but things became very difficult when Alliant Energy removed the power lines to the property due to local politics. We spent the two months after that generating our own electricity with gasoline generators which I had to work very hard to keep going. Being your own power company is not easy!!! Especially with generators that are not in good shape and no previous experience maintaining small engines. Eventually I had to completely rebuild the primary generator, even making my own motor brushes to replace the originals. It was a hard way to have to learn all that, but in some ways it was also really kind of awesome.

After another month we got water service there finally, but about a week after that there was one city worker who swooped in and ruined everything. She had us removed from the property by the police and thrown out on the streets "for our safety", and our landlord had to beg for us to get permission to enter and get our belongings out. We barely got our trailer and our kitties out, but thanks to our landlord generously taking us in to his own home we were able to escape the worst of it despite going through hell for a month straight. This brief summary of the hell we went through over this barely even covers it. This year has been a nightmare and in the last two years we've been homeless twice so life has been fairly rough in general.

Anyway, since we have been at his house we've been getting a lot done with access to modern conveniences again. Our framing is up on the trailer and our roof trusses are being built. We are very low on funds though and getting this done before winter hits in full is certainly a scary prospect. We would also like to get a smaller, second trailer to put together a space for the kitties. We also need a better vehicle to tow with since the Outback wont be able to pull it when it is fully built, and it has a bad head gasket anyway. I just don't have time to pull out the engine right now either.

Our THOW is 8x24 on the outside(It used to be a Dutchmen 26B DSL). It is approximately 174 square feet on the inside and will have a very simple open layout. We may have to partition part of it for kitties for a while, but our exact plans for them is very uncertain at this point. We'll be doing cooking, heating, and hot water with a "rocket" style heater system that I am designing. This will be a J-tube style thermal siphon design with a diversion system to allow it to heat our oven or heat water when we need it. We have an ME2012 inverter-charger system and the digital control interface for it, but we do not have a deep cycle battery yet or the money to obtain one. We'll be using mineral wool for the insulation and our intention is to make the place extremely fire-resistant. We have a low-pitch roof and will be covering the top and sides with metal of some kind(budget permitting). Still figuring a lot of things out on this, but we're really loving doing this sort of work and are strongly considering making a business of it when we're able to.

I'm going to try attaching a current picture of the project, but I am protective of my design so it won't be a very revealing one, sorry.
IMG_3851-edit.JPG 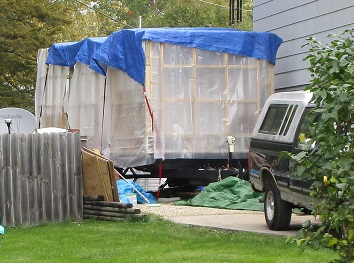 "Most quotes on the internet are falsely attributed" -Attila The Hun

posted 3 years ago
Thanks for the welcome! I look forward to learning what I can here, especially about rocket heaters right now!

"Most quotes on the internet are falsely attributed" -Attila The Hun