Was wondering if people could help us with a problem with our websites.  We have been using Hostgator as a host for two wordpress websites for the last few years.  We are not really happy with them, but have kept them because it is a big job to switch at this point.

We got a call today saying that one of our sites got hacked and the want $100 a month for each site for "insurance."  (Good firewalls, etc.)

What do you guys think about this?  Is this necessary?  That's a lot of money.

Is there a cheaper, effective way to create this "insurance"?

posted 3 years ago
What kind of website is this? How often do you change things on it?

One way of "insurance" would be to run the wordpress "website" on a local computer and only upload the generated pages to a public server.
Zella White
Posts: 2
posted 3 years ago
I've read stories of this happening with HG.  I used HG for several years until just last week or so.  I switched to Leaver & Co. and they migrated everything for free same day, the only difference I noticed after migration was that my website was faster.

As for the hacking, it seems as though I've read somewhere that those might not be genuine hacks, just an attempt to get more money.  HG is, in my opinion (and experience with their affiliate program), a pretty shady company.
Daron Williams
gardener

posted 3 years ago
I'm going to be launching my own homesteading blog later this year and I think inmotionhosting looks like a good hosting company. Based on reviews they seem like a decent low cost option. My wife did a lot of research looking into hosting companies for her business and decided to go with inmotionhosting.

I run a web design company and have been building and hosting websites for hundreds of clients for 20 years. During that time, small business websites have evolved from static sites with only a few files to dynamic sites like Wordpress with a ton of files, permissions, databases, and potential hacking targets.

Improving security for our clients does have increased costs in both 3rd party services and labor:


So when you say 'insurance,' there are many potential things that could cover. $100/mo. is a bit high in my experience, however. Necessary? No. Smart? In some form, yes. Way too many sites are hacked these days to not have some form of backup plan. But the right plan varies based on your risk tolerance and the cost of hacking, be it downtime, reputation, or loss of search engine rankings.

Where to host? Not a simple answer, even in my position. You can get hosting for $5/mo. You can pay $500/mo. You can get managed Wordpress hosting as a minor form of insurance or use a WordPress-only hosting platform such as WPEngine which will have more integrated services. You can monitor sites with free services like Google Webmaster Tools or go way beyond that.

Angelika Maier
pollinator
Posts: 1432
Location: cool climate, Blue Mountains, Australia
22
posted 3 years ago
My gut instinct tells me that the company claiming that your website was hacked and wants to earn money with you ... sounds fishy?? Maybe they hacked it in the first place?
I don't know I am by no means and expert.
I read this with astonishment. I run a website with shopify (but my hosting is still with weebly) and I am unsure weather and how I can make a backup on a more or less regular base.
I need a no cost method and would like to save all the texts and especially the plant (product) descriptions with the pictures.
I neve thought on hacking so far.

posted 3 years ago
I've been hosting my own webserver, email server, etc. for a couple decades now.

I already pay for internet access, another $8 a year to register a domain, and a few bucks every 5 years or so to buy a new server.  This is my latest one: 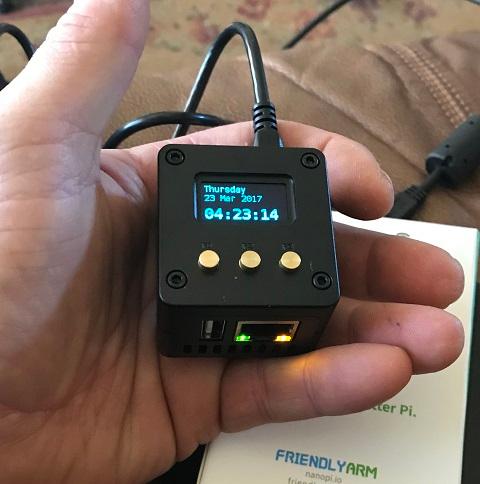 Cost a whole $30 plus shipping.

Security is my own problem, but that's not so hard.
Plus I'm a small target (security by obscurity) so nobody but bots and the occasional script kiddy bothers to try hacking my servers.

Sophia Green
Posts: 2
Location: United States
posted 3 years ago
Thanks for the feedback you guys.

Sebastian, not familiar with this but I will look into it!

Daron, thanks for the recommendation.  Will definitely look into this.

Jeff, this all sounds very interesting.  Will look into the things you mentioned.

Angelica,  I agree.  It felt fishy from the moment they contacted us and told us we got hacked.  So glad we are looking into other options and learning more about this.

Peter, I like this!  Will definitely look into it.  I think I know a gal down the road who is her own server too.  I'll ask her and do some other research.


Angelika Maier
pollinator
Posts: 1432
Location: cool climate, Blue Mountains, Australia
22
posted 3 years ago
Now I have to ask really dtupidly: what does the server do? Is it a backup for your stuff? It looks neat and small.

Angelika Maier wrote:Now I have to ask really dtupidly: what does the server do? Is it a backup for your stuff? It looks neat and small.

It's my webserver, when people go to my website they are actually connecting to the computer shown above.  It's also my email server, handles all my incoming and outgoing email.  I also run a webmail service on it, like Gmail, etc. so I can access my email from anywhere that has the internet available.

I don't use Wordpress, but it is certainly capable of running it.

It also functions as my Domain Name Server(DNS), both authoritative and resolving/caching.  However, most people have no clue what a DNS is even though most people use them daily.

Modern computers are amazing.  This little thing in my hand would have been science fiction back when I first learned about computers, it is more powerful than a Super Computer from the 80s.  It is faster, has more memory, and more storage space, than a top of the line desktop computer from the 1990s.