I had a beneficial visitor!

Leah Sattler
Posts: 2603
51
posted 12 years ago
I am always pleased to find a snake! I know they give many people the creeps but  I would ask that if you haven't already please try to coerce your fear into becoming respect for these incredible creatures and to at the very least refrain from killing them when found. after the pic are some reasons why...

For every non-venomous snake you kill you are making room for another potentially venoumous snake to move in.

Snakes are the ultimate rodent control tool, their lithe and dexterity allow them to hunt rodents where they live unlike halks and cats.

http://www.ces.ncsu.edu/gaston/Pests/reptiles/venompix.htm
with a little observing venomous snakes can pretty easily be distinguished from non venomous. In North america *all venomous snakes have cat like eyes, non venomous have round pupils. venoumous snakes have head that are distinguished by their triangular shape and distinction from the body. Unlike non-venomous snakes whose heads more or less blend smoothly with the body. *the only exception to these rules is the coral snake. But it is easily distinguished by its loud red/black/yellow coloration and is the only one that might be confused with a non-venomous snake, the king (edit) snake. Thankfully coral snakes are found in only the southermost portions of North America and due to the configuration of their teeth are unlikely to even be able to deliver a venomous bite on a human. the famous poem to help distinguish a coral snake from a king snake goes as follows.

This refers to which color meets which in the pattern displayed onthe snake in question.

Charley Hoke
Posts: 66
Location: Blue Ridge Mountains
posted 12 years ago
Great post Leah, and what a beautiful snake. I am always pleased to hear someone who has an appreciation for these wonderful creatures.

It's ironic because I have been writing a piece on the benefits of all snakes and my experiences with them since I was a boy way back in the 60's. I grew up surrounded by dairy farms and the farmers would pay me for all the black snakes I would catch and release in their barns. Like you say they are an excellent form of rodent control.

My grandmother used to say, "A black snake under your front porch is worth a thousand dollars."

Snakes will also eat insects like grasshoppers, beetles and grub worms, basically anything they can catch and swallow.

There are many misconceptions about snakes and one is that they will attack humans, this is just not true, at least of north American snakes. Reality is snakes, like most wild animals fear us more than we fear them.

Snakes bite for one of only two reasons, food and defense. Since they cannot eat a human they will only bite us in defense. Most human snake bites occur either because someone is handling them, they were stepped on, or they are backed into a corner and have no retreat. A snake, again like most wild animals use flight or retreat as a first line of defense.

Venomous snakes will often stand their ground when encountered hoping you will pass and leave them be. I once encountered a copper head who coiled as if to say this is my spot go away, however, when I gently prodded him with a stick he retreated under a rock and let me pass.

We have many water snakes on our place because of the creek. To observe them I have to sneak up on them because they will head for the water at the first sight of me. Once I came up on one unawares and startled him so badly that he jumped about two feet and into the creek.

I have a spiritual connection with snakes and will stop whatever I am doing when I see one, and will halt traffic to allow one to get out of the road, often getting verbal abuse and one finger salutes.

This refers to which color meets which in the pattern displayed onthe snake in question.

I will add that this poem is to help distinguish the coral snake from the scarlet king snake which is non-venomous but at first glance looks just like a coral snake.

Sorry to be so long winded but as you can tell I am passionate about snakes, oh and I like spiders too.

The pic is a friend I met last summer and is a variety of water snake. 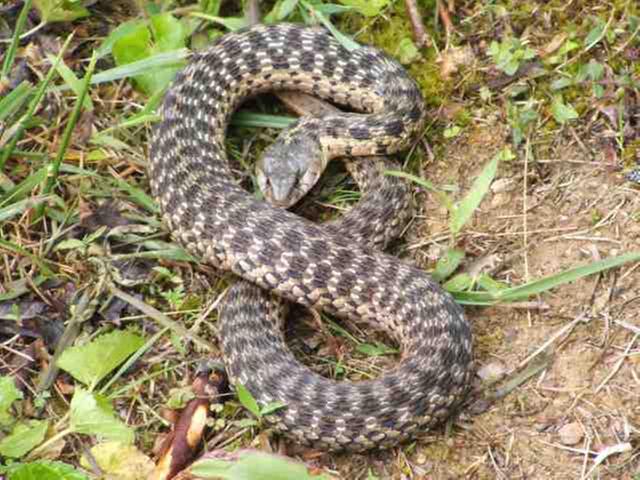 Charley Hoke
Posts: 66
Location: Blue Ridge Mountains
posted 12 years ago
I found this site which has pretty good pictures of the Coral, and Scarlet King Snake

http://www.pestproducts.com/coral_snakes.htm
Leah Sattler
Posts: 2603
51
posted 12 years ago
thanks for the correction I see now I put milk snake instead of kings snake in my post I will go back and edit.  I'm glad to know I'm not the only one who endures the honking and hollering when allowing safe passage for a snake on the road. I get strange looks when I turn my flashers on and run out of my truck and grab a snake by the tail and pull it off the road! My poor hubby waits in the car trying to hide his identity. we've had these guys...... or shall I say guy and gal visit too. I couldn't figure out what they were and finally emailed pics to an expert. If I remember correctly he told me they were yellow belly racers. I thought they were gorgeous. edited to add. the first pic shows the round pupil clearly that is characteristic of most non-venomous snakes.
although I know most people aren't interested in getting close enough to see the difference!

Susan Monroe
Posts: 1093
Location: Western WA
7
posted 12 years ago
A friend here in western WA had an explosion in her garden snake population one year, and she was certain it wasn't coincidence that she also had the least insect damage ever in her vegetable garden.

"Red next to black
Is a friend to Jack.
Red next to yellow
Can kill a fellow".