Posts: 50
1
posted 11 years ago
I've been experimenting with what I call "stabilized cob" I met to start a tread about my findings for some time, but wanted the structures to go through their first winter.

Stabilized cob is just cob with a small amount of portland. 5-10%. What I was trying to achieve is to increase the compressive strength and decrease the rate that cob erodes when exposed to water, but still retain it's breathability and thus keep the maintenance down. I was hoping that a small amount of portland would achieve this. Also I did not apply any plaster of sealer in these experiments. Here are the two projects. First a cob oven-the stone base was mortared with stabilized cob also and the large Moai(Easter Island head)- over 8ft tall.
I will explain the process in the next post
coboven4b.jpg 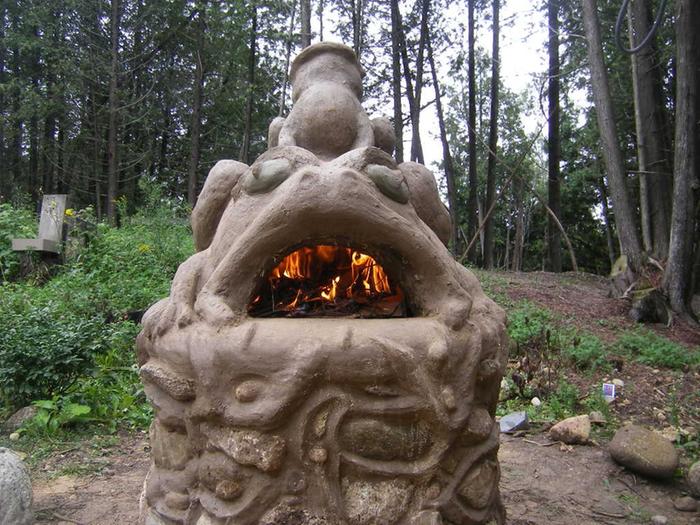 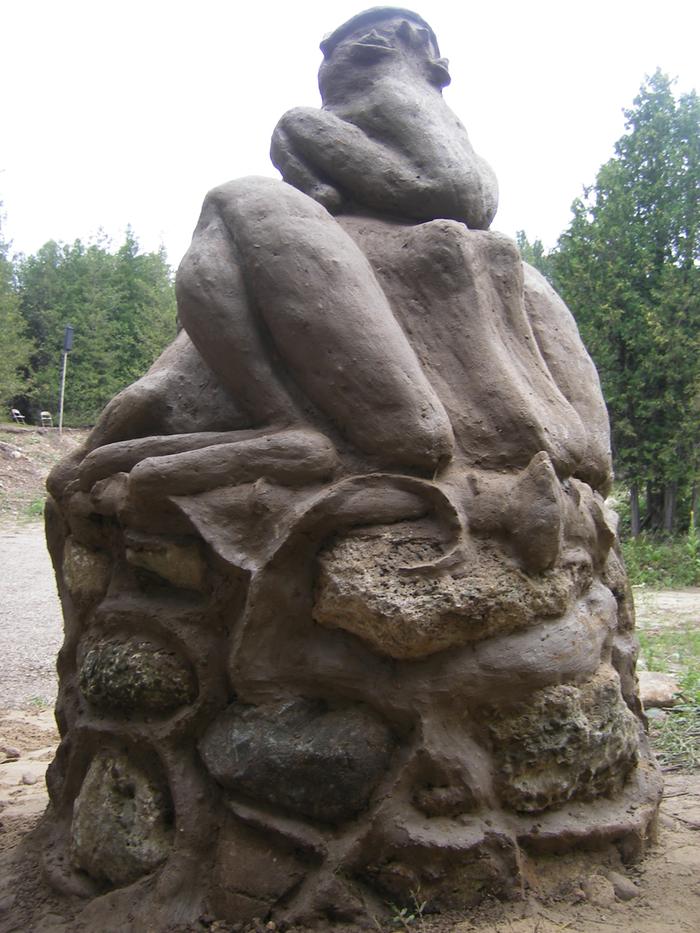 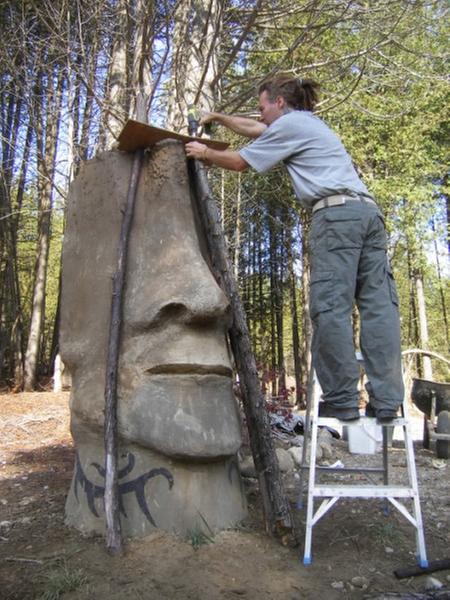 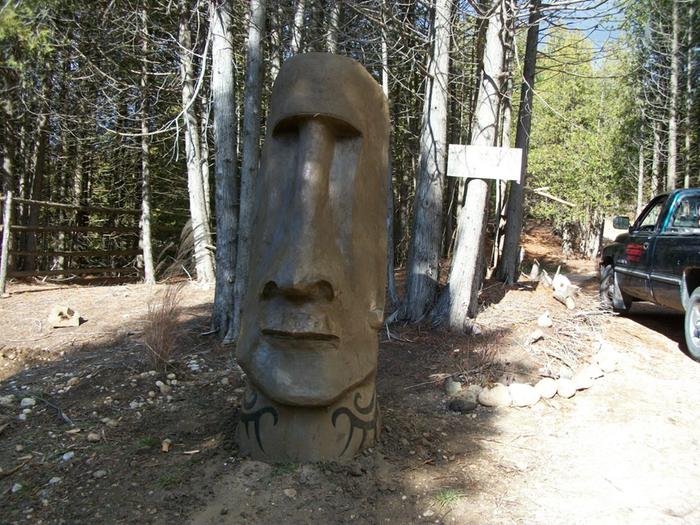 Mark Larson
Posts: 53
Location: Conroe, Tx
posted 11 years ago
Wow great job on those. They look fantastic. I've been wondering myself about cement stabilized cob. Glad to see someone gave it a shot.
Posts: 50
1
posted 11 years ago
So, I have lots of clay on my property. Infact the mix of clay and soil is such that all I have to do is pick up some earth and had straw. I decided to mix the cob and portland in wheelbarrow and it makes it easier to transport to the build and it's what I'm use too, being a mason for 22 years. SOOOO hard! Due to clay being so sticky, I would say cob is a easy 10 times harder to mix that concrete. This also made it harder to mix in the portland. This spring I will buy a cement mixer and try it.
So with lots of hard labour the oven and Moai where built.I think the portland helped the cob dry quicker. fast forward 4 months, I was very please how they were holding up. Absolutely no water damage/erosion. My test of just cob would erode to nothing in no time, so I no the portland was doing the job of stabilizing the cob. Winter was coming and I decided to chance it and not seal or cover them to see how they hold up. I went up in january and saw a small amount or flaking/scaling from the oven and mavins neck. This worried me a little, but decide to leave it unprotected till spring. My heart completely sank when I saw them, they lost a good inch or more.
A big fail! Not only did it erode but what was left was very wet and soft. I covered them to try and stop the damage. I will post pics when I take them

I plan to repair them with a lime mortar-a material I know well and should protect the cob. Before winter I may give them a coat of linseed oil for extra protection. The portland did make the cob stronger and prevent erosion. Since it was flaking and no eroding over the winter I'm thinking it was because of freeze/thaw, the portland may have even trapped more water inside, But I could tell the cob was still very breathable. If they where sealed, I think they would have survived with little to no damage. And if protected by a roof, stabilized cob may have many benefits. For example, getting code approval may be easier if they see it has portland and has higher compressive strength. Increase the portland a little more and we could call it "earthen concrete". Who knows, the building inspectors may even think it's real concrete.

posted 11 years ago
Wonderful information, thank you so much for sharing your projects.

You didn't mention, but I assume that the bit of portland added to the mix in contact with the ground prevented problems with the foundations - yes?  I always picture having to use proper cement for foundations, but maybe that isn't so.... what do you think?
Posts: 50
1
posted 11 years ago

Jami McBride wrote:
Wonderful information, thank you so much for sharing your projects.

You didn't mention, but I assume that the bit of portland added to the mix in contact with the ground prevented problems with the foundations - yes?  I always picture having to use proper cement for foundations, but maybe that isn't so.... what do you think?

Hi Jami, Theres a little portland in everything. The foundation is much closer to a concrete mix 3-1, but I used the local earth instead of buying sand and gravel. For the foundations I dug a hole, put in the earthen concrete and threw in many large rocks, this greatly reduced the amount of concrete.
Jami McBride
gardener

posted 11 years ago
Great - thanks for explaining!
Kirk Mobert
pollinator
Posts: 172
Location: Point Arena, Ca
43
2
posted 11 years ago
Castlerock,
I'm a natural builder, been working with cob and other materials for around 13 years or so..
I've found so far that (as a general rule) portland and cob don't play well together. I've not yet had good results mixing the two or putting them in contact with each other. I've heard from others that dirt-crete can be made to work well, it's NOT been my experience thus far.
Seems to me that concrete is just to hydrophilic, it wants to wick and hold onto moisture and that ain't what cob needs. Anymore, the ONLY place I'll accept concrete (in my buildings) is at the foundation level, even there I get a bit nervous.

Not too long ago, I did a tour of all the old California missions that I could get to. I found that EVERYWHERE they used concrete, portland or stucco to repair or "protect" these old buildings there was a failure of some kind. In fact, it seems to be THE major failure points of these old buildings. It's a shame really, folks have worked hard to keep these historical sites together, doing their best with what they thought would do the job. Now, it seems, the best way to save 'em is to undo all the hard work done to save 'em in the first place. If the stucco is NOT removed from the old adobe missions, their days are numbered.

The British cob builders, in the north of England (where it rains and sleets sideways for a major chunk of the year), have a saying: "With a good hat and a good pair of boots, cob will experience a loss of face at about an inch a century."

posted 11 years ago
So Donkey this makes me wonder about where the boots meet the cob - since cement wicks and all, isn't it a problem to use as boots?  How can this be helped?
Posts: 50
1
posted 11 years ago
I suspect the foundations of the English cob houses where build with lime based mortars, not portland based cements
Kirk Mobert
pollinator
Posts: 172
Location: Point Arena, Ca
43
2
posted 11 years ago
Where the cob meets an "urbanite" (old, broken sidewalk), there can occasionally be condensation issues where conditions are just so. It's not something that I worry about a lot. I DON'T use stuccos, nor mix portland in, don't make large vertical concrete columns in the cob, etc.  As far as it goes, the foundation level (and ONLY there) is the least objectionable of them all.
Some Natural Builders put vapor barriers between concrete foundation and cob, I think it causes more problems than it solves. Cob is pretty good at breathing vapor away, you don't want to push it but to some degree, you can rely on it.

In the British isles, they used lime mortared or dry-stacked stone as foundation, in traditional southwestern Americas dry stacked stone or directly on the ground. In Africa and the Middle East you most often see cob or adobe directly on the ground, but not always. Same, same for the Far East. It's all very contextual. If you get a lot of rain you should have nice knee high foundations and wide roof eves, if you live in a dry climate you can place cob right on the ground AND use it on the roof too..

I personally NEVER try to stabilize cob or adobe with anything, I really don't think it needs it.. If for some reason you need to do it (building department or whatnot) then I'd try bitumen rather than portland. That's what is done in New Mexico at least, they have some experience with it and at this point, know what to expect.

Posts: 1
posted 11 years ago
In the next days we're going to start building our first cob house. We've read a lot as well as watched a lot of videos about cob.

Thanks Castlerock for showing and letting us know about your experiences as we were planing on adding portland in the mix too.

We live in Quebec (Canada) and we have harsh winters with a lot of snow up here. What would you all suggest on adding on the exterior walls?

Posts: 50
1
posted 11 years ago
Hi Mishka, when I build my next one I may not use any portland, use a lot more straw and make the walls thicker. My 4-6" walls would form small cracks when I had a long hot fire-like 4+ hours long.. The extra straw and thicker walls should help that. I may apply a lime whitewash and seal with linseed or tung oil. I'm not sure if I will leave exposed for another winter to see what happens or just tarp it to keep it dry. In your heavy freeze/thaw cycle location like Quebec, it may be best to just protect it over winter