roots and their importance to plants and the soil

rose macaskie
Posts: 2134
9
posted 10 years ago
In joseph A Cocannouer book weds guardians of the soil he talks of the deep diving his expression roots of weeds opening up the soil in such a way as the weedied roots of crops can accompany them down into harder mayb e and lower levels of soil,
of deep diving roots onditioning the soil at depths crops don't reach by leaving vegetable matter when they die of in lower levels of soil. the vegetable matter agives the sil better tilth a better consistency for the roots of plants and rotting vegetable matter heats the soil a bit.

I can never write a title without including a spelling mistake.

Photos
In the first photo you an see the cracks opened up in the rock by the roots of the smallish evergreen oaks on top of the rock in this photo you an see the earth in the cracks, and in the second photo you an see a bigger portion of rock face that proves that there are not vertical crack in parts of the rock face  that lack a tree.
In the third photo you can see some fine tree roots coming out in the patch of rock face where there is a triangular gravely patch on a bit of the drop that slants a bit less verticallly and looks gravely, just above the gravel heap and in the centre of the foto. agri rose macaskie.
roots-1.jpg 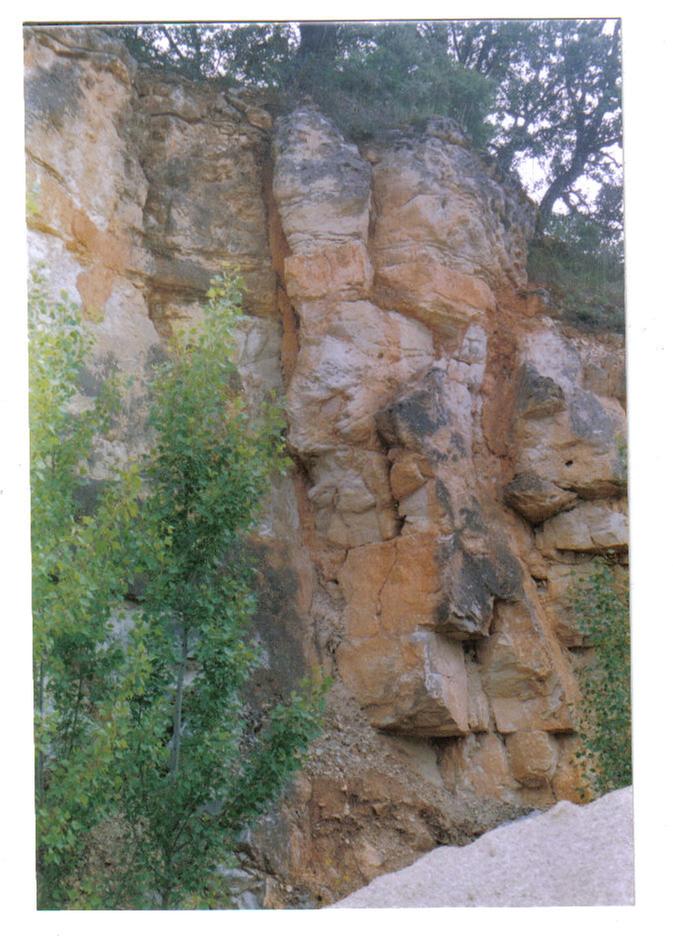 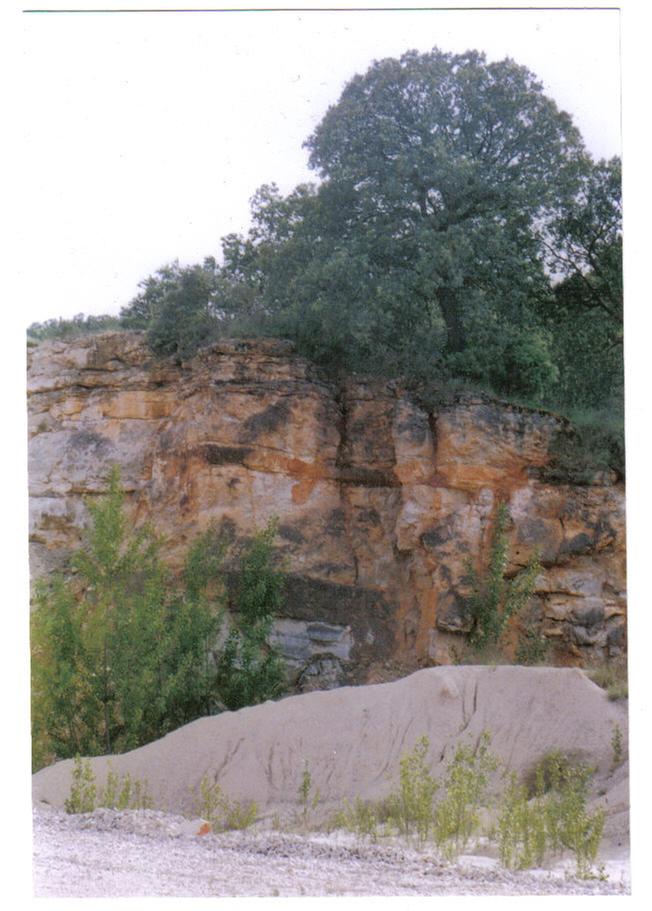 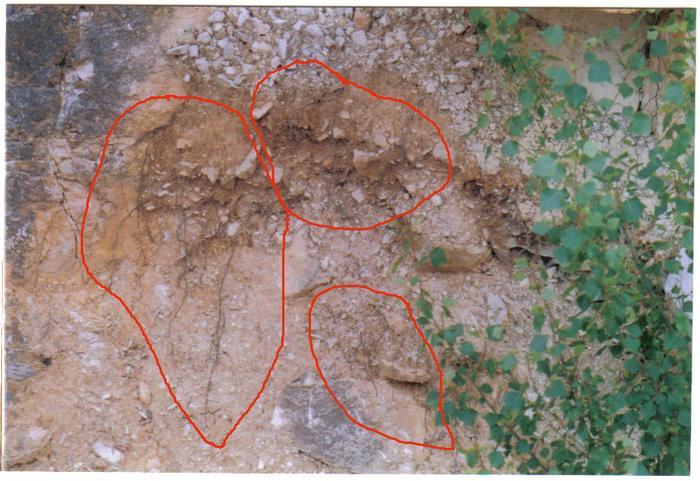 rose macaskie
Posts: 2134
9
posted 10 years ago
Here is another photo in another bit of the quarry. The roots are a bit easier to see in this photo. i need a better camera to take photos like this. The trouble is the whole rock face looks rumbly here.

The seond photo is of another tree, you an see how the root plates the horizontal roots that run just under the ground have been cut through at the top of the slope.
i have blown up a detail of th efirst photo,
roots-4-copia.jpg 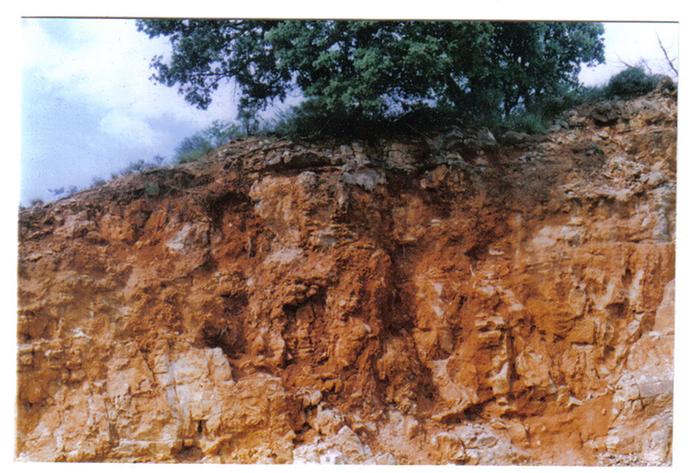 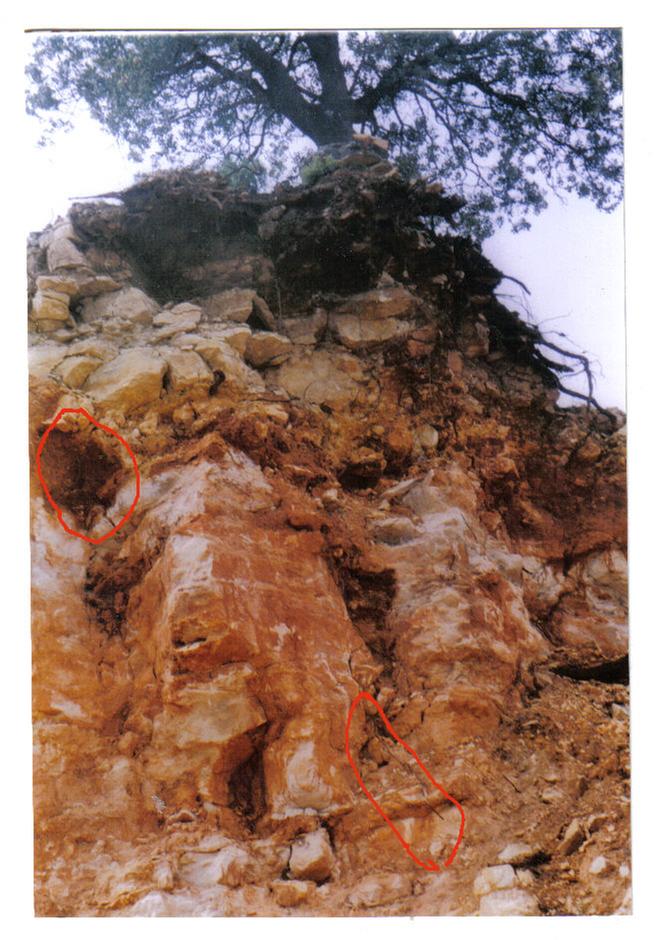 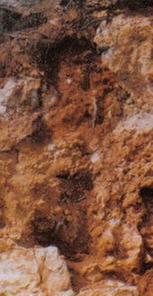 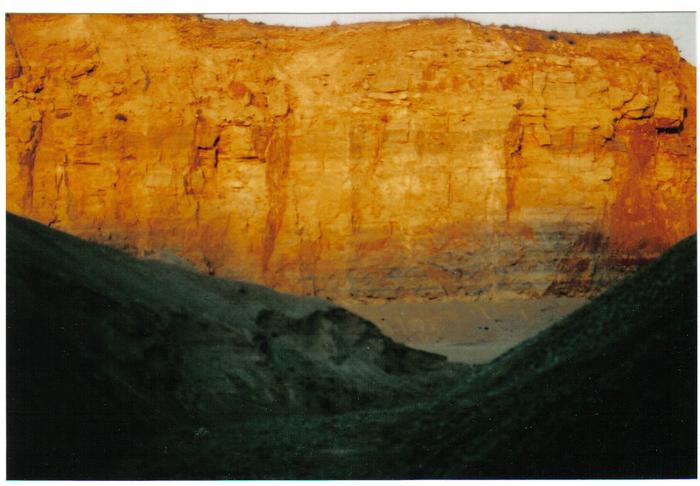 rose macaskie
Posts: 2134
9
posted 10 years ago
if the roots in the quarry aree vertical roots except taht in one photo you an see the circle of cut off horivaontal roots here is a foto of horizontal roots.
THese are the roots of  a mediteranean maple, arce de montpellier. THe trees in this  peie of wood were before coppiced . ut down frequntly and regrew from the roots or kept as hedges.

I have hung many of the photos of this thread iin other threads but it seems to me a good idea to have a thread with photos of roots and only roots in it. agri rose macaskie. 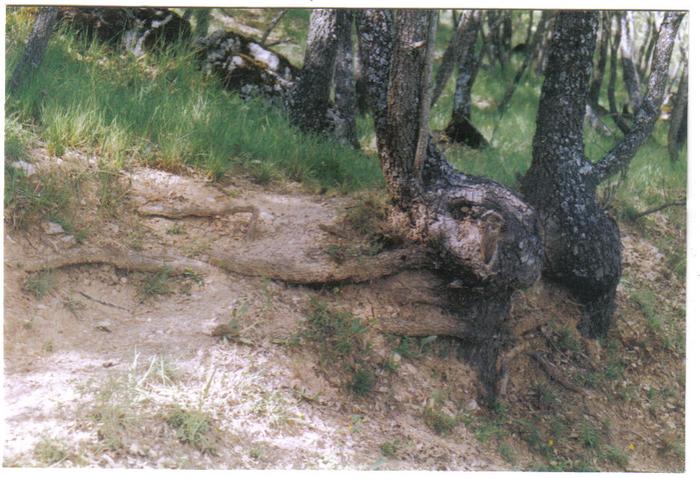 rose macaskie
Posts: 2134
9
posted 10 years ago
the other picture i have of horizontal roots is of those of a juniper and they seem to spread out equidistant from each other.
you can see them in the tread marks of a car the weight of the tires has displaed the mud revealing the roots a bit below the ground.

It is important to be very counsiouse of the superficial roots of trees and bushes disturbing them could weaken the tree.

The famouse writer, Heidi Guildmeister on how to grow plants in a mediteranean garden, that is plants suited to a place with a dry season like Califormnia, says that in fact trees in such places have a lot of superficial roots capable of picking up the water of a summer rainstorm that does not penetrate the ground far and maybe of picking up dew.  agri rose macaskie.
427.JPG 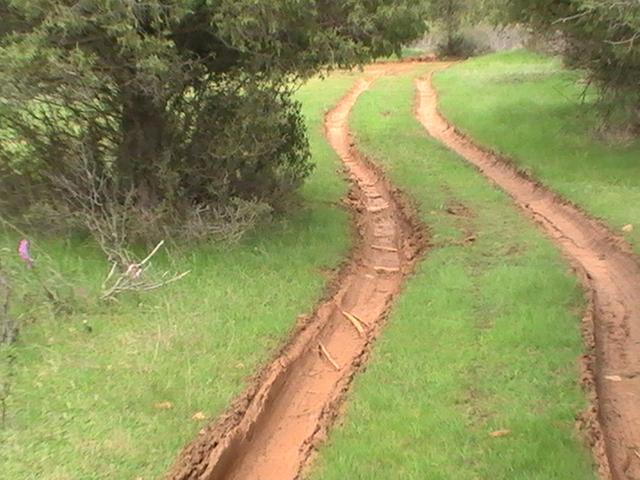 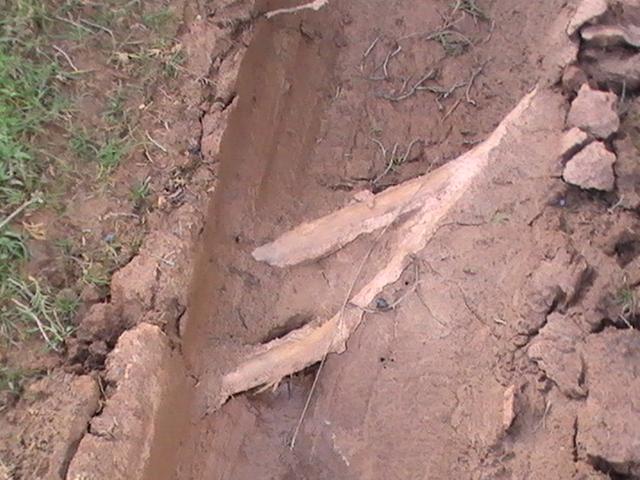 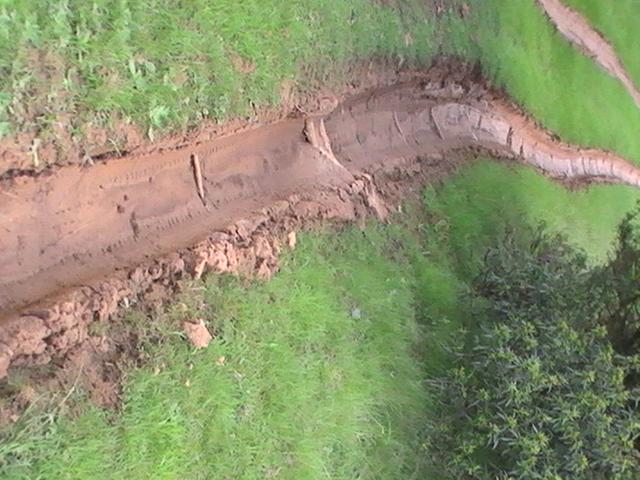 rose macaskie
Posts: 2134
9
posted 10 years ago
I have a photo or two of the horizontal  roots of an evergreen oak that al appear at the same depth in a piece of chalk. This is a place where lorries or some such seem to occasionally drive around in th wood ther is a dump very near, and the quarry, disturbing the soil and even dumping a lot of tar, so that an island aof chalk round this tree got left exposed above the surrounding ground.
n  i have a foto of the whole line of the crack superficial roots come out of and two more detailed photos of the same. agri rose macaskie.
raices-chalk-encina.jpg 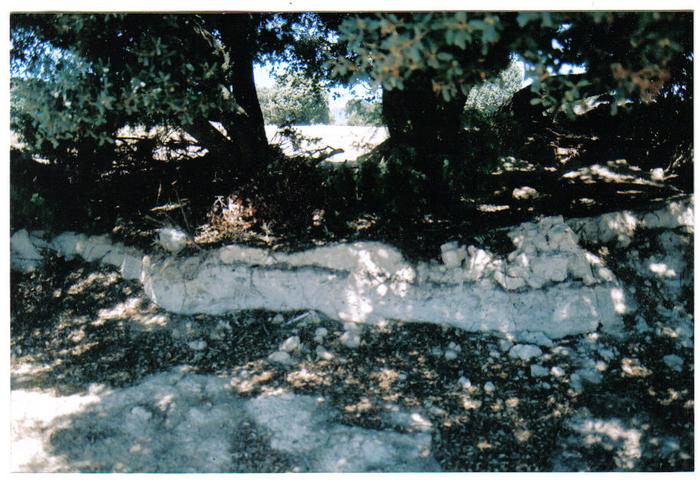 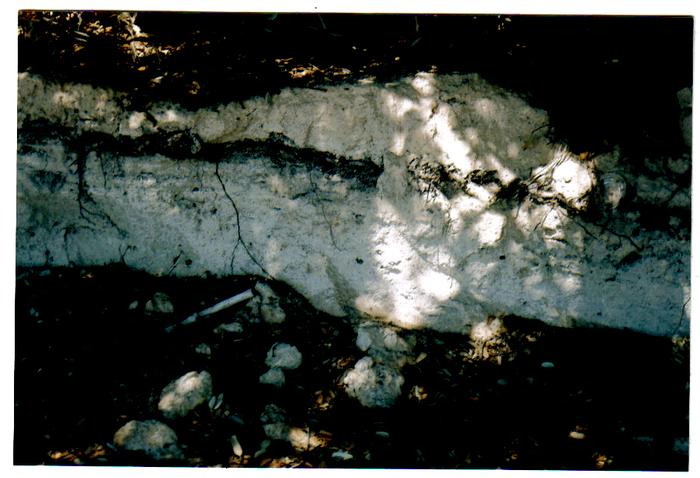 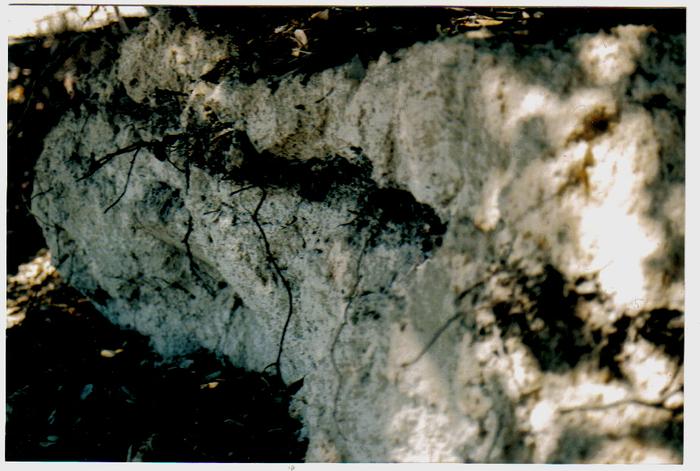 rose macaskie
Posts: 2134
9
posted 10 years ago
This is a photo of the roots of time, in this village Tamajon time grows every where and here a small wall by the side of the road has fallen away revealing the roots of the time bushes.
Time is a plant that provides green leaves for the live stock, sheep and goats in summer when the grass has died down, maybe its deep roots are one reason that it stays green in the summer drought.

the second photo is a photo of a bit of grounds covered in time bushes so as to give an idea of how many time bushes grow in some parts of spain. The bushes look like bumps on the ground. I have circled the area full of time bushes in yellow. As they are pretty heavily cropped they stay smallish on the whole,
another photo of land covered in time bushes the bushes are the bummps on the ground. time with their deep roots aand so leaves in summer are a forage plant in this area of sheep and goat farming. agri rose macaskie. 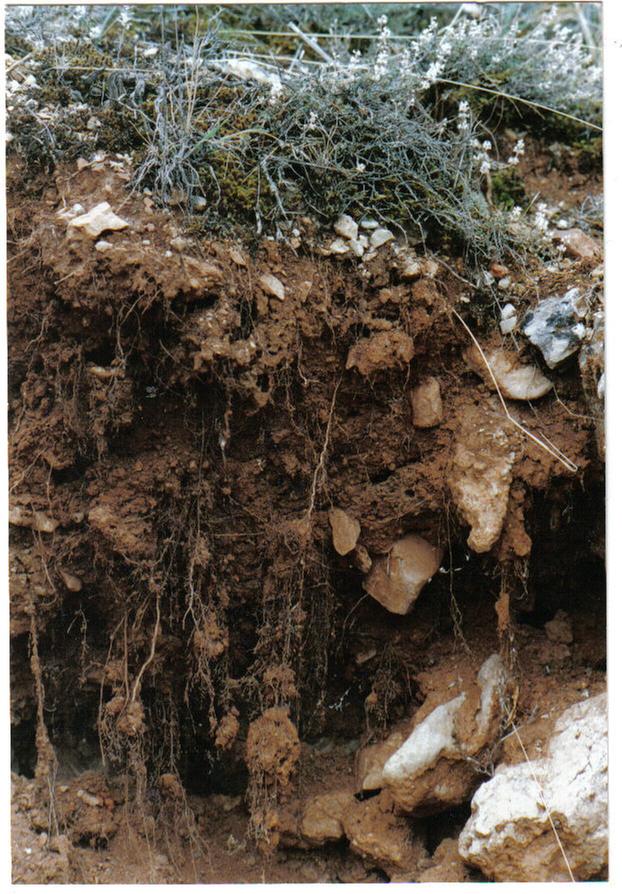 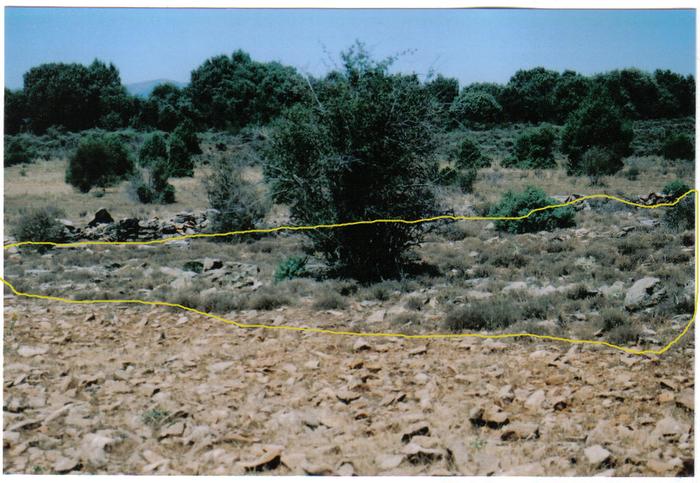 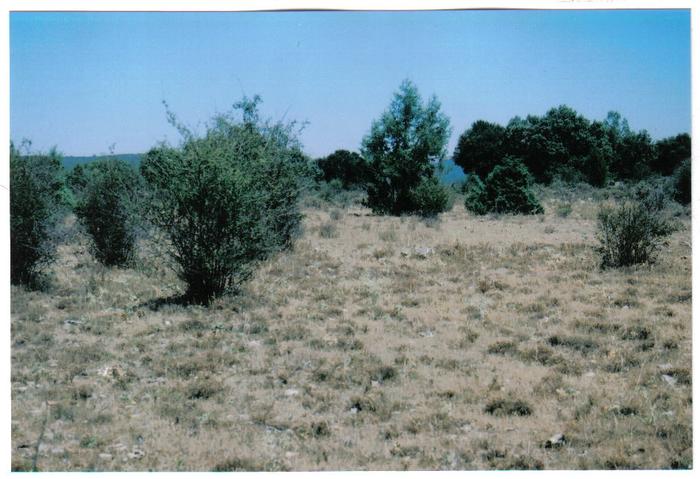 rose macaskie
Posts: 2134
9
posted 10 years ago
Thanks maikeru.
This is a photo of some grass roots . I had a bank of soil that i decided to move and i cut into it in october or november when the grass had only been growing for a short amount of time. The grass in my garden dries in summer and regrows with the autumn rains so these impresive roots had grown in a  mounth or so. It just shows you how good plants are for your soil, how much organic matter they leave in it, these roots will die in the next summer drought and they will maybe die down a bit in winter and revive in spring. so by dying down leaving a lot of dead root in the soil. agri rose macaskie.
raices-hierba.jpg 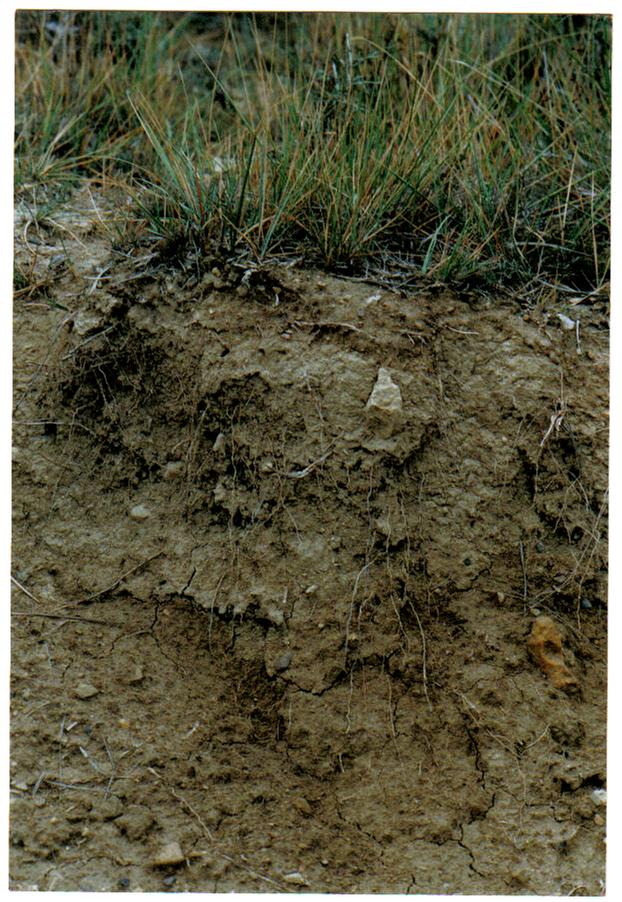 rose macaskie
Posts: 2134
9
posted 10 years ago
this is a clover root that got exposed when we were leveling a bit of garden.
i have been looking up clover and alpha alpha and this is provbably an alpha alpha root its leaf was like clover but i have found out tha thte plants i thought were clover all of them were some of them alpha alpha.
This second photo is another picture of roots in a peice of earth that has been bared for building or making a paht way, the roots are mostly alpha alpha ones and they reach far down into the soil two metres and more.
The third photo is of the nodules that contain bacteria that turn the nitrogen molecule into molecules that plants can absorb.  The nodules are the small white roundish things on the roots.
I have included a photo of the flower and leaf of this plant that i thought was clover and is in fact alpha alpha. agri rose macaskie. 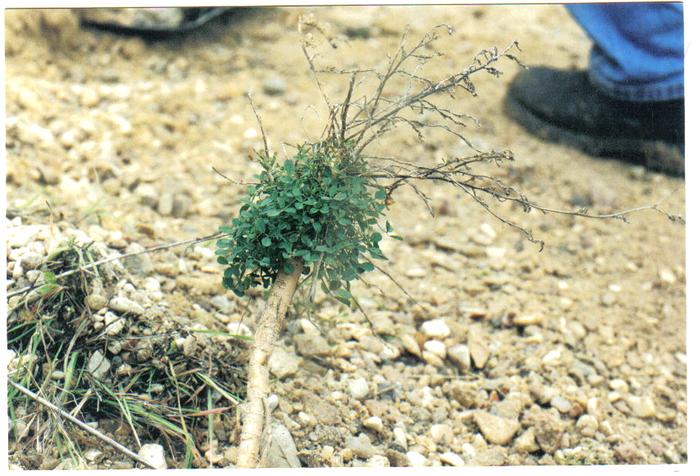 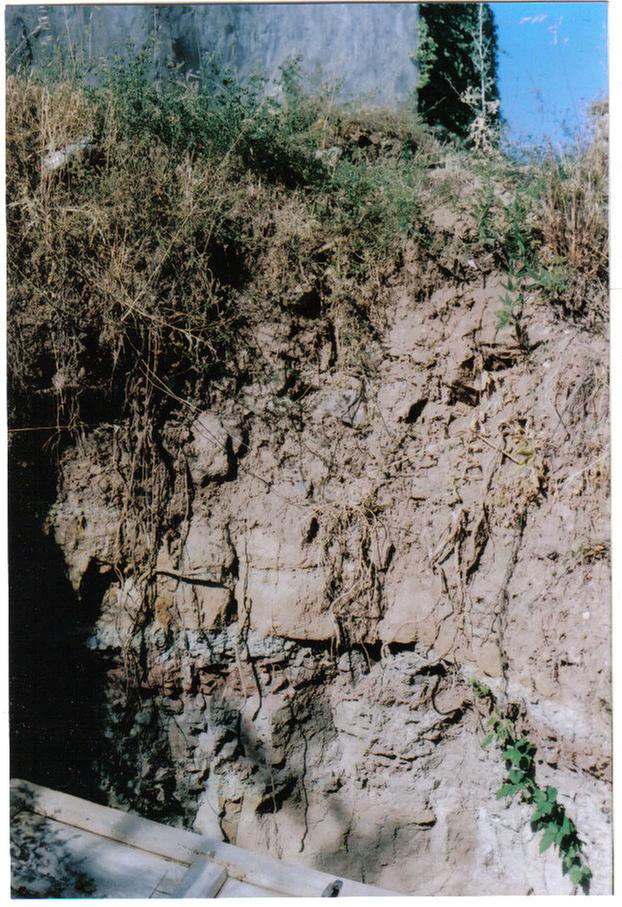 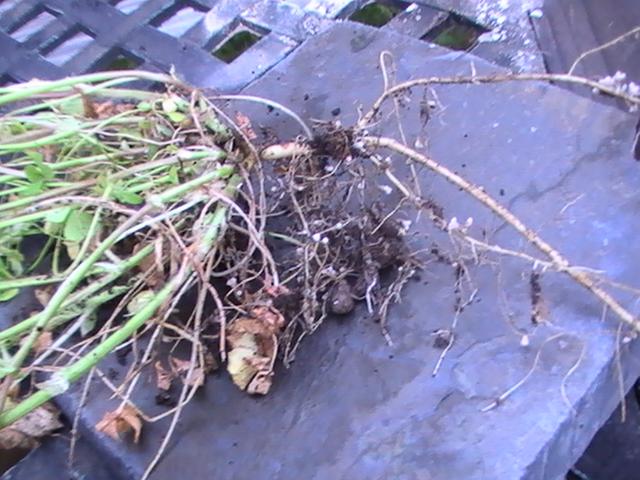 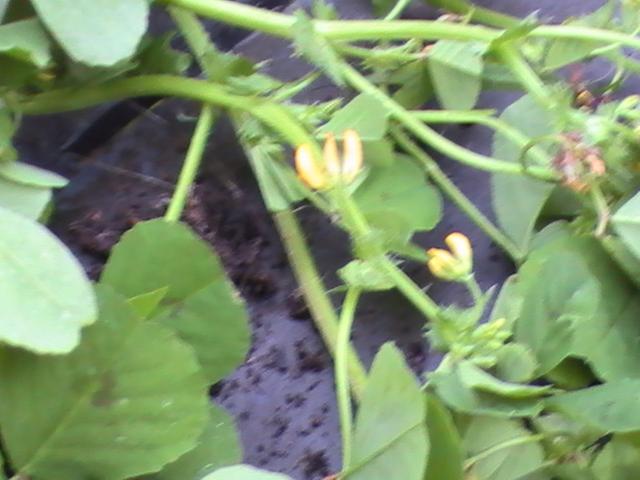 rose macaskie
Posts: 2134
9
posted 10 years ago
Joseph Cocannouer on roots.
He talks of the value of weed roots but what he say is valid for other types of roots.

Joseph cocannouer say that the roots of many weeds go down deeper than those of crop plants. He reasons that we have got crop plants used to being watered, so they have stopped trying to find water at a any depth.
How th eroots of weeds help crops.

He says that deep rooted weeds have superficial feed roots which in his opinion they stop using much once they have sent deep foraging feeder roots into the soil. There are nutrients in deeper levels of the soil those that get washed out of the top layers by rain water.
That is he thinks weeds they dont much compete with crops for nutrients in the more superficial layers of the soil.

3.      Of course deep roots as i said above bring up the nutrients the rain has washed down into the soil. When the plant dies the nutrients that have been deposited in the weeds leaves and stems calcium, iron, nitrogen, etc., return to the surface of trhe soil.  agri rose macaskie.

rose macaskie
Posts: 2134
9
posted 10 years ago
The roots of trees and many bushes maybe of other plants also do somtehing called hydraulic redistribution.

I was taught or imagined that all roots took up water from the ground and carried it to leaves however-:
Scientists  have put measuring instruments, called the bean heat system, if i remember right, on roots, that measure the direction of the flow of water and nutrients and found that -:

For one, if superficial roots are losing water to the ground rather than picking it up, some thing i also did not know could happen, i thinks its called negative flow, then the water being taken up from deep within the soil gets taken to the tips of the superficial roots as well as to leaves, the deep roots feeding the shallow ones.
So were there is a tree or bush in hot weather the ground may be damper than where there are not trees and bushes favouring other plants that grow around them.
This means the flow in superficial roots reverses and instead of flowing from the roots to the leaves water flows from the mmmain root the vcentre of the tree out to the tips of the roots.

Two, The scientist also discovered, that in a summer shower of rain the superficial roots start to take up water again but some of this water gets taken not just to the leaves but down into the depths of the earth down the tap and sinker roots and is stored in the earth.
The flow in tap and sinker roots stops being upwards toward the leaves and becomes downward. Pretty way out what!
This rather changed my idea of the function of roots and there inmportance to the plants around them.
This  trememdously backs up the idea that it is useful to have trees and bushes close to other plants. agri rose macaskie.

rose macaskie
Posts: 2134
9
posted 10 years ago
this is a phot of the blue apha alph tha ti thought was clver because i thas three leavs like clover and because i a¡m not a botanist and only know some plants.
I tis the plant whose roots are shown in th ebit of ground cut away by a neibors building activities. the meesy pho9to of a great cut in some clayed ¡y soil tha treveals roots going down some ¡depth if you think hta t tha is a verbiscum a very tall plant that you can see on the top this is a pretty big cut in the earth.
this photo of alpha alpha also shows how pretty weeds are though this is i think in a bi trof natural patastuer land were alpha alpha is not a weed buut an important bit of fodder.
blue-clover.jpg 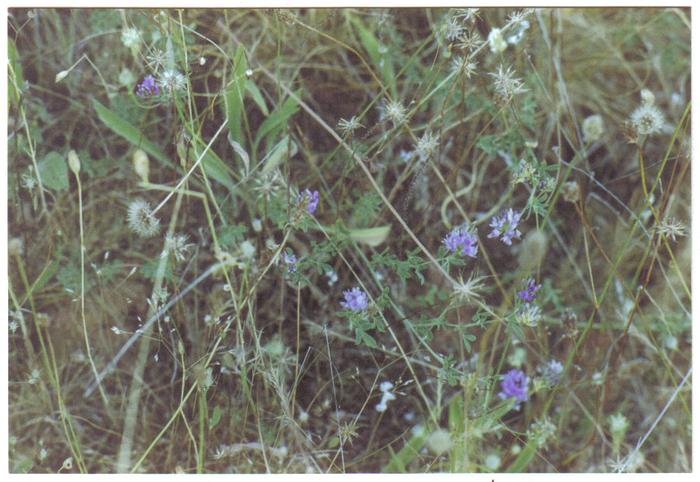