Emily Jacques
Posts: 30
posted 9 years ago
In Bill Mollison's book Introduction to Permaculture, he has a formula for an "instant garden" (layering straw, compost, leaves, etc.)

He says that if you build a garden like this, you don't need to worry about rotating crops.

we use same method plant straight away, don't rotate, but me thinks the not rotating for us is we feed the medium all rottable household scraps, including spent vege plants all tucked under the mulch neve dug in, we cultivate our vermicultue in our gardens composting worms along with garden worms.

With peace and brightest of blessings,

"Be Content With What You Have And
May You Find Serenity and Tranquillity In
A World That You May Not Understand."

Emily Jacques
Posts: 30
posted 9 years ago
Thanks, Len. That's kind of what I was thinking - if you start with so much "good stuff" and keep adding it then diseases/pests become not nearly as big an issue as building beds other ways, or doing the ol' row & hoe.

But I wanted to be sure I was on the right track.

Posts: 122
Location: sub-tropics downunder
posted 9 years ago
we think what we do and others messes with the bugs life cycle. now this year here we are having what i term a normal winter chilly enough to stop the summer bugs, in previous almost decade we have had mild winters so many bugs just kept on prolificating.

With peace and brightest of blessings,

"Be Content With What You Have And
May You Find Serenity and Tranquillity In
A World That You May Not Understand."

Check out this bed I did for a friend a few weeks ago.

Brenda Groth
pollinator
Posts: 4437
Location: North Central Michigan
26
posted 9 years ago
here a huge part of my garden is perennials or self seeders so I don't worry about rotating anything anyway..

George Lee
Posts: 539
Location: Athens, GA/Sunset, SC
1
posted 9 years ago
Here's what the bed I did for the friend looks like now...Just about a month later. 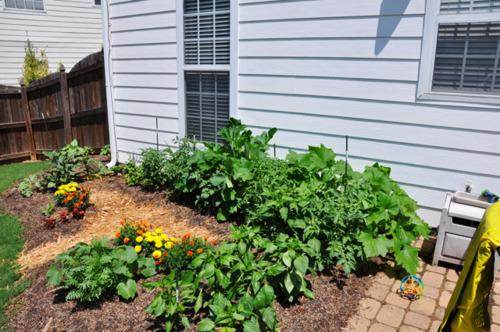 No added fertilizer, nothing, except a little organic pest control here and there. The parasitic wasps seem to be doing quite a good job.

Emily Jacques
Posts: 30
posted 9 years ago
I have several volunteer tomatoes in my instant garden - spaced "too close" together - and they are doing much better than either my potted tomatoes or the ones that I planted against the fence in the clay soil w/ a bit of compost mixed in.

rose macaskie
Posts: 2134
7
posted 9 years ago
it is just that rotting organic matter is what produces nitrogen though rotting stuf also eats nitrogen while it rots and then lets go of it agan when its finished. the bacteria tha trots things take up a lot of nitrogen, howerver livign wind has put on lots o fhorse manure so nitrogen for the bacteria that rot down organic matter and for his plants, his garden came out great.
Organic matter makes the soil texture adequate for plants intit binds soils and in the case of clay binds while it loosens. it absorbes more moisture than many soils and it helps them stay aerated and it keeps soils warmer as the rotting vegetable matter warms the soil. It is also the base material of fulvic and humic acids that help with plant uptake of nutrients which is to say digestion.
Also organic matter on top of the soil prevents the water evaporating out of the soil.it traps the moisture that is coming out of the soil  and i sort of gave up on mulch when my husband went around taking the mulch off the trees i had put it on because he is into alcorques. that is digging a hole round trees that will take water which will soak in swale style.
Alsoi plants seem to feed right off mulches the roots of some of my balcony plants went straight to the corks i put  in the bottom of some pots one day when i did not have enough bits of broken brick to put in the pots for drainage. They do eat amino acids which contain nitrogen as well as straight nitrogen. but still it is not generally said that they get their food straght off organic matter. In Japan i certain type of pines seeds are said to grow best on old stumps of pine trees where there are more nutrients than their are in the ground.
If you put seeds under the cardboard i think they are not likely to come up through it,  so plant the seds above the cardboard. or through holes in it. .
Plus a healthy collection of bacteria in the soil and fungi and fungi produce lots of antibiotics and anti virals, seems to keep plants healthy and you need a lot of organic matter to feed a healthy crew of organic matter digesters. Sir Albert Howard of organic farming proved that his plants and livestock kept healthy when the plants had soil that was as nature meant ift to be teming with microbes, look him up in google.
As Brenda Groth says rotating is partly used so that the illness that do for a potatoe say  dont find more potatoes to eat nexty year in the same spot next years so they cant really settle into any one place because they dont find fiood in that place r next year because you have changed crops in that place different illnesses affect differetn plants so if you grow conr where before you had potatoes then your potatoe eating bugs die of lack of food. . The natural balance of microbes and insects that keeps illnesses in place serves  to fill the place of that function of rotatoin crop farming.
Bill Molison says that you dont  have to explain things just give a simple recipe and it will work but i believe people  have a mind of their own and they will go and experiment for themselves so it is best to tell them the whys and wherefores, you cant just believe they will follow simple recipies. At least let them know what they are playing with when they experiment as far  as you know.
Our mind was made very efficient because things are complicated. If our minds weren't incredible, then we would not survive. A friend of mine says our minds developed in order to try and understand each other . Those who like the simple are likely to mess things up as are we all because we dont kniow everything but art least we are quicker rectifying if we know things are complex and we are better off if we admite the ego reducing fact that our neighbors minds are complex too and they can undersatand the complex. That is a basic of the modern world, give your labourer a education and they become university profesors to imagine they cant handle the complex is  apart from beign  unkind, it means you cut them out from a lot of group activities,  downright old fashioned and classist to imagine they cant understand everything and if we dont  say as much we will role back into the middle ages. agri rose macaskie.
rose macaskie
Posts: 2134
7
posted 9 years ago
Ok living wind i go too far,. i shall try to tone it down a bit. like your garden. I just write and write till i hardly know what i am doing any more. still its not tha tmuch think what a novels like. i suppose it is too much. rose .