posted 2 years ago
So I recently came across an article about the Eucalyptus gunnii tree from the Tasmanian highlands, where it is known as the Cider Gum tree or just as the Cider Tree.  Apparently it has a sweet sap that collects in bark hollows (sometimes with a bit of help from the aboriginal inhabitants of those parts) where it is fermented by natural yeasts into a beverage of about 6% alcoholic strength.  Naturally I thought this would be a tree of interest to permies!  But a quick search shows apparently no discussion here on the forums.  Time for a thread! 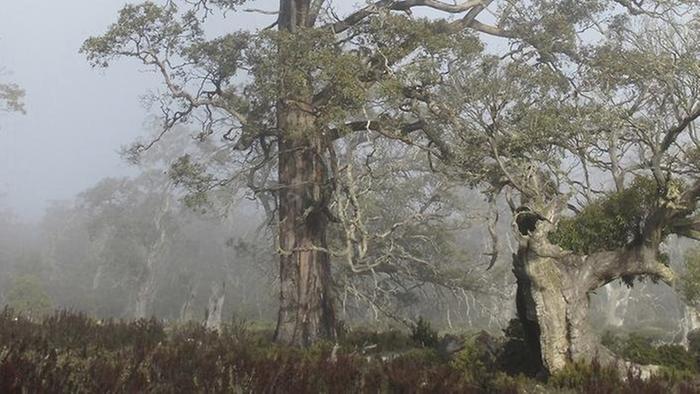 Here's the article: Alcohol brewed from trees and other fermented drinks in Australia’s Indigenous history

When members of the Tasmanian Aboriginal Centre (owners of the Trawtha Makuminya reserve) heard about this project, they kindly invited my research group to examine and sample Eucalyptus gunnii trees on their reserve.

The Eucalyptus gunnii trees originate from the Central Highlands of Tasmania at about 1,000 metres above sea level. Perhaps the easiest material to use from these trees is the sap.

Dotted around frost hollows in poorly drained soils, prone to extreme cold, attack from animals and insect borers – presumably for the sugary bonanza they represent in their environment – the trees appear to cling to existence.

One subspecies (divaricata) is listed as endangered, and is apparently suffering the effects of climate change and grazing.

In the past, Aboriginal people tapped the trees to allow the sap, resembling maple syrup, to collect in hollows in the bark or at the base of the tree. Ever-present yeast would ferment the liquid to an alcoholic, cider-like beverage that the local Aboriginal people referred to as Way-a-linah.

The practice was adopted by the European settlers, such that when the species was described in 1844 for the first time  by the British botanist Sir Joseph Dalton Hooker it was already known as the cider tree or cider gum.

It does not appear that the sweet fermentable sap is restricted to the endangered subspecies; and indeed, some quick Googling shows Eucalyptus gunnii to have some nursery availability, especially in the UK.  In the US, hardiness is an issue; whether it's hardy in Zone 7 or only in Zones 8 and up is a point of contention between sites like Plants For A Future and the Urban Forest Ecosystems Institute.

Wikipedia has a bit more information, and further indicates that the Cider Gum seems to have rather a lot of popularity in the UK.

And now, just for fun, here's part of what old Sir Hooker had to say about the cider tree:


Note on the Cider Tree
by J. D. Hooker

It has long been known to the colonists of Tasmania that a species of Gum tree inhabits the elevated table-lands of the interior of that Island, which, during certain seasons of the year, furnishes a copious supply of a cool refreshing liquid, called cider by the stock-keepers. This circumstance has given rise to the apellation of "Cider tree", a name for several years known to naturalists, who were, however, till very recently, ignorant of the real nature of the tree in question.

The first particular notice of it which, as far as I am aware, ever appeared in print, is contained in Ross's Hobart Town Almanack for the year 1835, where, in a list of the native plants chiefly drawn up by Mr. Backhouse, the Cider-tree is mentioned as a species of Eucalyptus growing in the higher parts of the Island, and on the tops of mountains. In Mr. Backhouse's valuable botanical notes on the Vegetation of Australia and Tasmania, that gentleman mentions it as not having been seen by him, and as producing a liquor resembling black beer, obtained by boring the trunk. Lieut. Breton, in his " Notes of an Excursion in Tasmania," printed in the Tasmanian Journal, at v. 2, p. 140, more partticularly notices this tree, and the method employed for collecting the sap. He says, "The shepherds and stock-keepers are in the habit of making deep incisions in the bark, wherever an exudation of the sap is perceived upon the bark. The holes are made in such a manner as to retain the sap which flows into them, and large enough to hold a pint. Each tree yields from half a pint to a pint daily during December and January; but the quantity lessens in February, and soon after ceases. The cider or sap of the tree has an agreeable subacid taste, and sometimes is of considerable consistency. It is said to have an aperient effect upon those who drink much of it."

A close reading of the rest of Sir Hooker's account will be of interest to anyone actually interested in growing these trees, for he describes in detail his excursion through a forest of them, their habitat and relationship to the landforms where found, their apparent hardiness in the face what he describes, though not in so many words, as aboriginal practices of forest management by means of deliberate burning, and the tree's survival (where many other local species did not) of "The Great Frost of 1837".

So, how about it, Permies?  Who is growing cider trees?

Luke Williams
Posts: 1
posted 1 year ago
Great post. I have made this account to commend you. I stumbled across it while performing an initial google search on the cider gum, as the gum and its alcoholic extract may very-well become a subject in a developing research project.

I am sad to see this thread did not eventuate. But I must thank you for the source material - the writing by Sir Hooker made for a great read. Though it did make me laugh when he mentioned the lack of edible plant foods on the continent - how wrong he and many colonizers were.

I am going to have a look around, and who knows, I might end up staying.
All the best from Melbourne Australia. Thank you again!
greg mosser
gardener

posted 1 year ago
interesting! looks like it's probably just out of my zone as far as winter hardiness goes.
Anne Miller
master steward

posted 1 year ago
Is this the same tree that was popular as a house plant? Or was that a different variety?

I ask because the color and shape of the leaves is what I remember that my brother-in-law had.