Transitioning a trembling aspen woodlot/windbreak to something else

Gordon Haverland
Posts: 489
Location: Dawson Creek, BC, Canada
42
posted 1 year ago
Up here, having a woodlot/forest of trembling aspen is the typical situation.  If you have a few hundred feet of dense trembling aspen, they do fine as a windbreak.  But when people start to cut down aspen on the upwind side, you eventually reach the point where the remaining aspen are not effective, and they start to get broken and die.  There is the odd balsam poplar, willow and spruce in their as well.

I have one "woodlot" on the windward side of the house that is 100-ish feet deep on my side of the property line, where one windward neighbour is cutting down aspen and the other windward neighbour has horses that are slowly taking down aspen as well.  That block of aspen is not dense, and is becoming non-viable.  We are marginal for water here, and so there typically isn't enough moisture in the soil or held in by the weeds, to allow broken trees and branches to break down at any reasonable speed.  I have been thinking about planting clover and/or vetch on the ground, to hold in  more moisture, and to also provide nitrogen to the aspen in the hopes of helping them last until I can transition the woodlot.

I have a second woodlot, which has a sewage lagoon in the middle of it.  The density of trees here is higher in places, but also contains willow which are not as tall as the aspen and poplar.  The upwind trees are all being knocked down by horses in this area.  But a significant chunk of the centre of this woodlot is now more littered with dead and failing trees, than trees that are capable of fighting the wind.

Both woodlots have some trees right up to the property line on my side.

Way back when on the Great Plains, people would plant a lot of Osage-orange to define field boundaries (aka hedge).  Horse high, bull strong, pig tight.  I ran across some mention somewhere, of a mixed Osage-orange and honey locust hedge, but not enough to plan from.  I have a deer problem (deer being whitetail, mule deer and moose - possibly elk) and I have a wind problem (I am 5 miles downwind of a 130+ MW wind farm.

So, the first row of several different kinds of windbreak will mostly be "hedge".  I'm hoping for 20 foot tall, I can live with 15.  If I don't do the fancy bending and tying of English hedges, I can get the tops of these trees out of grazing distance in 4 or 5 years.  I am planning to space the trees at 2 foot intervals, which is not as dense as some hedge was done.

The plans for the area directly west of the house, was to put a double row of Siberian pine on a 20 foot spacing immediately downwind of the hedge, where the second row is offset and =placed another 13-14 feet downwind.  There are some trees where I would want to put hedge, and where I would want to put pine.  I am hoping to have a 50-ish horsepower tractor for next season, at the moment everything is manual.  If the hedge gets to 15-20 feet in 4-5 years, it should start to shoulder some wind burden from the aspen that are closest to the house.  I'm thinking that once the pines get over 25 feet, I can start removing all the aspen, poplar and willow in this area.

The pines will shade the hedge in the morning.  But, on the summer solstice, we have light for maybe 20 hours of the day?  The mountains are to the west, so it does get dark, but not long after midnight you start to see light coming from the NE.  Sunrise is still a few hours away at that point.  So the hedge would still be getting 10 hours of sunlight in the afternoon (on the solstice).

To plant the Osage-orange or the pines, in places I need to cut aspen down.  There is a stump and aspen roots to deal with (of my 40 acres, I suspect 10 acres have aspen roots through the area).  The recommendation with doing any kind of property line change affecting the flow of deer into and out of your property, that you do so slowly.  Because the fenceline is so bad here, this is one of the main routes for deer using our land.

On the north side (downhill) of the barn and west of the sewage lagoon, I would probably look to put pines downwind of the hedge as well.  I've got more trees, including more willow close to that section of property line.  I will have to use the tractor to help in falling most of the trees in here, because the power line runs about 100 feet east of the property line in much of this area.

I took some pictures with a candybar phone (1600x1200 or 1200x1600), used ImageMagick to reize to 640x480 (ish) using a Lanzos filter to distort/resize.  I hope those work okay.  I debated using something like pngcrush to compress them a bit more.

The first picture is a picture from the west side of the house, looking west to the woodlot.  The three spruce trees hide a little bit.

The second picture is a view towards the canopy, upon entering the woodlot. 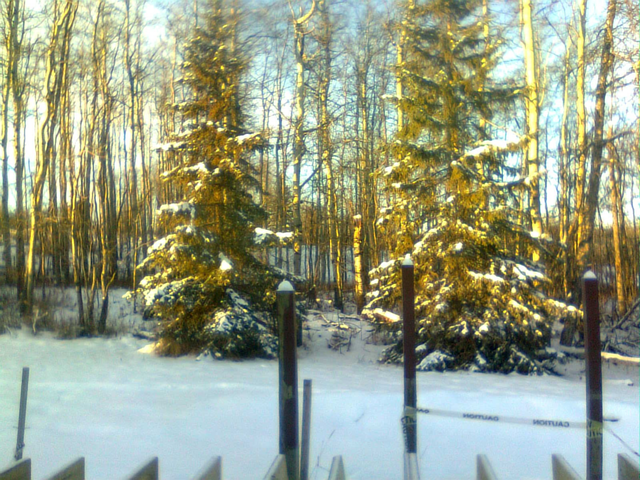 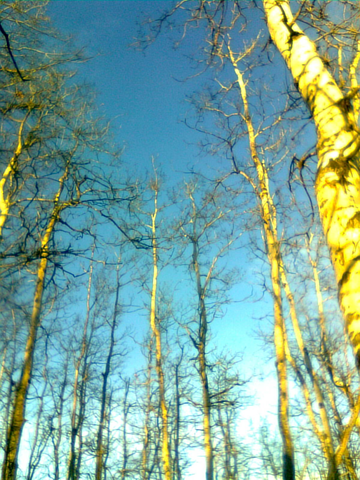 Gordon Haverland
Posts: 489
Location: Dawson Creek, BC, Canada
42
posted 1 year ago
The location of the south (uphill) board fence is about 25 feet south of the property line separating  the two northernmost of my west neighbours.

I took a picture to the west from the west edge of my woodlot, about 5 feet north of those two neighbour's property line.  There is some shielding form trees and from landscape relief.

I also took a picture from the north edge (downhill) of the woodlot, looking west.  With the exception of that shed and tree in the centre, there is little windbreak to the west in the 1/8 mile to the county road to the west.  On the other side of the county road is a bit more than half mile of open land. 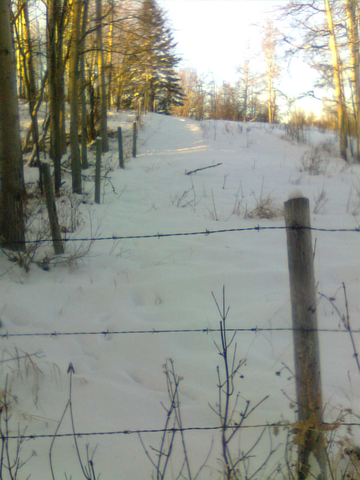 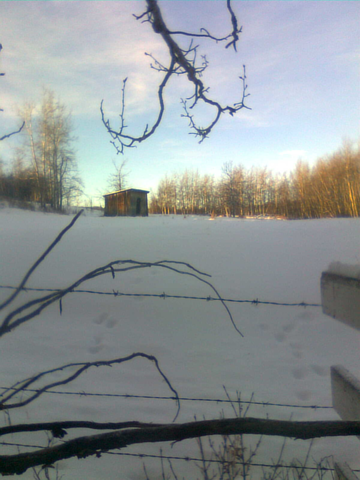 Gordon Haverland
Posts: 489
Location: Dawson Creek, BC, Canada
42
posted 1 year ago
The property on the left side of the fenceline in picture 241 above, looks like there are more aspens than there really are.  He has been cutting aspens down more or less constantly for a couple of years.  I think the reason to not get to these, is that they are too close to the fenceline.  But the wind will eventually knock them over, probably onto the fence.

All of these have the same problem, not enough aspen to stand up to the wind much longer.


The two board fences should get "shortened" to end about where the pines will be planted.  But eventually there should be a continuous hedge of Osage-orange which runs from the south edge of the barnyard probably 1/3 mile to the south edge of the property.  There should be about  a 12 foot grass buffer layer between the hedge and the fence, which a person needs to be able to get to with a mower on occasion.   I'm expecting the two rows of pines to be planted at 33 and 47 feet off the fenceline.  From a bit south of the north board fence, to almost the north border of the farm, there is a power line which runs parallel to the fenceline, but about 120 feet in.  The pines in question (Siberian pine) should not be very fast growing, so it will take them a while to get as big or bigger than the aspens.  The Osage-orange hedge should be pushing winds to about 30-35 feet, so any height they get beyond that, they will have to earn against the wind.  If they get much above 70 feet, they could cause problems with the power line should they fall.  But by then, maybe the power will be buried?

As far as next year goes, I think I start in the SW corner of this between the board fence woodlot, and just clear out trees in the first 30 feet or so.  I will need to have the trees fall NE to NNE in order to not damage either fenceline or newly planted trees.  I don't think it is feasible to look for a spot which doesn't have tree roots, as with aspen all these trees are likely clones off the same set of roots anyway.  When it comes time to extend the hedge and pines to the north in future years, I will need to see how advanced the hedge and pine roots are, and possibly trim them back if they have gotten too far north.  On the ground in the woodlot is weeds, some small aspen or poplar, the odd small willow, some dogwood, and some shrub I don't know (yet).  What I am thinking, is to broadcast probably red clover in this area.  The idea to provide some nitrogen to help the aspen survive, and to also have a living mulch increase how much moisture is in this area, so that the rate at which wood rots increases.

I suspect the Osage-orange could be in danger of the same problem many of the aspen on the fenceline are seeing (especially at the north side), that being sunscald in the spring from direct sunlight and sun reflecting off the snow.  I believe the last direct sunlight hitting any part of the farm is about 2:30 in the afternoon now, and that is the NE corner.  So where this woodlot is probably closer to 2pm (earlier?).  This sunscald problem has to be a closer to spring problem, when the sun is higher and we are not shadowed by the top of the hill.  I had read that a person can use a good white exterior latex paint on susceptible trees, to stop from absorbing so much sunlight.

Once the hedge and pines are established (and the aspens removed), this area will mostly see sun up to about 2pm, then the pines should start creating shadows and this area should avoid most of the late day heat.  It should still get lots of sun 11-13 hours on the solstice?).  But small trees and shrubs that don't need heat are probably what should get planted in here, with some kind of ground cover.  I'm going to try replacing some of the grass near the house with violet next year.  The most foot traffic it gets is from deer, and the Osage-orange should gradually deal with that.

But part of the plan for the farm, is to have lots of kinds of fruit, such as berries.  Some will be used to make mead (which means honeybees at some point) and some may be 'leased" to local farmer's market people that make berry pastries.  The pomace from the berries should go to chickens and pigs at some point.  The fence needs work before I can have too much livestock other than cows, and I don't think it would hold them in at the moment.  I need to grow some fence posts first.

In the past, we could get snow (even a lot of snow) in any month.  How much is a little bit of global warming going to change that?  This last summer, our first frost was a killing frost.  And we had a typical "Indian summer" after that, but lots of things were dead from the frost.