. . . I for one - will not accept ANYTHING stamped by, approved by, or recommended by the USDA, FDA, EPA or the E.T.C. I could cite dozens of anecdotal examples why I'm so jaded ... here's a recent one:


A "normal" mangosteen powder will typically show only 0.12 to 0.17 ppm of lead. But this USDA certified organic mangosteen powder contains nearly 100 times the typical levels of lead (and is obviously contaminated). This also tells you that in some cases, "organic" means nothing at all. - - Mike Adams, Natural News

the government" isn't really a singular entity, nor is there only a single government that has nutrition guidelines . . . Admittedly governments are influenced by lobbyists from the meat, dairy, and grains they subsidize, in terms of Non-government recommendations.

I don't believe anyone said "the government is a single entity", or that "there is only a single government with nutritional guidelines". Every US government department or agency I'm aware of that does testing are guilty of flawed procedures and inaccurate results. Probably one of the worst factors are the corporate lobbyists; and I'm not aware of a single government in the developed world that is not subject to this corrupting influence. So - I for one - will not accept ANYTHING stamped by, approved by, or recommended by the USDA, FDA, EPA or the E.T.C. I could cite dozens of anecdotal examples why I'm so jaded, but I suspect - with this Permies group - it isn't necessary. All that IS necessary is that we all start thinking independently ... rationally. Far too many Americans just simply want to believe everything our government says ... everything the AMA says ... everything the media says. Have you never caught your government in a lie or even just a mistake? How many lies or mistakes do you suppose have gone undetected - at least by you?

Once a lie (or a mistake) has been perpetrated for a sufficient length of time - the perpetrators (usually the government, sometimes institutions or industries like the AMA, the Am Dental Assn, Big Pharma, the Asbestos industry, etc. etc.) cannot come clean. The liabilities are too high. Like fluoride in our drinking water (a boneheaded decision that they can never reverse). Like mercury in our fillings. Or the sanctioning of GMO's, refusal of fair labeling, or just the ability for a private organization to patent a living organism. It's similar to Congress' inability to repeal laws; no matter how bad they are, they stay on the books forever, with only very minor modifications. In a way, this propensity for avoiding liabilities makes sense: if the error was admitted and atonement required - who pays? Our already broke government and the NEXT generation of taxpayers?


... If you check, the vast majority of guidelines around the world, promote having vegetables and fruits as the largest category, followed by grains, only then followed by meat&alternatives, dairy&alternatives and other.

True. But why? The vast majority of the people on Earth cannot afford meat. In our modern agriculture - the amount of money, time, land, petroleum and carbon footprint required to feed a population MEAT is 10 to 20 times greater than it is to feed them vegetables and grains. And that figure is based on the meat manufacturing system in the USA - AFTER ALL OF THE GOVERNMENT SUBSIDIES are factored in. The expense of including meat in our diets WITHOUT subsidies would be even greater than a 10-20 factor. The average American could NOT afford to eat meat on a regular basis if it were not for the feed-lots and meat-factories funded by those subsidies. Now - if that's true for us privileged Americans - imagine how true it must be for the billions living in underdeveloped, underfunded countries?

So what's a government to do? Tell their masses
"If you want to be healthy - you must include large amounts of meat and animal fats in your diet? And not that cheap meat that McD sells - it must be the very expensive grass-feed, antibiotic and hormone free meat. BUT - there's not nearly enough of it for YOU - so, sorry."

Or - do they publish the official nutritional guidelines that the government and the people can actual obtain and afford? I think the later. Very often - it makes perfectly good sense WHY our government lies to us. But that doesn't change the fact that it's a LIE.

The Food Cure - a documentary about cancer

Having just been warned by Shane and Ben Goldacre to be wary of published information that lacks credible documentation - I went back and reread the anti-Gerson article from the registered UK charity, Cancer Research UK. It included over 2000 words, innuendos and implications attempting to discredit the Gerson Therapy - WITHOUT ONE SINGLE reference to their sources. Seriously, we could take all of their unsubstantiated, libelous, propaganda at face value -- OR we can do as Goldacre suggests and hold them accountable to journalistic and scientific practices of a simple bibliography and/or references.

Heck, even Wikipedia's article on the Gerson Therapy lists 21 references, 6 bibliographies, and 2 external links.
Cancer Research UK: ZERO But there is one link. Where does it link to? Their very own website that lists (or advertizes) their choice of "Complementary Therapy Organizations".

Cancer is a serious illness. Always consult your doctor.

I am not aware that the Gersons, Sarah or Jennifer have EVER suggested anything less. (I'll assume that's not what you meant to imply.)
show more
8 years ago
food as medicine

The Food Cure - a documentary about cancer
I have not read Ben Goldacre's book. I did go to his website and listened to his 20 minute TED talk (2011). I agree with Shane and Ben that we all DO need to be very wary of all tests, trials and scientific findings. However, it does NOT appear that Goldacre is down on alternative, holistic or natural medicines - he is down on ALL medical procedures and pharmaceuticals that lack bona fide tests and trials. It is true that in 2004 Ben Goldacre wrote a short article addressing some side affects from 1986 that MAY have resulted from the Gerson Therapy. But don't loose sight of the hundreds of articles he's written decrying conventional medical and pharmaceutical studies, practices, contradictions, side affects and deaths. His entire 2011 TED talk was focused on CONVENTIONAL medical procedures, tests and findings.


Turns out that cancer is really diverse, very hard to treat, and there is no simple answer, no matter how appealing "alternatives" may be marketed as.

I agree with Shane. But likewise: there is no simple answer, no matter how appealing "conventional procedures" may be marketed as. And you know they are. They are marketed FAR more aggressively than the Gerson Therapy. And in my opinion - are even further down that slope than the Gerson's. Just count the number of pink ribbons worn by professional athelets, sports casters and fans at any one of dozens of pro-foot ball games. THEN go and examine the number of carcinogenic foods and beverages that are sold (by the tons) at those same games. (Or just try to find ONE non-carcinogenic product.) Could the Susan G. Komen foundation slip any further down that slope?
show more
8 years ago
food as medicine

goat parkour
OKAY - my last post was a little "out-there". It postulated an analogy between the intelligence and independence of Goats -- and that of human kids. (I stand behind that analogy and retract nothing. But ...)

These videos struck a whole new and different chord with me. Maybe with others too.

... I eat meat!
But not one day goes by that I don't question or at least think about the meat I'm about to eat.
Did they play?
Did they think?
Did they laugh?
Did they suffer?

I fear that if WE did not provide an opportunity [for goats] to play ... to think ... to joke ... to laugh ... to win or loose -- if we humans did not provide these "life experiences", would the Goat Fun end?

In this vast, ecological world of animals - those that are not pursued for meat or skin or horn - are doomed for extinction. The animal whose meat is most coveted (cow, pig, chicken, turkey, ...) is under ZERO threat of extinction. 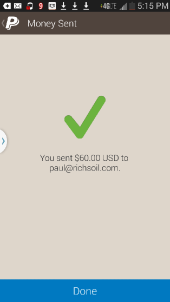 podcasts and videos on the jump drive
Paul, thanks for doing this. My $60 is sent.

Jeff
show more
8 years ago
tinkering with this site