Get all of the Podcasts in convenient, giant zip files

Paul visits with Dr. Julia Winter. Julia is a Doctor, Patreon patron, Kickstarter supporter, and Permies Staff member. They have a nice chat about Paul's analysis of her 40 acre farm.

Part 3 sees Paul and Julia discuss more design things such as the finer points of making the berm, getting rid of weeds, permaculture, water storage and drain off, moving livestock around a pasture, rocket oven, and active competent caretakers with realistic expectations.

They also discuss how natural drainage / puddle accumulation in low areas would make a nice play-pen for pigs, a garden water-feature with goldfish, or part of an irrigation system for different fruit and nut trees / bushes. 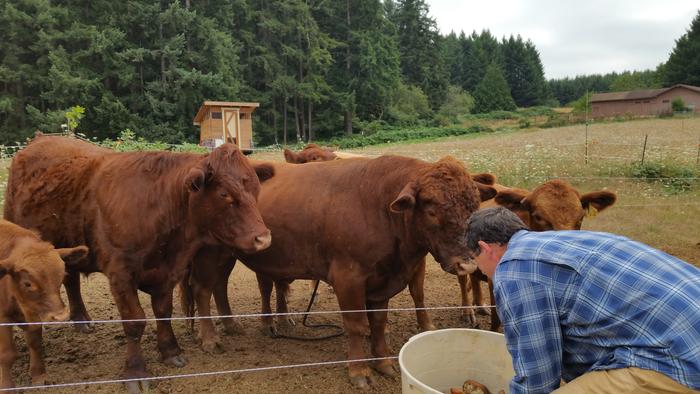 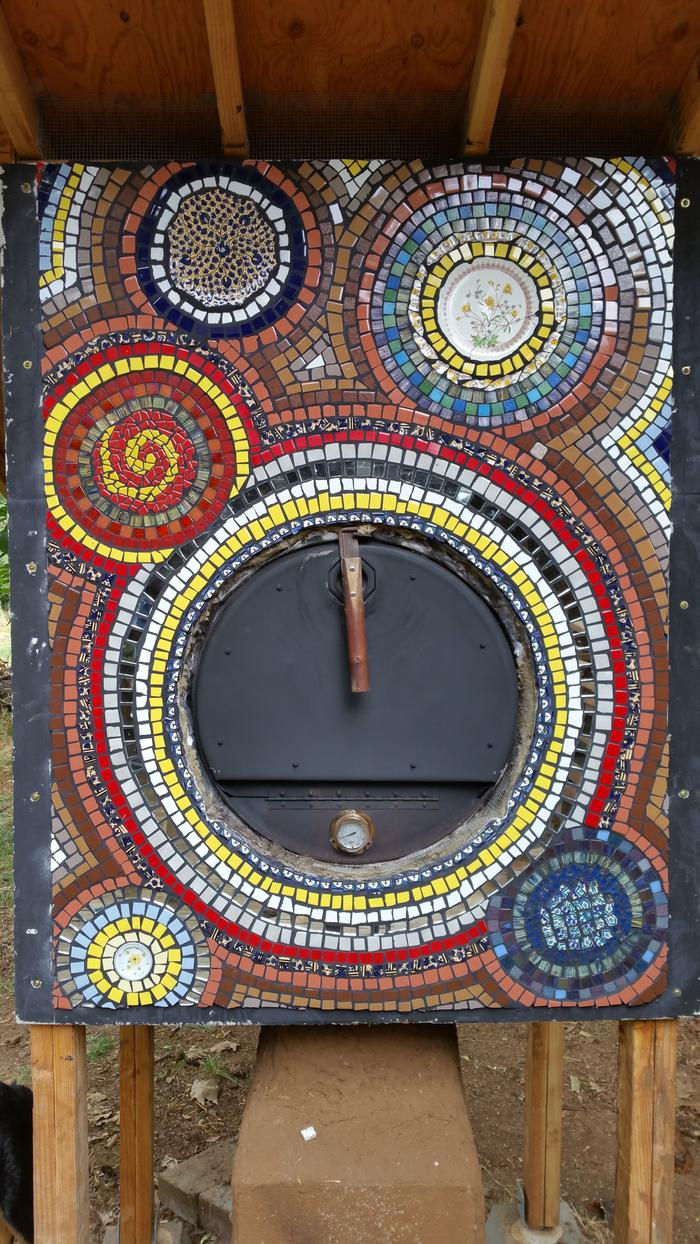 Help support the empire and get all of the podcasts in a bundle here in the digital market at permies.

This podcast was made possible thanks to:

posted 3 years ago
Part 3 sees Paul and Julia discuss more design things such as the finer points of making the berm, getting rid of weeds, permaculture, water storage and drain off, moving livestock around a pasture, rocket oven, and active competent caretakers with realistic expectations.

natural drainage / puddle accumulation in low areas would make a nice play-pen for pigs, a garden water-feature with goldfish, or part of an irrigation system for different fruit and nut trees / bushes.

posted 3 years ago
I enjoyed this podcast as usual, and agreed with most of the advice. Unfortunately though, Paul repeats some commonly held and understandably common forester fallacies about Douglas fir and conifers in general. While of course harvesting these trees can be called for at times and I have done so when we have a use for the wood and space they would leave behind, they do not "desertify the landscape." They in fact support salmon streams, massive amounts of mushrooms, dozens of edible and medicinal plants, and ecosystems with close to the highest biomass on Earth (2nd only to Redwoods and up to 10x a tropical rainforest) (Noss). The contention that Doug Fir "desertifies the land", that Paul mentions several times, is an understandable misconception held by many in the forestry and gardening world. It is allelopathic as he says, but not to a diverse array of plant and fungal associates native to the areas from Mexico to Alaska, the pacific to the Rockies, and sea level to 8000ft. So of course it is in no danger of extinction, but I post this more for the immense amount of life Douglas fir and other conifers support in the NW, especially older trees.

I have been told by experienced mushroom hunters in the NW that many of the edible mushrooms that Doug fir supports only start to fruit at 70yrs, which happens to be the stated age of her trees. In addition to my admittedly biased but pretty well researched opinion (I have worked as an educator and backcountry ranger in several national parks in the NW), the contention of Doug fir desertification contention is challenged by both Mollison generally in the trees section of the big black book. It is also contradicted specifically by University of British Columbia’s Suzanne Siamard (https://www.ted.com/talks/suzanne_simard_how_trees_talk_to_each_other/up-next?language=en), as well as by Noss Redwood Ecology. This misconception, that is still held by many foresters, besides fincancial incentives to justify cutting forests, is likely due to their observation of the fact that Doug firs, like many dominant canopy trees, do keep their understory clear of most non-native associate plants evolved to coexist with them. It is also based on older research on overly thick “dog hair” second growth that was often herbicide ridden and the soils were very different from an old growth forest or even one that has gone through 70yrs of succession without chemicals. However, the clearing of the understory of nonsymbiotic plants by Doug firs’ root exudates (many trees, including many oaks do this as well), helps reduce their fire risk. On the other hand, Doug for has the highest diversity of associated fungi of any North American tree, and western hemlocks and Redwoods both require an inoculation of fungi that requires a host of Doug fir and/or alder, and therefore have the shade tolerance to thrive under other conifers, unlike Doug firs which will drop foliage and branches getting less than 6hrs of sunlight. The hemlock’s shade tolerance is partially a product of the hemlock's immense surface area greater than any other tree in north america relative to their footprint (up to 30,000x). While Douglas fir is not quite as high on that surface area list as a result of fire adaptation, it shares the evergreen needle characteristic and with its immense height and the geometry of needles versus broadleaves, surpasses the surface area of any deciduous tree, especially in winter. Together with other evergreen native NW plants in the understory, this  makes coniferous forests vastly better adapted for rain absorption in the winter, when the Pacific NW (where this site is) receives over 90% of its precipitation. Deciduous trees are vastly lower in surface area relative to their footprint (Noss), especially in winter when we receive most of our rain in the NW, and therefore do not slow and hold the water in the landscape nearly as well. They are better adapted for harsh winters and wetter summers than the maritime NW gets.

So if the goal is to store as much water as high in the landscape as possible, nothing can beat a conifer in the northwest at creating surface area for rainwater absorption and diversion over as long a path as possible.  A Doug fir can grow exponentially faster, and therefore sequester more carbon and retain more rainwater and condensation, every year of its life for 1200yrs, and Redwoods (also referred to as weeds by some) 2250yrs.  The water caught in the winter is then released throughout the year and supplies much of the summer moisture downwind (usually east). The loss of coastal conifers is a major cause of desertification inland in California and the NW.

The “water thief” contention has been put upon many other trees as well, including cottonwoods, but that is based on an integral misunderstanding of how trees interact with the landscape. Byproducing yields of fruit, nuts and hardwood relatively quickly, deciduous trees have been less prone to this wrap. Conifers however, only produce good timber over a much longer interval (really nothing will ever compare to old growth now 98% gone) and they also have much less obvious byproducts in the fungus and salmonids they support in massive quantity of allowed to function in a healthy global ecosystem. I think this is why this misconception about them being anything but integral to the NW ecosystem is so prevalent. I do not have a solution for the fact that the conifer-salmon ecosystem has been so badly damaged, but I still believe conifers are essential to water retention landscapes in the northwest. Northwest native peoples did burn to keep oak Savanna’s where hunting was favorable on flat plains, but they also seem to have respected that the slopes were best covered by conifers, and the conifers were given respect as they had key places in very important structures like longhouses and fish traps as well as religious customs and stories. All in all, another good pod cast, but this common misconception held by foresters, gardeners, and the public at large is harmful to our watersheds and collective welfare in the long term. Also, Doug fir does very well in hugel beds if you have no other use for it. I think it’s because the fungal associates it harbors are beneficial to the soil.

posted 3 years ago
I figured I might visually present a possible Pacific NW Evergreen Guild to get my points across: 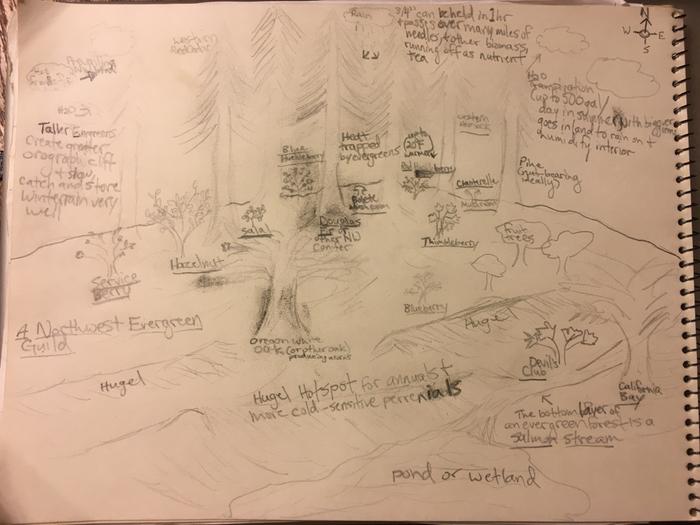