The Adventures of Pip by Enid Blyton 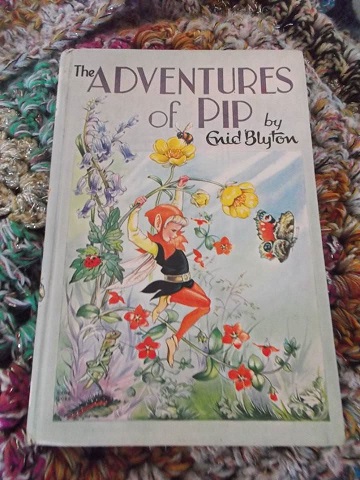 Written by the famous UK children's author Enid Blyton and originally published in the 1960s, this collection of short stories is a delightful, insightful introduction to the flora and fauna of the UK, and how rural life was intimately linked with the bounty provided by nature. The stories are short and illustrated with simple line drawings. They are suitable either for reading to very young children or as reading practice for slightly older children.

The protagonist is a mischievous pixie called Pip and readers of all ages will be delighted his escapades and the way he interacts with and uses the natural world around him. In the introductory story, Pip learns to collect glue from the buds of the chestnut trees to fix a broken sugar basin. Permaculturists will love the emphasis on solving practical problems using natural, locally sourced materials.

This was originally published in two volumes, The Adventures of Pip and More Adventures of Pip. Later editions contain all 60 stories in one 184 page volume, with the same title as the first volume. Do be careful if you purchase on older copy that you are getting everything you thought you were paying for. The kindle edition appears to be the full version. Other ones listed on amazon seem to be a bit mixed up, with some illustrations obviously not matching the publishing dates claimed, so extra caution is called for. For that reason, I have provided links only to the kindle versions.

Here is a sample story, where Pip needs to find a purse for his Aunt Twinkle and is provided with one by a plant in return for planting the seeds it contains. 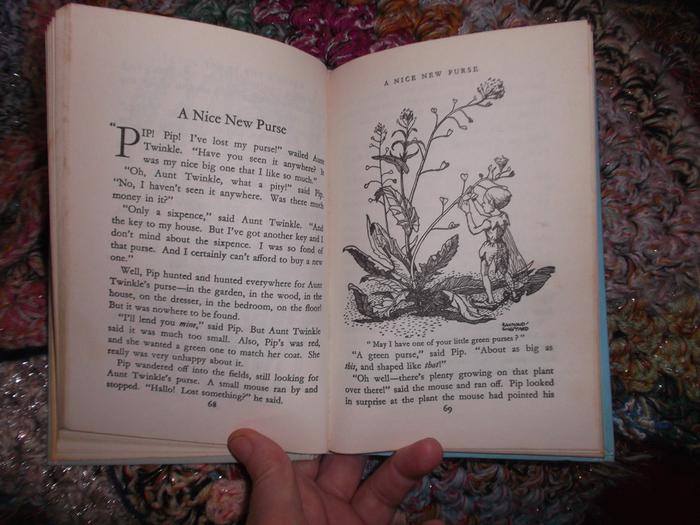 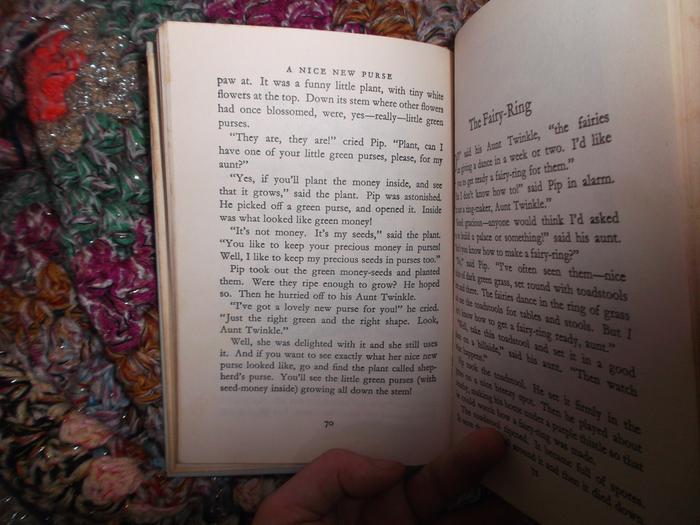 My mother read this to me as a child, and I think it shaped me!

As a young adult, I found another copy, this time with a shiny, illustrated cover and I eagerly bought it, for the grand sum of 50p, and have treasured it ever since. I made certain it was on the reading list when my son learned to read - the stories are just the right length for beginner readers. Almost all are three pages, with an illustration. As there are 60 stories, if your child reads one a day every school day, the book will last a whole term and become an integral part of their education and a superb introduction to life in the UK countryside.

The cover illustration is based heavily on the stories within.

Pip is swinging from a buttercup stem, which is arching under his weight and, no doubt, scattering golden pollen onto his his head. Just about to land on one of the buttercups is a bumble bee, presumably the one that Pip visited once, with a little home in a grassy bank, packed with moss and grass and pollen from the flowers. She was raising a family in there, with pots of honey to feed them and egg cells that she'd made, each one with an egg inside. Pip was surprised to learn that she sits on them, like birds sit on their nests of eggs. Climbing up the leaves of the buttercup plant is a shiny ladybird. She is so shiny because Pip polishes her every day to thank her for laying the eggs which hatched into grubs that ate up all the greenfly that had been damaging his rose bush.

Behind the buttercup is a bluebell, like the ones that carpet the woods nearby. Even rich Mr Big-Brownie couldn't buy a carpet as beautiful as the one provided by the bluebells in the wood. At Pip's feet grows a Scarlet Pimpernell plant. It has has another name too, Poor Man's Weather-Glass, because it shuts up its flowers when it sees a black cloud coming. So remember to check the Pimpernell flowers before you leave the house so you know whether or not to take your umbrella with you.

And there's the grasshopper that Pip took to the Sports to win the long jump. Grasshopper was so pleased that he now allows Pip to use him as a violin by rubbing his knobbly leg up and down against his wing-case each summer. And a woolly bear caterpillar like the one who gave his old coat to Pip to wear last winter is crawling right in the bottom corner of the picture. Flying away to the book's edge, ready to read the stories, is a butterfly. I wonder if she's been laying eggs on the nettles like the Red Admiral butterflies do? And I wonder if she ever stings herself and has to look for a dock leaf to rub on to make the stings better like poor Jinky had to when he was playing hide and seek with Pip?

Here's a sample from one of the stories, to give you some idea of the depth of information packed into them.


Pip wandered off into the fields, still looking for Aunt Twinkle's purse. A small mouse ran by and stopped. "Hallo! Lost something?" he said.

"A green purse," said Pip. "About as big as this, and shaped like that!"

"Oh well - there's plenty growing on that plant over there!" said the mouse and ran off. Pip looked in surprise at the plant the mouse had pointed his paw at. It was a funny little plant, with tiny white flowers at the top. Down its stem where other flowers had once blossomed, were, yes - really - little green purses.

"They are, they are!" cried Pip. "Plant, can I have one of your little green purses, please, for my aunt?"

"Yes, if you'll plant the money inside, and see that it grows," said the plant. Pip was astonished. He picked off a green purse, and opened it. Inside was what looked like green money!

"It's not money. It's my seeds," said the plant. "You like to keep your precious money in purses! Well, I like to keep my precious seeds in purses too."

Pip took out the green money-seeds and planted them. Were they ripe enough to grow? He hoped so. Then he hurried off to his Aunt Twinkle.

So now you know that Shepherd's Purse has long flowering stems which flower consecutively, with the new flowers at the tips and older seed-pods further back along the flowering stem. And that each seed-pod is shaped like a purse and contains several seeds which the plant considers very precious and will only grow when ripe enough. And your child is no doubt going to notice any such stems when they go and play in the fields, like Pip does and like I used to, and no doubt stop and sit and sneakily pick a miniature purse and take them apart to see if they really do contain little green money-seeds. They might just plant them too. I know I did...