hans muster
pollinator
Posts: 247
57
posted 2 years ago
R. Ranson wrote in a post that sometimes she has no time to malt the grains herself for making her beer.

raven ranson wrote:I found that  Small Scale Grain Raising and Homegrown Whole Grains really complimented each other.  Each on their own is a bit too introductory, but together they work really well.  In many ways I wish the books had more, especially before I had the courage to try growing my own grain.  However, once I grew my first grain patch, I understood why these bits were missing.  All the information we need is in the grain.  I learned so much more by watching my grains grow than I did reading these books.  Then, I realized the purpose of these books was to inspire us to try growing grain.

Uprisings on the other hand, isn't much of a how to book.  I think there was a bit in there, but not it's main focus.  This book is full of examples of different communities that have grown their own grain, and some of the challenges they faced.


Processing oats and barley into human suitable food when they have such annoying hulls... how did they do it in the past?  Good question, but I don't think you'll like the answer much.  Basically, they didn't... or at least not food like we are use to.  This kind of grain was mostly malted for beer, or fed to livestock.  Some peasants ate it of course, but this was beneath the kind of person who knew how to write and could afford parchment and ink.  Basically, no contemporary records.  But it was done... so we have to interpret history to figure out how it might have happened.

I know this is in my brain somewhere and it involves rubbing or smashing the hulls off... maybe cracking the grain just prior to using it, then washing the grain till the hulls come off...but I don't think that's right.  I took a llama to the head yesterday so it's basically like cleaning up a huge earthquake in my mind palace.  If I come across the info in the rubble, I'll post it here.  Until then, we need a new thread where we can explore ways of harvesting and processing grains.  I would love to hear everyone's ideas and experiences on this.


Malting my own grain (which is excellent for all those varieties that have tough to remove hulls) to make beer is a really neat thing to do.  I'm still working on perfecting this.  It use to be a common household occurrence to malt our own grain and brew our beer.  I don't have a good set up in our house for this, yet, so I'm still experimenting.  Here's a link to my very first grain to beer experience.    I was working from the recipe ideas in Wild Ferementation.  I know in my blog I say it was horrible, but it really grew on us.  It was a light, mildly alcoholic, refreshing drink... maybe a bit vinegary. 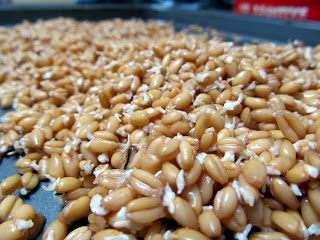 Eventually I hope to have a proper malting set up, where I can malt enough grain for 6 months worth of beer in one go.  I'm heavily inspired by the medieval methods, but am having difficulty finding good sources about it.  It was such a common thing, that no one really thought to write it down.  The book Cooking & Dining in Medieval England by Peter Brears has some of the best information about it I've found so far.  He even has diagrams of different malting setups in castles and manor houses.  Once I have a place of my own, I hope to use these to make a smaller version out of cob.  ...sigh...one day.  Until then, I keep experimenting with small batches of grains and wild yeasts.

What are your recipes? How do you do it?

I have read that corn was put in bags in rivers for a few days to sprout, and then roasted over fire to make malt. Other recipes use dehydrators, which use quite a lot of energy.

What are stories you heard, and recipes you tried?
hans muster
pollinator
Posts: 247
57
posted 2 years ago
https://books.google.ch/books?id=iLUaW0AIpmwC&pg=PA206&lpg=PA206&dq=homestead+malt+production&source=bl&ots=BqE6z1kFob&sig=v4YlzQ6wniIhVdWUZEBPz6WMUqY&hl=en&sa=X&ved=2ahUKEwi6rPD1x-3fAhVLaFAKHTE7BqQQ6AEwDHoECAkQAQ#v=onepage&q&f=false

on the preview there are two pages (209 and 210) about the malting process.

I didnt know about the crouching. Is it necessary?
Best