Posts: 582
Location: Lower Mainland British Columbia Canada Zone 8a/ Manchester Jamaica
10
posted 10 years ago
I'm at the last step and I'm uncertain of the side effects.

Built a portable rocket mass heater using pea gravel after pinching every last drop I could out of pauls videos, I'm not porting it anywhere but since I'm renting I wanted something that could be shop vac'd up and the heater itself is one mono unit that can be lifted out with one hand. I probably violated a few rules in making an under deck floor unit.

It unfortunately had to make 3 elbow turns to fit it into the space, so I'm subject to using an in line duct fan to get the kind of suction needed to not have backsmoke. I can live with that flaw because the tubes ended up in a "P" shape and the burn tunnel / barrel isn't large enought. it's basicaly a 6 inch T to an elbow up a 2 ft pipe, coming down an 8 inch 2 ft pipe then a T which the 6 inch elbow is inside and down to an 8 inch elbow and out to that P shape 6 inch pipe.

Basicaly the subject that I can't decide is, should I leave the exaust in the room since drying plant's don't care about Co2, or punch a hole in the wall and vent it out into the greenhouse. I mainly want to run it during the day to keep it fed so it's in sync with plant photosynthesis and carbon utilization. But right now I don't have a Co2 ppm meter so I'm iffy about killing the plants with too high levels.  On the flipside the drying room would essentialy have a constant saturation of moisture from the steam comming off the vent. I get to trapped the convection heat which is good for a room which is using a trinity of radiant, conductive and convection heating so no flaws in a leaky drafty structure can squash the project.

But I'm not strong in my understanding about how water behaves in a heated environment where radiant and conductive heat is coming up through the floor's , convective heat is racing upwards to the ceiling off the stove, cold humid air is rushing through the cracks in the building, and finaly steam and warm air is racing towards the ceiling from flue vent.  I can follow the initial smoke to see where things are going, but during that part I have the door open so I don't croak so not really seeing much.

I've watched the solar dryer videos but there seems to be two different theory's on what's most effective to dry foods. Problem is all video's look like a success.

If heats pooling on the sealing is it feasible that a downdraft towards cooler air exits on the floor will occur in a "Non" sealed room. Is it even possible with radiant heat coming up from the floor in the opposite direction? Some anecdote's from the solar dryer's arguments is that it's the draft that dries the foods not the hot air which in theory would be dry.
I've got allot of draft whirling about, but it's humidity is high and even higher if I let the flue out in the room. Letting the flue out in room seems to add even more draft which theoretically sounds great. But theory isn't going to dry this year's harvest unless it's backed by the laws of thermodynamics.

I'm not afraid of venting to the greenhouse, it will be mixed with plenty of oxygen from leaky openings, i'm not big on sealing things to death or gross insulation. I'm resolute in the health benefit's of fresh air in the winter, and tired of recycled air from a lifetime at a desk.

Basically what's the rule with moist air when your not dealing in a straight forward heat goes up cool air comes down model. I would be really happy if the extra moisture helped the heat flow down from the ceiling like the solar dryer's and the moisture goes through the deck flooring into the cold sand and cinderblock 8 inches underneath. But I'm willing to add another day to the project drilling and piping it out to the greenhouse, if all the extra moisture is going to do is fungi' fy all my plant material and the room itself. I don't want a mushroom farm if I can avoid it.

The ceiling's are that wavy pvc plastic, the walls are glass, the floor is sand with a raised floor so the tubing and pea gravel can run around the perimeter glass and the other side is basically the side of the house with glass to the inside.
It's a Lean - To - Rocket Mass Dehydrator if I don't screw up this last decision, or else it's a fungi farm.

Anyone who didn't smoke pot before science class have any clue how the water will behave in relation to the drying?
I would really like to see Skeeter's drying setup, as paul's video show he takes on allot of herbaceous yields. I saw his storage room for dried goods and it's something to salivate over, but not his actual processing environment.

I'm gunna go harass the rabbit's and have a smoke, and if I've been good this year maybe one of you out there will log on in 20 minutes and give me the authority of your experience in the matter. Theory is just not much of a wind to sail on in these grim financial times. 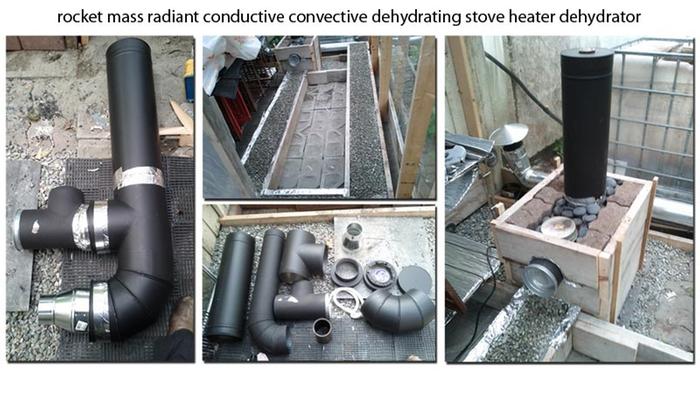 , I have no idea what moist co2 does but with any luck it will stay on the ceiling where I don't do my breathing. As for how things will dehydrate I'll find out tomorrow if I don't burn down the house.
Craig Conway
Posts: 79
Location: Maine, USA
posted 10 years ago
That looks cool

Posts: 582
Location: Lower Mainland British Columbia Canada Zone 8a/ Manchester Jamaica
10
posted 10 years ago
Thanks If I had known better I would have just used fire sealant instead of the silver stripes, but if I didn't get a 160 dollar ticket for using my cellphone I would of had the money to use a 10 inch pipe with a 6 inch double wall core, the money went right out the window trying to get the location of the pipe store on my phone.
Craig Conway
Posts: 79
Location: Maine, USA
posted 10 years ago
Sorry for hear about your ticket, we are slaves. Anyway, keep us posted on the results

Mike Dayton
Posts: 149
Location: sw pa zone 5
posted 10 years ago
CO2 is heavier than air and will build up from the floor.  If there are enough cracks down low it MIGHT exit.  But venting ANY wood burning stove in doors does not make good sense to me.  I would play it safe and vent it Through the green house to the out side.  You would still have the heat from the exit pipe to help heat the green house and no poisen gas in any of your buildings.  Up to You of course,  you can take a chance if you want to bet your life.  Maybe I am just too conservitive,  or maybe I didn't understand where you placed it.  .

Never doubt that a small group of dedicated people can change the world,  Indeed it is the only thing that ever has. Formerly pa_friendly_guy_here

Posts: 582
Location: Lower Mainland British Columbia Canada Zone 8a/ Manchester Jamaica
10
posted 10 years ago
I tried it, i sat on the floor just fine for hours. The structure's bleeding in so much air theres no depletion of oxygen, but I was more concerned with the effects of Co2 on drying plants as there may be residual stuff in the steam that exit's the pipe. I pretty much have the same concern if I vent it into the greenhouse as nobody want's guff coating the surface of the live plants. I'm glad to hear co2 falls to the floor that way it would be present in the greenhouse, but might not bring the creosote in solution to the plant's level. I'm so tired of this rmh right now, I've had to redesign it 3 times. Trying to get the exist pipe to exist forward under the burn tunnel due to limited space is going to kill me.

Anyone herd of someone needing to do this other than me due to space limits. I can't have any rear exist as I'm 8 inches from a glass wall.