New to the neighborhood

Lolly Knowles
Posts: 159
posted 9 years ago
I'm new to the permaculture idea although I've been looking for that secret several years now.  I was fortunate to find a piece of unimproved land six years ago and have spent the intervening time getting to know it, as much as you can with camping experiences that last a week or so at a time, seven months a year.  I still have a place "in town" more than 40 miles away that requires more time than I wish, but perhaps I can use some of the concepts there as well to make it a more attractive spot for a potential buyer.  Maybe I can create a small hugelkulture bed there this fall.

I'm located just above the 40th parallel in Indiana.  So far there doesn't seem to be a lot of information available in my area.  The local USDA office does set up informative seminars a few times a year, but short notice has kept my participation low.  One that I was able to attend last year was dealing with "no-till" farming methods and it made me happy to know that my property hasn't been under a plow for at least 25 years.

Anyway, I just wanted to say "Hello".  It would be nice to become acquainted with folks who know more and have experience.  I'm still trying to learn my way around the forum.  I hope the photo comes out and isn't too big.
tractor-and-outhouse.jpg 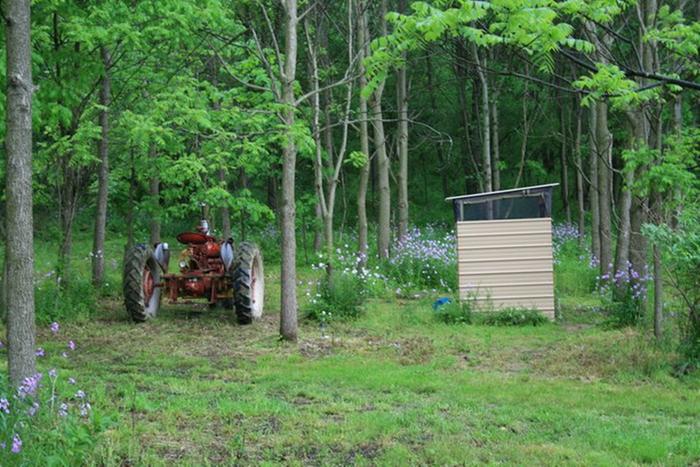 I just joined the boards today.  I live in the NE corner of Oklahoma, very near Tulsa.  And I am very interested in food foresting and passive solar home design.

I have been begging my husband to consider this lifestyle for more than a decade - with no results.  I still live on a suburban lot (with a raised bed organic garden of 128 sq feet) and a suburban ranch-style home built in 1979 - drafty as hell and a total energy waster!

You all are doing what I only dream!  So I congratulate you all and hope to learn all I can, so that one day I really can join all of you permies!

Lolly Knowles
Posts: 159
posted 9 years ago
Hello, MoniDew.  I'm pleased to meet you.  I traveled through your area of the country ten or so years ago, and don't remember much of the general landscape.  Rolling ground and grasses/grain crops with less tree presence than MO is the picture that memory is throwing at me.

Congratulations on the 128 sq. ft. raised bed on the suburban lot.  I have friends that bought the house next door, tore it down, then used part of the foundation walls to create their raised beds.  She freezes or dries most of the surplus harvest.  Four years later they had the shading maple tree taken out and created a raised bed over the stump that was left.  Raised beds are a great place to start gaining experience.

I am collecting material to create a hugelkulture style raised bed in my fenced lot.  I'm not looking forward to the [s]task[/s] cost of obtaining soil to cover everything.  I have great dirt at the farm, but that is a 90 mile round trip.  I doubt if I could transport it then shovel out the multiple loads from the back of my small pick-up for the same price or less than having a dump truck haul some in from a supplier.

I'm also thinking of picking up a few bales of straw, letting them season over the winter, then using them as planting medium in the spring by just cutting out a spot for the seedling roots and covering them with dirt.  I saw the idea in a video that may have been found on a thread here at permies.

Of course, my real love and focus is the farm to be, Lollyland.  My sister and brother-in-law have been part of that dream for several years and have contributed much labor to date, helping to clear understory in the forest and most recently creating a storage space where the fuel using equipment can be located for the winter, covered with tarp since there was no time for walls and a roof.

Yesterday I was able to visit with my oldest granddaughter and her husband.  They are in their 20's, want to be part of this future and are looking forward to assuming a roll in the creation of a viable lifestyle there.  I don't know if that means being part of the surveying process (using a bunyip that I created last week) during the cold winter weather.

During our conversation I mentioned the PDC classes and suggested my grandson (by marriage) look into them more fully.  If he thinks they would be a good fit for their eventual goals, he may sign up for the 8 day class to be offered in Illinois in January.  Both of them look forward to construction of an initial living space in the spring.  Granddaughter is offering her skills and interest to manage whatever animal husbandry we will need.  That removes a big concern for us older folks who were wondering if we'd really want to deal with pigs and goats a few years from now.

I can rattle on forever, especially now that the dream is getting closer to fruition!

Moni Dew
Posts: 33
Location: Broken Arrow OK USA
posted 9 years ago
yes, the expense of hauling soil in for your garden is the white-knuckle part of the whole thing.  And I do think that one big haul is probably better than several small trips.  Especially if you're doing all the work yourself.  That's asking a lot of your body!!  You'll be really sore for a week afterward.  Having the material onhand to distribute at your leisure is probably much easier on back/knees/shoulders, etc.

I remember the year we put in our garden beds - YIKES!!  Very expensive year for us.  And a first year garden doesn't yield much.  It took a good whole three years for it to start really yielding.  Problem is, around year 5 you have a lot of maintenance issues show up - so I am not sure that they ever really pay for themselves, overall.

Raised beds differ from food foresting in so many ways.  Rather than build up the soil you already have, with chop and drop mulching, using the root systems of trees, etc, one has to supply everything needed in a raised bed garden.  The idea of burying some organic material (log/stump, hay bale, etc) sounds like a good marriage of both concepts.

I do use quite a lot of homemade compost in my raised beds, for the organic material.  It improves my soil so much.  In NE OK, I really need the soil to hold moisture.  I added kelp & nettle, too, to see if it would help with moisture retention.  Our summers are blazing hot, and it doesn't rain for two months (July & Aug, usually) at a time.  I supply what I can from a garden hose.  But I still lost so much due to lack of moisture this last year.

I think you are so very fortunate to have younger people interested in doing this with you!!  Especially if one of them is in charge of the animals.  They will be there to carry on the legacy for their own children and grandchildren.  I happen to really like that idea.

As I stated before, I haven't been able to talk anyone into doing this with me.  Being a 51 year young grandmother myself, I am not at all sure I want to tackle this on my own.  My children are ages 20-30, and my grandchildren are ages 6-12.  I think the older grandkids and maybe one or two of the sons/sons-in-law might be interested in things once they are going.  Just not "into" helping me get them started.

I have a question for you (or whomever would like to answer it).  I am an ethical vegan.  Is it possible to do food foresting without animals?  (at least not those intentionally kept)  Can this be done successfully with wild animals, indigenous species, etc?

Terri Matthews
Posts: 529
Location: Eastern Kansas
25
posted 9 years ago
Moni Dew, what is an ethical vegan? Would you be allowed to eat eggs from "pet" chickens, or allowed to use the droppings from a pet rabbit?

I suspect that if you could raise some alfalfa, that the cuttings would make excellent and enriching compost. I would not keep a rabbit just for the poo, though I have heard of a few people who have. I believe that perhaps alfalfa would work as well as rabbit poo, though the micro organisms would have to break it down first!

Lolly K, your land is very beautifull! I also have some land outside of town, but yours is far handsomer!

I got some American Plum trees from the state forestry department for less than $1 each, and they and some daffodils are doing very well! I also got some asparagus roots established, but the yeild is less than what is in my garden: I should have planted it right against the creek. Still, it *IS* tasty!

In my opinion, permaculture is things that work together. The coarse grass keeps my sandy hillside from washing away and produces humus to enrich the soil, the daffodils, asparagus, and plum trees grow well in the grass, I will eat the plums and I do eat the asparagus and sometimes I throw around some fertilizer. All 3 things, (myself, grass, and food plants) take care of each other.
Moni Dew
Posts: 33
Location: Broken Arrow OK USA
posted 9 years ago

Terri McCoy wrote:Moni Dew, what is an ethical vegan?

An ethical vegan is a person for whom the choice to abstain from using/exploiting animals and their products is deeply rooted in their ethics (value system). For me, I have chosen to be non-violent, kind, live in peace with all beings, etc. It would be a violation of my ethical core to exploit an animal or its products for personal gain, entertainment, consumption, etc.