posted 1 year ago
I've been making these cookers for a long time and they work well. The cardboard and aluminum foil can last a few years if taken care of. I've started making them out of Coroplast and Mylar for Tropical regions as cardboard doesn't last the rainy season, this one is going to Kenya. The price to make them does go from about $2 to $20. I use a flat black painted jar and seal it tight for better cooking times. Plans and manuals are available from Solar Cookers International got free. 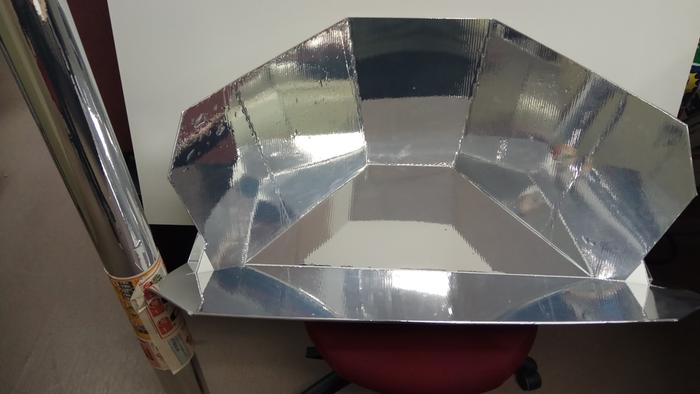 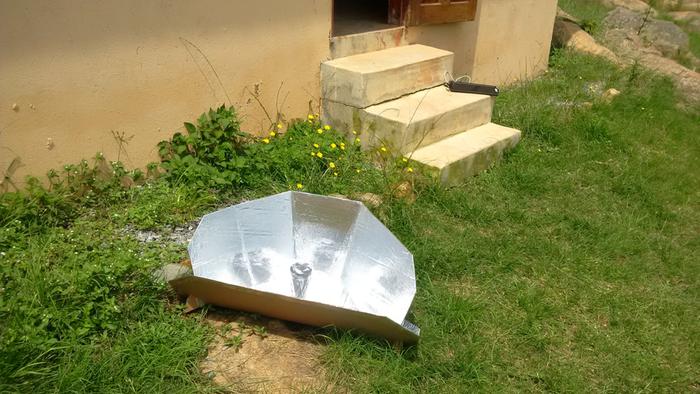 Graham Chiu wrote:What foods are you using this to cook?  Cooking times?

I use 500ml large mouth salsa jars painted flat black. The lid must be tight fitting or the cooking times will increase. I put that inside a large ziplock freezer bag. I blow up the bag so it doesn't touch the sides or jar lid, I've melted a few.

I lead the sun when setting up a solar cooker and adjust every 20 minutes. This can be a pain if you have other things to do and won't work with a parabolic cooker. I plan to build a motorized Lazy Susan for hands off cooking and then will have to adjust my times.

For lunch I'll put in two new potatoes and a raw butcher sausage for an hour.

1 cup of rice with 3/4 cup of water plus seasoning of veg for an hour.

1 cup of pasta and water to cover for 40 minutes, strain and put in your sauce of choice for another 20 minutes.

1 large cut up sweat potato will take about an hour.

You can get a whole package of precooked hotdogs in a jar, cooked in about an hour, longer if frozen.

I'll put three or four eggs in a jar and let them cook for at least an hour and a half. I've had too many soft egg whites this way and now usually boil 6-7 eggs in a pot on a parabolic cooker.

Dried beans I leave out for hours and turn the cooker when I remember, often I've had to cook them again on a stove because they are forgotten. I need spend some time to figure the timing out with beans.

Any veg with an inch of water in the jar turn out great, you really don't need much water. I've used ceramic coated metal camping mugs, with aluminum foil to seal, to cook a personal serving of diced peppers or cooked onions for toppings.

I've tried to do Chinese pork or veg dumplings in a jar but they just stick together.

I do most of my solar cooking in Southern Ontario 44° using them for late morning espresso, lunch, snacks or an early dinner. I bake in a box cooker and grill and make espresso on a parabolic.

Panel cookers are great to reheat leftovers too. You have to be careful not to overload a solar cooker you can get two jars in one panel cooker but have to adjust more often to track the sun. Cooking can also take longer in the afternoon if you start after 2pm. A little more info than you asked for! I really like the taste of Solar cooked food, you have to use less water and be patient for good results.
Graham Chiu
pollinator
Posts: 604
Location: Wellington, New Zealand
13
posted 1 year ago


Perhaps you could use this?
James Sullivan
Posts: 39
Location: Ontario
5
I like...

Graham Chiu wrote:
Perhaps you could use this?

Thanks Graham. Very cool, mine is a little simpler and also taken from someone else. I have two small 6v solar panels, a hobby motor, and lazy Susan(sorry Susan). I plan to connect the panels electrical opposite and perpendicular to each other and at 45 degrees to the sun, the motor should follow the sun and easily turn the light load of the panel cooker. Very crude but sould be fine (famous last words). On the Solar Cookers International site there are plans for a base mounted oven with tracker. I hope to build that once I have a good spot to put it.