Posts: 36
posted 9 years ago
Welcome to the saprophyte (decomposer fungi species) portion of my journey incorporating edible and medicinal fungi into the construction of an agroforest.  Primary aims of this portion of the project are:

• To supercharge the decomposition of mulch,  check logs and hugel beds to rapidly build soil and decompose nutrients.  No off farm nutrition is being used in the project, the entirety of the forest garden nutrition will be derived from decomposed mulch,  dynamic accumulator and nitrogen fixing plants.  All of the mulch is derived from waste products originating on the property, primarily small chipped trees from thinning.

• Year round self sufficiency of edible mushrooms with minimal work and self sustaining in that no further spawn needs to be purchased after initial establishment.  To ensure this is sustainable from a genetic  perspective  minimum three strains of each species will be introduced in close proximity.  To minimize workload bottlenecks and supply continuously overlapping harvests multiple strains are used and multiple wood species within each strain.

Other than shiitake I will be sticking to species that are native to our area (or very close) and fairly mainstream as far as edibility goes;  shiitake, oyster, maitake, lion’s man, King Stropharia, turkey tail, reishi,  shaggy manes, shaggy parasols and morels.
In my view saprophytic  fungi are also a highly neglected aspect of agricultural systems from their role in plant protection.  Aside from protecting plants from parasitic fungi (ones that kill trees) via exclusion some species actively kill virus’s, nematodes, insects, etc.  Pretty much whatever a chemical pesticide does fungi do better and do it proactively.

A few parts of the project:
Logs (shiitake, oyster, lion’s mane, turkey tail, reishi), the shiitake will be cultivated via traditional log culture however the others will be incorporated into various aspects of the garden as check logs, hugel beds and log stacks which fresh logs can be added ever few years to keep the colony going.
A few of the logs laying up off the ground out of reach other fungi species in the incubation area… 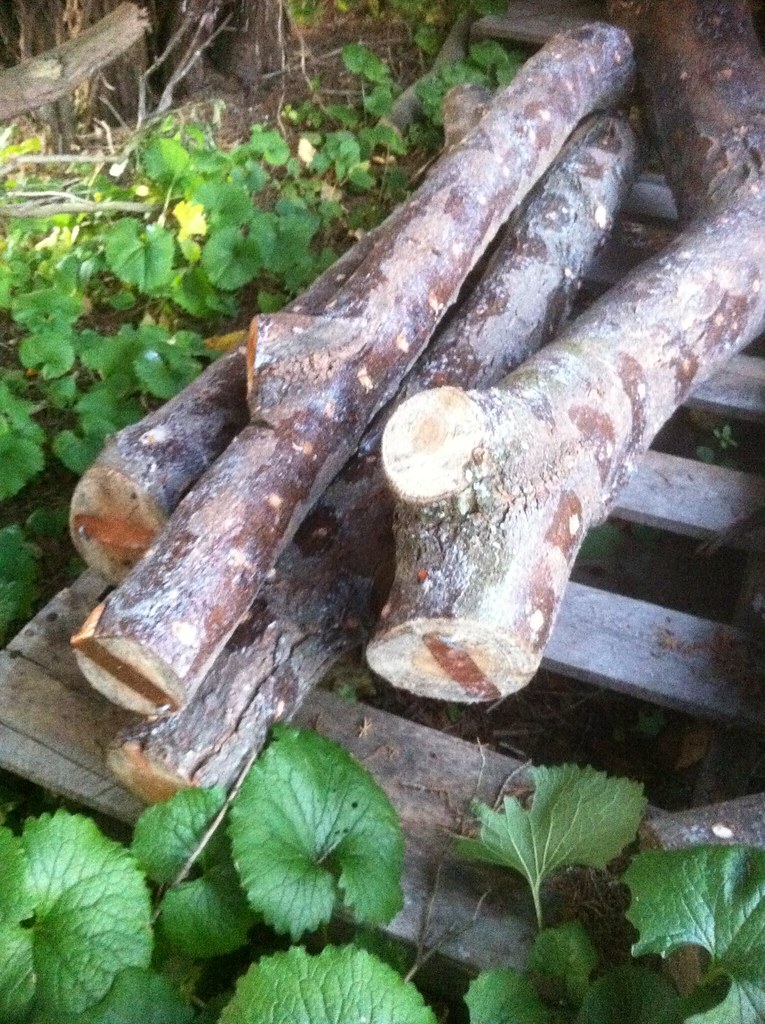 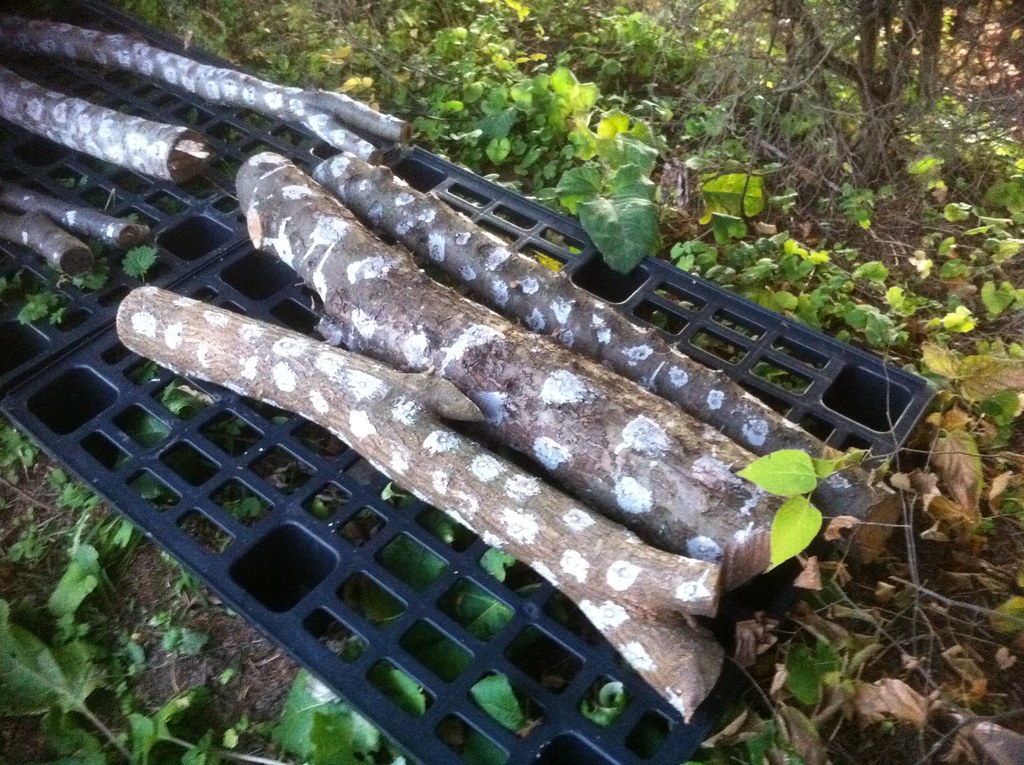 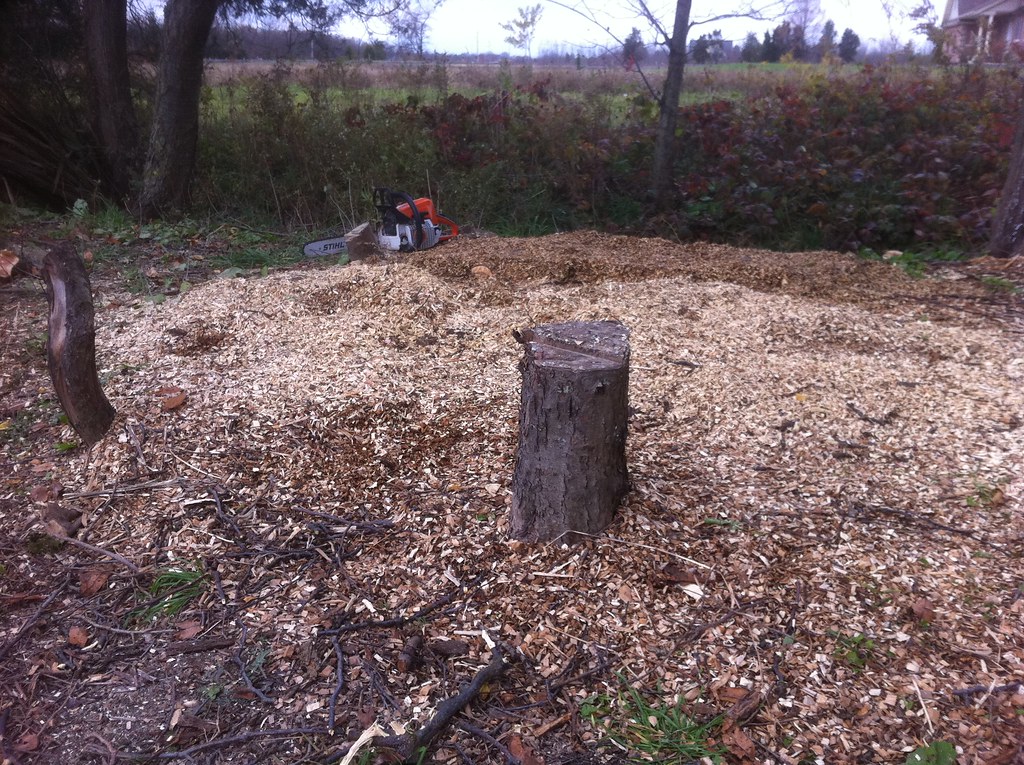 Area excavated about 4” deep and covered with soaked cardboard with the top ply torn off the upper face.  Mycelium travels quickly on the torn face of cardboard hopefully forming a quick barrier to other fungi trying to enter.  Sawdust spawn is sprinkled evenly then lightly sprinkled with fresh honey locust and birch sawdust.
Fresh honey locust wood chips are soaked in non chlorinated water quickly and then laid about 3” deep and mixed with spawn at about 20% ratio.
Bottom and sides of honeylocust and birch logs scored with chainsaw then laid scored side down into the bed. 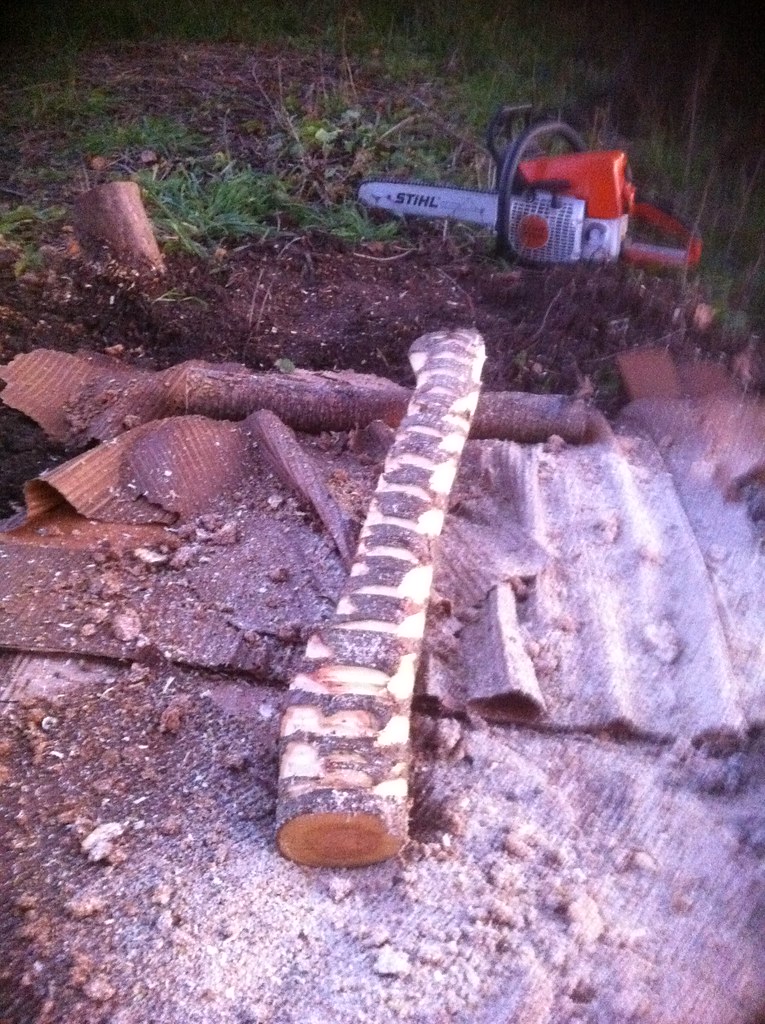 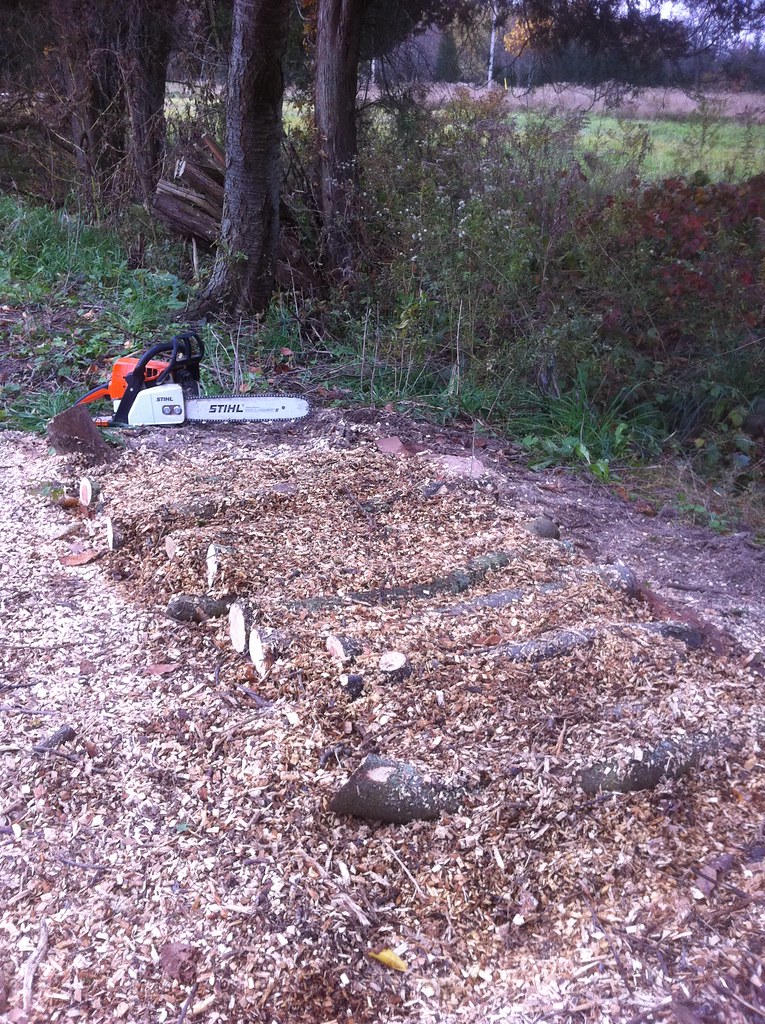 Stump (in foreground of first pic) inoculation from below with inoculated oak branches, top of stump was innoculated with spawn dowels .. 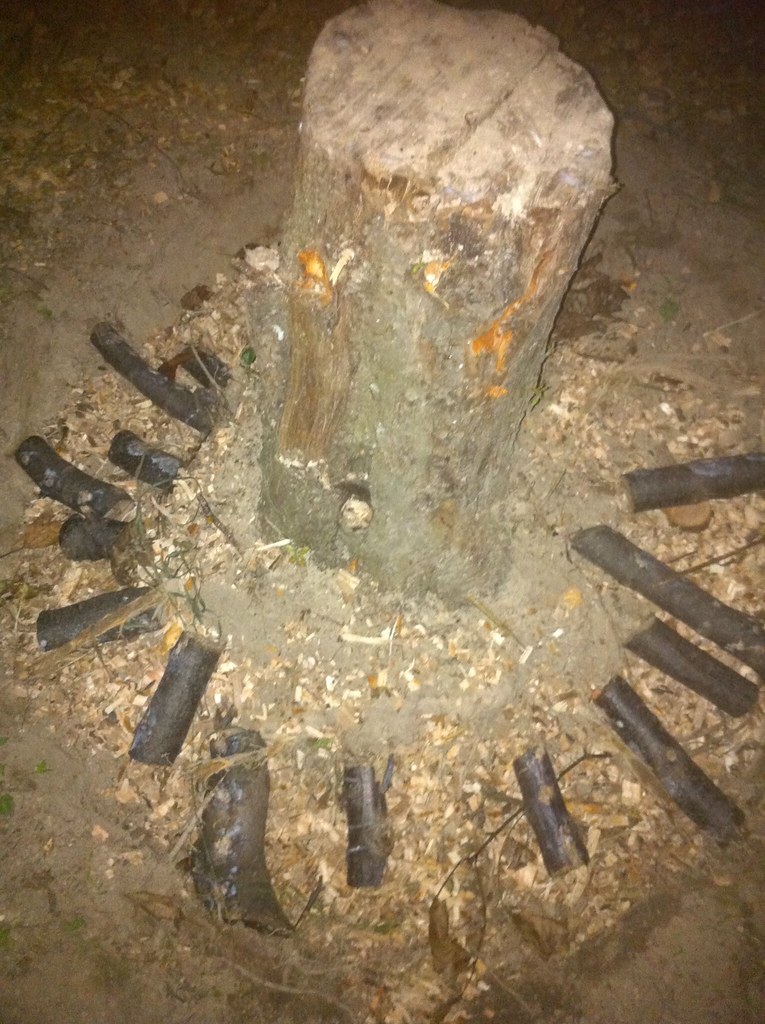 Wood chip bed – This will be the entranceway to the forest garden in the spring it will be inoculated with King Stropharia, Morel and shaggy mane and used as a mother bed  which with luck will spread into the forest garden  via wood chip paths developing satellite colonies in the niches that suit them.
Wood Chip bed (primarily a mix of mulberry, cherry, birch, apple and soapberry) 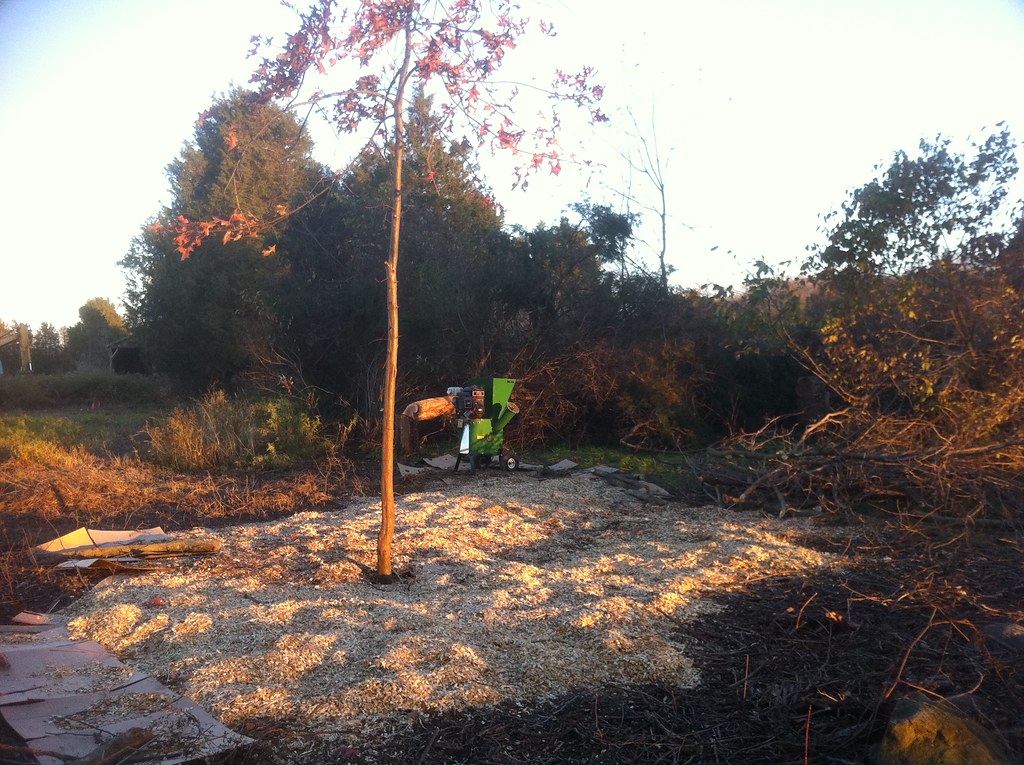 KingStrophariaBed by pv_agroforest, on Flickr
Posts: 36
posted 9 years ago
And finally some actual mushrooms..  a few resident Shaggy Parasols: 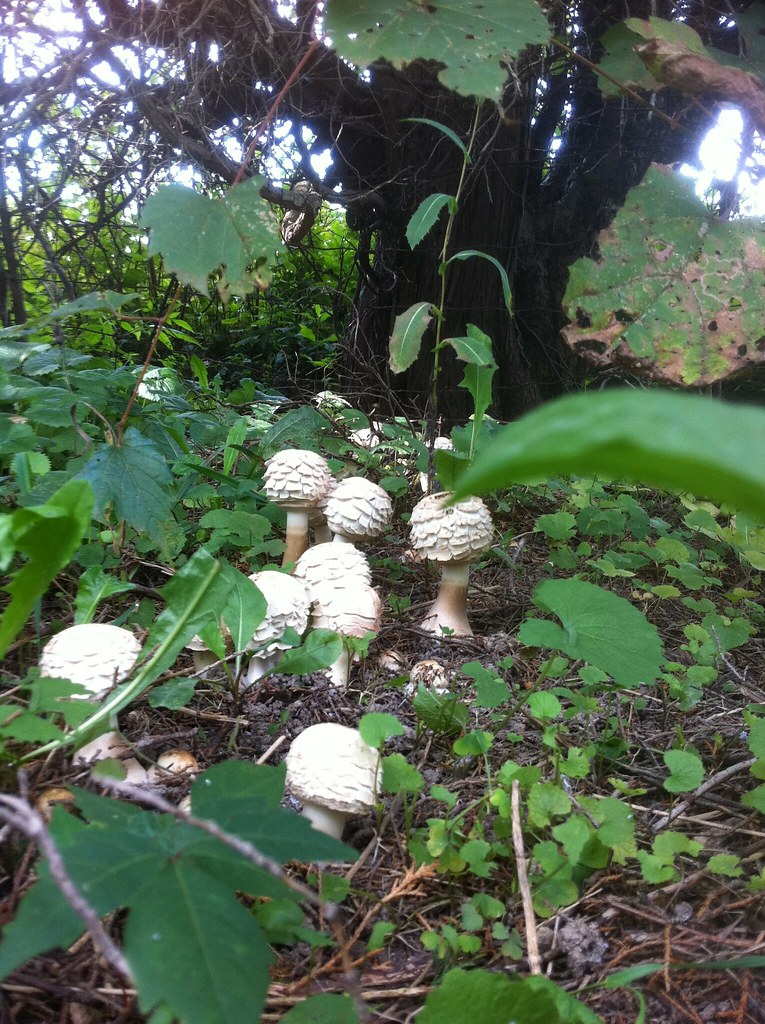 Any updates you can give as time goes on will be greatly appreciated.

I've been working on inoculating cut logs and stumps with plugs colonized with mycelium from the culinary and medicinal species available from Fungi Perfecti.  Have to wait until spring at least to see how they survive.

I am also inclined to find ways to encourage the growth of these (and other such as you mentioned) species to "naturalize" in our fledgling food forest and surrounding woods.

The plug/cut log method has been used for many years and is likely to be reliable in our area, but i'd like to find a way to work with inoculating whole logs that then become the foundation of hugelkultur beds.

My initial thoughts are to grow out the mycelium in pre-soaked straw bales and use this to cover logs that have been dropped and placed on contour where the new hugelkultur bed is desired.  With a thick straw covering in spring or fall, it should be easy to maintain good growing conditions for the mycelium.  Additional topsoil and the plant layers of the food forest could be planted around these log swales.

I'll try it this spring.

>>> K.B.  I too am giving some thought  on how to integrate  fungi into hugel,  the two biggest potential obstacles are high amounts of competitor fungi and that that the soil will acta as a "casing layer" which most primary wood decomposers are not accustomed to.  Maitake would likely be the best bet imo as it coexists well with other fungi and naturally emerges through a soil layer much of the time.  Likely many others can also, I am going to try it but place higher hopes on stacks of uncovered logs.
Kay Bee
Posts: 471
Location: Jackson County, OR (Zone 7)
1
posted 9 years ago
Once again, great photos and details on your projects.  Very interesting and I am very eager to hear any updates as time goes on.

Would you be willing to share your general region and the climate type that you are growing in (sorry if I missed it)?

I agree that a deep casing layer of topsoil may inhibit the fruiting of a number of the edible and culinary species.  In the hugelkultur beds that I installed this past spring (see the main hugelkultur thread for pictures and details), I was probably not as fastidious as some in fully covering all the logs and especially stumps that went into the foundation of the beds.  This probably caused more loss of moisture than if I had fully covered all the woody material, but I don't think it caused any signficant problems.

I think for the mushroom hugelkulture (mycokultur?) beds, I would initially have the logs fully covered by the straw (and topsoil?)  for 1-6 months, then reopen sections of the bed to encourage fruiting.  Depending on the size and length of the logs, perhaps openings could be every 10' and both ends of the bed?


In my climate, drip irrigation would likely be necessary to encourage rapid colonization of the logs and subsequent fruiting.  To take advantage of the irrigation and to provide shade over time, I'm thinking of planting gooseberries/jostaberries, grapes and mulberries in these swales as the backbone of the initial guilds.

Pacific madrone is one of the common trees on our property that is a hardwood and coppices aggresively when cut.  The bark is too thin to be a good above ground substrate for fungi, but I am hoping that it will work well in an underground setting.  Our local Oregon white oaks should also work well for this purpose.

K.B. wrote:
Would you be willing to share your general region and the climate type that you are growing in (sorry if I missed it)?

I never remember my zone but I am as far south as you can go in Canada, about an hour from Detroit.

Kay Bee
Posts: 471
Location: Jackson County, OR (Zone 7)
1
posted 9 years ago
Thanks - I would guess zone 6 or 5 depending on local conditions.  I grew up in the mid-Michigan area.  I would think that you are in an excellent area establshing mushrooms in the forest garden.

M.K. Dorje
Posts: 153
Location: Orgyen
1
posted 9 years ago
This is an interesting thread for me as well, as I have been growing mushrooms in Oregon for over 20 years. I've had good luck with the log-and-raft method with reishi, but not with maitake. I also have had excellent results growing oysters and shiitake on above-ground logs. I've never been able to get sulfur shelf (conifer strain) to fruit on Doug-fir stumps and logs, though. But it will be interesting to see what happens with all of your projects- I wish you all the best of success! Be sure to order a paper catalog from Field and Forest Products from Wisconsin (fieldforest.net), as they sell high-quality spawn and their catalog has lots of info on growing mushrooms not found on their online catalog. They also give good advice to beginners over the phone.
Posts: 36
posted 9 years ago
plm,

For outdoor culture field and forest definately has a great selection, I haven't seen the paper catalogue but received a really good info pamphlet specific to each species I ordered.

Hopefully Maitake is easier to establish here in the east where it is more common in the wild.  If I can get ahold of a fresh maitake fruiting body next year I plan to blend it into a spore/mycelial slurry and dose the entire bed with it for good measure.  I don't mind putting a fair amount of time and expense into this bed as I bet it produces for a very long time with minimal maintenance once it catches.

If you have any pics of your logs/beds don't hesitate to add them, would be great to see them.

Posts: 36
posted 9 years ago
My favourite model modelling my new favourite saprophyte.. lion's mane fruiting on 5lb of sawdust spawn I took too long to use. This was the second flush, no humidity tent or anything just left open on the kitchen counter. 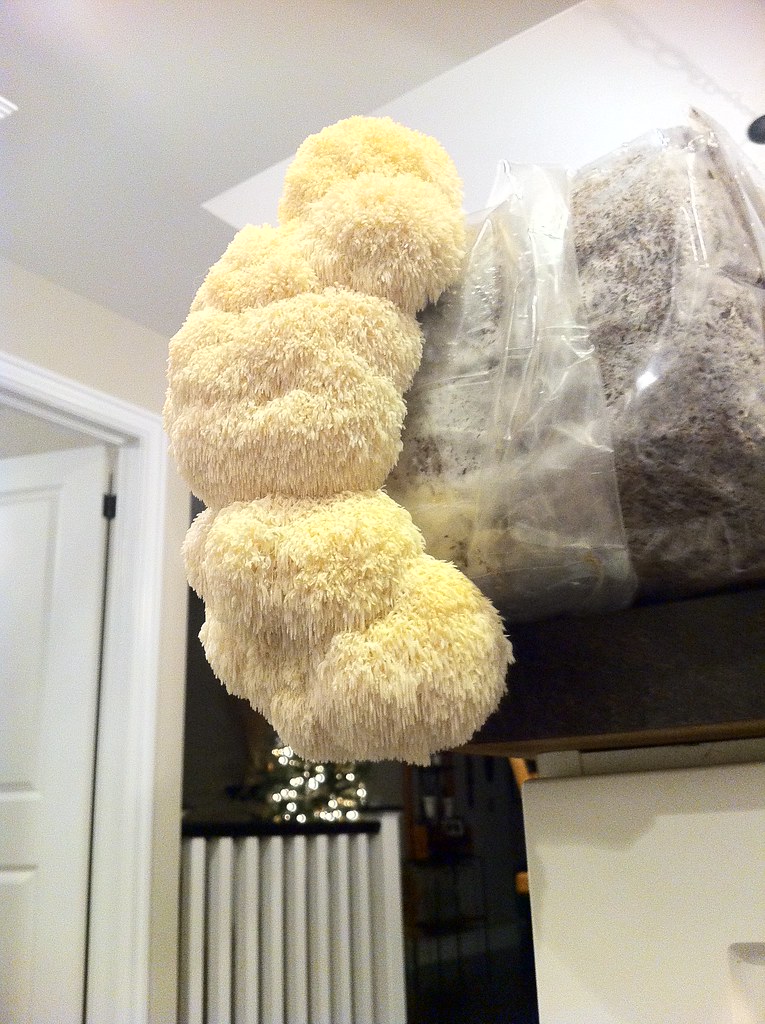 lion's mane 2 by pv_agroforest, on Flickr
Abe Connally
Posts: 1502
Location: Chihuahua Desert
posted 9 years ago
I am looking for turkey tail spawn or cultures. Do you have any? Where did you buy yours?

Kay Bee
Posts: 471
Location: Jackson County, OR (Zone 7)
1
posted 9 years ago
I got my turkey tail spawn from fungiperfecti.com. Looks like they are still listed on the plug spawn section of their site:
http://fungiperfecti.com/plugs/plugs.html

Abe Connally
Posts: 1502
Location: Chihuahua Desert
posted 9 years ago
yeah, I am looking for cultures or grain spawn, but I might have to settle for plugs.

Abe Connally wrote:yeah, I am looking for cultures or grain spawn, but I might have to settle for plugs.


fyi... if I recall correctly, most if not all, of the bags of plugs I received from fungiperfecti appeared to have been inoculated from grain spawn. I don't think you'd have any trouble re-culturing the plugs on over to grain again.