posted 2 years ago
It is so hot here that yes I let the vines obscure the deck in summer this is late fall.

I put the system in 20 years ago, originally just the 2 rows of panels.  They are Astropower 110 or 120 W panel label and there are 24 of them to get an actual 2kW at the inverter. They are wired to get 48v.
J
The inverter is a Trace 4048 which means 4kW ( in 2 2kW inputs) at 48v.  So I was utilizing half of the inverters capacity.  There is a standard old fashioned Trace charge controller on that string. This was manufactured in California at that time and maybe that is why it is still alive.  This was a very top of the line inverter and 20 years later I don't think there are any features that it can't do. We had a phase for a while where there were just dumb inverters that people were being sold which now require them to buy expensive add ons.  Anyway, it is grid intertie, it has battery back up and must have at least a bit of batteries there, you can tell it to sell or not to sell, you  can tell it when to sell and when to charge the batteries, etc... they use new words like islanding but this is all not new as this one was made to do it 20 years ago.

I used to have some Trojan deep cycle batteries but bought Aquions 2 years ago.  They work great and were easy to connect to my ancient system. You can see that they are about the same height as the workbench to the left of them and they are in the same footprint and location as the previous battery box.  If I ever get around to it I will attach a piece of plywood to the Aquion's bolts on top and have a table top there so the height is it better than previous battery box.

About 10 years ago when I reroofed a friend gave me 3 additional panels, they are Evergreen 210 or 220's so twice the wattage per panel. I bought an Outback charge controller for them and so have this small 600W string going into the other input of the inverter.

My goal was always to make all the electricity we use, and this is an all electric house.  We accomplished this on a 2kW system by getting rid of 3 large temperature changing loads.  We turned off thecelctric heat and heat with wood; we took out and sold 3 window air conditioner units that came with the house ( and built a trellis with grapes and put in a few northern operable skylights, good habits, etc...); we installed a solar hot water heater.  The well pump was replaced with a lower power unit ( they tend to oversize these) and the ancient refrigerator that came with the house replaced with an energy star.  And last, all the little things and habits: power strips to turn off entertainment and office stuff ( gets rid of phantom loads), and yes lightbulbs but mostly was good habits ( turn off the lights when not in the room, shower at night when the water is hot from the sun not the morning, laptops not desktops,
etc...)

We get frequent power outages in this area during winter storms from a day to 4 days long.  I have plenty of power in my couple batteries to use electric appliances  like toaster and electric kettle, laptops, lights Internet refrigerator and water pumping if needed.  It is seamless and quiet. I usually do not even know that the grid power is down until I comes across one of the areas that is not on backup power or a friend from down the street calls me to ask about it.  The whole rest of the area is now horrid with their noisy generators which makes it unpleasant to go outside.


So 2kW system with no propane or other gas.  Later I added a water tank and a pressure pump and the children got older and we started going over budget, but this was solved by adding the additional panels.  So it is 2.6kW but likely some degradation of the old panels so I don't know 2.5kW or a bit less. The last couple years my solar hot water is off line( leaking panel ) and I have a renter in the studio.  Even so, the studio is submetered so subtracting his kWh I was overall even.

Just showing that households do not need a large or expensive electric system, and we even used a dishwasher for years when a larger household.

What I would do different is have a direct DC well pump with its own panel to pump when the sun shines.  Water pumping is a large load for us in CA with a garden.  When that pump goes out ( not soon !) if I at all can, I will do this, then the rental will be solar and also it will be more cost effective irrigation 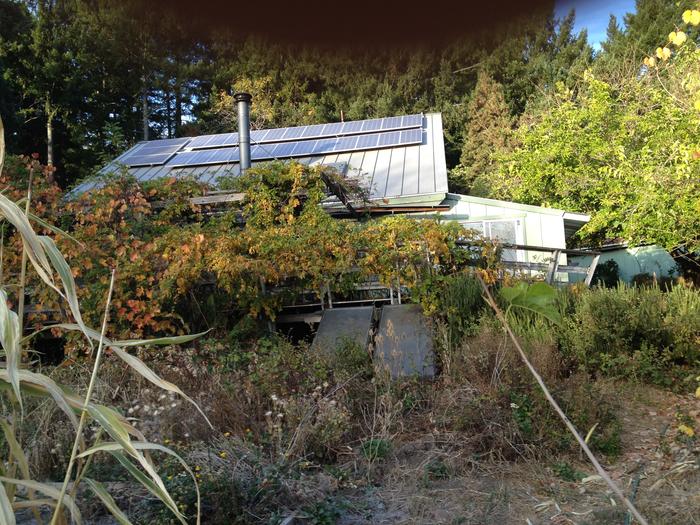 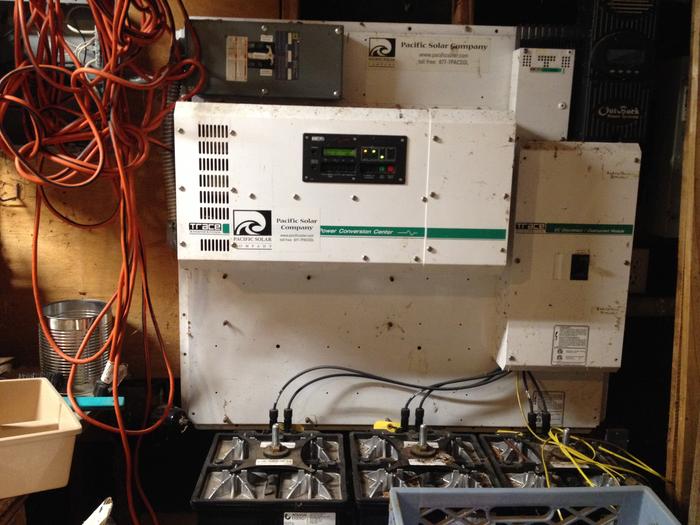 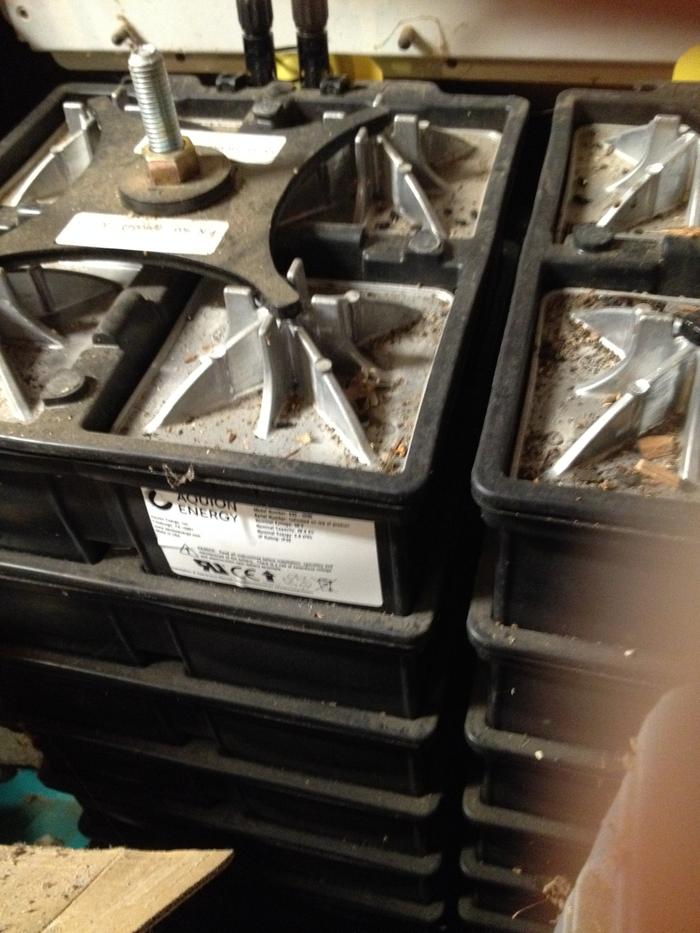 posted 2 years ago
Very nice setup Debi. That Trace is a rock solid inverter. In California I wouldn't even bother changing the trace pwm charge controller. In my northern clime the mppt chargers made solar much more viable. Do you have a softstart feature on your pump? Grundfos makes a great ac softstart pump that will do away with that great startup dimming while keeping your costs down by staying ac. Here is Grundfos' video talking about the difference and an install...

David Baillie wrote:Very nice setup Debi. That Trace is a rock solid inverter. In California I wouldn't even bother changing the trace pwm charge controller. In my northern clime the mppt chargers made solar much more viable. Do you have a softstart feature on your pump? Grundfos makes a great ac softstart pump that will do away with that great startup dimming while keeping your costs down by staying ac. Here is Grundfos' video talking about the difference and an install...

Thanks!  I think it is good to note that a 2kW or 2.5kW system is not expensive and it is a lot of power realy.

I have a nice Grundfos pump, the same as in your link but mine is 120V ( not 240v so I can run it off batteries when I want to or need to)  But, I can tell you that their dry pumping protection does not work, major disappointment for my well where by the beginning of fall we can pump out faster tha the recharge rate, at least in bad back to back drought years.  I threw a 24 hour dip switch timer to that well pump so that it gets power, right now I can change it, 15 minutes out of every hour during off peak night hours.

So besides letting it just pump slow in daylight, I would just do straight sun to pump, pump when the sun is out nothing fancy,  going DC on the well pump (I also have a Grundfos pressure pump) at some future date if/when the pump dies would just be a very cost effective way to have more electric,  their realy isn't enough viable roof space on the main house to bother and the cob rental studio is also almost all electric.  But it uses so little, no reason  to replace working equipment ( he is submetered and pays for his power and it is not battery backed up)

The charge controller I have on the small string is a mppt one.  But, yeah, no reason to change out that old c40 made in CA one for a new item that may not last

posted 2 years ago
The pressure pump we added when we got the water tank is the Grundfos MQ3 likely the MQ3-35 I would rather less pressure for less power but the market wants more and not less like me.  So default right now when the grid power is down is that this pressure pump is on battery back up and the well pump is not, this is all simple to change if I needed the well pump,  but unless we are having a fire emergency I don't realy need decent water pressure either so I may turn this off when in power down mode