posted 1 year ago
I've recently come across the concept of "Grape Girdling", which is apparently a common grape growing practice that increases table grape size and quality.  I'm interested in the groups thoughts on this practice, and in general the process of producing good quality table grapes.


Trunk girdling is the removal of a thin strip of bark all the way around the trunk. It is done each year on an area of the trunk or cordons that was not girdled in previous years. The practice temporarily disrupts the downward flow of carbohydrates and hormones through the phloem (inner bark) and, when timed properly, increases the berry size of most seedless table grape varieties. It can make berries about 10 to 30 percent larger when done correctly.


The practice of girdling removes the bark, phloem and cambium from around the trunk or cane...Removal of these tissues prevents the translocation of carbohydrates to the root system thus making more available for fruit growth until the girdle heals.... 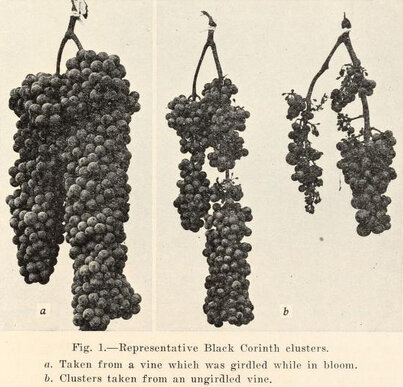 I've searched the forums and not found anything on this topic, so I wanted to open discussion on it.

Does anyone here do this, and have positive or negative results?
What would keep you from doing this, given its potential benefits?
Does anyone here have experience producing large quality grapes without this method, and if so what do you think contributes to this success?

More about my situation, for any other suggestions/feedback:

I'm on year 2 of my own grape growing education and learning a lot.

I have about 30 clusters per vine, even after thinning over 75% of the clusters, on my Concord and Catawba vines.  They are quite vigorous.

I've had less luck on my Marquis due to puppy bite, and on my Reliance due to the original nursery tag constricting the main vine and going unnoticed until a few weeks ago.  I'm expecting next year they will all be very well established.

Perhaps I should have thinned more or all of the grapes being only their 2nd year, but I'm not that disciplined.

I have a good bilateral cordon system going, and the plants seem healthy.

My Concords are starting to ripen and I expect I may begin to harvest .  They're small compared to the grapes we buy in the store.

In general, my goals are simply to feed my household of 8 with as much as I can from my urban backyard.

posted 1 year ago
Sometimes, fruit thinning is important for the health of the plant or for other reason (there was a thread on this but I can't find it at the moment)

Oftentimes the overall weight of the crop is the same though, because without thinning you have more fruits, but they're smaller. Though girdling the grape would possibly increase the overall yield

Personally I wouldn't girdle the grape vine. While grapes are tenacious, wonderful plants and could probably take it, it could open them up to infection, especially if the fall is wet where you are. I personally also think it's unkind to unnecessarily stress out plants. I understand why people do what they do, but I just don't want to. I understand wanting to grow as much as you can on your lot, but I can almost guarantee you that at some point the vines will produce more than you can use regardless of your practices, unless you're really on top of your preservation gain.

If you're limited on space and fill everything up you might think about starting a community food producing space, like at a church or library. More and more they are open to it, at least where I live, especially if you will help organize it

posted 1 year ago
General rather than grape-specific girdling comment: My understanding when girdling is to not completely circle the trunk but to leave part of the bark intact so that water may still move upwards. When animals completely girdle a tree, a common result is death of the tree.

posted 1 year ago
I am not familiar with this practice but I am certain it isn't a complete girdle that is done, complete girdling results in death of any growth above the girdle.
I would be truly surprised to find out the growers are intentionally subjecting their vines to such abuse but I don't grow table grapes I grow wine grapes since they are sweeter and can be used for table grapes if desired.
I have enough money tied up in my vines that there is no way I would subject them to girdling.

I will see if I can get one of the Prost brothers to get me up to speed on this technique, but since the original post specifies "seedless table grapes" there is the possibility that it might work for those cultivars.

My personal feeling about it is that it is an incomplete girdle with at least one connection remaining so the vine above the cut doesn't die, but it still seems like a lot of stress for a valuable vine to be made to endure.

I'll come back with what the Prost Brothers tell me.

posted 1 year ago
About 1745, Col. Buchott, of Metz, in France, invented, or claimed to have invented, the plan of girdling, or, as the French call it, the annular incision of the vine.
For this, he was awarded a premium by the Agricultural Society Of France.
It was claimed that the invention would be of great value in hastening the maturing of the grape, as well as improving the quality.
The latter point has been one in dispute among grape-growers from that time down to the present.

Thiebaut de Bernaud, in his Manual on the Vine, which was published in New York in 1829, says, "Girdling is a means of forcing the ripening of the grape, and increasing its size and quality.
By the oldest records we have, it appears that it is a process that has been long and well known, and was used to prevent the blighting of the vine.
All writers on agriculture, from Theophrastes and Pliny down to Julius Hygin, speak of it in the most unequivocal terms as a practice in use among all the gardeners and vinedressers of their time".

Wm.R. Prince, in his Treatise on the vine in 1830, makes similar remarks when speaking of this subject.
The Agricultural Society Of France, which awarded Buchott a premium for his invention, was composed of men who had read the Agricultural and Horticultural writings of the ancients; and, without doubt, knew what they contained in relation to the vine.
This seems to preclude the idea that it was an old and well-known practice in the days of Pliny, Theophrastes, Columella, and other writers of their time, as has been claimed.
Strabo speaks of girdling layers of the vine before burying them, as it compelled them to form roots more abundantly than if buried without.
This is well known at the present time; but it had no reference to the fruit, as is claimed by the authors referred to.
Torsion, or bending of the shoots, is much practised in France upon fruit-trees, as well as upon the vine; and it produces similar results, by hastening the maturing of the fruit, without being so injurious to the plant.
This operation was well known to the ancients.

Du Breul, in the Revue Horticole, p. 86,1857, says in relation to the subject, that "Lancry, in 1776, exhibited to the Society Of Paris a branch of plums on which the operation had been performed, by which the size of the fruit had been very much increased; so much so, that the success of the operation was fully proved".
When speaking of girdling the pear, he says there have been many reasons given why it increases the size of the fruit, but none were satisfactory.
M. Bourgeoise, in the Revue Horticole of May, 1858, says, "Last season, I had the honor of presenting the Society Of Agriculture of Paris some brauches of the vine upon which had been performed the 'annular incision,' by which operation the ripening of the grapes had been hastened fifteen days, and at the same time the berries were much larger and more beautiful".

So apparently this has been a common practice for several centuries at the least.

I have some muscadines I will give it a trial on next year, I am not going to experiment with my wine grape vines.

posted 1 year ago
This practise occurs in books, but I did not try it sofar.  You must girdle only bark and floem of the shoot with the cluster (under the cluster of course..). You remove it circularly and completely, removing stripe 3-5 milimeters wide.. Thus you stop a flow of sugars from leaves above the girdle into the trunk and roots, so the sugar accumulates in the berries.. The flow of water and minerals from roots into the shoot is not interrupted, because it flow through the wood capilares.. You must not girdle all the shoots of the vine, because some sugars must flow down to the roots as a reserve for winter and spring.. I had an accident last year - a goose stripped a bark and floem from a trunk of one vine. Completely, circularly.. The clusters riped normaly, just like others. I cut the trunk this spring and suprisingly new shoot sprouted from a base of the stump.. So it did survive the winter..