Zoom down and have a look at the pictures before you read anything.

My wife sent me these pictures last night. I had sent her on a mission to learn as much as she can about tropical permaculture, since we are shopping for land in the Philippines.
.........
The trunks laying down like a log, are pretty straightforward.

Holes are drilled and compost is placed and planted. It's a great way to avoid watering and to contain nutrients. It's going to be tough for weeds to compete. As the stem breaks down, it will feed the plants. It's probably possible to put some really rich stuff like chicken manure, into the hole and then water it heavily, so that it migrates throughout the stem. Then place regular compost and plant. There would be a nutrient reserve and of course, a water reserve. But you've seen the pictures. It seems self-evident.

The standing ones are a different story. Some things live parasitically off of the banana. It can also be done where compost is placed in the holes.

It seems like a good place for starting orchids and other things that just want a nice damp place up in the air.

I'll bet that most creepy crawlies who climb up a banana stem, are hoping to eat bananas, not lettuce or onions or whatever else we planted those holes. So it might be a good way to trick pest species.

Lots of people would prefer to work standing, instead of hunched over. You plant the standing stems and let the kids deal with the ones on the ground. That's where the cobras live.
...........
Sometimes the living ones hold bananas that still need to be harvested, while other times they have been harvested, so it's okay to farm the trunk to death unill it rots away or falls.
.........
Normally, banana waste is laid around the remaining trunks, as mulch and to give them nutrients. This practice does not take away from that, if it's done in the field, because compost and other additives will make the resultant material even richer, when the stem breaks down.

Banana circles are already a very efficient system, since they are basically a giant compost pile with a banana overstory and then other things growing beneath.

It can be difficult to cultivate lettuce in the tropical sun. The inside of a banana circle is pretty shady. I could see laying a few trunks in there, to grow lettuce.

Things that need more sun can be planted around the perimeter of the banana circle.

I'm going to try every version of this that I can think of. I think I'd want to do it parasitically, only after the bananas are well on their way and about to be harvested. Then instead of cutting the stock down, which is standard practice, I would leave it up and see how much production it will give without dying.

I'd like to try the same thing, with all of the leaves lopped off , so that it's just a standing stem, that may continue wicking water and living for quite a while. This would prevent the harvested banana from competing for light with the next crop of bananas.

Another version would be to lop it off at about 6 feet high and leave only that part standing. That's about the right height to make the cut when bananas are harvested. One worker cuts the stem while one or two more control the fall, so the fruit doesn't get bruised up. I'm pretty sure this one won't live for long, but maybe long enough, to get a crop of lettuce or onions. The top of the cut could be hollowed out and planted with something. It would look like a little tree.

Stems can also be cut like short pieces of firewood and used like a plant pot. This gives the option of transplanting to the soil, so a great place for a longer lived things. Pieces right down to about 3 in diameter could be useful as starter pots that are planted in the garden , the same as is done with peat pots.

Have you seen this before or tried it yourself?

This is the most interesting way of using waste that I've seen in quite a while. It solves so many problems at once. Watering, nutrient runoff, weeds and maybe bugs.

Nematodes can be a huge problem. If hot compost were made and kept clean, susceptible crops might have a chance.
IMG-20190917-WA0005.jpg 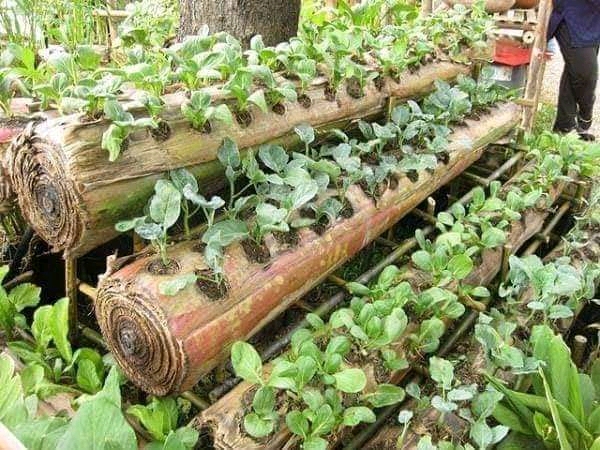 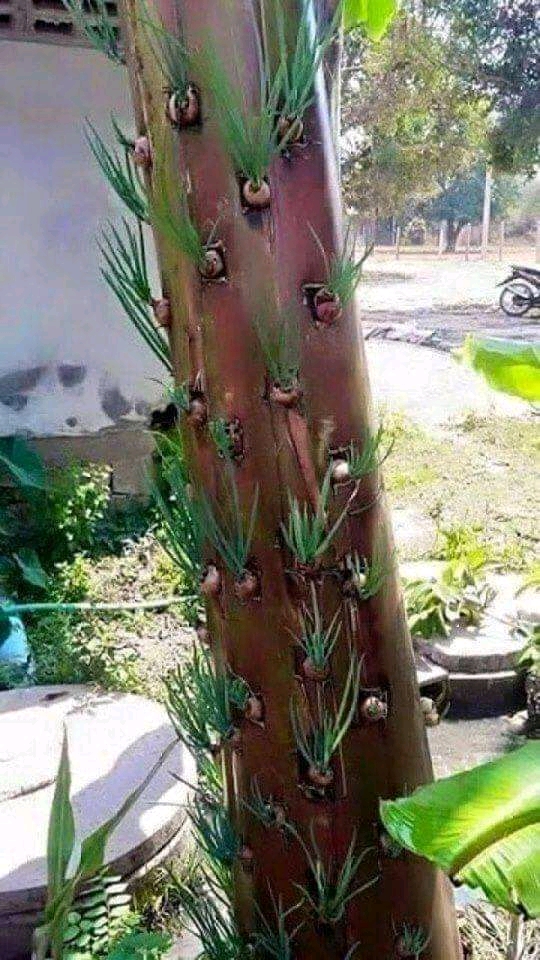 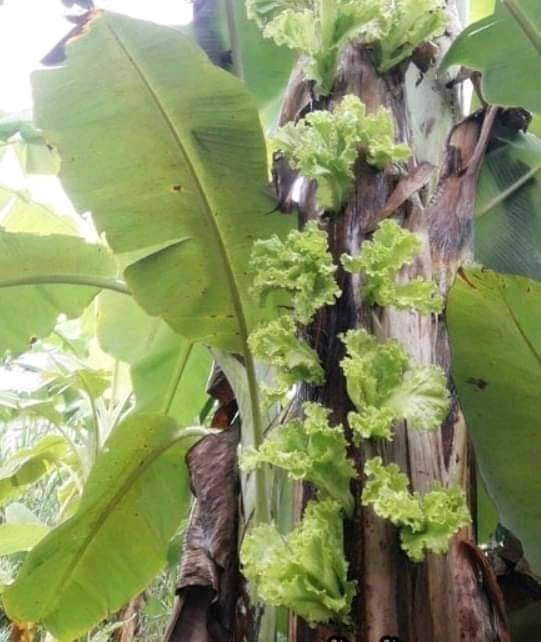 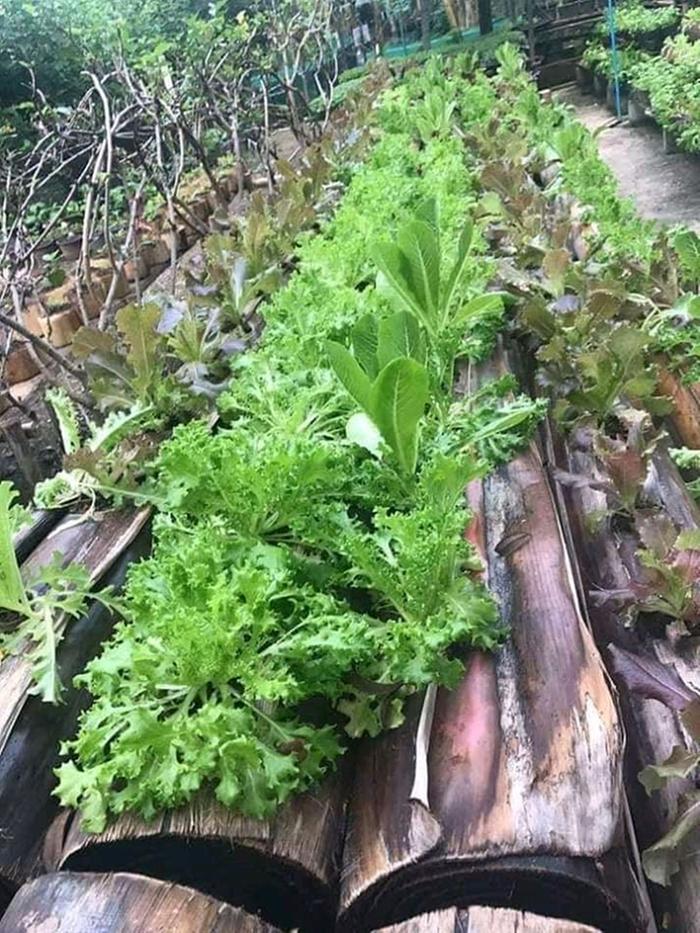 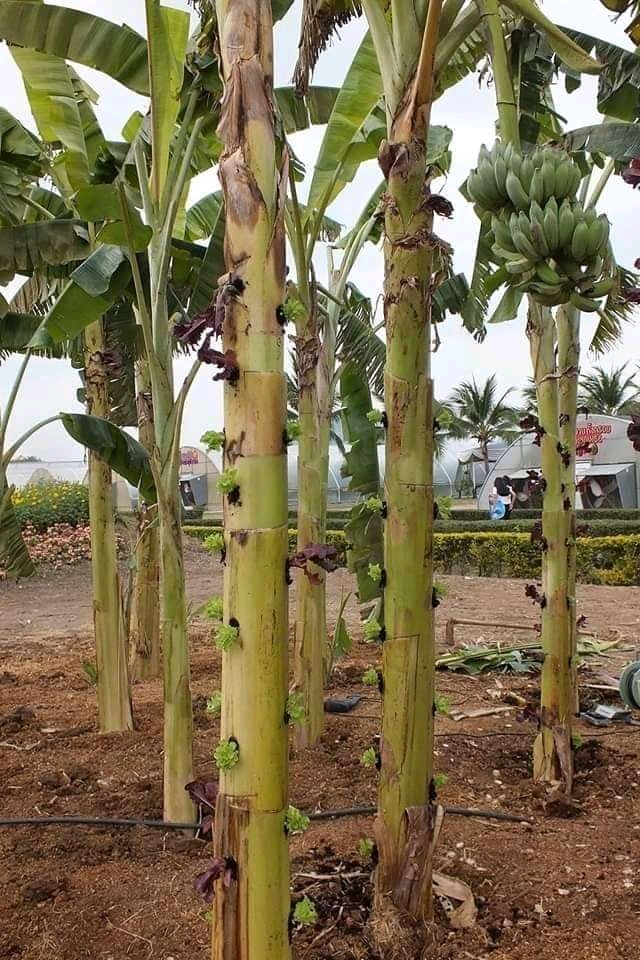 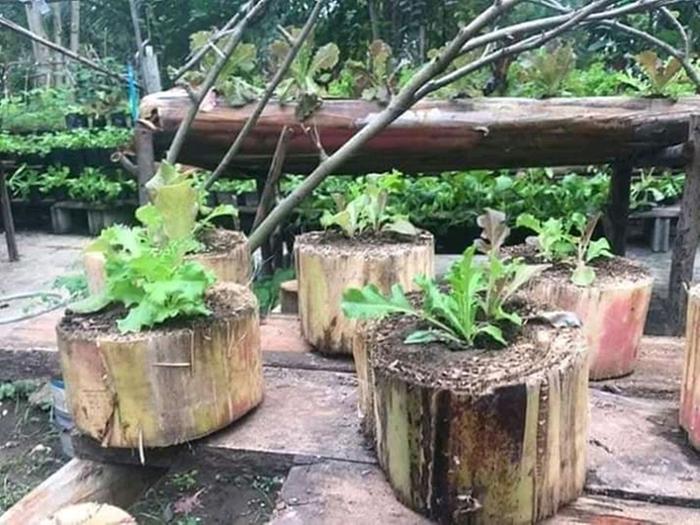 Ben Waimata
pollinator
Posts: 111
Location: New Zealand
22
posted 1 year ago
That's an interesting concept. I would have expected the pseudostems to decay too fast, my banana plants don't seem to last long once dead on the ground. Also once they are cut they seem to break down fast, and I can't imagine they hold masses  of nutrients. Pseudostems are essentially just leaf bases after all.  This may be  one of those things you do only if seriously space-deprived.... but  I'll have a play with this idea, thanks!
Dale Hodgins
Posts: 9002
Location: Victoria British Columbia-Canada
670
posted 1 year ago
Nutrients come from the compost,  in the cut stems.  The onions are living parasitically on the living bananas. Although stems don't store much, bananas are heavy feeders, so a lot of nutrients passing by. One month is long enough for the lettuce to mature.

I think it's more about not having to water,  than space efficiency. And possibly avoiding insects and soil borne organisms. I found quite a few pictures from Indonesia. Lots of people to feed,  and inexpensive labor.
Kebun Dagi
Posts: 4
Location: Bangka Island, Indonesia
posted 1 year ago
Hi Dale,

as Indonesian, I saw some similar pictures in social media but so far has no chances to see it by myself. It is not common practices here. It is merely a creative way of farming to deal with less land ownership (by vertical gardening and poly culture in small scale farming), expensive farm input (planter bags, fertilizers etc compare to the price of the crop).
Chris Kott
pollinator
Posts: 3592
Location: Toronto, Ontario
503
I like...

posted 1 year ago
I love this idea, Dale. I was thinking, too, that if they continued to uptake water even after the harvest, they could be used to grow some crops in land too wet to be productive.

posted 10 months ago
I am intrigued by this idea. We have a lot of bananas on our land here.  I can confirm that our lettuce did not appreciate the hot, dry -season tropical sun. We sort of gave up on it for a bit after that. This sounds like it might be a good way to grow it in a nice semi shady location. I’d love to hear what happens if anyone here tries it!