posted 1 year ago
His youtube channel, Ridgedale Farm, Gracie's Backyard (Ridgedale Farm was the focus this documentary project), Making Small Farms Work - the book, profitable permaculture, online training program, internships and such; many significant works were undertaken by Richard Perkins. I have been following his youtube channel for some time and read his book "Making Small Farms Work". I think his next project "Regenerative Agriculture" which is currently getting crowdfunded, is going to be a must have for many small farmers, permies, homesteaders.

The writing and editing of the book is finished and the project is already funded (480% actually). It is a comprehensive 700 page book going into topics such as keyline design, water systems, agroforesty, tree crops, indoor mushroom cultivation, pigs, broilers, pastured turkeys, layers and egg mobiles, no-dig market micro greens. 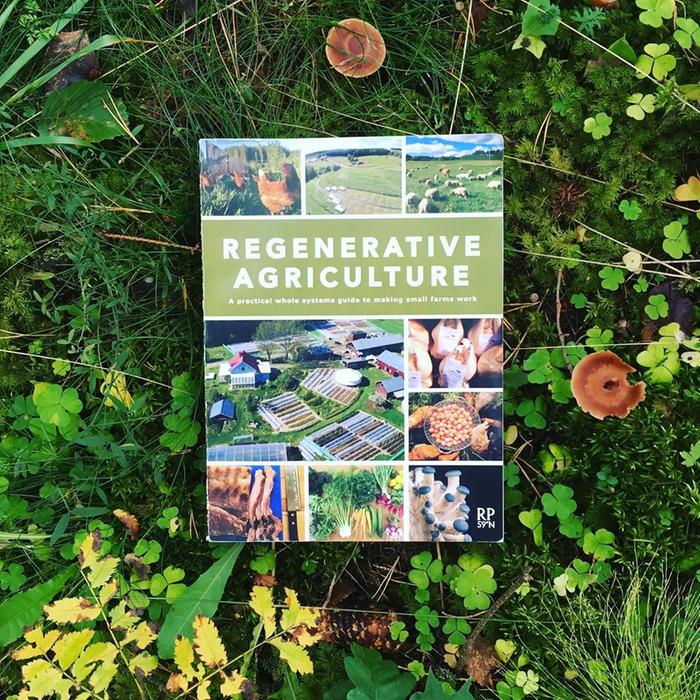 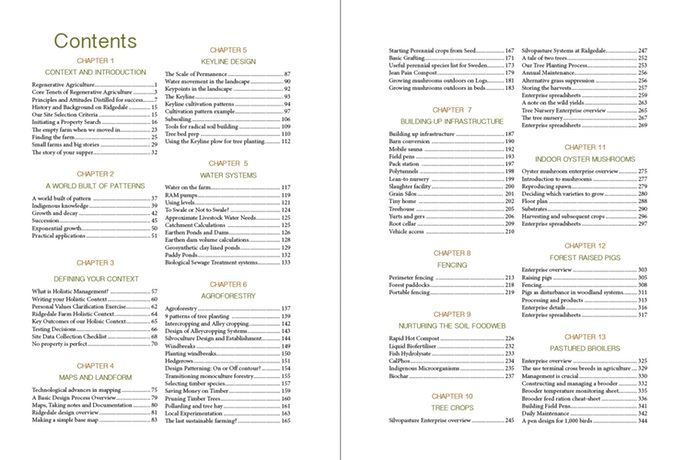 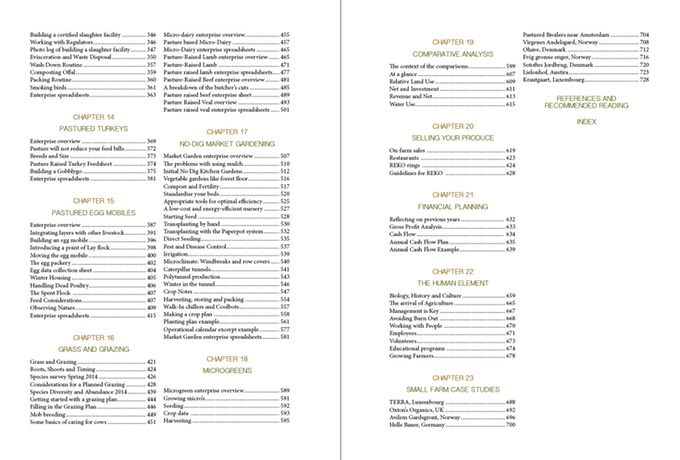 From the kickstarter page:

“This book is perhaps the most eclectic, comprehensive compendium of small farm wisdom I have ever seen. It will be a must on every aspiring integrity farmer’s bookshelf for years to come, starting with mine. The world can thank Richard for his attention to detail, his love of experimentation, and his passion for functional truth. I can’t think of enough superlatives to describe this wonderful book.”

"I cannot recommend this book highly enough. Here in one place is a practical guide to any farmer – new or seasoned - seeking to farm regeneratively. And it’s not just about soils and plants, but the quality of life and the financial health of the people seeking to regenerate them. Perkins, rather than prescribing practices, shares his journey in figuring out which ones worked best for him. And the power of the book is that it will help you figure out what works best for you.”

“Destined to become a classic agricultural text for a whole new generation of young farmers and aspiring young farmers. I’m a big fan of Richard’s work. Having visited and seen first hand the amazing progress one couple can make with dedicated, organized and thoughtful work and help. How a run-down farm can become a showcase. This book lays out the roadmap for a renaissance in small profitable farms. It also goes into immense detail and shares the numbers that are so often lacking. The preface of Cato’s words shows there is nothing new under the sun and how often we forget common sense. This book is full of such common sense updated to today’s reality and tomorrows need.”

Stefan Sobkowiak, Miracle Farm and The Permaculture Orchard: Beyond Organic.

“This book stands out for its levels of detail, based on experiences informed by careful planning. Richard leaves no stone unturned in a quest for the most efficient ways to farm, in harmony with natural processes. Stunning photographs from Ridgedale Farm illustrate the effectiveness of his methods. He gives precise descriptions of understanding a whole-farm system, then all its components from building soil, managing water, planting trees, fencing - but only after getting clear on your aims and possibilities. The descriptions of marketing produce and financial planning are vital reading, about the most difficult aspect of small-scale farming. There are chapters with amazing detail about growing mushrooms, raising pigs and poultry, looking after grass and above all the soil. I was pleased to see his thorough descriptions of growing no-dig vegetables, advice on starting seeds undercover, and managing pest and disease in simple ways linked to soil health. In summary, the book is an excellent investment for anyone considering how to earn a living from the land.”

This book transcends and includes Making Small Farms Work, which was self-published and sent out from our farm to over 90 countries worldwide.  Gathering fantastic reviews and bolstering a new generation of entrepreneurial farmers in Europe and abroad, Regenerative Agriculture is set, in the words of the world's most well-known farmer Joel Salatin, "to become a classic in our genre." At 750 pages, this book is an extensive manual, detailing why and how diverse and integrated small farms work, including the most technical and financial data shared in any book in the field.
Who would benefit from this book?

What makes this work important is the synthesis of deep experience in pioneering education combined with full-time successful farming. A high proportion of our training participants from Ridgedale Farm have left to start successful farm businesses, a selection of whom are featured in this book. We believe this book is written in a manner that is simultaneously comprehensible to a beginner, and yet will offer much to experienced farmers, designers and homesteaders. It covers farm design, installation, management and financial planning and offers an extensive comparative analysis to help people coming into farming to get started smartly.
Some more Context….

For us, there are three main legs to the stool we use in our work.  Besides Permaculture design we rely primarily on Holistic Management and Keyline design. We have also drawn a lot of inspiration from pioneering US farmer Joel Salatin of Polyface Farms, whose models we have adapted to the European context and have helped spread far and wide in this part of the world.

Whilst we are situated in the most challenging economic and cultural context I have experienced anywhere on the globe, this book is very relevant and instructive for people farming in any European climate zones (or equivalent), and worth reading for anyone interested in this field. Indeed, we have been honoured to host people from over 50 countries at our farm, who have travelled to the farm to participate in our unique education programs.

This book shares an approach that holds ecology, economy and society as equally valuable, and encourages you to take full responsibility for your actions. It imparts deep insight and practical experience in the context of well planned and holistically managed operations.

Here is the link of the previous work: Making Small Farms Work

I expect this book to be on efficiency as its predecessor. Here is an example:
I was just searching through books for how much reduction in egg production I can expect during winter months. Not that I am forcing animals to lay more eggs, they are high production birds. Their diet needs to be watched carefully. I prefered to have high production birds instead of heritage breeds or dual purpose due similar reasons why some prefer c.cross for boilers (with aditional reasons such as high quality compost production and recyling food waste). They are high input, so it is wiser for me  to check how much I spend vs how many eggs I get. They produced roughly 80% for the last 2 months.
In "making small farms work" Richard included an excel spreadsheet of egg production. Interesting.  He starts with a 500 bird flock in Jan (probably with older birds) and keeps them till the end of september. He expects 25 of them (5%) to die during the season. A second fresh flock is introduced in  june (same 5% loss can also be observed). So  I can deduct from this date I can expect to have 5-10% animal loss during season. Also I can see that production flactuated between two plateaus. Roughly 65-70%  between dec and march and 80-85% between june and septh. So 75% production is what I can expect from layers for the next month.
Interestingly, he also included another table of how much he spent on oyster shells, food, straw, root veg., electric and inspections. There is an excel table included about the time spent for egg collection, packing, maintaince and selling. Frankly I find these data very useful.
This chapter includes other interesting titles too. Such as; how to deal with dead poultry (by composting, explains how),  designing an egg mobile (moved by atv) and mobile feeder, building next boxes,  integration with pther livestock, selling, feed considerations,  how to conduct field surveys (to count insects and such), why pellets, why fish based protein.
Making small farms work is a 300 page book, this book will be over 700 pages. I expect a lot more.

posted 1 year ago
Sounds like a good book. It's hard to find very specific information like that, but would be very helpful to have when planning a farm.

I like his YouTube channel, and that he has a very successful and diverse regenerative farm on a smaller acreage - many beginner farmers are starting with this size of land rather than larger acreages so it's been helpful for me to watch and read information from Ridgedale about how he does eggmobiles behind ruminants, but just has the ruminants for home use, and eggs for the farm business means he gets the benefits of Joel Salatin's ideas but without needing enough acres to run cattle as a farm enterprise.

It's good to see his Kickstarter is going so well.

A Year in an Off-Grid Kitchen - Cookbook kickstarter is now live!

hans muster
pollinator
Posts: 241
54
posted 1 year ago
I have read the other/old book, which is already great, although missing some editing. I expect this one to be way better. And even if it is expensive, I'll buy it again...
Thanks for showing that the kickstarter is running, was almost too late.
s. ayalp
pollinator
Posts: 283
Location: istanbul - turkey
94
I like...