posted 1 year ago
Hello Permies people. It's been some time since I've posted anything here. Today I've got the itch to share some of the fun I had this year. I apologize for the image quality, at the time the shop had no lights and I took only snapshots without thinking that I might like to share later.

It's easy to be sucked in the "real" world and lose touch with reality. After the holidays I had a pressing need for a distraction from the daily grind. So I took a walk to the shop as there's nothing like fresh air and extreme cold to bring me back to my senses. After the stove was alive I sat to stare into the flames and ponder about life. The time was ripe for a new project, something I've been wanting for many years. I'll build a forge. This is January 2019. 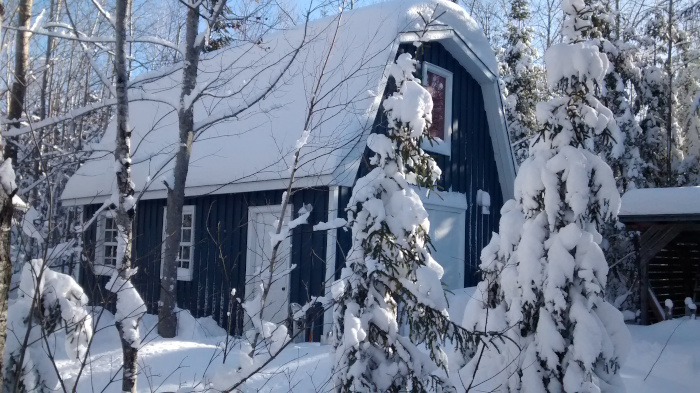 The forge lining would be a mix of ash and clay. I read that ash alone can do the job although I'm not too sure about how resistant to wear that would be. There was plenty of ash in the stove and it was an easy job to get that through a colander. For the clay I used dirt collected near the black spruce stand. I dug up that dirt hopping to make earthenware with it but never succeeded. For the forge lining it would do. I needed something to crush the lumps to a fine powder, I cut myself a broken aspen tree that was still standing and brought it in. While at it, why not make myself a new mallet? Surely this post will grant me a couple of those pep badges! 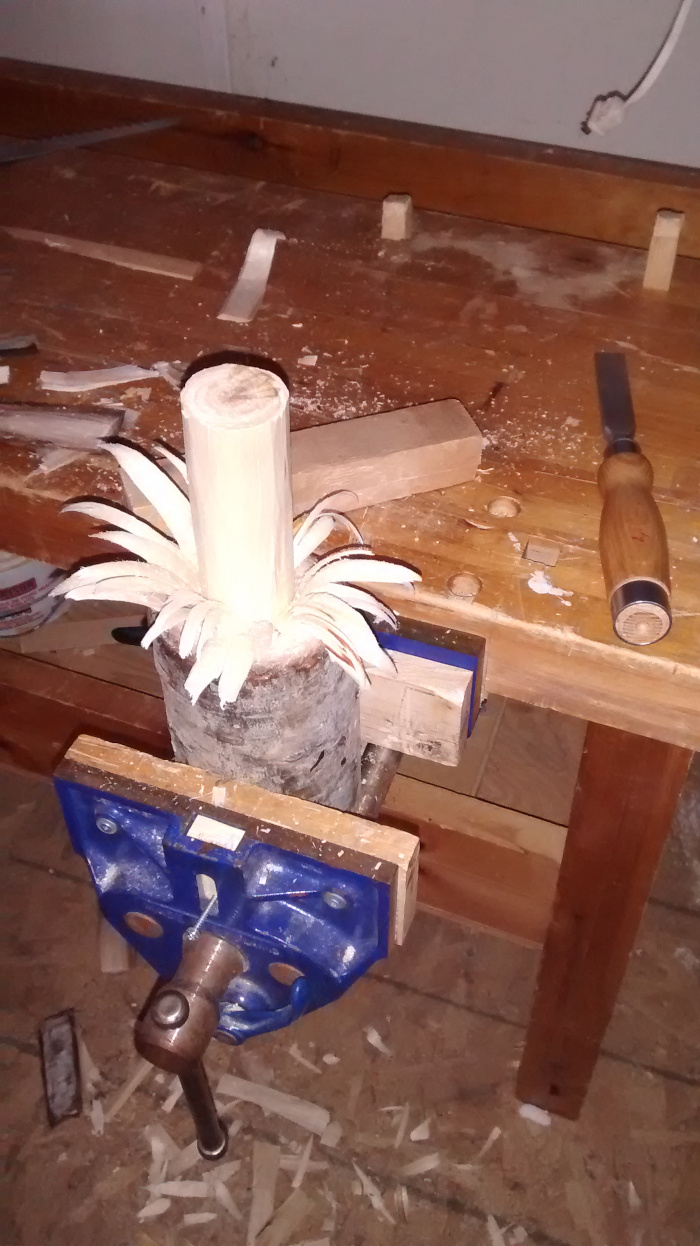 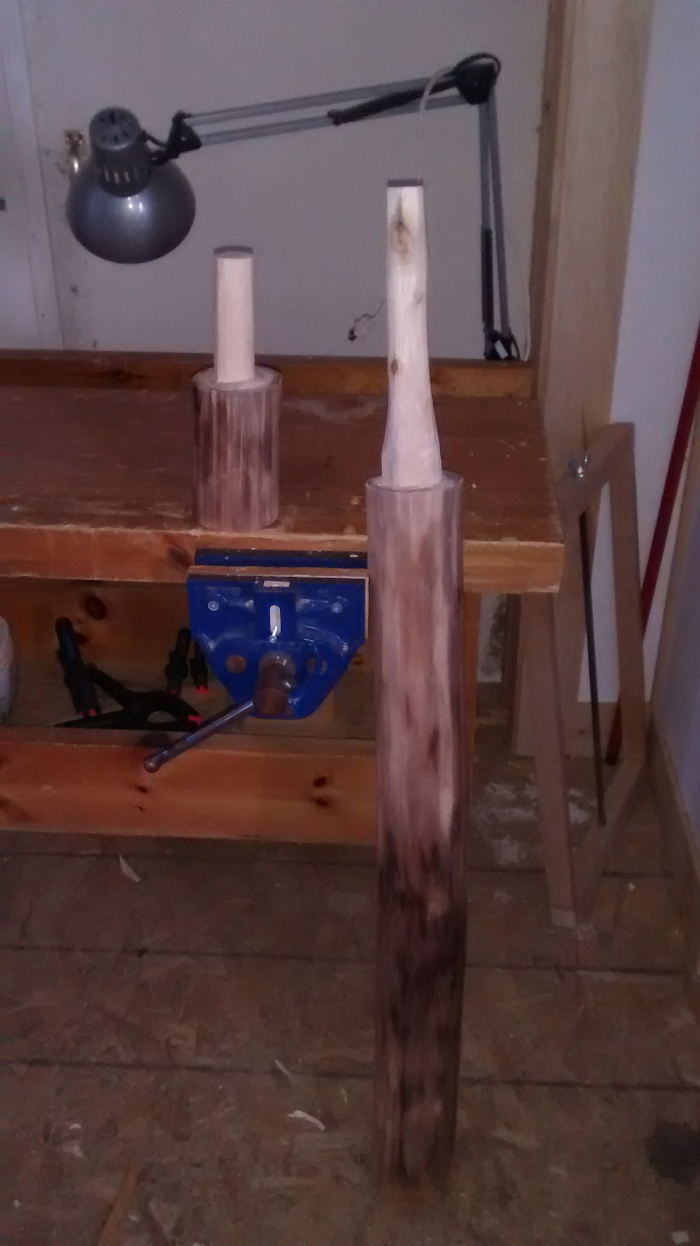 The forge itself is simply a box with a pipe for air flow. I used leftover spruce planks for the box and bought 2' of galvanized pipe with end caps. I cut the pipe in half, drilled some holes, put the cap on and then burned off the zinc coating in the stove. The lining mix is 2 parts ash for 1 part clay. It's just like concrete, the mix seems dry so you keep adding water and then all of a suden the mix won't take more and becomes too runny. Eventually I got it right. The wet mix smells like concrete too! 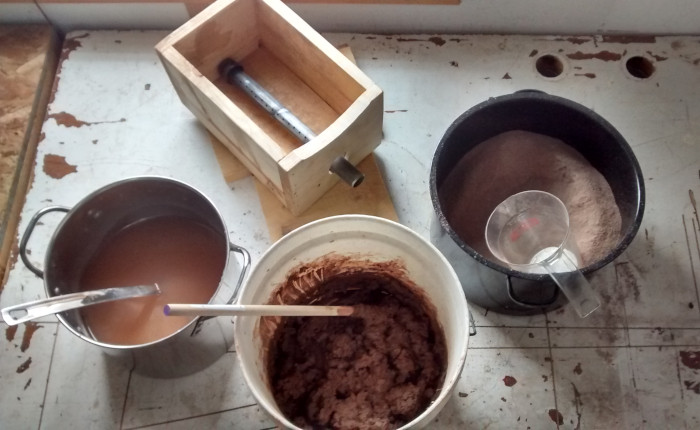 The forge is done and left to dry. My father exclaimed that it was too small but from what I read online and the projects I have in mind it's plenty big. The lining froze and cracked before it had a chance to dry but no worries, it's easy to patch. 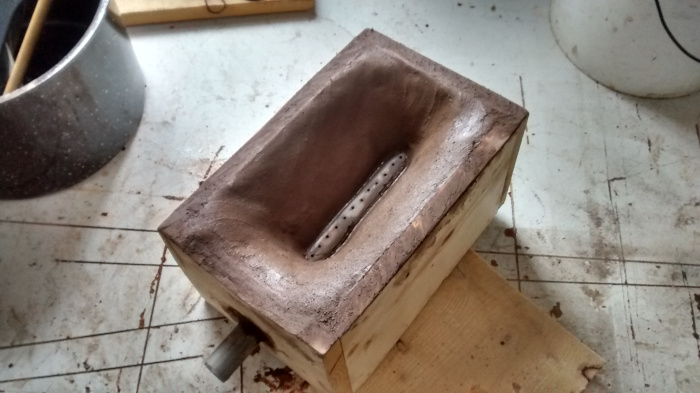 Next came the bellows. The European models I've seen use large amount of flexible material, which I don't have. Instead I turned to a Japanese design. It's just a box with two compartments (one for the piston, one for the plenum) and two pairs of flap valves which control the air flow. I don't have many pictures of the building process but it's pretty straighforward and works great. 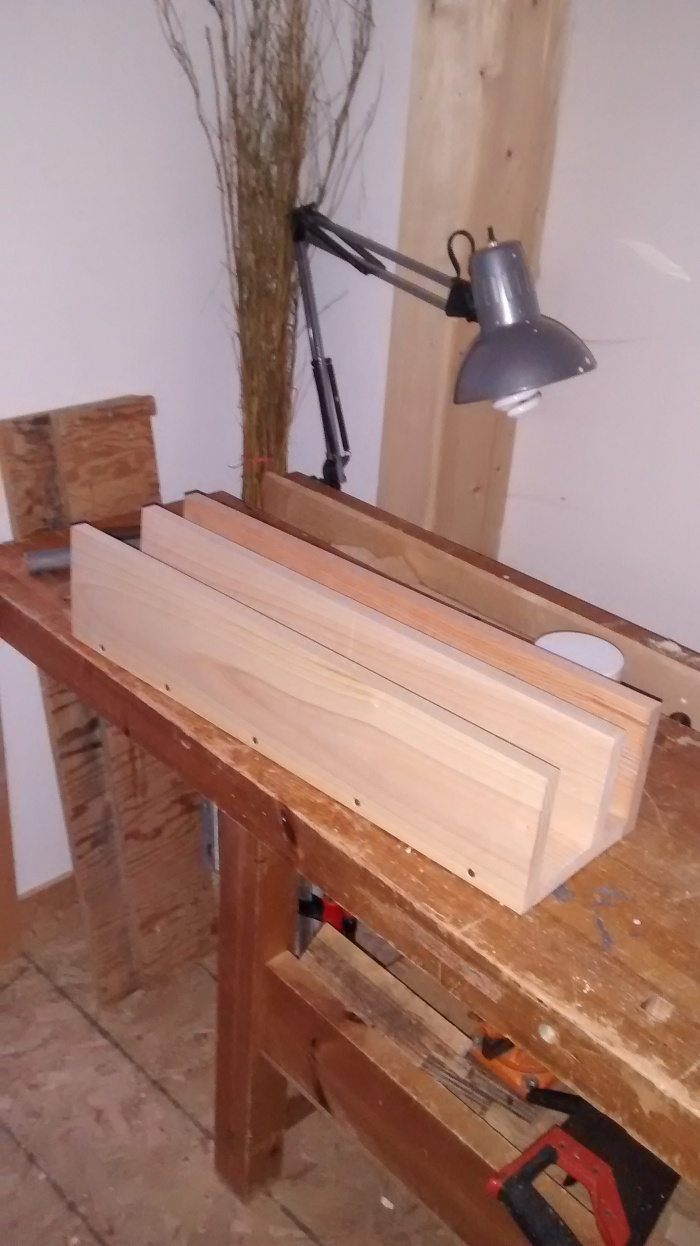 For the valves I cut pieces off an old leather jacket. My first idea was to glue a block of wood on the flap to ensure it would seal. 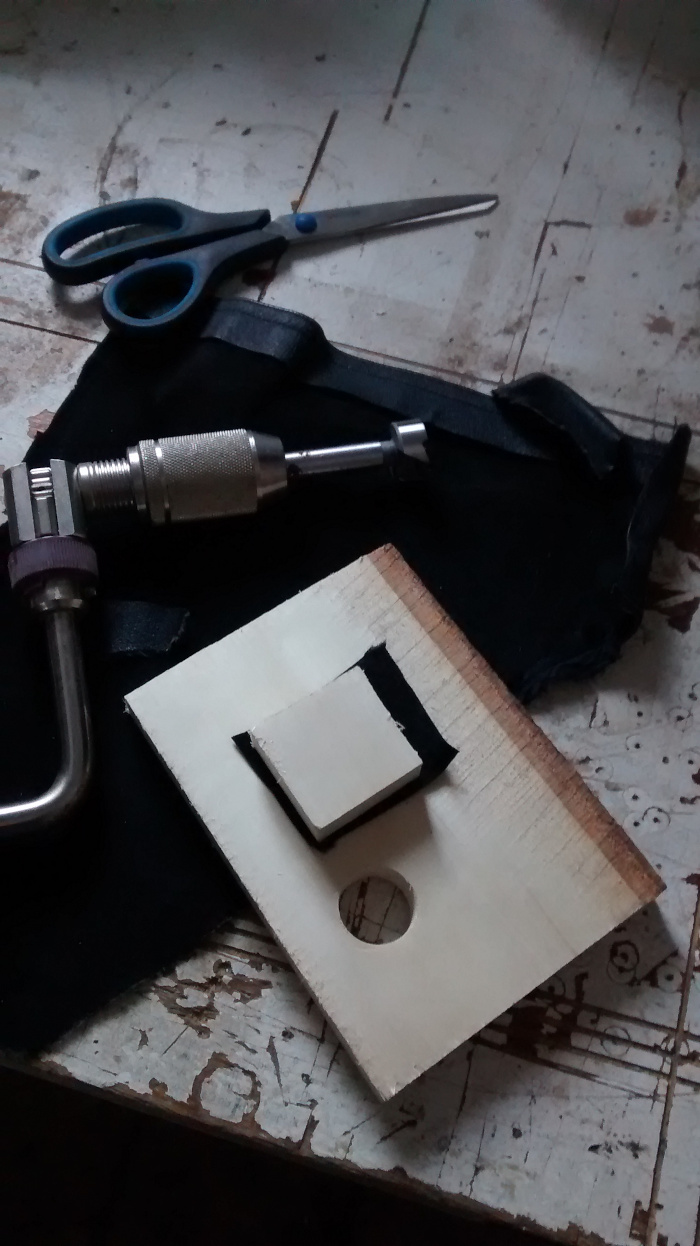 In fact the weight of the wood will keep the valve open and prevent it from sealing properly. Keep it simple. 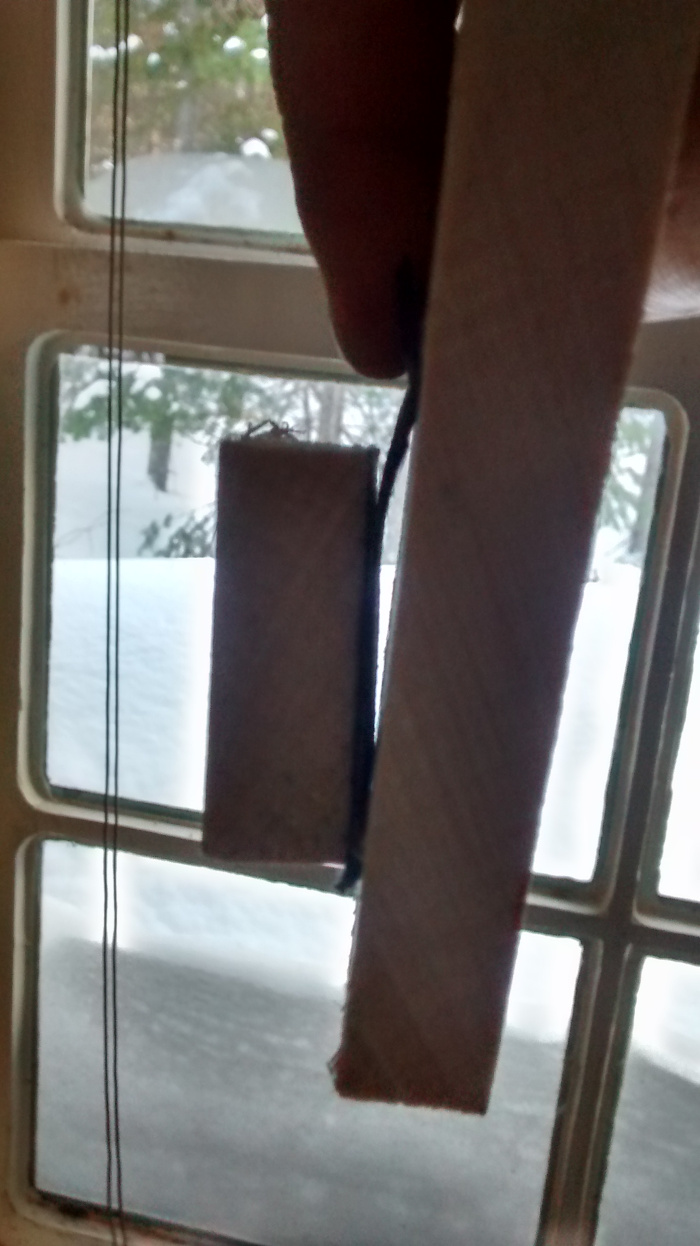 Here is a very bad picture of the whole thing. There is an air intake hole on the bellows that is hiden by the piston handle. I sanded the interior of the air chamber and put a generous coat of wax. This might give me problems eventually because I noticed the wax I used tends to become gummy with time. The piston is simply a square piece of wood on which I glued flelt for an airtight fit. 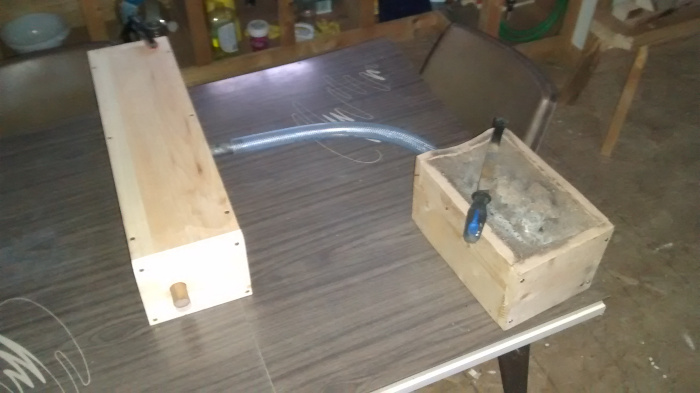 To use, fill the forge with charcoal, light it up and then pump. The sparks are way hotter than regular sparks from a wood fire. They burned holes in the table top and made black marks on the floor. Of course you shouldn't use the forge indoors but this was just a test with windows and doors open.


Next, the anvil. The Internet says anvils can be pretty much anything harder than the material you're forging. I chose a design that appealed to me for its simplicity. For this I stole a piece of metal from my father's garage. It says "très dur" which means real hard. It's about two feet long and weights a ton. At this stage I was testing for height and looks. 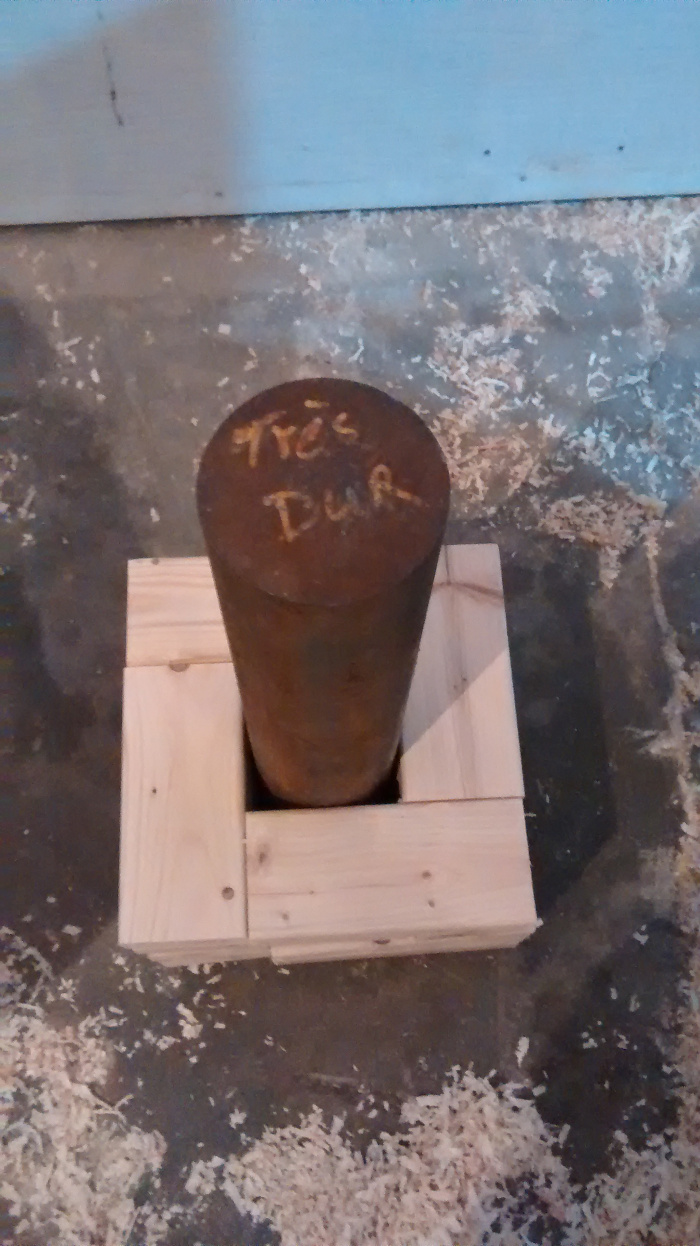 I used a brush to clean the rust. I bought a couple of 2x4s and built it up to a comfortable height (they recommend knuckle height) gluing and screwing the pieces together. When done I couldn't resist and gave it a good wack. Ouch! The ringing was way too loud and hurt the ears! 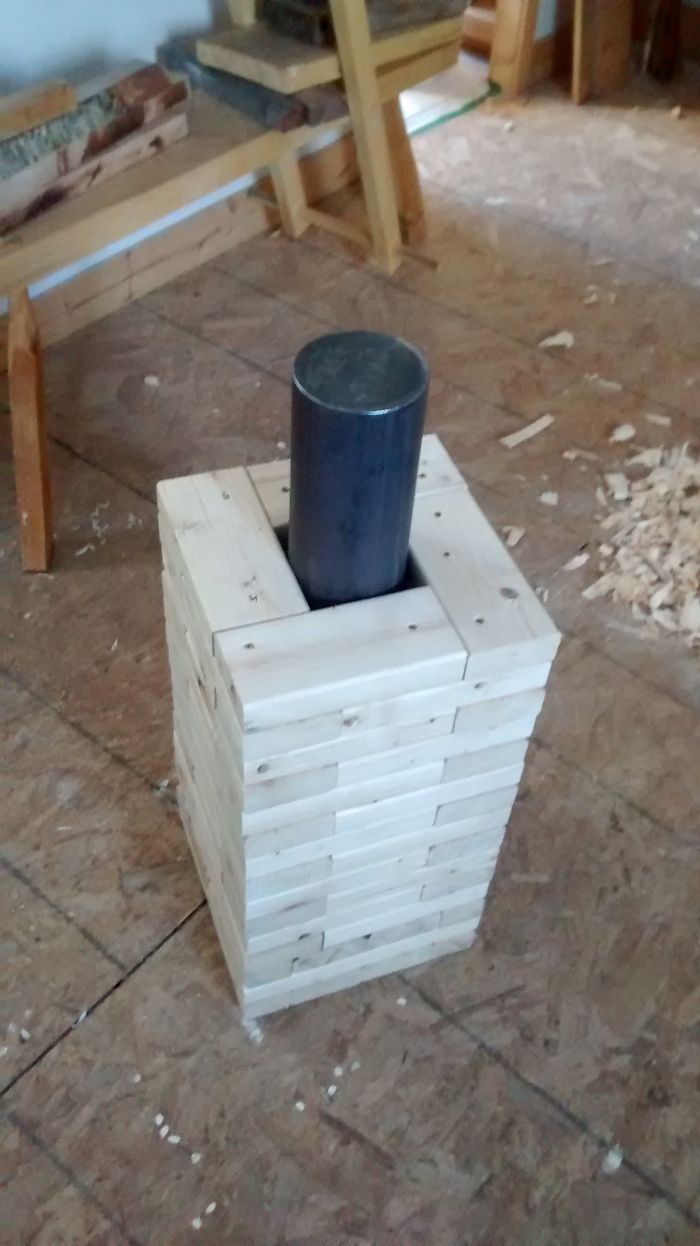 So I took a shovel and started digging for treasure. 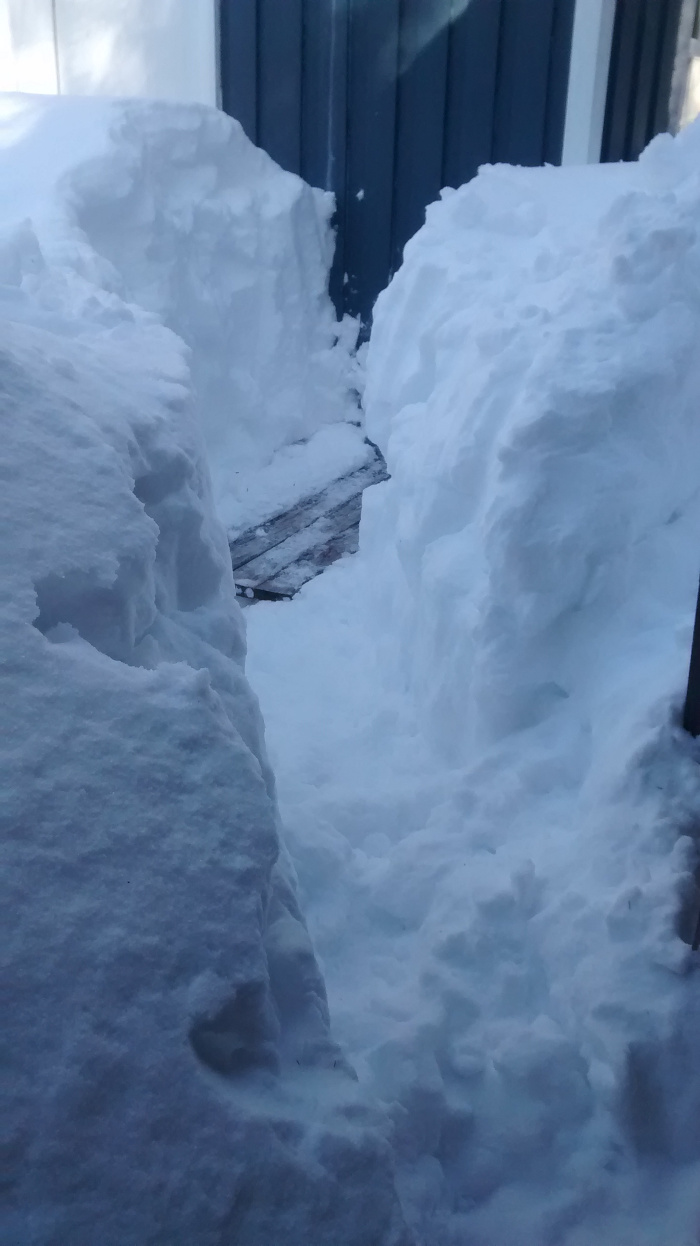 This is sand from the beach I collected for a project that never happened. It was to be transformed into green sand for casting aluminum. 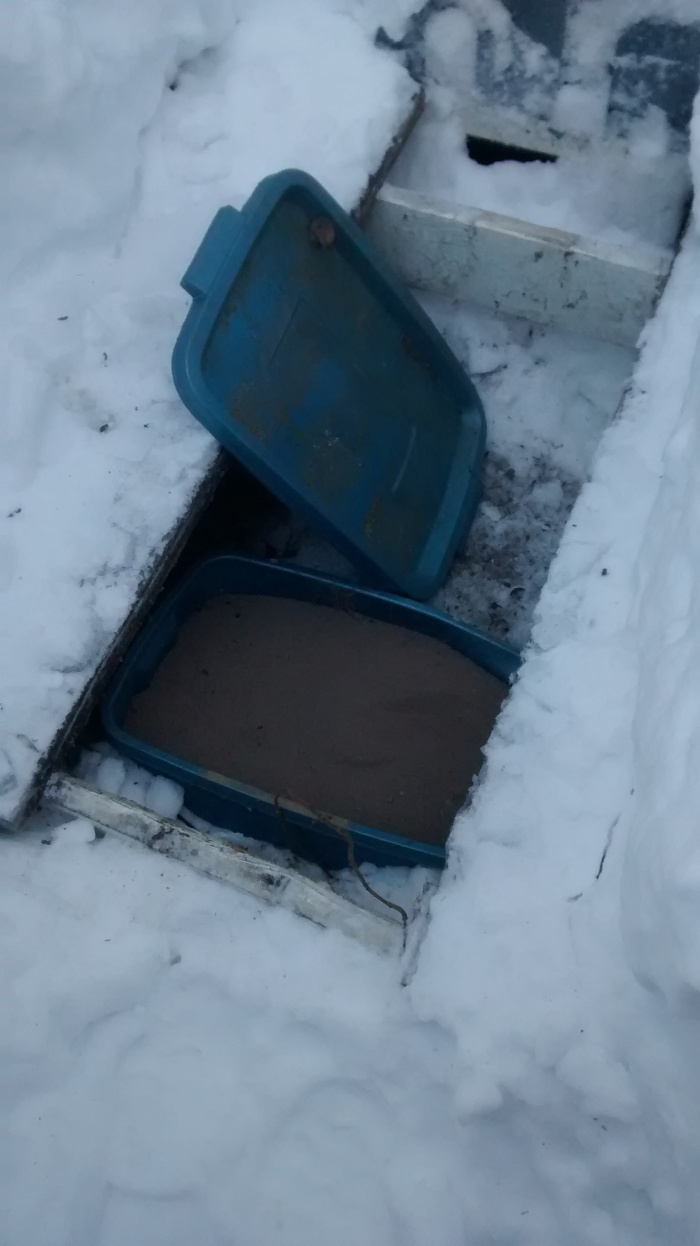 Filling the gap between the anvil and its base dampened the ringing sound to a nice comfortable level. Next I sealed the top with leftover forge lining and voila, all done. 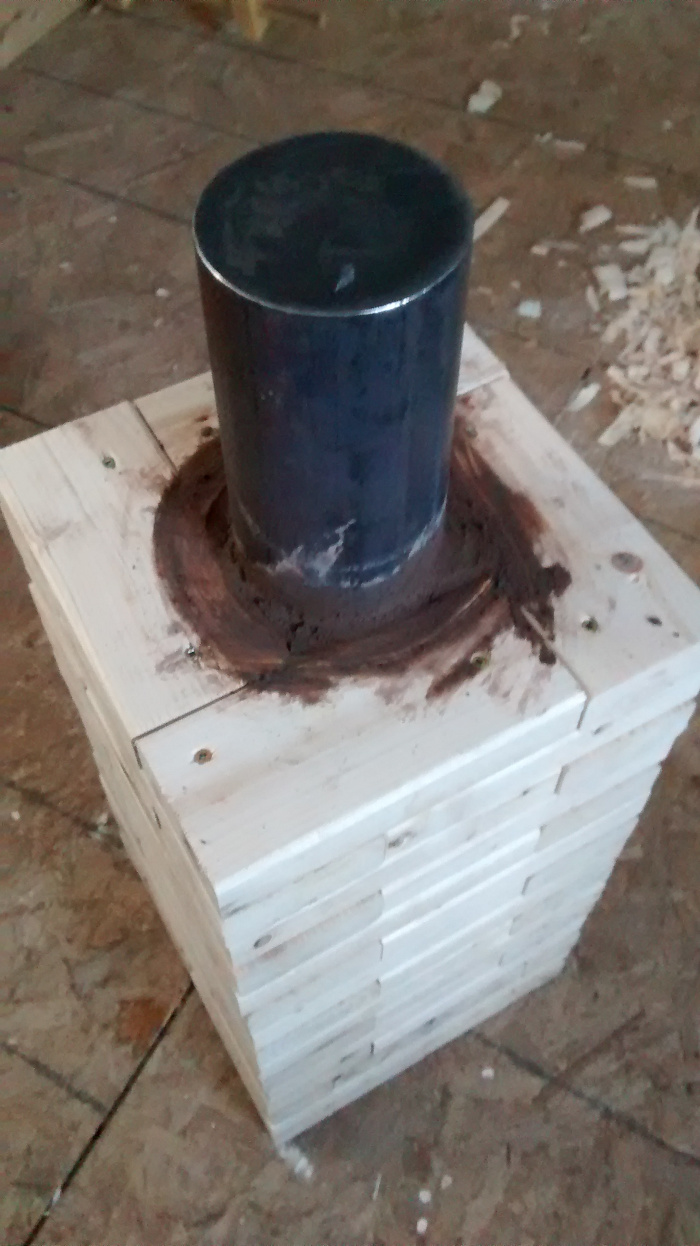 This is where I plan on using the forge. As you can see, going outside wasn't an option so I put the project on hold. 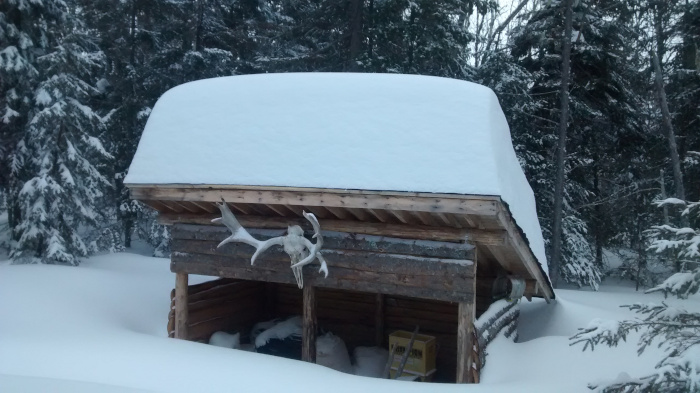 Now I lift my head, summer is gone and October is already running away and no chance to play with my forge. Maybe next year.

bruce Fine
Posts: 859
25
posted 1 year ago
so clay+wood ash=refractory/fire brick
i have been looking to learn how to use wood ash quite some time
great project
Jack Edmondson
pollinator
Posts: 415
Location: Central Texas zone 8a, 800 chill hours 28 blessed inches of rain
74
posted 1 year ago

Francis Mallet wrote:summer is gone and October is already running away and no chance to play with my forge. Maybe next year.

Well I have this bookmarked for updates.  Hope to see more when the weather warms.
Phil Gardener
pollinator
Posts: 320
Location: Near Philadelphia, PA
68
posted 1 year ago
Following with interest!
Travis Johnson
pollinator
Posts: 4958
1154
I like...

posted 1 year ago
Wow, that is a really nice design for a forge! That is also quite the project, and really well done.

My Great-Grandfather several times removed worked for Great Northern Paper and said in one of his journals that on a bet, a blacksmith at one of the logging camps went out and felled, hewn, and forged up an entire logging sled in a single day. If you have ever seen what one consists of, you know that was quite the feat.

As I said though, you did a really nice job.

posted 1 year ago
Thanks guys, your replies motivated me to try it out. I think I would have regretted waiting until next year to fire the forge.

I want to make tools and hardware I can use on the woodlot so my first attempt would be some kind of hook from a piece of 3/8 mild steel. Something big from which I can hang stuff to dry maybe. 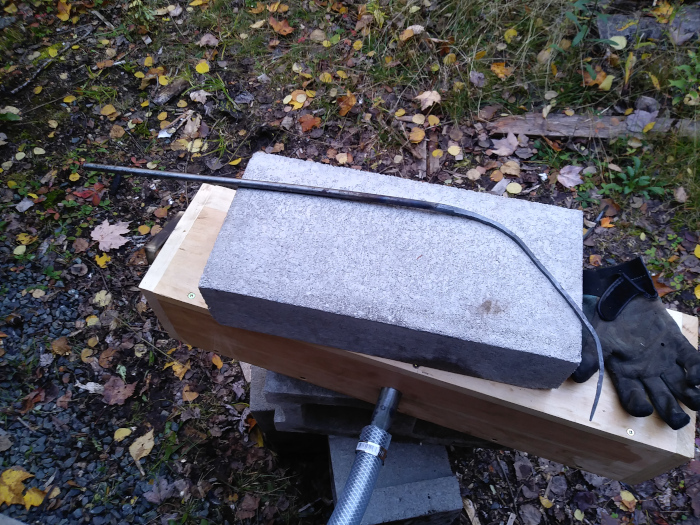 The finished product is about 12 inches long. My woman says it's scary but I really like the look of it! I sure learned a lot and had tons of fun.
Forging is difficult to describe, it's incredibly dynamic. It's not just controlling the hammer as I naively assumed. Sometimes the metal moves in ways that are not intuitive.
I was concerned that the piece would break but I guess mild steel is forgiving. I'm amazed at how malleable steel can be! I tried welding the eye but that didn't work. 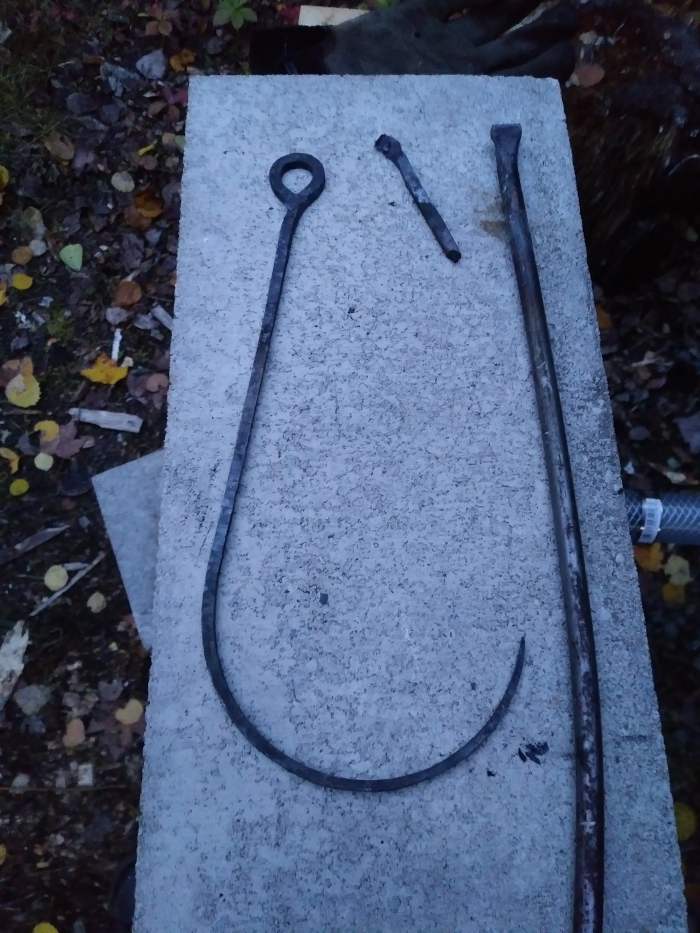 Travis, I don't know what a logging sled looks like but it took me two hours to forge this thing, I've got a long way to go  lol

The forge was warm on the bottom. The sides were warm near the bottom but too hot to touch near the top so I'm not sure how ash and clay perform as refractory.

The next forge I make will be twice as wide, this will make it easier to move the coals around.

The bellows piston shrunk during the summer, weakening the seal. It still pumps but after a while you really start to feel the wasted work. Same thing with the hammer, I'm glad I resisted the urge to get a bigger one!

posted 1 year ago
Nice job Francis, and a very even taper on the hook. Keep up the good work!