Chance Selva
Posts: 12
4
posted 3 months ago
What do you all think of this sort of vortex plow design by Viktor Schauberger?  The idea appears to be to disturb the soil starting out like a normal plow by inverting it and then flipping it back round so the soil horizons are ultimately the same.  Will this work?  If it does, it might be interesting to use it in say a strip till system ala Elaine Ingham with perennials recolonizing the edges while annuals take up the center of the strip.  Anybody do 3D design want to have a go at it so we can 3D print a small scale proof of concept?  My friend who does excellent 3D design work says it would take him about 6 hours to pull it off, we could crown fund it if people want to investigate.
641D998E-B810-485C-9353-EB5A7E391AA7.jpeg 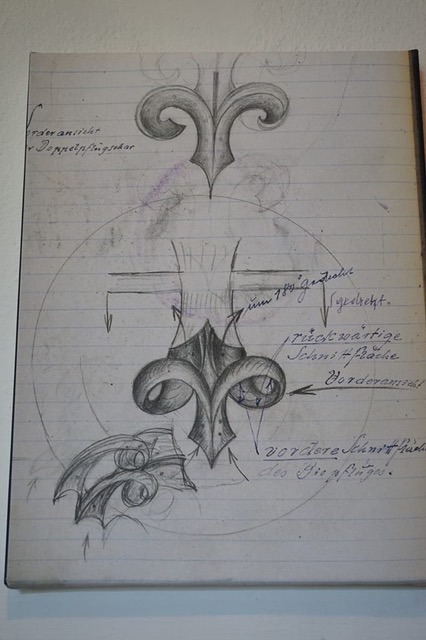 posted 3 months ago
hau Chance, have you ever seen one of these plows for sale at a farm implement store?

As I recall the Schauberger plow was supposed to not only turn the soil in a spiral but it was also supposed to be very durable, which it was not and it turned out to not turn soil as advertised either.
I doubt that one of those plows survives today, but you could always find a good blacksmith and provide them with the drawings and find out if they will build you one.
Generally if you find a design of some farm implement and you can't find the actual implement for sale, it tells you there was something terribly wrong with the design. things that work well stick around forever, things that don't disappear.

posted 3 months ago
You can invert soil with a regular plow if you go fast enough.

For a lot of Maine Permies, they have been to the MOFGA Fairgrounds, also known as the Common Ground Fair. We used to farm that land, and it is all sandy. Well with plowing you want to go fast, one of the few farm tasks that has to be done as fast as possible. Anyway, with no rocks in the field, we used to plow so fast that the sod would flip 365 degrees add land sod-side up.

As for the mentioned plow, I would never work. The plow has a hole in the center which is where rocks of certain sizes would jamb. Perfectly screened loam...yeah it might invert the soil 365 degrees, but not in any kind of rocky soil.
Chance Selva
Posts: 12
4
posted 3 months ago
This design wasn’t ever made as far as I understand, so I’m not sure it can be written off on the basis that it would exist if it worked. There was a group that tried a certain design of a Schauberger plow but not this one from the original drawing.  Big rocks could pose an obstacle, but they can pose an obstacle for a lot of implements.
Travis Johnson
pollinator
Posts: 4958
1125
I like...

Chance Selva wrote:This design wasn’t ever made as far as I understand, so I’m not sure it can be written off on the basis that it would exist if it worked. There was a group that tried a certain design of a Schauberger plow but not this one from the original drawing.  Big rocks could pose an obstacle, but they can pose an obstacle for a lot of implements.

Have you looked at the "sweeps" as they are called for chisel plows? There is a lot of different designs that might get you where you need to be right off the shelf from the tractor dealership. In the 1980's our local Soil and Water Conservation District had a harrow that was half disc harrow, and half plow that was called a "Soil Saver" that you could borrow to bust sod. Its rear tines had s curved sweeps that acted as mini (like 4 inch wide) moldboard plows.

The moldboard plow is making a huge comeback now. Farmers are starting to realize that getting the trash back under the ground saves them in fuel costs over vertical tillage. The plows are now square head plows, a lot smaller in size, and take less fuel and horsepower.

It just shows what is old, is new again.
Chris Kott
pollinator
Posts: 3472
Location: Toronto, Ontario
458
I like...

posted 3 months ago
To be clear, the goal is to leave the soil in the same orientation as it started out, yes?

I have a hard time seeing how such a design would work on different types of soil. Apart from having to stop for any larger-than-fist-sized rock, the success of the flipping would rely entirely on the ability of the earth to stick together. I also suspect that flipping the soil around like that will negatively impact soil structure whatever you do.

If strips of perennials are being left in close proximity, the soil life will recolonise any damaged area after a good mouldboard plowing, or really any plowing at all. In some cases, getting food for the soil life into the soil is more important than trying to nurture existing soil life in conditions not suitable for soil life.

And if the populations of soil bacteria and fungi need boosting, there's always actively aerated compost extract and fungal slurries.

Both of these, and working with tried, off-the-shelf equipment in a non-standard way (plowing between fallow or perennial strips) will accomplish the goal of healthy soil. It may even accelerate it.

I love the Schauberger plow concept, but I think it's a failed design. It's designer seems to have thought that material would feed through the mechanism at a constant rate, as though belt-driven, when in actuality, there's a lot more of friction and gravity to it.

Chris Kott wrote:To be clear, the goal is to leave the soil in the same orientation as it started out, yes?

From his observations with moving water, I am going to assume Schauberger wish to 'energize' the soil by vortexing the path the soil would take over a plow, comparative to the tendencies he observed in streams.  Whether one agrees or not with his observations, I believe his theory would fall short of his expectations on the basis of limited movement alone.  Fluid dynamics allows for multiple iterations of helical motion over a longer distance than the soil would travel through a single fixed point of a plow.  One is only going to flip the dirt once with a plow.

The results he achieved with water can be debated endlessly; but either way would not translate to a non fluid medium, in my opinion.    Mechanically, I agree.  The design might work in some soils under some conditions.; but certainly not a practical implement.
Grady Houger
Posts: 79
Location: Eastern Washington
19
posted 3 months ago
The only way to know is to give it a try! But it sure doesn't fit with any of the known-good plow point designs.
There are thousands of different points, you can get catalogs of them, and several companies are in the market of designing and making custom points to your specifications. I just got my first no-till drill from an experienced neighbor who was upgrading. He pulled his custom points off it and gave me all the standard points from the drill he upgraded to. He had years of design into building the perfect custom point for the crops and soil he has.

Soil type and amount of rocks is critical. Tungsten carbide tips are standard in my area. And clay can adhere to the point until it changes the tool shape entirely.