posted 10 months ago
The chick in the picture below is 12 weeks old. She's not really growing feathers. She's eating the same 19%ish chick grower/broiler feed as the rest, which are growing well and look like small chickens now. She did sustain an injury inflicted by other chicks, so I sequestered her so she could recover without being picked on or pecked to death. I've had a few other chicks injured by others, and they fully recovered. I did notice a pattern, and that is injured chicks seem to lag in growing and I suspect most their energy goes into healing, instead of growing. But this one is a little different. I don't know what's wrong with this bird, and I don't think she'll survive freezing temperatures if she goes back outside, and I'm just not sure if she'll make it in general.

Anybody else have thoughts or ideas? 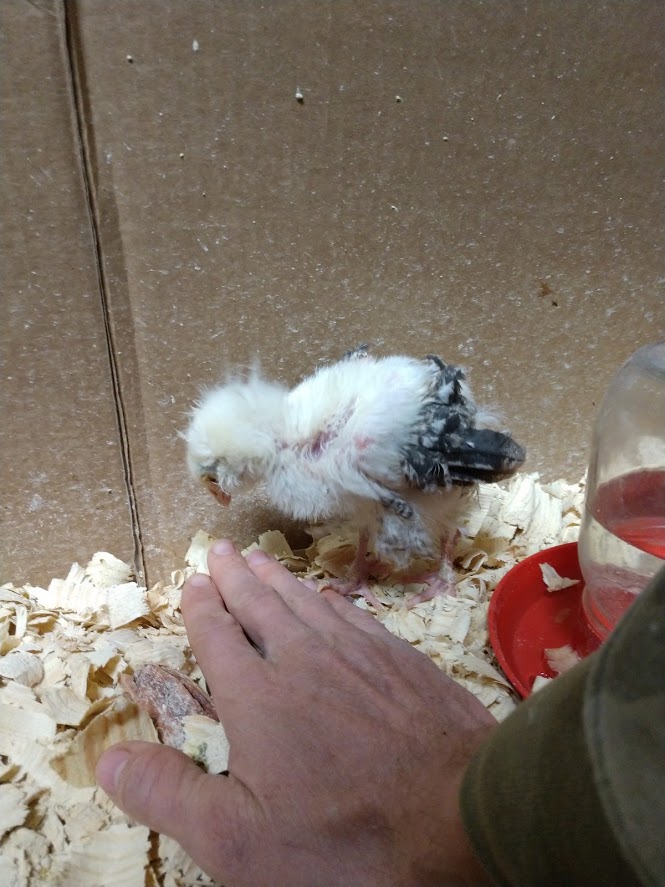 posted 10 months ago
Some critters are just born/hatched with internal problems we can't see, and they don't grow up properly.  My little pet cat Biggins can't eat more than a tablespoon of food at a time without throwing up, and has never grown to full size.

In the case of the chicken, she probably won't achieve much as a layer if she survives but might make an ok pet chicken.  If she were growing normally but just small, she might turn out fine.  I had a "runt" chick named Peanut who grew up to live a long, productive life as a laying hen.

posted 10 months ago
can you get electro-vit from the feed store?  It's a general vitamin powder with high B-vits and electrolytes.  I find this is the most efficient 'medicine' for chickens.

For the first day, I give them double strength in their water, then the next day and until they are better, I give them a choice of regular water and strong electrovit.  They usually choose the vitamins, but then go back to regular water after 3 or 4 days.

The other big thing is preventing depression.  I often cut a bit out of the side of the cardboard so they can see what I'm doing (but not so big they can get out) or I'll put something so they can see the other chickens.

posted 10 months ago
Another thing that is helpful is to give handfuls of good garden soil or aged compost, preferably with small bugs in it like immature sowbugs.  Chicks get a tremendous amount of nutrition from this.  I always gave chicks soil or compost as soon as they are old enough to get out of the nest.  "Pecking" at the soil with your finger helps show them what to do if they don't get the idea right away.

posted 10 months ago
So, this chick didn't make it. Later in the evening on the same day I took that picture, I went to check on her and something was terribly wrong and she couldn't walk or really even stand. She was trying, and kept flapping her little wings and falling over, and it looked like she was unable to extend/use her right leg and something was wrong with the left too. With the lack of growth, lack of feathering, and losing her ability to be mobile it was clear to me this chick was heading downhill rapidly, and it was clear to my wife and I the best thing to do was to dispatch this poor bird, which I promptly did. Little chicken had a good spirit and a lousy body and her spirit can come back and try again.