Jennifer Lowery
Posts: 153
27
posted 1 year ago
I recently learned one can quickly remove chloromines from water by adding 1 gram of vitamin c powder (ascorbic acid) to 40 gallons of city water.  Just wondering if anyone else has done this here.

Yesterday I bought a 32 gallon grey Rubbermaid Brute "food grade" trash can along with a bulk head and spigot.  I figure I'll fill it every so often with city water from the hose and add about 1 gram of ascorbic acid (vitamin c) powder to it.  I hear it neutralizes the chloromines in a matter of 10-15 minutes.   This is amazing.

I do have a worm bin and I've seen videos of people using this same trash can and water purification method to make compost tea.. just wondering if I should do this every so often as well.. some compost in a nylon stocking, a pump to move the water around , some molasses and kelp.   Does it really help all the plants?    Could I maek this and let it sit for a few days before use?  I imagine it'd take me at least several days to go through the entire 32 gallon container.. since I only have six 4' x 4' raised beds at this point.

Let me know what you think of what I've done so far.  I can't think of an easier affordable way to get my plants water without chloromines/chlorine in it.. which kill off beneficial bacteria in the soil.
s. lowe
pollinator
Posts: 866
193
posted 1 year ago
So what happens to the chloramine? do you end up with some precipitate on the bottom of the can? I'd love some more info on this as last time I looked into it all I could find was that reverse osmosis was the only way to rid yourself of chloramine. Do you have any pics of your set up or results? Would love for this to be this easy
Catherine Windrose
pioneer
Posts: 241
98
I like...

posted 1 year ago
This specific to chloramine:

Tap Water Disinfection: What's The Difference Between Chlorine and Chloramine?

Ha.  And this, an unexpected find at the USDA though only for chlorine: Using Vitamin C To Neutralize Chlorine in Water Systems

A significant excerpt is quoted below because when something works, the DOS (department of sadness) sometimes makes things disappear.  I had read the same, albeit with slightly varied times.  Perhaps due to differences in the amount of chlorine in water?  Thoughts:

INTRODUCTION
The purpose of this report is to summarize a study on using vitamin C to neutralize chlorine in water. The intended audience is sanitary engineers and operators of water and wastewater systems.

Operators of seasonal water systems sanitize spring-boxes or wells, storage tanks (figure 1), and distribution lines with a strong chlorine solution. After these operators sanitize the water systems, they must waste the chlorinated water. Chlorine can kill fish and other aquatic organisms. Therefore, operators must neutralize the chlorinated water before discharging the water into lakes or streams. The chlorinated water needs neutralizing if the wasted water goes to a septic system or small wastewater treatment plant, because chlorine can upset the bacterial balance in the system. Even very low levels of chlorine will harm or destroy aquatic organisms and beneficial bacteria. Operators need a permit from their State regulatory agency before discharging any treated or altered water to navigable waters of the United States or into a publicly owned wastewater treatment plant.
Water tanks in the field.
Figure 1 —Storage tanks.

CURRENT METHODS OF DECHLORINATION
Passive Methods
There are several passive methods for neutralizing chlorine. Operators may hold chlorinated water in a tank or pond until the chlorine dissipates because air and sunlight will neutralize chlorine over time. Operators may discharge the chlorinated water into soil, a road surface, or ditch, where the chlorine will react positively with organic and inorganic impurities. As long as the wasted water does not enter a lake or stream before the chlorine is neutralized, passive dechlorination (neutralization of chlorine) is preferable to chemical dechlorination.

Chemical Methods
Chemical methods of dechlorinating water are faster than passive methods. Water system operators may use sulfur compounds to dechlorinate water. However, to properly neutralize chlorinated water, operators need both caution and experience when using sulfur-based chemicals (Hill 2003). Sulfur-based chemicals are oxygen scavengers that will lower the dissolved oxygen in the receiving lake or stream, and some sulfur compounds are hazardous chemicals. At least two studies suggest that chlorinated and sulfonated water (sulfur-based dechlorination) poses a hazard to some sensitive aquatic species (Hall and others 1982; Rein and others 1992).

VITAMIN C DECHLORINATION
Vitamin C is a newer chemical method for neutralizing chlorine. Two forms of vitamin C, ascorbic acid and sodium ascorbate, will neutralize chlorine. Neither is considered a hazardous chemical. First, vitamin C does not lower the dissolved oxygen as much as sulfur-based chemicals do. Second, vitamin C is not toxic to aquatic life at the levels used for dechlorinating water. Although ascorbic acid is mildly acidic and, in large doses, will lower the pH of the treated water, sodium ascorbate is neutral and will not affect the pH of the treated water or the receiving stream. Both forms of vitamin C are stable, with a shelf life of at least 1 year in a dry form if kept in a cool, dark place. Once it is placed in solution, however, vitamin C degrades in a day or two.

Approximately 2.5 parts of ascorbic acid are required for neutralizing 1 part chlorine. Since ascorbic acid is weakly acidic, the pH of the treated water may decrease slightly in low alkaline waters.

The reaction (Tikkanen and others 2001) of sodium ascorbate with chlorine is shown below:

The San Dimas Technology and Development Center project leader set up a small experiment to evaluate water changes during the use of sodium ascorbate or ascorbic acid to neutralize a strong chlorine solution (figure 2). The experiment consisted of:

• Neutralizing the chlorine solution with either ascorbic acid or sodium ascorbate.

There's more, and with tables, however this above seems to be the gist.  Also read that chloramine is a combination of ammonia and chlorine.  Supposedly both evaporate and boiling can make that happen faster.  Perhaps the presence of more chloramine in water might also account for varied times for ascorbic acid to work.

Maybe a chemist is among us who will add clarification for the rest of us non-chemists :.)

Jennifer Lowery
Posts: 153
27
posted 1 year ago
This is my 32 gallon Rubbermaid Brute "food grade" trash can I got from Home Depot for like $30 or so.   Added a bulk head and hose faucet to the bottom.   Having it sit on some cinder blocks.

Filled with city water from garden hose -- which contains chloromines.

I added 1/2 tsp (2250mg) of Vitamin C for the 32 gallons.  I smelled the water before and you could smell the chlorine smell.  After putting the vitamin C in that smell is gone.

Ordered a 2 1/2 gallon galvanized water can with sprinkler/rain head on it.  Which I'll fill up from this water tank.

So by doing this I figure it's a good way to accomplish a few things:

1) Keep water ambient temperature so it isn't a shock to the garden watering it.
2) Remove the chlorine / chloramines from the water
3) Have a setup for brewing compost tea if I wanted .. just add the pvc piping inside and the air pump.
4) have a spare supply of drinking water for the family in case of an emergency

I'll find another place for it in the yard so it's out of sight, not on middle of patio

Wish the water came out faster from the spigot, but it will work okay.  I might replace it with something later on which lets water out faster.
IMG_4681.png 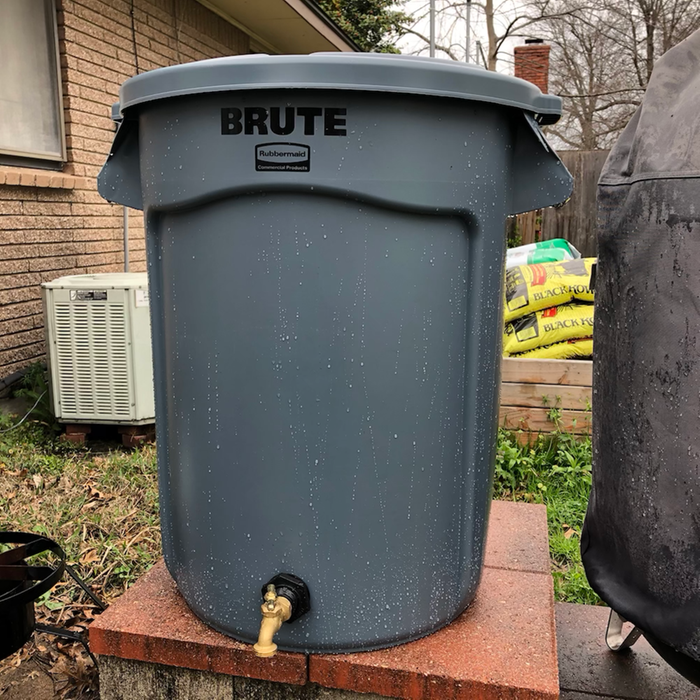 Jennifer Lowery
Posts: 153
27
posted 1 year ago
Got my watering can today.  Ignore the patio and dirty bricks.. got some cleaning and pressure washing to do!  Haven't even mowed the lawn yet.

I am thinking about getting a 12 inch long 12 oz ladle that I can dip into the watering can to water the bases of tomato plants and other plants which don't like moisture on the leaves. 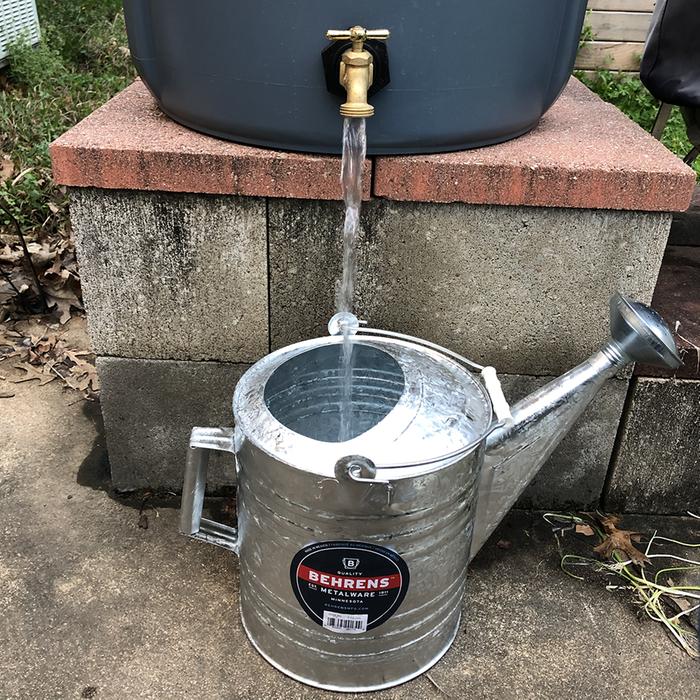