Lauren Clegg
Posts: 4
1
posted 1 year ago
Hi everyone
After seeing Biggest Little Farm, I've been pondering how I can step up vermiculture on the our 40acre farm. Obviously dont have 1 million dollars to implement!
The main outcome I would like is the worm juice for large scale spraying on our food forest and the degraded land in general.
I have a large dam that will have a ducks and that water will be pumped all over, to benefit fruit trees, aka geoff lawnton style. Would it be at all possible to brew the worm fertilzer in ibcs (totes) then pump it to the dam , then pump out? Would this be a bad idea for the ducks?
That's my main concern?
Or should I just pump straight from the IBCs to the food forest lines?
Thanks would really appreciate your input!
Timothy Markus
pollinator
Posts: 978
Location: New Brunswick, Canada
232
I like...

posted 1 year ago
Hi Laren and welcome to Permies!

I think the totes would be great to use.  Personally, if I'm going to the trouble of getting vermicompost and then making tea from it, I'm only going to use it where I need it, so I'd spray from the totes.  Brewing the tea oxygenates it and putting it in the pond would really dilute it and put the microorganisms in an environment with less oxygen.

There are people much more knowledgeable than I am.  Hopefully someone can give you more help.

posted 1 year ago
Lay down 8 inches of wood chips in the spring, and then again, 8 inches more in the fall.  Put them everywhere -- most certainly, among your fruit trees.

You'll have the worm farm of your dreams.

Spraying worm casting juice is good, but why not cut out the middle man and let the worms deposit those casting directly in the root zone of your trees.  Your land is capable of producing MILLIONS of worms, but you've got to make the conditions right for them to thrive.  Carbon on the soil surface, growing a cover crop in the off season, and cut all use of chemicals.

If you're not familiar with Gabe Browne, Greg Judy, or Joel Salatin, watch some of their Youtube videos.  All of them are farmers and they practice regenerative permaculture principles on their land.  They all speak of the central role that earthworms play in their agricultural system, and as far as I know, none of them keep a worm bin anywhere on their farm.  Yet they very intentionally breed worms by the billions.

Lauren Clegg
Posts: 4
1
posted 1 year ago
Hi thanks for the replies.
I can see how it would be very diluted in the dam, good point.
Totally agree with the mulching I'll attach some pics. The area so far, is about 3 acres. I actually do have the chips, lots of pine harvesting has gone on. That was my full intention. However that is a slow process  years and years. So whilst I will do that intermittently, we have been seeing green manure everywhere. So far about 2 acres is done. Much less time consuming! We have green now! Perhaps instead of worm tea. Compost tea in the totes? I do spray out seaweed tea currently.
Also a few days ago  I came across an awesome permie farm in NZ I'm going to contact them. They had feed bags full of compost brewing in a small pond, much smaller than ours. Let out a plug and it flowed down channels to the fruit trees. They had lived in South America. Cant remember the native peoples they learnt from. Will have to rewatch again.
I am trying to create systems with the least amount of effort, I guess like all permies.
Will update on if we go ahead or not. A combination is what I'm leaning towards now. Thanks again!
Lauren Clegg
Posts: 4
1
posted 1 year ago
Some terraces I've mulched. Some pine, some bluegum chips
20200527_121214.jpg 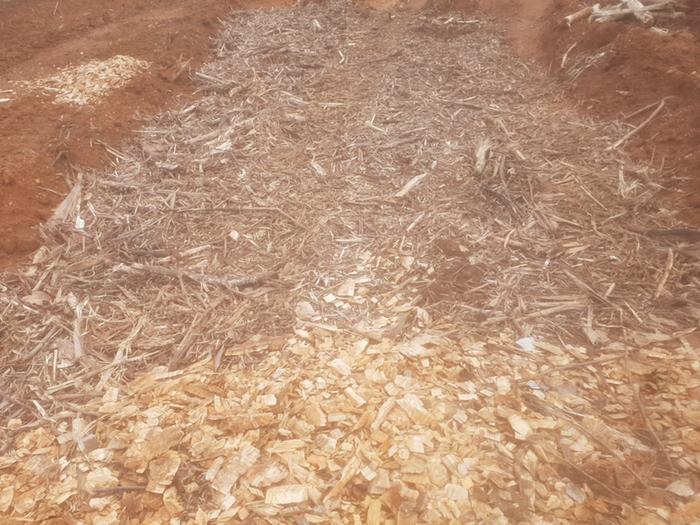 posted 1 year ago
Looks like you've done a lot already!

While I agree 100% with Marco Banks, especially with respect to perennial food systems, it may be helpful to add that earthworms and compost worms provide different functions: earthworms dig more deeply, aerating the soil and eating small scraps of plant matter and microorganisms. Compost worms live closer to the surface, eating leaf litter and larger pieces of food. Both provide increased fertility: Compost worms are especially useful for processing kitchen waste and leaf litter on a small scale, while earthworms are probably more what you need in your large-scale system. Depending on your climate, you may have both occurring naturally, but with wood chip mulch, you may not have as many compost worms joining the system to begin with. Also, compost worms won't occur naturally or overwinter outdoors if your winters are too cold. Sorry if I am mansplaining here. I'm pretty sure that this was what Marco was getting at, but I thought a little extra detail might be helpful

Because they don't dig very deeply, compost worms are a challenge to raise for larger systems. Doing this on a large scale requires lots of surface area. You can't do it in deep containers. If you do, other volunteers (like earthworms and black soldier fly larvae) may join your worm colony to work the lower levels - which isn't always a terrible thing, but not the system you were trying to create. So, scaling up your compost worm production depends on how much contained surface area you have to raise compost worms.

Making properly aerated worm tea is time and energy intensive. In order to get the most good from that time and energy, it should be used quickly, not be left to sit in warm temperatures for very long. Refrigerated it might last for 5 days, but the quality will be diminished with every passing day. In a pond, you may create algae blooms and low oxygen levels. Think of all the problems caused by nitrogen run-off in ponds. That's basically what we're talking about.

Honestly, I don't think I would bother with large totes of compost tea for your food forest. You have a large system. You would have to spend lots of time and money on large, flat boxes, aeration equipment, and electricity. If I were you, I would, instead, keep doing what you're doing. Sometimes simple solutions are better than complex ones.

In my small system, I don't bother aerating "worm tea" at all. I've tried and I can't stand the constant buzzing of the pump and the thought of all that electricity being used for what is, otherwise, a completely natural product. I simply dissolve my worm castings in water, filter out the seeds and stuff, dilute it and apply it directly to the kitchen garden. I can't vouch for the comparative efficacy of my method versus an aeration system, but it works for me.

Lauren Clegg
Posts: 4
1
posted 1 year ago
Thanks for your reply. Simple is definitely what I prefer! I had a little dig around where we have pla yed about 40 fruit trees green manure and sheep poo. There were actually plenty of earthworms hurrah! We have had rains though. In a previous area very hard pan clay they were present too but come summer who know where they go to hide. The dirt is super hard, like rock. The new food forest area seems much better black soil, of about a foot then the clay. Have deep ripped lines here too and added gypsum. I will continue with what you have said. And will keep up the small scale composting worm farm just for the veggie patch!
I have used home seaweed tea on all transplanted trees. I just stirred it a bit no airation I agree it seems a bit overboard🤷‍♀️.
Appreciate everyone taking the time to reply to me !