posted 8 years ago
Owen Hablutzel will be making several guest appearances in my upcoming podcasts. He is part of Geoff Lawton's PRI USA team. Plus a certified Holistic Management educator (Alan Savory's stuff) and keyline guy.

posted 8 years ago
From the above video. Posted with permission from Owen (who is looking over my shoulder as I do this).

The land on the left was a conventional cotton farm for 30 years and then abandoned for 20.

Then it was keylined. No seed was planted. The second picture is a year after keylining. 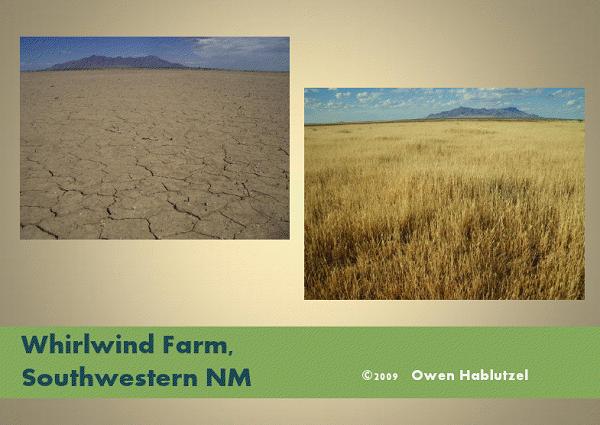 Sean Lloyd
Posts: 2
posted 8 years ago
Unbelievable what keyline can accomplish...and that nature's seedbank can be so patient and resilient waiting for its chance to make things right.
Ray South
Posts: 69
Location: Northern Tablelands, NSW, Australia
3
posted 8 years ago
Enjoyed the science, being a science geek, and found the example remarkable. Large areas around here are sodic (high sodium) granite soils and the farmers who work these lands (grazing for the most part) don't believe keyline has anything to offer. They say that earth works on sodic soils are a waste of time because they collapse, even swaling is not worth the fuel. Does anyone have any experience on such soils? I live on heavy clay and have no experience with these soils at all.
Varina Lakewood
Posts: 116
Location: Colorado
2
posted 8 years ago
Ray,
I won't swear to it, mind, but I'd guess that plot of land in the video is clay or clay loam, based on the fact that most of the soil near the Rockies is either granite decomposed or clay/clay loam, also alkaline and salty. For instance, in my much less salty garden, I'm still advised not to amend with sulphur because the salts will bind it up. (I live near the Rockies, rather north east of the site in the video.)
I know that one of the first permaculture vids I watched on youtube (not sure how I even got to it) showed putting in swales in Jordan, where the soil is literally turning to dust from mismanagement, then heavily mulching them and putting in on one side (windward? sunward? didn't say) many of the local forerunner (term? sorry, this is new terminology to me) trees as a canopy layer, and on the other side planting fruit trees and some others (mostly fruit from what they showed, but later said they put in more non-fruiting trees than fruiting trees) in descending layers, mimicking the forest shelter effect, then going down to bushes and shrubs. Within a year they had mushrooms growing under the mulch (they'd never seen them before, too dry), and in three years they had figs that were producing fruit, supposedly impossible in their high-salt soil (which freaked out the local officials). Tests revealed that apparently the mushrooms had pushed the salt away, desalinizing the area.
There should be no reason that one or the other of the techniques wouldn't work for you, but maybe you could try it on a small scale to see how it works? Naysayers who haven't tried a method, or have only tried half a method, should be taken lightly, but that doesn't mean their advice is worthless, either. Maybe a good soil analysis would be a good place for you to start, to see what you currently have to work with.
Ray South
Posts: 69
Location: Northern Tablelands, NSW, Australia
3
posted 8 years ago
Thanks Varina. I wasn't asking for myself but rather to see if there was any good information I could pass on to this farming group. Our region consists of areas of heavy, basalt clays and very loose granite soils. It is these granite soils that I was asking about. I live on the heavy clays so the issue of collapsing earthworks hasn't come up. I need to find out more from the people who live and work on these soils. And you were right, the place in the video is described as a clay desert very early on.
Ed Johnson
Posts: 86
Location: Durham region - Ontario, Canada - Zone 5
posted 7 years ago
On the topic of resilience science, in a more academic sense, I've found Thomas Homer-Dixon to be extremely relevant. I was fortunate enough to hear him speak at a climate conference in 2008 and have read "The Upside of Down", he's one helluva smart dude (and Canadian).

Bit of a tangent, but the thought came up while reading the thread...