posted 2 weeks ago
A friend's pet Banties have had to come and live at my farm due to circumstances. My friend isn't that well so her energy level is really only enough to come twice a week to look after them with minimal ability to do some of the necessary upgrades needed to give them quality of life during our wet winter.

Step 1 was how to keep their feed dry when they go to a separate movable dog exercise pen during the day. I suggested using a couple of salvaged buckets and made up the following feeder "cover" one evening. I thought I'd post the pictures here as it might give others ideas. So far it's been successful. It appears that they're actually wasting far less feed as they used to dump a fair amount on the grass where it was lost to the worms. It is light enough that I just pick it up in the evening and drop it into a garbage can so the rats don't come calling. It will be *really* easy to clean - the bowl comes out of the hole with room to spare and the bucket itself can then be sprayed off with a hose.

It has not been tested with a driving rain yet, but if the weather's too foul, they'll stay in. There will never be more than 6 to 8 birds in the day run, so I'm not concerned about them having to "take turns". For a lager group, it was easy enough to build that I would make a few of them.

Next up is how to "winter proof" the X-pen while still leaving it easy to move. 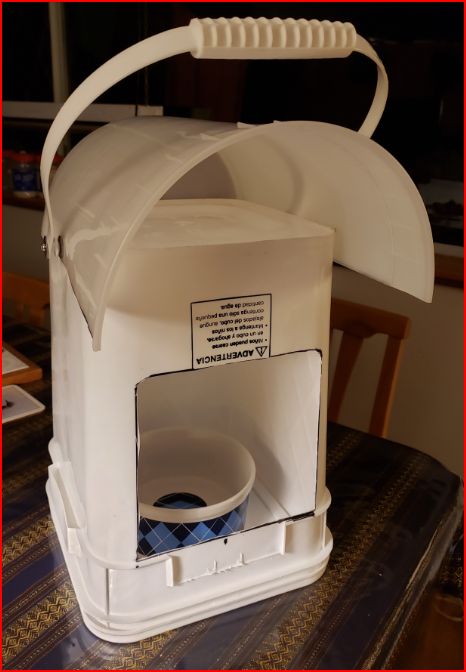 posted 2 weeks ago
I thought I'd post 3 pictures of other "covers" we use for keeping chicken feeders dry. They all have their place. Please add your own creative solutions.