Seeking to build an entire community of green homes

Eric McNeal
Posts: 1
2
posted 1 year ago
Hello everyone, my name is Eric and a couple years ago I finished building a 1600 sq ft off-grid earth bag house in the mountains of Ghana after relocating here from the US. Now I am exploring building up to 50 more similar to this one. However, the earth bag house is extremely labor intensive and takes so, so, so long. Therefore, I am looking to build an earth home that would be much quicker to build. Would the rammed earth homes using the forms be significantly faster? I would love to hear your ideas. Thanks!
WhatsApp-Image-2018-06-19-at-2.15.10-PM.jpeg 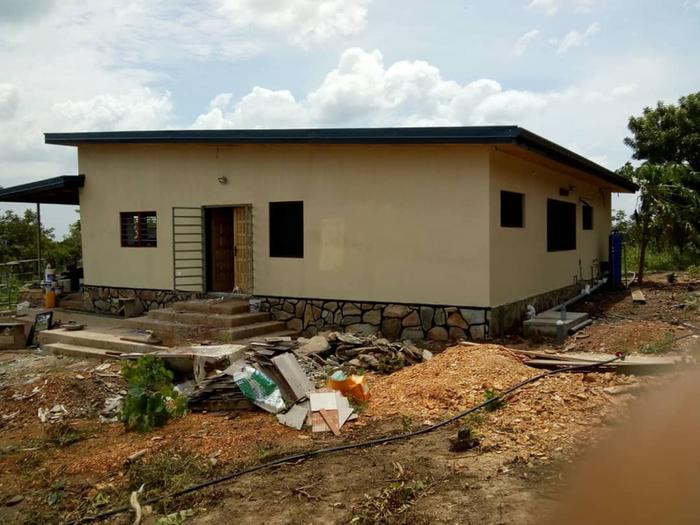 Rodney Wade
Posts: 4
posted 1 year ago
I would think rammed earth would be faster than the earth bags if you reused your forms and had plenty of labor.  I'm not sure your machinery available but a skid steer or loader can fill as fast as you can tamp.  That can be by hand, pneumatic tamper, or other means.  Speed wise....it's hard to beat stick built.  Templates can be made and you can produce factory like efficiency building panels.  Left wall, right wall, front and back then roof it.  If Snow and Roof load isn't a concern a simple 1 direction pitched roof can make it even faster.  Lots of ideas on mass production, but without know some more specifics it's hard to give any further advice.

posted 1 year ago
Hi Eric looking great your house!
Must have missed your post two month ago. A shame, too busy harvesting.
Did you think of trying a house made of strawbales? Maybe too termite sensitive in that climate though.
I am sure Dale Hodgins had a lot to say about building in Africa, because he had, he has left Permies though.
Maybe someone remembers. If i check his posts it was 200 pages, a bit much to go through.

posted 1 year ago
I've been around earth building processes for some 25 years now. Rammed earth is great but not fast. The traditional building material in my region is adobe earth bricks. When we resurrected the traditional rammed earth of our region, we thought it would be faster than earth bricks, but it turns out, .... that depends.

If you would have to mix and make the earth bricks yourself, then yeah, rammed earth removes the step of drying the bricks, turning them, and then building with them. But rammed earth takes much longer to dry than bricks do. Like, months. Here, dried bricks are available, so if you can afford it, bringing in loads of dried bricks and then building with mud mortar, only the mortar has to dry, and the whole thing gets built and dried much faster. Like, MUCH faster.

Rammed earth requires more precision planning than earth brick walls, which people adjust as they go. For example, with brick houses they start building, then stand the door and window frames in place when they reach the spot, and then build around them. Rammed earth frames can't always accommodate the parts sticking out of the sides of the frames so easily, so sometimes you have to keep a spacer in the rammed earth frames.

I know of two different kinds of rammed earth. Our school was mostly built using the ancient Himalayan type, which could even be called cob in formwork rather than rammed earth, because it is not rammed as tight as European style rammed earth. This type uses a wetter mix, with a slightly higher ratio of clay, and we consider it needs to be a bit thicker than the European type. It is rammed with wooden stampers, by hand. The European type uses a drier mix, with a slightly higher ratio of sand, and is either rammed much harder by hand, or with a pneumatic rammer. Being a drier mix, the walls dry faster. Having less water in the mix means the dried wall has less pores and more mass, is less insulating, and supposedly stronger even when thinner. Our old-style walls are plenty strong, though.

Later we started using the European style of rammed earth. If done perfectly it does not require any plaster or surface paint, but to be honest we never got the precision pre-planning mastered, so we always end up having to chip and repair, for pipes, electric lines and switch boxes, changes of plan, etc. I personally prefer the old style Himalayan rammed earth where you know you'll have to plaster, which allows changes and repairs.

The biggest labour is bringing and mixing the mud, so any of these methods may be about equal if the volume of the wall is the same. For the (wetter) Himalayan rammed earth, we use a diesel powered cement mixer, just a normal small sized one that I'm sure is also common in Ghana, not a big truck-carried one. For the (drier) European mix, I'm told the cement mixer didn't work so well and they had to make some kind of big flat mixer with paddles or something, I don't know. I'm not involved with the place that is doing the rammed earth building anymore so I don't know what they are using now.