posted 10 years ago
This was just so weird I had to share...

Cats away! Artist turns his dead pet into flying helicopter after it is killed by a car 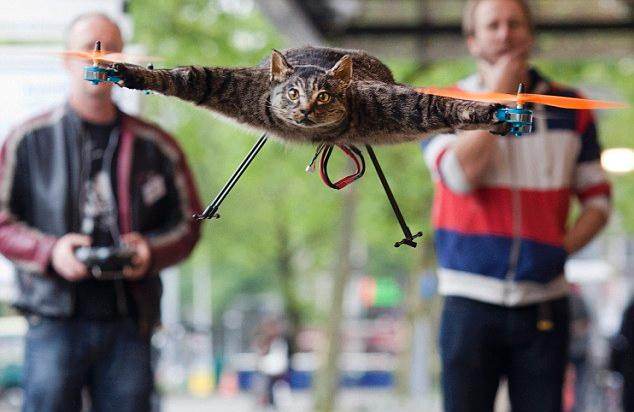 
Song about Orville, the cat helicopter:

Posts: 1748
Location: Western Kentucky-Climate Unpredictable Zone 6b
112
posted 10 years ago
Songbirds and Pidgeons falling from the sky - dead from fright ! Whats next - mounting a Saint Bernard onto a Harley frame ?

wayne stephen wrote:Songbirds and Pidgeons falling from the sky - dead from fright ! Whats next - mounting a Saint Bernard onto a Harley frame ?

quite possibly so...
Alex Freedman
Posts: 266
19
posted 10 years ago
This does give new meaning to "reuse".
Leila Rich
steward

Max Hubbard wrote:This does give new meaning to "reuse".

Max Hubbard wrote:This does give new meaning to "reuse".

Oh dear, the cat is definitely out of the bag.

This cat helicopter rates right up there with flying pigs...

ANd the idea for repurposing the St.Bernard for a Harley is great, too. It would give extra padding in case of a spill.

Posts: 1748
Location: Western Kentucky-Climate Unpredictable Zone 6b
112
posted 10 years ago
You could use the little keg around his neck as a gas tank. Lift the back leg to change the oil.

This website is a great idea for cat lovers and news hounds. News + kitties =

posted 10 years ago
Death is a strange thing.

I guess some people might be uncomfortable with the cat helicopter, but the cat was hit by a car, not killed to create the helicopter. I think that the owner of that cat, in his own mind, was honouring him by doing that. It's not what I would have done, but maybe we all have our own ways of paying tribute to our lost friends. Who are any of us to say which is the most appropriate way to dispose of a dead body? I was raised to believe that the best thing is for a dead person to be taken to a special place to be burned, at great expense, leaving all the work to be done by professionals. Now I'm in Portugal, death is much more hands on and I've had to prepare bodies myself, and sat up and watched over them overnight, not leaving their sides until they are safely buried in the local cemetery, knowing that in seven years they will be dug up again to make room for more.

How you treat your friends in life is much more relevant, in my opinion, than any 'rights and wrongs' about what to do with a body after death. It looked to me like that cat had a decent life and was much loved by his owner. If he'd been mine I would either have buried him or put him in the compost pile, either way making sure that he would once again have become part of the cycle of life that I am creating on my land. But I also have total respect for someone doing things differently.

Patrick Thornson
Posts: 147
Location: Zone Five, B.C., Western Canada.
posted 10 years ago
Let him compost away.
I understand that there's a trend toward 'greener' funeral/burial/composting coffins. Good.
The business of death should get greener too, eh? Not just greener options for babies , toddlers, etc, I mean.

MarcusZ Dawson
Posts: 1
posted 7 years ago
lol that is the funniest thing I have seen, gross but somehow hilarious at the same time. dont really know what to think.

I was thinking about doing something similar, I came across these interesting Carved Skulls , how about attaching one of those to a drone lol