I just wanted to share my most recent idea regarding the use of a cyclonic separator in a rocket stove or rocket mass heater for the dual purpose of creating a maximized secondary burn chamber that simultaneously separates and concentrates the wood ash into a convenient container for removal.

The way a cyclonic separator works can be gleaned from this video.  https://www.youtube.com/watch?v=tvVj6fx6MNI

Just imagine all the Time, Temperature and Turbulence involved here!

I was already intending to experiment with mixing shredded, loose ceramic fiber with refractory cement and cast it into firebox components, so, we will see how the material performs and hopefully, I will be able to cast an effective iteration of a cyclonic separator for my build.

I hope this piques someone else's interest as I would love to get some differing perspectives on how such a thing might perform.

Absolutely no metal in the firebox.  That is rule number one for me.  If you read a little closer in my post you will see that I intend to experiment with refractories to create the shape required to pull this off.  It's really just negative space.  Now, what I really want to know is how do you think it would work if the core exhaust is being dumped directly into this?  Let's imagine for a second that it's entirely made of high temperature ceramic fiber so heat is not an issue.  Let's talk about flow characteristics.

Posts: 3308
Location: Southern alps, on the French side of the french /italian border 5000ft elevation
165
posted 1 month ago
Hi Thomas. I had experimented with this "J tube" in the picture. What you might have not noticed, is the feed tube and burn tunnel of this one, goes into the gas canister tangentially. (to make myself real clear, perpendicular to the radius)  And the burn tunnel was cut straight at the centerpoint, (or radius intersection) not conforming to the gas canister's curve. What bill Pentz calls a "neutral vane" on his site. IIRC. This was an attempt at a cyclonic rocket. What i remember, when dismantling it, was the dimple in the fly ash, in the center.

I don't know if it worked "well" being untested with a combustion analyser. But it made the top of the canister, where the "heat riser was attached sag under it's own weight.

The idea behind this was, having an expansion chamber between burn tunnel, and heat riser, where the burning gases would have plenty of room to expand, and time to burn. And also  the flame would crash, more or less onto itself.

But you sure could use a cyclone to clean fly ash. If i had to do it, i would do as i did before, the burn tunnel, as short as possible, entering the cyclone, so the flames are still burning in the cyclone. That would gibe turbulence, time,and by insulating the cyclone, temperature.
And i would use a short double cone cyclone.

Like this, entering at the widest. Bellow the top cone. But i admit, this is just from gut feeling. To reduce the expansion chamber's size a bit. Not using a full cyclone, as per Bill Pentz's plans. 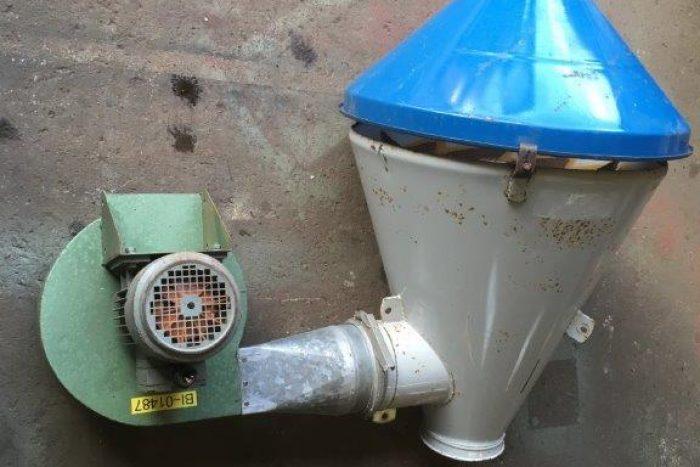 Thomas Tipton
Posts: 79
5
posted 1 month ago
I just looked at Bill Pentz's plans, but I didn't see anything there that resembled the "double cone" cyclone in your picture, though I was able to find some references to "inverted" cyclones that are fed from near the bottom of the cone.  An attractive feature since the natural tendency of the exhaust is to move up, but the design description noted the use of several blades on the inside surface to promote rotation.  I think I'm just going forward with the KISS principle and work out the cheapest way to create the negative space (which is all a cyclone separator really is) and line it with a smooth surface, high temp insulating blanket.  Prices for bulk ceramic fiber are depressing.  $102 for less than half a cubic foot (25 lbs) shipped has been my best quote so far.  Considering I was going to mix that with refractory cement to make it a moldable plastic,do you think it out of the realm of possibility that the volume of such a mix could be further expanded by the addition of perlite?  As this structure will not be bearing a load and only needs to resist heat and hold its shape.
Trev Ortex
Posts: 7
posted 1 month ago
These threads may be of interest: